News & Politics / Why Islamophobia is a threat to all people 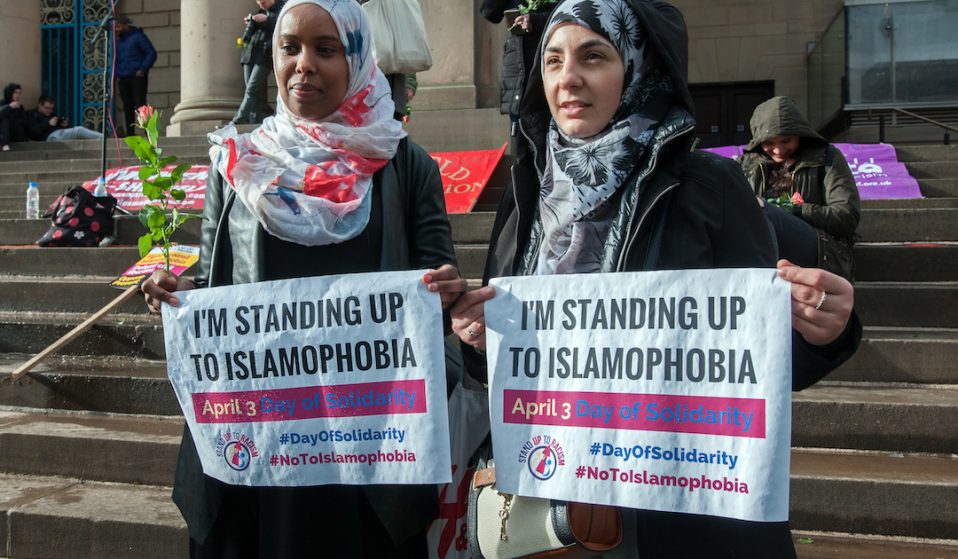 Author Suhaiymah Manzoor-Khan discusses her new book exploring the way that Islamophobia is woven into our everyday lives.

Author Suhaiymah Manzoor-Khan discusses her new book exploring the way that Islamophobia is woven into our everyday lives.

Many of the conversations around Islamophobia tend to focus on the individual. This might be Muslims experiencing microaggressions in education or healthcare environments, or dealing with offensive slurs on the street. But as Suhaiymah Manzoor-Khan argues in her new book, Tangled in Terror, Islamophobia forms a part of a much bigger picture of discrimination and violence that faces our society today.

Through illuminating and incisive arguments, Manzoor-Khan frames Islamophobia as a structural and systemic issue that’s woven into many parts of our society, including at our borders and in prisons, but also in education, healthcare, and work settings.

Huck spoke to Manzoor-Khan about how the conversation around Islamophobia needs to change and how it’s not only a problem that concerns Muslim communities, but an urgent issue impacting each and every one of us.

What was the thinking behind the book’s title?

I didn’t want to make it into some sort of trope. I realised that all these concepts I write about are tangled within each other. The entire apparatus that’s justified by Islamophobia is this web that you can get tangled in so easily. Tangled in Terror was also this play on words in that the terror that you get tangled in is the terrorising mechanisms of state powers and corporations.

You mention in the introduction of your book that Islamophobia is not necessarily about Muslims, which may surprise many readers who have become accustomed to seeing it discussed synonymously with Muslims. Why do you think this is?

When we think of Islamophobia, I think a couple of things tend to happen. There’s an instant sense that this is something that is a Muslim problem and so we can relegate it to just being the concern of Muslims. And I think in a way that keeps resistance or conversations about Islamophobia to a really small minority of people.

And so, in framing it as something that actually has nothing to do with Muslims, the connection that I was trying to make was that if we take Islamophobia as a narrative that basically uses the figure of the Muslim – rather than has anything to actually do with the reality of Muslims – we can then see that it’s a narrative that exists for a purpose. Islamophobia is a tool that is used for the benefit of security industries, states, borders, and policing.

The harm that Islamophobia causes Muslims is of course important and pretty central to the book, but I do think we become misdirected when we focus it entirely as a Muslim problem. This narrow focus means that we miss the kinds of policies and processes that are being enabled and justified through the idea of a Muslim threat, but are in fact harming every single person.

Many of the chapters in your book discuss Islamophobia as a systemic and structural issue, which is not always reflected in the conversations being had around Islamophobia. Why is it important we move away from discussions that centre individual awareness and culpability?

The work that people are doing around defining and raising awareness around Islamophobia has its place of course, and we do live in an unjust justice system where we believe that the highest form of protection that we can seek against violence is through the state, the government, and the law. They all become the arbiters of protection for us. And so, I understand why we have these conversations, because you can’t say I’m being discriminated against due to Islamophobia if you don’t have a definition for it.

But to me, I think my horizon is much broader because I don’t believe that the state can ever be the arbiter of protection from this violence; a violence that it is actually the perpetrator of. The reason I choose to look at Islamophobia as a systemic issue, framed in a historical and structural narrative is because this is the only way we can really deal with Islamophobia.

Defining something won’t tackle the root causes of that problem. It’s almost become a distraction from the deeper conversations that we should be having. We need to go deeper, to connect Islamophobia to all of these things, and to not have the highest form of safety and justice be what the state is willing to grant me under their laws and their definition. That’s not liberation or justice.

Do you think the multifacetedness of Muslim communities tends to be forgotten or dismissed when we talk about Islamophobia, and the issue generalised?

Yes, definitely. In Western contexts especially, Muslims are primarily the figures that we see in the media and tend to be represented as either South Asian or Arab. And so, we think that it’s Islamophobia that affects these communities but what about Black Muslims or Muslims of other ethnicities? This is why we cannot talk about Islamophobia without also talking about other forms of prejudice and discrimination, because they’re all connected to each other. A Black Muslim is experiencing an intersection of both anti-Muslim racism and anti-Black racism, but they’re not two separate racisms. They are in fact born from the same origin, which is white supremacy.

And for me, what’s really important when we talk about white supremacy is that we also talk about colonialism because a system of racial hierarchy is built to justify domination and subjugation of other people’s lands, ideas, and cultures. And so yes, there is that erasure that occurs, but that erasure also plays a part in helping to cloud and obscure Islamophobia. This is why we see so many having conversations around Islamophobia and how to define it, it’s this deliberate clouding of what it is instead of talking about Islamophobia’s roots in white supremacy and colonialism.

There is this underlying assumption that the factors that are oppressing women, in general, are one thing but the factors that oppress Muslim women are simply their own religion and Muslim men. And I think that’s where there can be no productive conversation, because you’re essentially victim-blaming by placing the blame for the violence and injustice that Muslim women experience within something that you also associate with them. It basically says the only way to be free is to free yourself of your religion.

The heartbreak that I’m left with as a Muslim woman is that the most hidden impact of these reductive narratives is that Muslim women have so little space to hold the nuance of being able to say yes, perhaps I have experienced injustice or gender-based oppression at the hands of Muslim men. Because as soon as you utter that, it becomes a tool to justify and reinforce surveillance of yourself and your own community due to this perceived inherent violence. Muslim women are unable to have conversations about the fact that we may face oppression on all sides. Instead, you have to cover up for patriarchy that may exist in and amongst the people that you love because you don’t want to put them at the heart of state violence or play into dangerous tropes that are then used to justify deporting us or stripping our citizenships.

You’ve always talked about disrupting the commonly held views of history and violence when it comes to resisting the conditions of our society. Why is this disruptive form of resistance so important to our collective liberation? And what are your hopes for this book within that disruption?

Disruption is a really important first port of call in any movement to lead us towards resistance. We naturally take things for granted. We assume the police and borders keep us safe. But as soon as somebody names that thing and says actually borders are incredibly violent and they harm people, then that causes people to at least stop and think and potentially disrupt your understanding of the world. And most importantly, it can make you start asking questions. Knowledge is what mobilises and galvanises people to change their material conditions.

My hope for Tangled in Terror is that it generates conversations and disrupts the narrative both about Islamophobia and about Muslims. As people who seek justice, as people who want an ethical world, and as people who deserve to live free from harm, this world is simply not enough. Islamophobia does not stand on its own. All oppressions are interconnected. You can’t surgically remove Islamophobia, there’s a whole system that it’s part of.

Tangled in Terror is released 20 March and is available to pre-order on Pluto Books.

Linkedin
RELATED ARTICLES
OTHER ARTICLES
Planet Ardbeg is a 40-page sci-fi anthology created by three cutting-edge artists.
The hate Just Stop Oil faced after throwing soup over a Van Gough painting has been immense. Here, they explain why it won’t deter them.
A new exhibition brings together 150 works by twelve photographers, offering mesmerising and intimate depictions of life.
After being subject to racism growing up, Kavi Pujara’s photo series allowed him to reconnect with and reimagine his hometown.
The Egyptian government are continuing the repressive mistreatment of environmental campaigners.
Photographer Ira Lapu documents the lives of ordinary Ukrainians living amid a brutal conflict.