News & Politics / Why young people are turning to platonic marriages 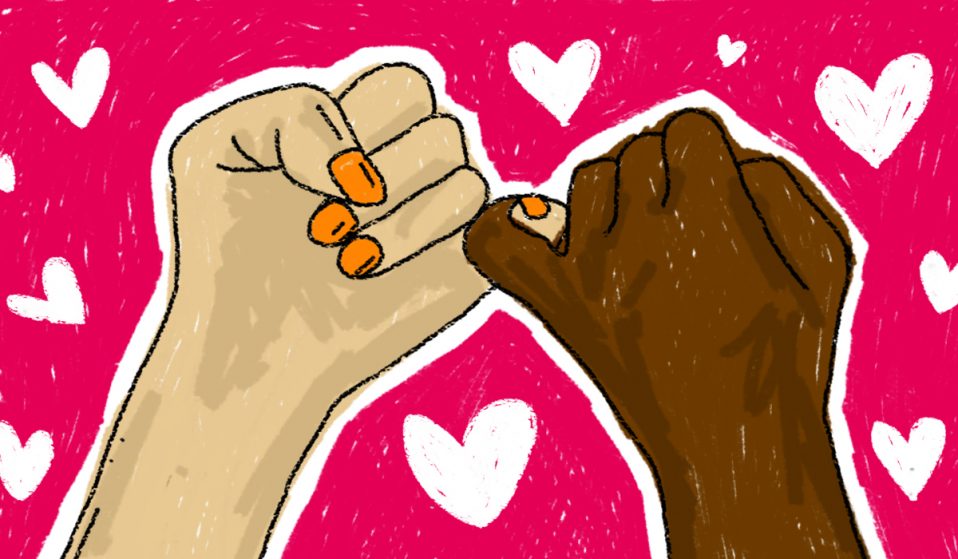 As the role of the nuclear family is increasingly called into ​question, people are finding new ways to exist outside heterosexist norms.

As the role of the nuclear family and romantic relationships in modern society is increasingly called into ​question, people are finding new ways to exist outside heterosexist norms.

In November 2020, after nearly ten years of friendship, Jay, 24, married her best friend, Krystle. “We want to raise kids the same way, and have the same ideas as to what finances should look like,” says Jay. “We are already symbiotic in how we work.”

For Jay, a platonic life partnership with Krystle “just made sense” – their friendship had been filled with nothing but “companionship, love, laughter and adventure”. As she puts it: “There’s no reason to keep on waiting to hopefully find a partner who is going to align with all those things that also happens to be romantic and/or sexual in nature when it just made sense to start building the life that we wanted to live together.” In this respect, Jay and Krystle are part of a growing number of young people who are ditching conventional matrimony and, instead, hitching their best friends.

Typically, platonic marriages are viewed as “a legal union based on spiritual connection or practical love, rather than on sexual or romantic love”. On TikTok, Jay explains that her marriage is just as fulfilling as a romantic one. “We work together, we are partners, we make decisions together,” she says. Jay notes that while she and Krystle have complete freedom to seek out romantic and physical relationships, she also says that “the love that we have, the trust, the laughter, the shenanigans – it’s all I could ever ask for in a marriage”.

While there aren’t any definitive statistics about the number of best-friends marriages, the New York Times suggests that a growing number of communities on Reddit are devoted to openly discussing platonic life partnerships. Many of these users also define themselves as ‘asexual’ and ‘aromantic’, suggesting that platonic marriages could be more common than we may think. “I may have never felt any sort of attraction besides platonic, but that’s okay. I’m learning to accept it,” Reddit user aroace posted in the r/asexuality subreddit. “I love the fact I will never have to deal with relationship drama. And maybe – just maybe – one day, I’ll end up traveling and enjoying life, along with a lovely person I can call my closest friend”.

Sarah Wingrove, 26, is a postgraduate researcher and also the child of a platonic couple: her mum, dad, and her dad’s wife, who she refers to as her “auntie”. Her mother, alongside Sarah’s older sister, moved in with her dad and auntie and their three children in the ’70s. After the death of Sarah’s sister, who passed away when she was six months old in 1990, her mum and dad – although best friends – decided to have a biological child and raise them in a triad of parents with her aunt.

“From all they’ve said to me over the years, it just felt right at the time and has continued working the whole time since. Raising five children is a bit easier with three parents around,” Sarah says. “There is a third perspective when making big decisions, and more support, both emotionally and tangibly, when things go awry. And each of them always has a companion to do things with.”

But platonic marriages aren’t just for asexuals and aromantics. Some suggest that best-friend partnerships are the most viable way to ensure economic stability whilst buying properties, and/or raising a family. “We’re committed to investing in one another so we can both be successful, and ultimately, we love each other so much,” says Dene Brown, based in Ohio, who married her best friend Kema Barton in late 2020. Marrying just before Dene had her second child, the friends decided to build a future together and raise their children as brother and sister. In the United States, marriage offers myriad privileges like tax breaks, and for many, eradicating the potential instability of a romantic relationship when it comes to finances seems like a safe investment.

Likewise, Sarah says that “the legal institution of marriage does also offer a lot of security which unmarried couples, two friends or platonic life-partners living together don’t have access to”. By getting married to a platonic life partner, this gives these family units “stability in the eyes of the law when the law still doesn’t facilitate alternative family dynamics,” she says.

Beyond offering financial and familial security, many young people in platonic marriages are radically reconsidering society’s obsession with romantic love. In a TikTok, Jay asks why is it that “romantic love is the be all and end all and seen as the only foundation of a family and a connection between two people?”. Dating amidst a rampant hookup culture has caused a growing number of young women to reconsider their desire for a romantic relationship, with some becoming disillusioned with the idea of love altogether.

“Some people may not want to get married to a romantic partner,” says relationship expert Amie Leadingham. “They want stability with a partner they trust and more flexibility in their lives. I think this is a great solution for those that fall into that category.”

While a recent wave of Twitter discourse about “family abolition” appeared to confuse many, the idea’s core premise is merely a resurgence of an age-old conversation about the role of the nuclear family and the romantic relationship in modern society. In March 2020, the Atlantic published a piece by writer David Brooks titled “The Nuclear Family was a Mistake”, in which he argues that “the family structure we’ve held up as the cultural ideal for the past half century has been a catastrophe for many. It’s time to figure out better ways to live together”. As the Covid-19 pandemic saw the formation of thousands of Mutual Aid groups, family abolition’s call for the redistribution of maternal labour and care was an approach that many communities were already embracing.

Sophie Lewis, author of Full Surrogacy Now: Feminism Against Family, imagines a future in which the idea of “surrogacy” becomes metaphorical, and we no longer care for each other in “private units” or nuclear households, “but rather within larger systems of care that can provide us with the love and support we can’t always get from blood relations”. Lewis suggests that nuclear households “create the infrastructure for capitalism, passing wealth and property down family trees, concentrating it in the hands of the few at the top of our class hierarchy”. She also notes that “maintaining the traditional family structure over time has also meant exploiting people of colour and disowning queer children”.

Crucially, Lewis’ feminist utopia envisions a world where the very idea of family is no longer contained by nuclearity or biological tie; instead, “it has become more wild, more abundant, and less constrained”. The platonic marriage, centred around similar ideas of kinship and the redistribution of care as labour, embodies many of Lewis’ ideas for the future. Queer people and their chosen families are already indicative of this new model of “open-source, fully-collaborative gestation”.

Sarah explains that since finding her own queer community as a young adult, she and her friends have often talked about raising families communally and living together. “The ‘2.5 kids, a partner and a house’ version of adult life is generally becoming more inaccessible and less desirable, especially for those not born into wealth or successfully pursuing the capitalist ideal,” she says. “As more people understand that they don’t have to exist within heterosexist norms, I think the creation of family units outside of these paradigms will become more common. More of us are realising that you don’t need a romantic partner or even children to live a happy and fulfilling life.”

As conceptions of ‘the family’ begin to veer away from the traditional nuclear structure, our understanding of what a loving relationship looks like is also evolving. As Sarah says: “I think, though, whether you get platonically married legally or not, if it means you get to curate the existence you need with the people you love and trust, every second of it is worth it”.

Linkedin
RELATED ARTICLES
OTHER ARTICLES
Thousands attended the annual event this year to wheelie through the city and call for ‘knives down, bikes up’.
Rogue landlords are exploiting young and inexperienced renters and leaving them in mental and financial turmoil, reports Niall Hignett.
Sean Maung’s photos are a love letter to the Black and brown communities that make up New York.
Rhiannon Adam spent three months capturing an ageing society wracked by division, isolation, and the aftermath of scandal.
Financial turmoil is pushing people who work in the sex industry into more dangerous and desperate situations as a means of survival.
A 37-year-old woman shares how her abortion led her to become a clinic worker, and the abuse she’s received in that role.