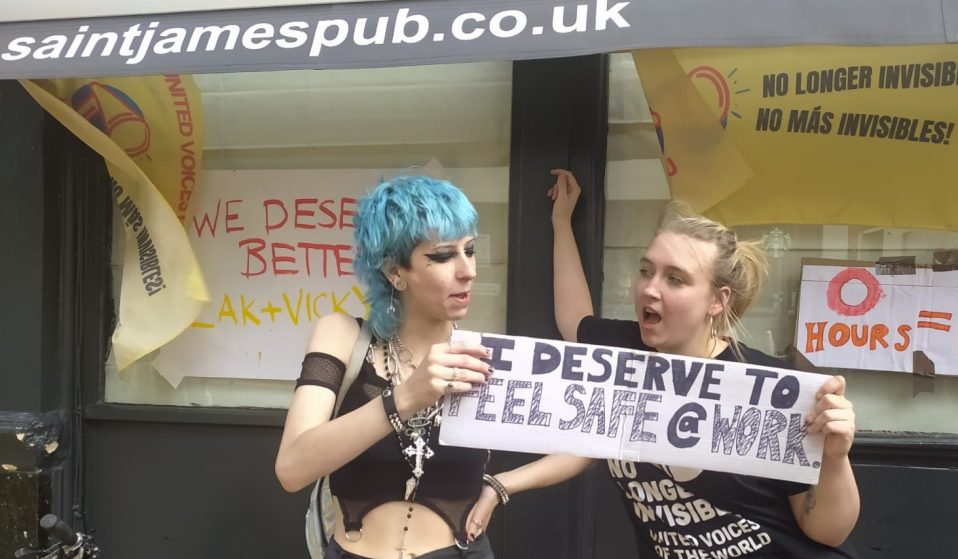 Queer spaces are vital for LGBTQ+ people to find community, safety and a place to express themselves freely – something that has become even more acutely felt in the face of closures. Even before the pandemic wreaked havoc on the hospitality industry, London had lost nearly 60 per cent of its queer bars, clubs and cafes in the space of a decade. This throws into stark relief just how important it is that the people who make these spaces what they are – the workers – are treated fairly. And it seems that finally, workers in queer spaces are taking things into their own hands by demanding better pay and working conditions.

“While it’s obviously exciting to be a part of this change, it’s devastating that it hasn’t happened sooner,” Eli Stahl, a worker at Dalston Superstore, tells Huck. The legendary London LGBTQ+ venue recently became the first-known queer space to unionise in the UK, following conversations between staff around issues with pay, security and discrimination.

Despite a historical track record of solidarity between the LGBTQ+ community and trade unions – such as with the Lesbians and Gays Support the Miners group, which was developed in 1984 to support striking minors – queer workers are still massively underrepresented within trade unions. This has a direct impact on their rights: research by the Trade Union Congress (TUC) published in June found that one in five workplaces do not have any policies in place to support their lesbian, gay, bisexual and transgender staff at work, and only one in eight monitor their LGBTQ+ pay gap. Amid a summer of strikes, spurred on by the media frenzy around the National Union of Rail, Maritime and Transport Workers’s (RMT) latest strike and a cost of living crisis, it’s no surprise more workplaces are unionising. But why has it taken queer workers in LGBTQ+ spaces so long?

Eli believes this is down to the fact that most queer spaces are also hospitality venues – another vastly underrepresented industry in trade unions. “I think a lack of tradition when it comes to unionising in hospitality [prevents workers from unionising],” they say. However, they add, there are some issues specific to queer workers that also factor in.

“I think we find a lot of power in a community, but I think a lot of us have had bad experiences and trauma around not having power, not being listened to and not being taken seriously, and this is something that is replicated within the workplace,” they say. “A lot of the power structures you have in society are replicated within these venues – even if it is a queer space.” As you go up the ladder of command, Eli says, the closer the “proximity to privilege”, meaning that often trans, BIPOC, and female workers are still likely to be discriminated against. But, they add, “that is why it’s so important for us to unionise”.

The extent to which society’s power structures are replicated within the workplace was exposed recently at Brighton’s St James Tavern. While not explicitly a queer venue, workers say they definitely class the pub, which is located in the middle of Kemptown, Brighton’s gay area, as an LGBTQ+ space. Despite this, non-binary members of staff have allegedly faced discrimination from the owners. “When I came out to the owners via text, stating my pronouns (they/them) and the shortening of my birth name to be used, their reply was with acceptance, saying they will comply moving forward,” Tris tells Huck. “But the next day, they wanted to fire me.”

If you missed the St James Tavern strike in Brighton on Saturday, which shut the pub down again and had the union busting bosses running, here's a short video put made by one of the workers' supporters. We'll be announcing new strike dates soon so stay tuned! #sjtstrike pic.twitter.com/can5FycmXq

Tris’s experience isn’t uncommon. Research from LGBTQ+ charity Stonewall from 2018 found that almost one in five LGBT staff had been the target of negative comments or conduct from work colleagues in the last year due to being LGBT, while one in eight trans people had  been physically attacked by customers or colleagues because of being trans. On top of this, almost a third of non-binary people and one in five trans people said they didn’t feel able to wear work attire representing their gender expression.

Although Tris’s manager defied the owners by refusing to cut their hours, Tris still experienced discrimination in the form of the owners using their deadname and the incorrect pronouns. “Any time I tried to correct them they’d reply with an unenthusiastic apology or ‘whatever’,” they say. “These are the people I am making money for and I deserve to be treated like a human.”

This, combined with issues around irregular and precarious zero-hour contracts, low and inconsistent pay, and health and safety concerns, caused the St James Tavern workers to unionise under the United Voices of the World (UVW) union and ballot unanimously for strike action, with workers walking out for 20 days in total between July 23 and August 29, including across Brighton Pride weekend and the August Bank Holiday.

“We never really wanted to go on strike,” says Jake Marvin, a manager at St James Tavern. “We came forward with our initial list of demands – a living wage, a response team in case there was an incident with a customer, for example – in August 2021. We asked them to negotiate with us, but nothing happened. Then we asked again, after a turnover of staff due to some of the harassment I mentioned earlier, but still nothing changed. It got to the point where we’d given them enough.”

Responding to these allegations, St James Tavern said: “The staff are in breach of their employment contracts on so many things.  No staff lodged any grievances, despite being sent the Grievance Procedures and being asked to do so also by our HR specialist. This was an opportunity for them to discuss any issues they may have but of course, they been told by the union […] not to turn up to fix any issues. There are outstanding investigations with regards to the union with regards to their procedures […] We have not broken any laws; all staff paid are minimum legal wage, sick pay and holiday pay”.

While eyes rightly on RMT now, expect a lot more of this in 2022: bar staff at St James Tavern in Brighton are on strike today demanding better pay, conditions & respect at work. They want £11.50 an hour. Believe this is first @UVWunion strike outside London. Via @maggieannehayes pic.twitter.com/2oMis052hU

While Dalston Superstore workers aren’t planning to strike anytime soon, their decision to unionise was still vital, not least because it has inspired other LGBTQ+ hospitality workers to follow suit. The Glory, another London gay bar, decided to join Unite and are currently working towards recognition. “Seeing the work Dalston Superstore have done to come together and improve their working conditions has definitely inspired us and allowed us to see that it is possible to incite positive change ourselves,” says Ashley Humphreys, a worker at The Glory.

“The rapid decline in this country’s economic situation is frightening for all of us […] it’s hitting those of us in lower income demographics hardest whilst we are receiving no support,” she adds. “These pressures have made it long overdue for us to be taking actions into our own hands to protect ourselves.” According to a YouGov survey commissioned by LinkedIn, the pay gap between LGBTQ+ people and heterosexual workers currently sits at 16 percent, equivalent to £6703 less every year, and research from 2015 found that LGBTQ+ people are more likely to receive state benefits such as income support and housing support.

With inflation now hitting a 40-year high of 9.1 per cent, it’s little surprise that many workers have reached a breaking point. “The cost of living is skyrocketing but this hasn’t been reflected in how much we earn, so we are pushing for all of our staff to at least be earning the recommended London Living Wage,” Ashley says. “We hope to add to the domino effect that venues like Superstore have also been a part of to create a culture of living wage being the standard baseline pay rate in the city, as opposed to that of being recommended.”

Ashley adds that Unite being part of the Get Home Safe initiative, which aims for businesses to be able to expense taxis used by staff before 9pm, was also a big factor in choosing the trade union. “I feel this is particularly important for queer venues to offer their staff, as hate crimes are on the increase and the media are continuing to push anti-trans propaganda,” she says. According to Home Office figures, homophobic hate crimes have risen every year in England and Wales from  8,569 in 2016/17 to 17,135 in 2020/21. Hate crimes against transgender people have jumped from 1,195 to 2,630 in the same period.

Mike Jackson, one of the founding members of Lesbians and Gays Support the Miners, tells Huck there are three reasons why everyone should join a union: firstly, protection at work when you run into personal difficulties; secondly, collective bargaining power; and thirdly, solidarity. “Above all, it was the solidarity which LGBT+ workers gave to the striking miners back in the eighties that in turn caused the trade union movement to adopt LGBT+ rights at work,” he says. “In time, that led to a Labour government enshrining those rights in the Equalities Act. But those rights can be taken away, so we need to be eternally vigilant to ensure that does not happen and the best way to do that is to join a union.”

While this first wave of unionisation of LGBTQ+ venues is undoubtedly a good thing, Eli notes that it is only the beginning, and there’s much more work to be done. “This is very much needed,” they say. “And it hasn’t really been a thing until now, and it needs to be a bigger thing. We’re nowhere near where we need to be in terms of queer people unionising.”

Linkedin
RELATED ARTICLES
OTHER ARTICLES
Protestors gathered outside Downing Street following the latest atrocities committed by Israel against Palestinians living in the besieged strip.
Photographer Bud Glick recounts documenting everyday life in the area, and what it taught him about the Chinese immigrant experience.
Yesterday, rail workers came together to protest poor pay, working conditions and job cuts in their latest round of strikes.
With the virus now a global health emergency, we must take steps to fight misinformation and demand a swift UK-wide vaccine roll out, writes Phil Samba.
From the chip shops, to the bingo parlors and burlesque dancers, photographer Mike Coles remembers capturing scenes of holidaymakers by the English coast.
Last week, Tower Hamlets council removed its nudity-restricting licensing conditions in a huge win for London’s kink community.