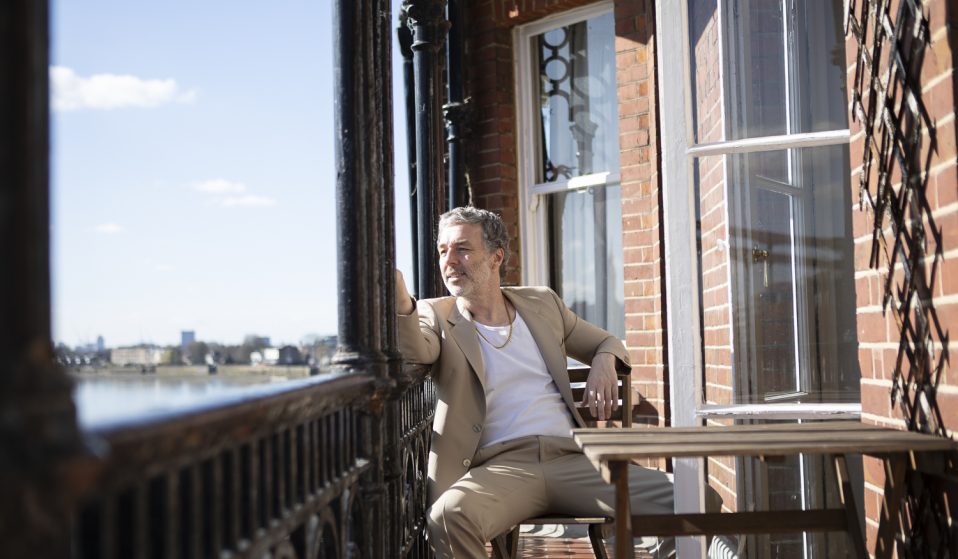 The London musician invites Huck into his bolthole by the river: a loud, eclectic property with a unique past.

In a new series, we interview people in – and about – their personal spaces, in a bid to find out why they mean so much to them. In the first instalment, Baxter Dury invites Huck into his London bolthole: a loud, eclectic property with a unique past.

A version of this story appears in Huck 73: The Sanctuary Issue. Get your copy now, or subscribe to make sure you never miss another issue.

“There are quite a lot of gentle, posh folk living in this block, but we are the mavericks,” says Baxter Dury, talking from his roomy Hammersmith flat that overlooks the Thames. “Historically, we’ve been causing a lot of noise here for 40 years. We’re the noise subversives.”

The London-born musician has been living in the apartment for a few years now, but it’s a property that has been in the family for four decades. His father, Ian Dury, first moved here to spend more time with the Stiff label family, touring with the likes of Elvis Costello and Nick Lowe, as well as his new band, The Blockheads. As a kid, Baxter found himself split between a sleepy Hertfordshire vicarage with his mother (the artist Betty Rathmell) and the bohemian mad- house where he finds himself again today, following a brief relocation.

Dury’s new album, The Night Chancers, is a journey through London’s underbelly. The follow-up to 2017’s critically acclaimed Prince Of Tears, it’s a dissection of gurning carousers and temporary best mates, the “failed fashionistas”, “Instagram voyeurs” and “jilted Romeos” Dury meets on his itinerant adventures in the city. With all that’s happened since its release, we may soon come to feel nostalgic for the debased characters he writes about. 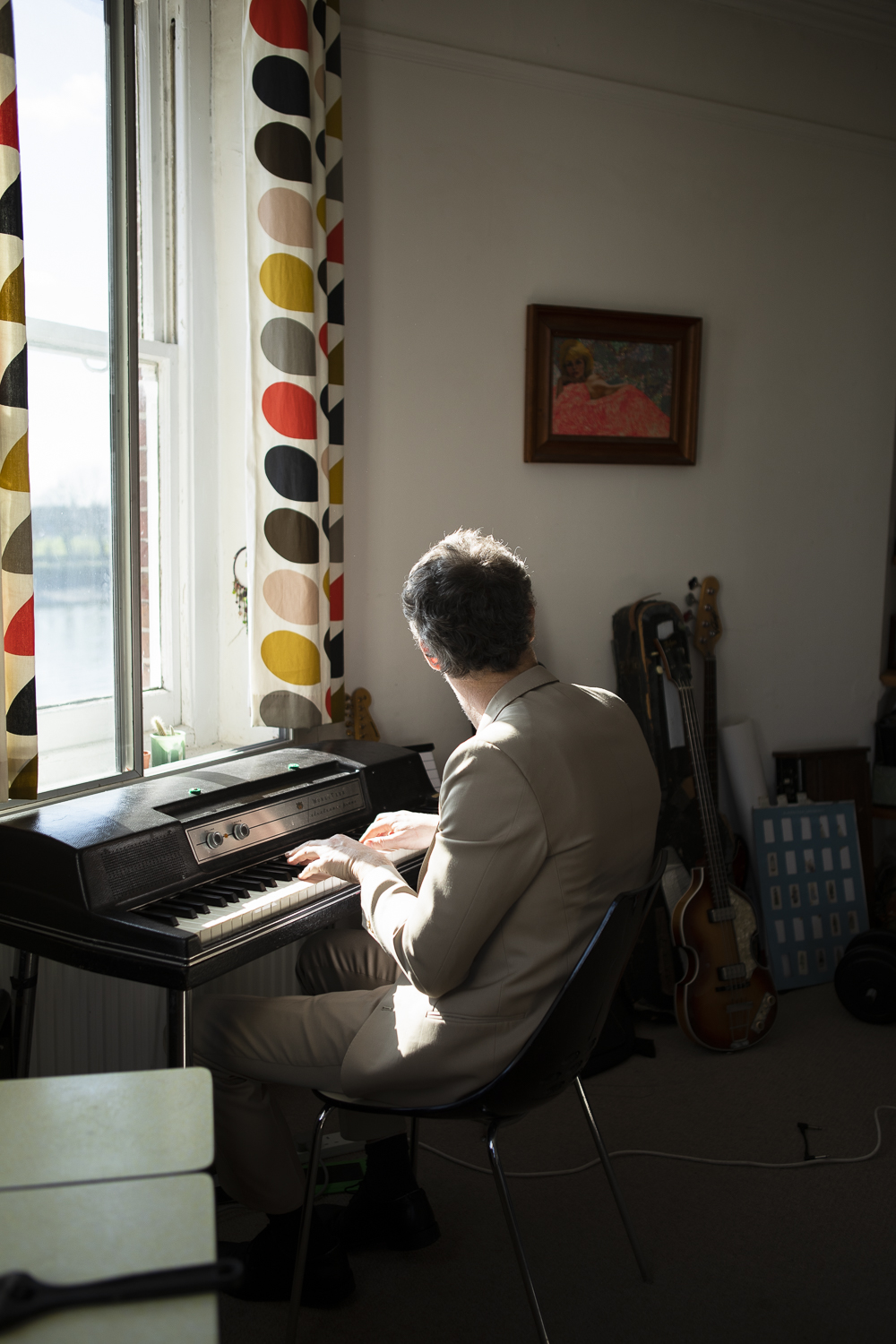 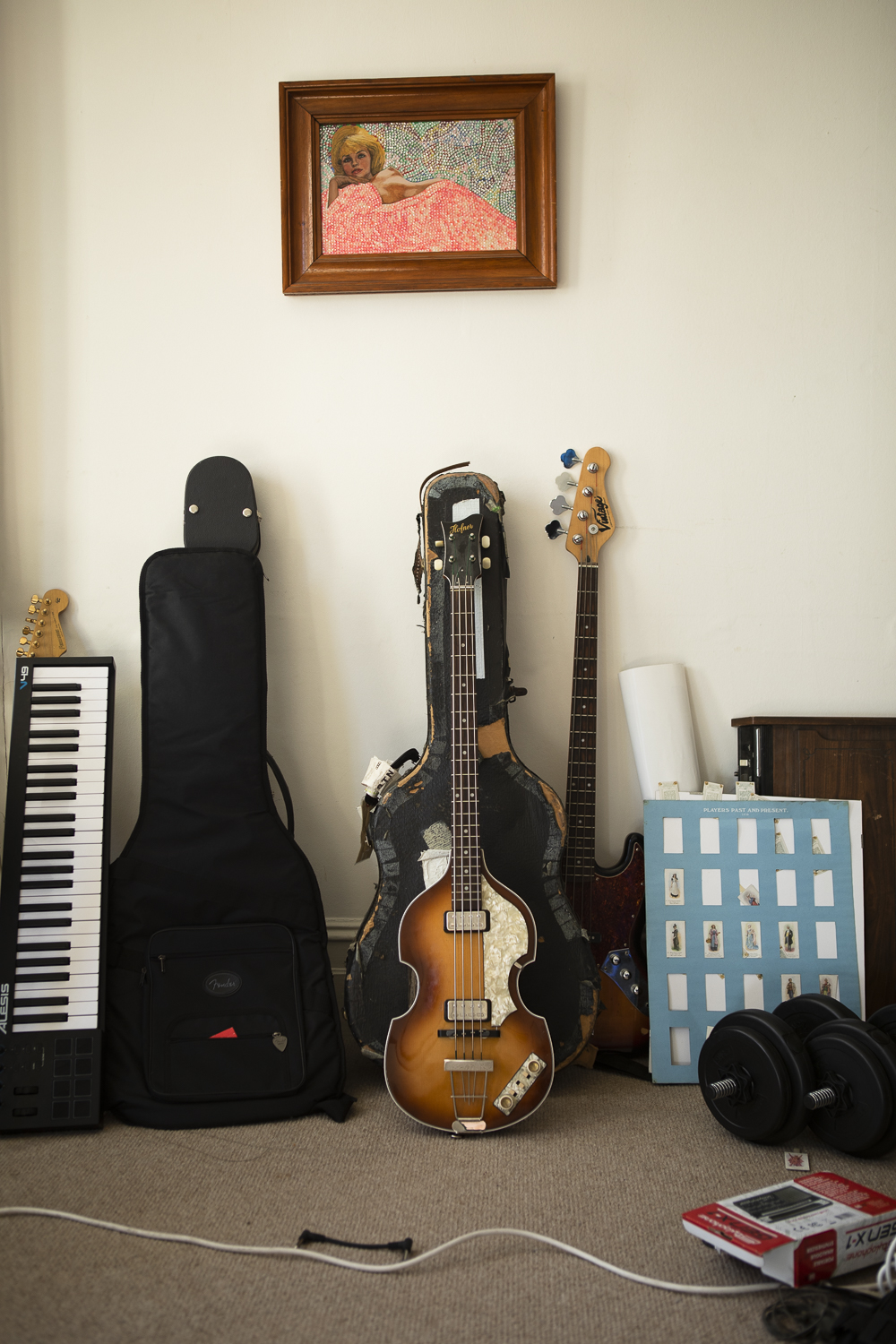 Dury acknowledges, at the time of writing, that it’s a “weird time” to be bringing a record out. But it means he will get more time to finish the book he’s working on – an “unreliable memoir” that’s already overdue at the publishing house – as well as more freedom to write and record in the studio based out of his home. “There’s a rotating bunch of old, asthmatic-looking instruments made out of bakelite, which would probably be really dangerous if you left them on overnight. I have a Wurlitzer and a Rhodes,” he says, pointing out his two electric pianos. “And there’s an ARP synthesiser which belonged to The Clash. It was on ‘Bankrobber’, and things like that.”

Dury usually makes his albums at Hoxa in West Hampstead, though germs of ideas and musical flatbeds begin life here in the flat. His shelves are cluttered with musical and non-musical ephemera: bongos, pedals, an old Korg and mixer, a small flight case, a tatty game of Scrabble on top of a pile of papers. None of the instruments are nailed down, meaning he can work at his Wurlitzer at the window, or move from room to room to help enliven creative impulses. “That’s the only bad thing about having stuff at home. There just isn’t that separation. I like getting up and going somewhere for a coffee and all that sausage-system behaviour. Otherwise you meander in this amber-glowing lava lamp-type lifestyle and everything merges into a Sunday and a Tuesday with soaked-candle mornings. I’m not that guy, I’m quite conservative in my approach.” 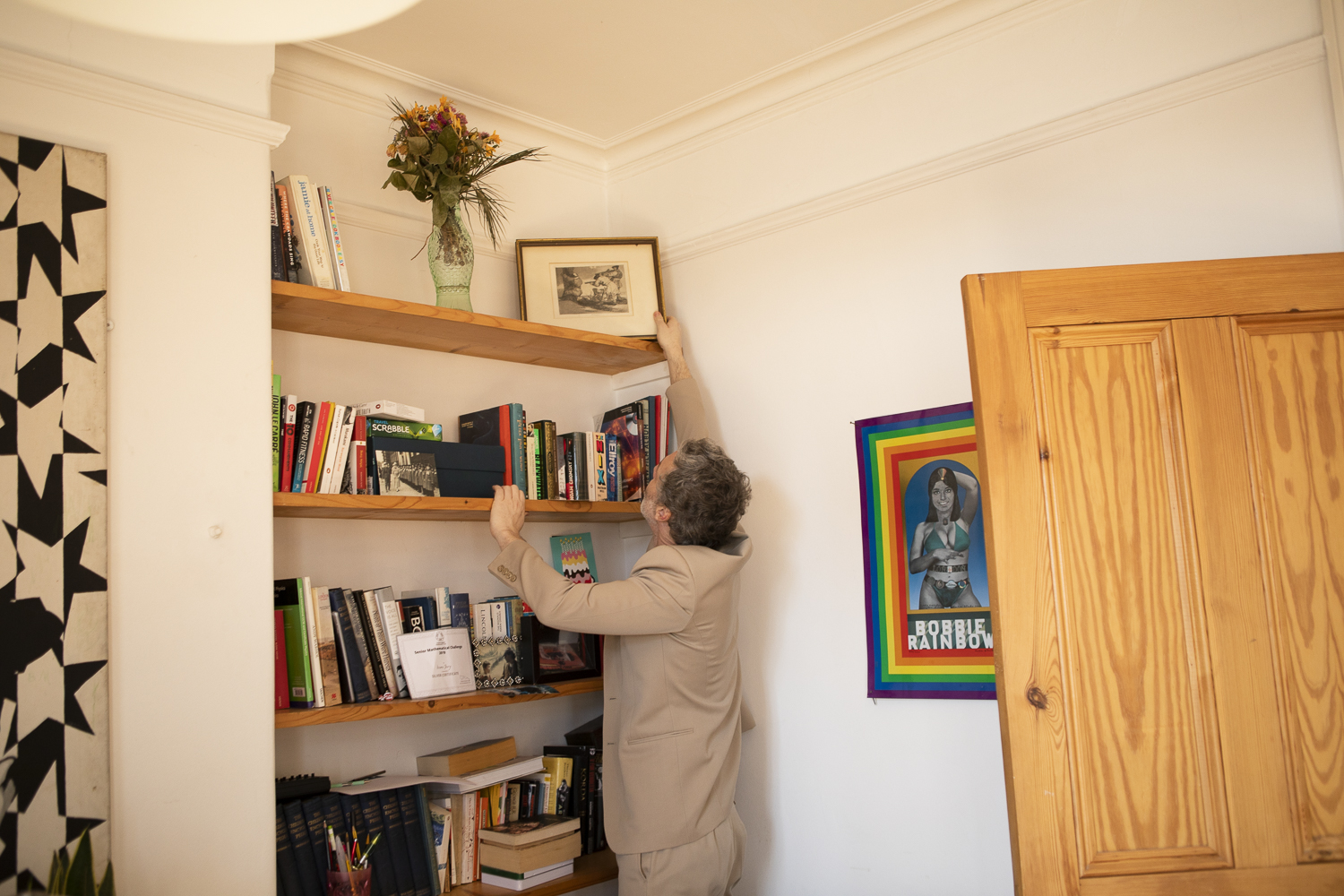 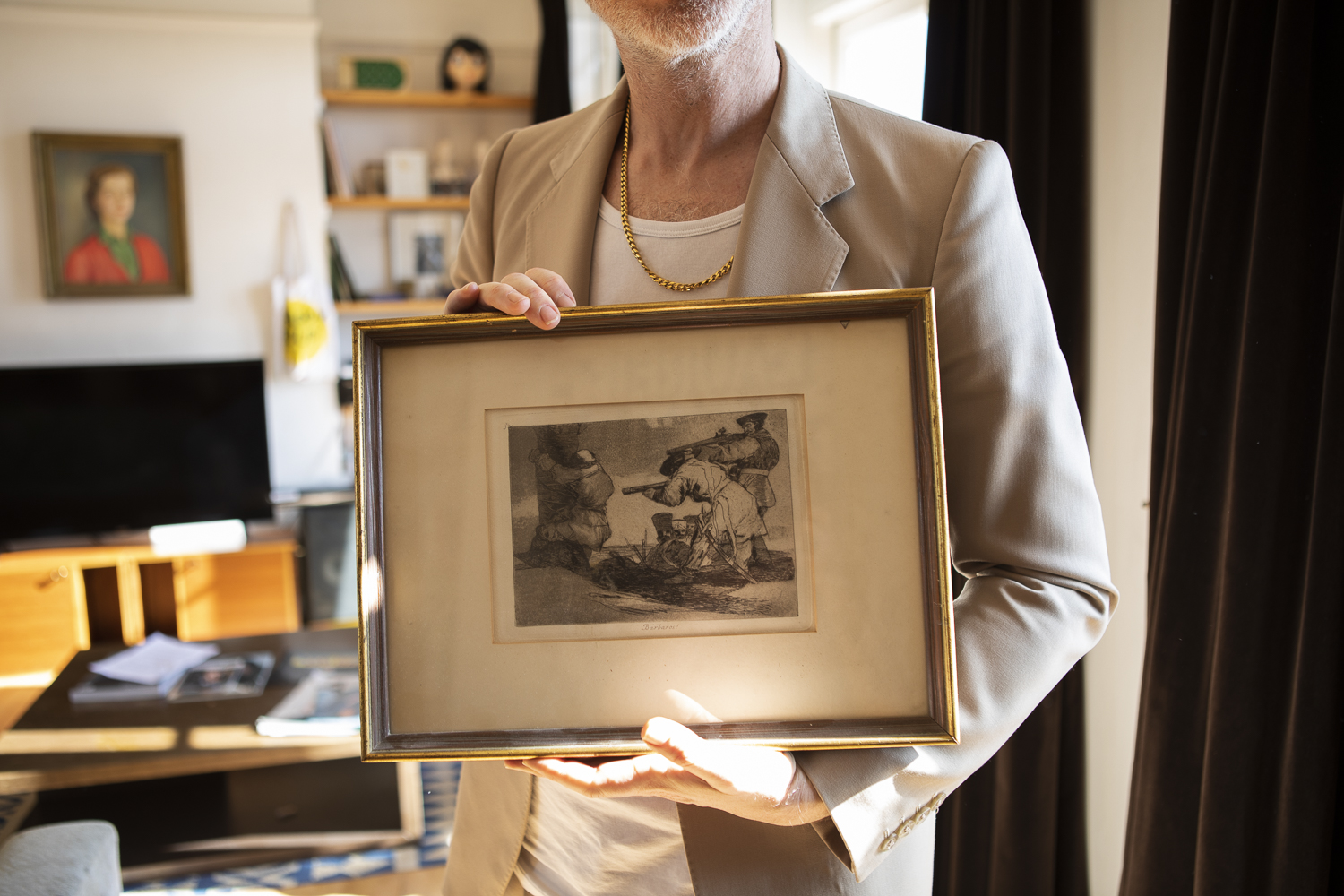 The studio spreads its tentacles across the flat in a way that would give a feng shui consultant nightmares. But there’s a practical reason too. Baxter – along with his 17-year-old son Kosmo, who’s commandeered his father’s favourite Hofner bass – plays sonic whack-a- mole with the other residents. “Depending on where you are in the flat, you get to irritate a different neighbour,” he explains. “Our flat actually expands across three flats. I have to move stuff and not concentrate on one person for too long, depending on how responsive they are, because they get quite upset.”

He spends a lot of time looking out across the river, sitting behind his Rhodes piano, composing. It’s a vista that’s peaceful at the moment, as Hammersmith Bridge is temporarily closed. However, the suggestion that it might provide musical inspiration is swiftly quashed: “I mean, if I started rivercising my music and talking about how the moonlit path to Barnes is affecting me then I think that might soften the agenda. Mine’s all about male, quirky, miserable stuff. It’s not about Barnes. Or the river.” 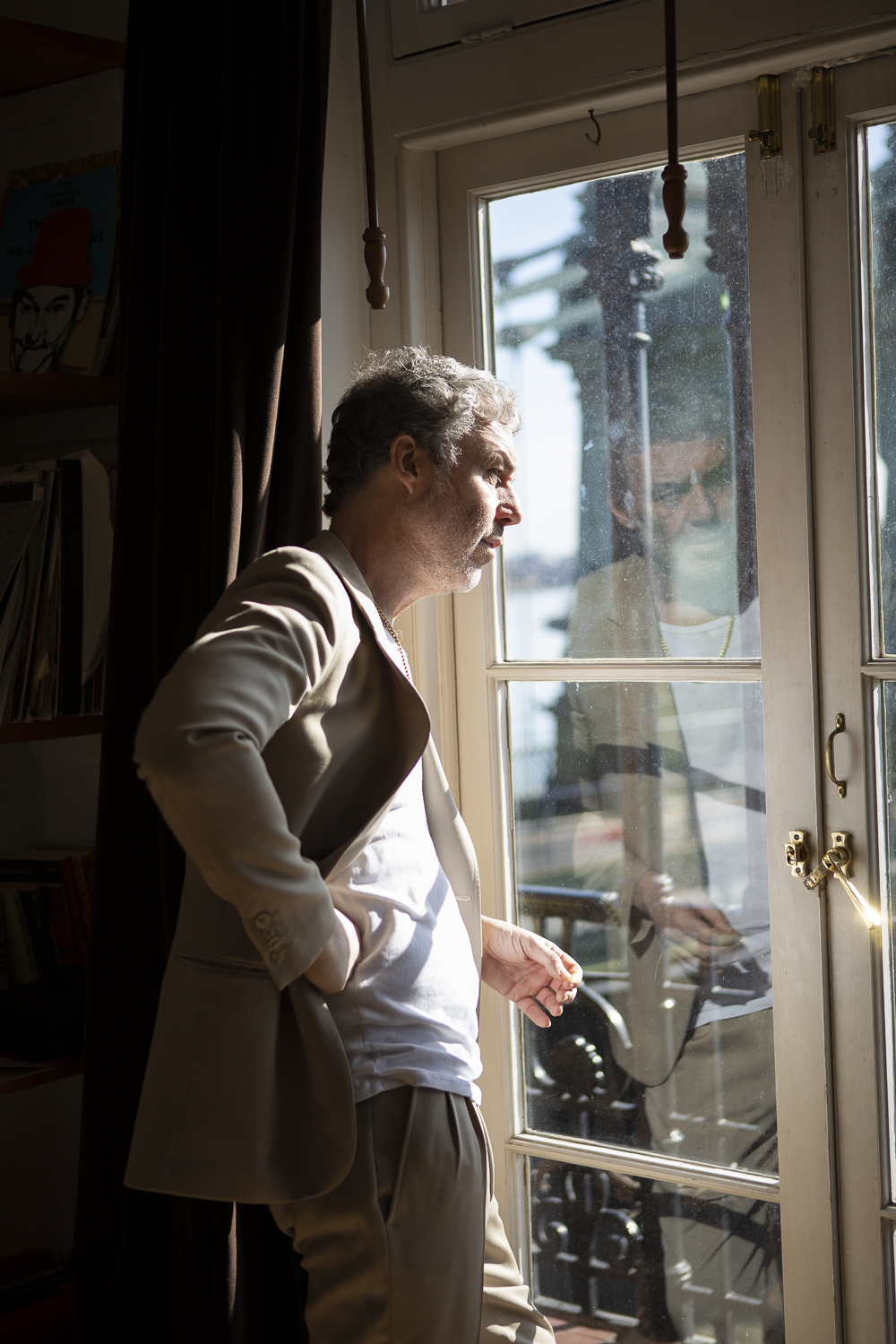 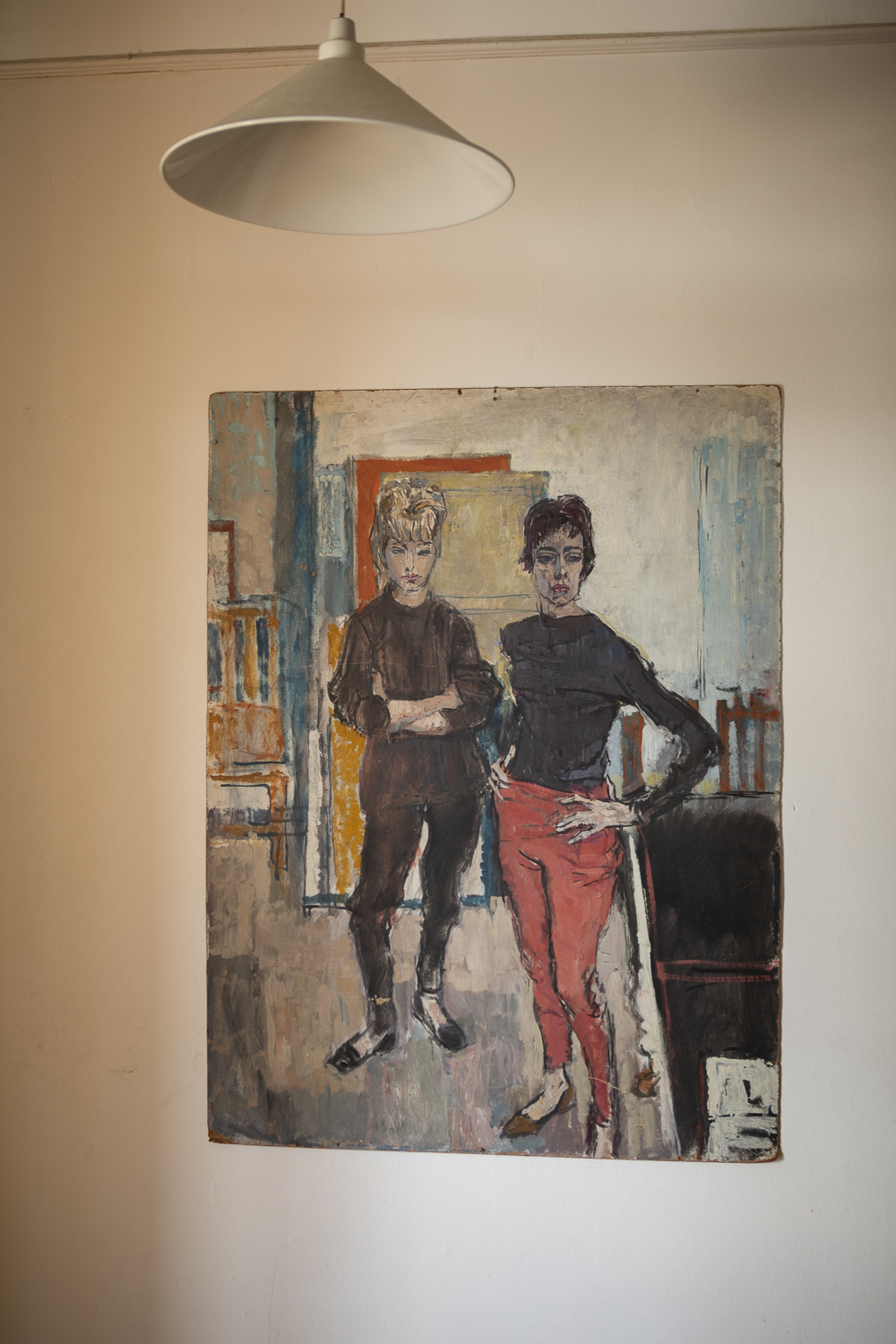 London is rapidly losing its personality, as the husks of nests that once fostered creativity are pounced upon by property developers and non-domiciled oligarchs. With the property part-owned by his other siblings, Baxter pays rent to the other family members and gets to enjoy some prime real estate, thanks to his father’s rock and roll antics during the ’70s. The flat’s interior is decorated with paintings made by Ian when he was studying at college under the tutelage of Peter Blake, as well as work by his mother, who painted the 1974 cover of Handsome by Kilburn and the High-Roads. Perhaps understandably, Baxter has drawn a line under talking about his parents. Instead, we discuss his Goya war etching – not a first-generation print, apparently – and a picture opposite his studio by his grandfather Thomas Rathmell, a celebrated painter in his day who was commissioned to paint the Investiture of the Prince of Wales, as well as portraits of the Welsh rugby team.

“I think he was a prolific philanderer, a deeply weird dude, and there are a lot of paintings of disgruntled-looking students. He may have had various excursions with them all.” The picture Baxter is referring to features two pupils from the Newport Arts School from the early ’60s. “They’re looking at him,” he continues, “and they’re standing, and there’s this real knowing…” He cuts off mid-sentence, before pausing to clarify. “I don’t think he was a non-consensual, predatory type. I think he was just a really unfaithful bloke. That’s an amazing picture, he was a brilliant painter.”

If he is reluctant to dive into his own personal history at this time, Dury is surrounded by it on the walls – from 19th century Spanish romantic printmakers to ’70s stars, via the British Pop Art of the previous decade. His home in Hammersmith may prove to be a cultural oasis in the coming months. With that in mind, Baxter Dury is grateful for his bolt-hole by the river. “You can get very desensitised to how good you’ve got it,” he admits. “Especially at the moment when we’re all going to have to be at home a bit more. But I’ve got some posh frozen food and two cans of soup. I’m feeling okay about it all.” 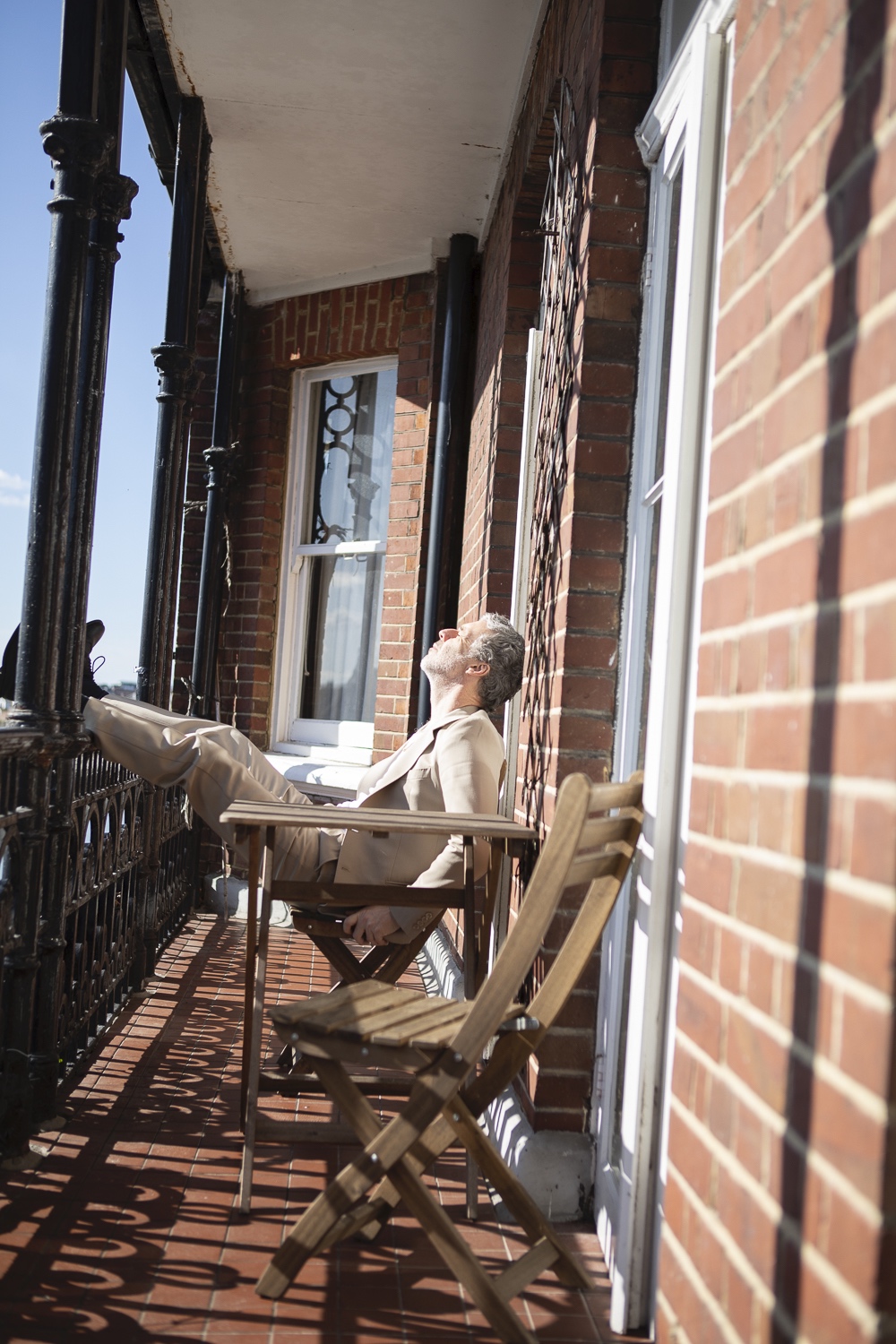 Linkedin
RELATED ARTICLES
OTHER ARTICLES
A 37-year-old woman shares how her abortion led her to become a clinic worker, and the abuse she’s received in that role.
Yesterday thousands gathered outside Buckingham Palace after news of the Queen’s death broke.
Sean Maung’s photos are a love letter to the Black and brown communities that make up New York.
For over a decade, gamblers have won big by employing people to place live bets from the court. But does this dubious method still work?
With skyrocketing rents, packed out viewings, bidding wars and more, renting in London has never been harder.
Cindy Campbell recounts how her brother ushered in a new era of musical culture at a party she held in the Bronx in ‘70s.