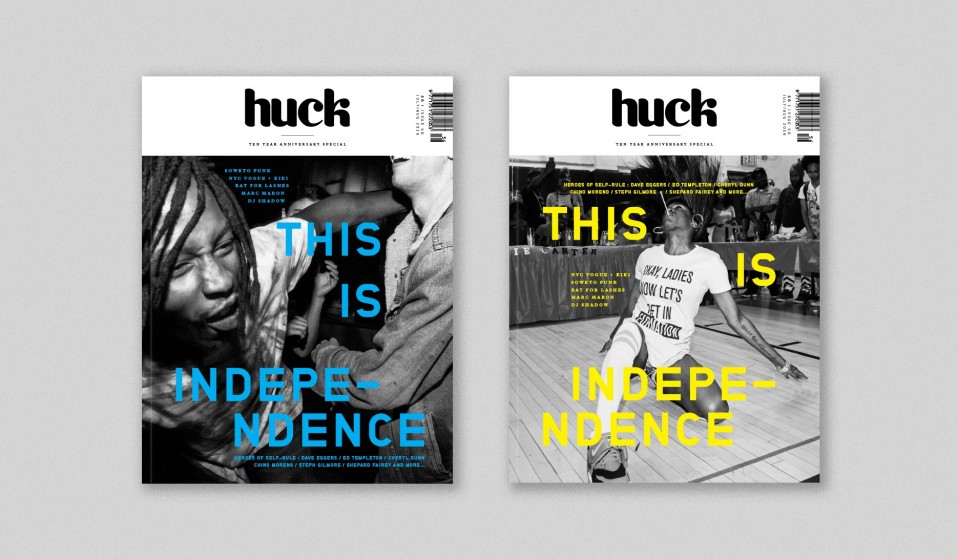 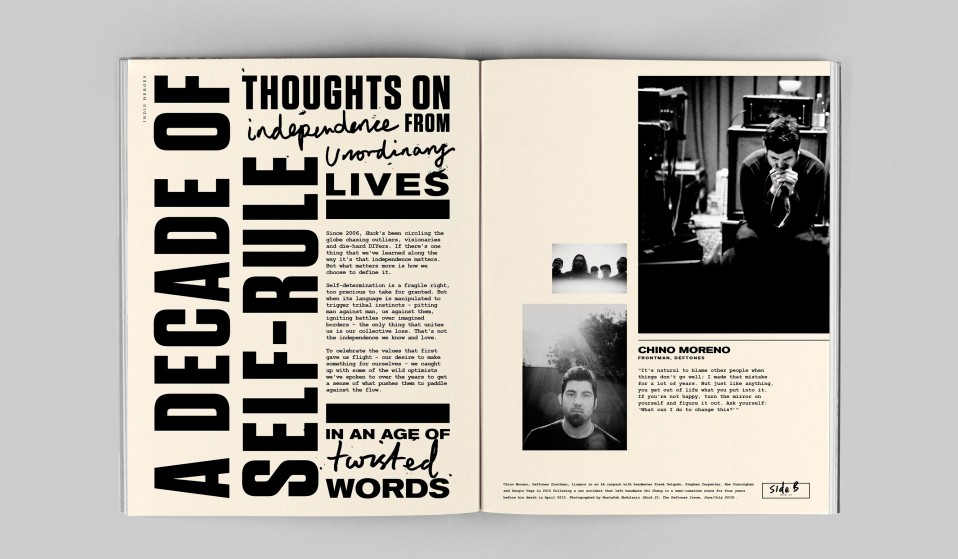 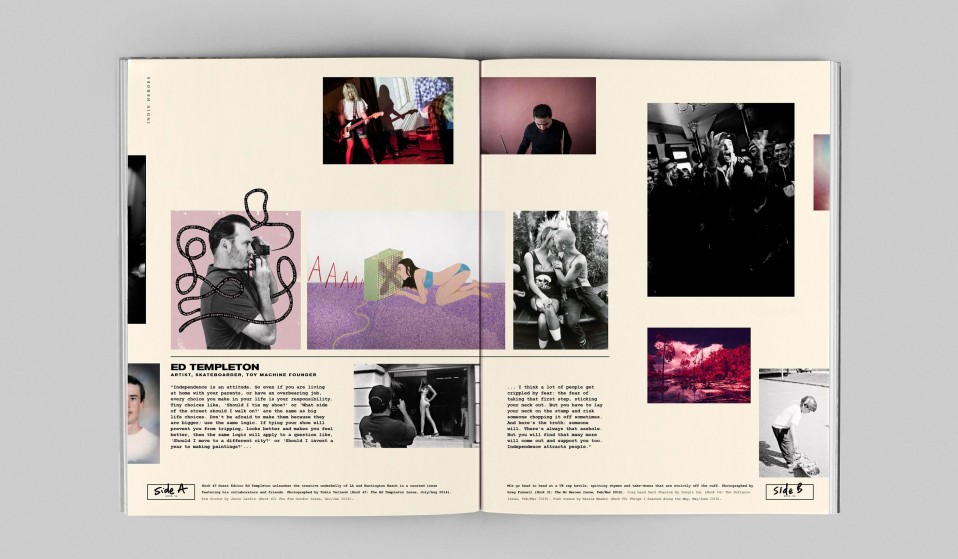 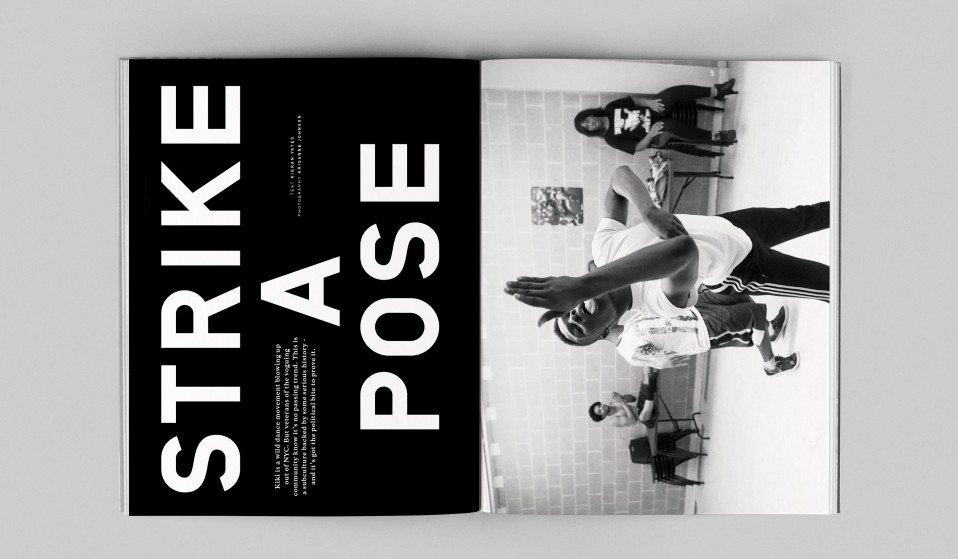 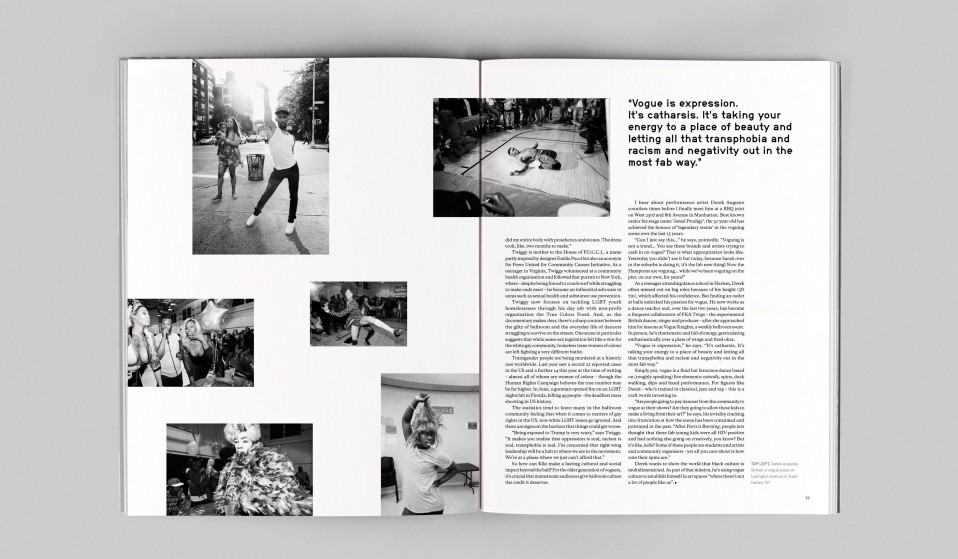 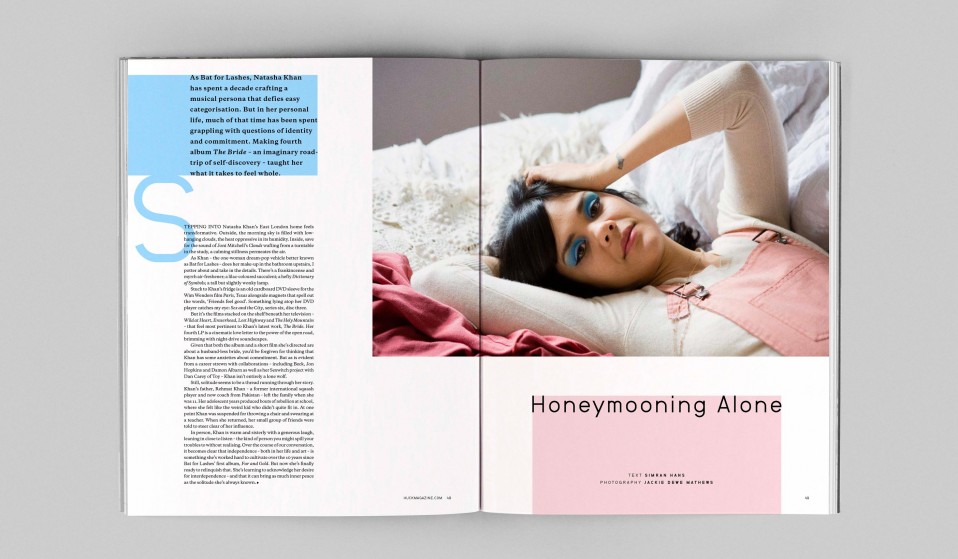 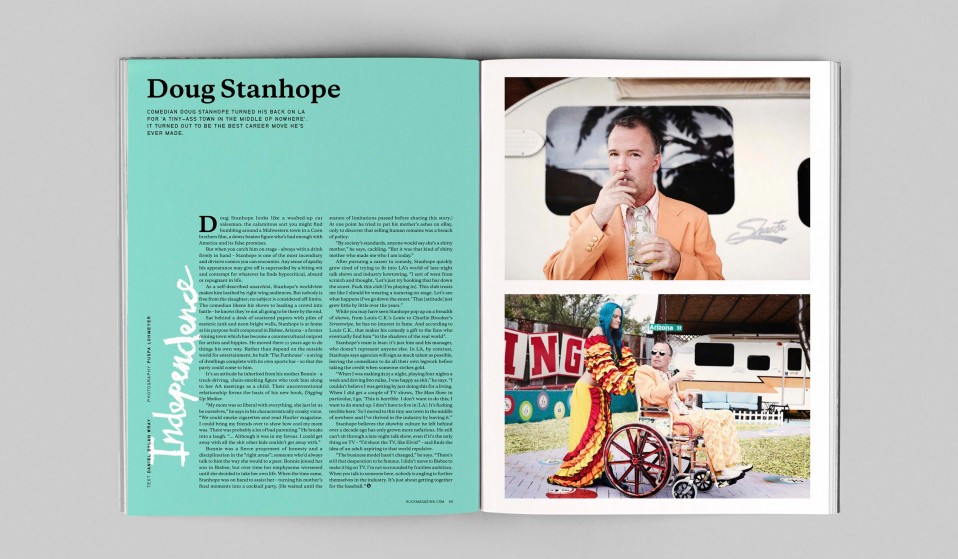 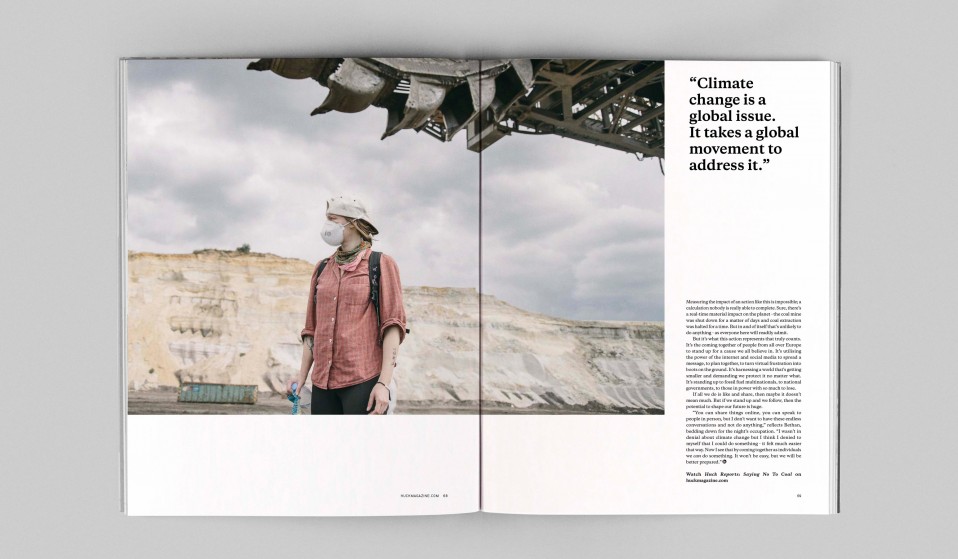 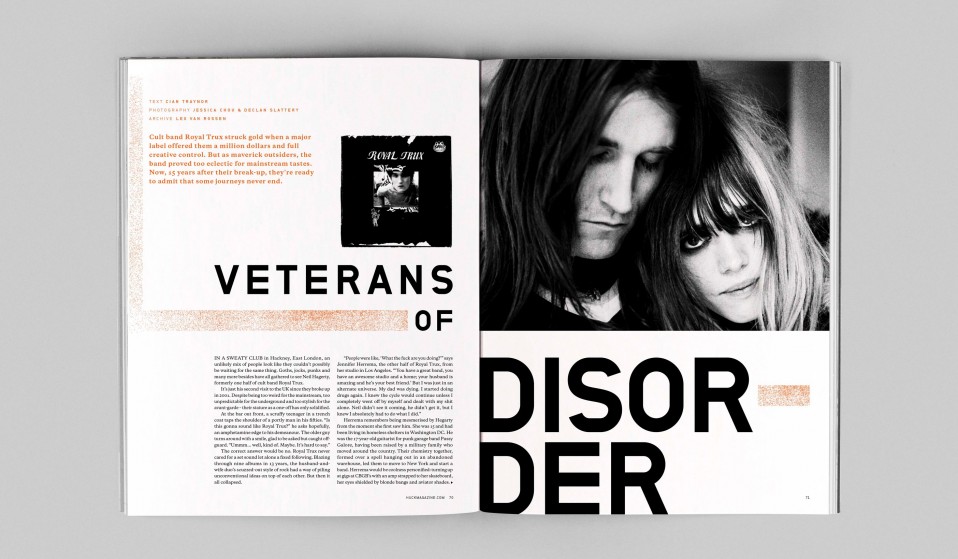 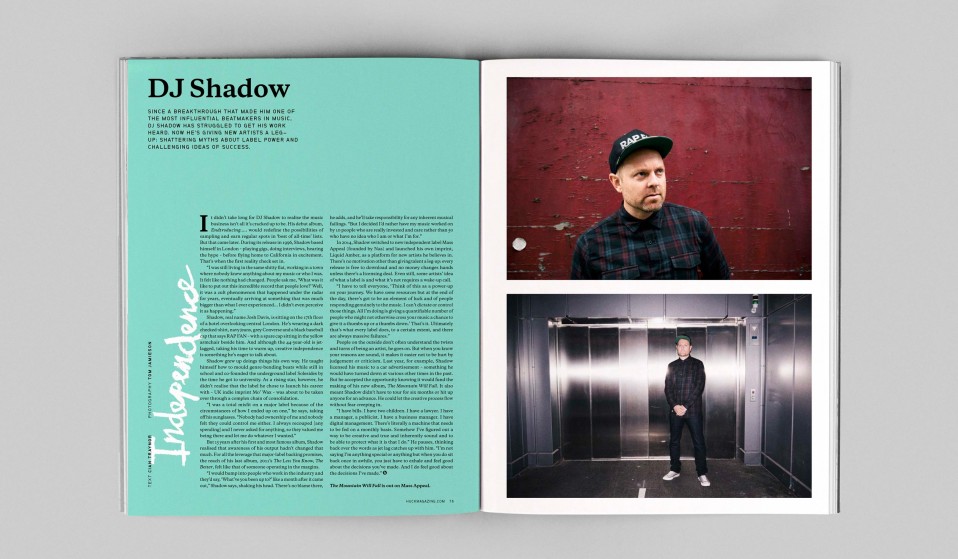 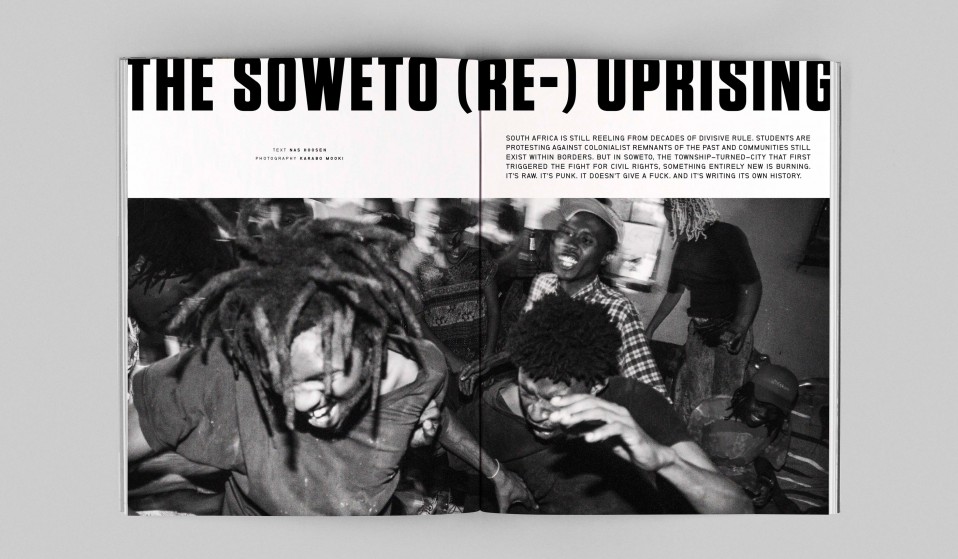 Huck's 10th anniversary special celebrates a decade of self-rule - and the outliers who define what it means to be truly independent.

Huck's 10th anniversary special celebrates a decade of self-rule - and the outliers who define what it means to be truly independent.

It’s been 10 years since Huck first launched as an independent home for mavericks and pioneers. Along the way, our mission has never wavered: to map grassroots movements, spotlight free-thinkers and challenge the status quo.

A decade on, independence still matters – perhaps now more than ever. But beware of anyone who tries to co-opt its power. Independence isn’t about being a ‘Great’ island all alone, or drawing up the bridge in self-protection. It isn’t diminished by help from others – wins don’t taste sweeter in solo hits. In our minds, it’s way simpler than that divisive spiel.

For our 10th anniversary issue, we’re gravitating towards people who have blazed their own trail, finding out how self-determination has shaped their story. Some see independence as a collective battle, creating space where it’s otherwise denied.

For others, the fight is personal – protecting their self-belief is a lifelong mission. They come from every walk of life, from all over the world, but there’s one thing connecting them: they all question those who tell them what to think.

Join us as we celebrate a decade of self-rule – and the freedom principle that keeps us going. 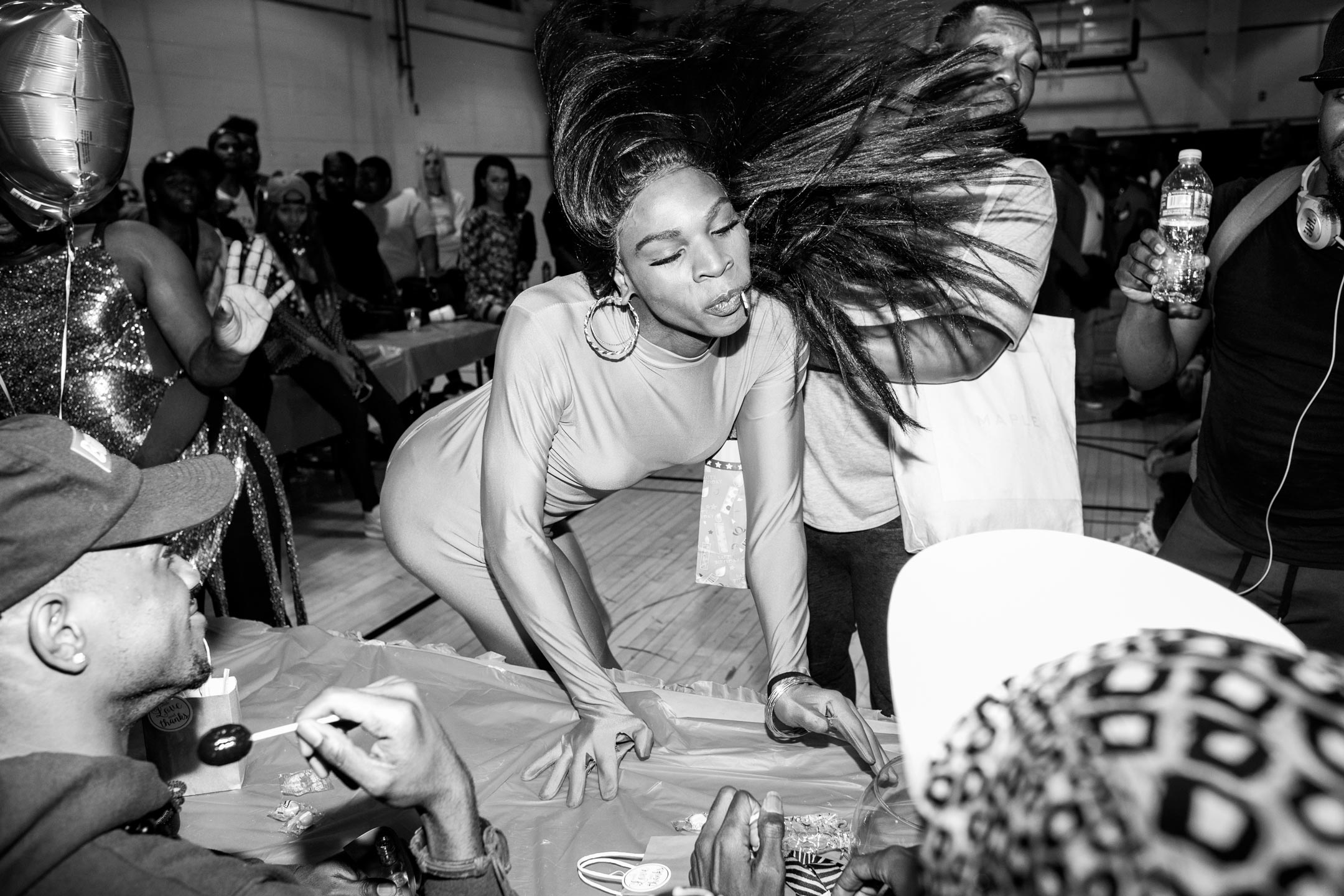 Kiki: Kiki is a wild dance movement blowing up out of NYC. But veterans of the voguing community know it’s no passing trend. This is a subculture backed by some serious history – and it’s got the political bite to prove it.

Heroes of Huck: To champion the ideals that first gave us flight, we caught up with some of the wild optimists we’ve spoken to over the years – Chino Moreno, Stephanie Gilmore, Janette Beckman, Dave Eggers, Shepard Fairey, Cheryl Dunn, Ed Templeton and Rodney Mullen – to get a sense of what pushes them to paddle against the flow. 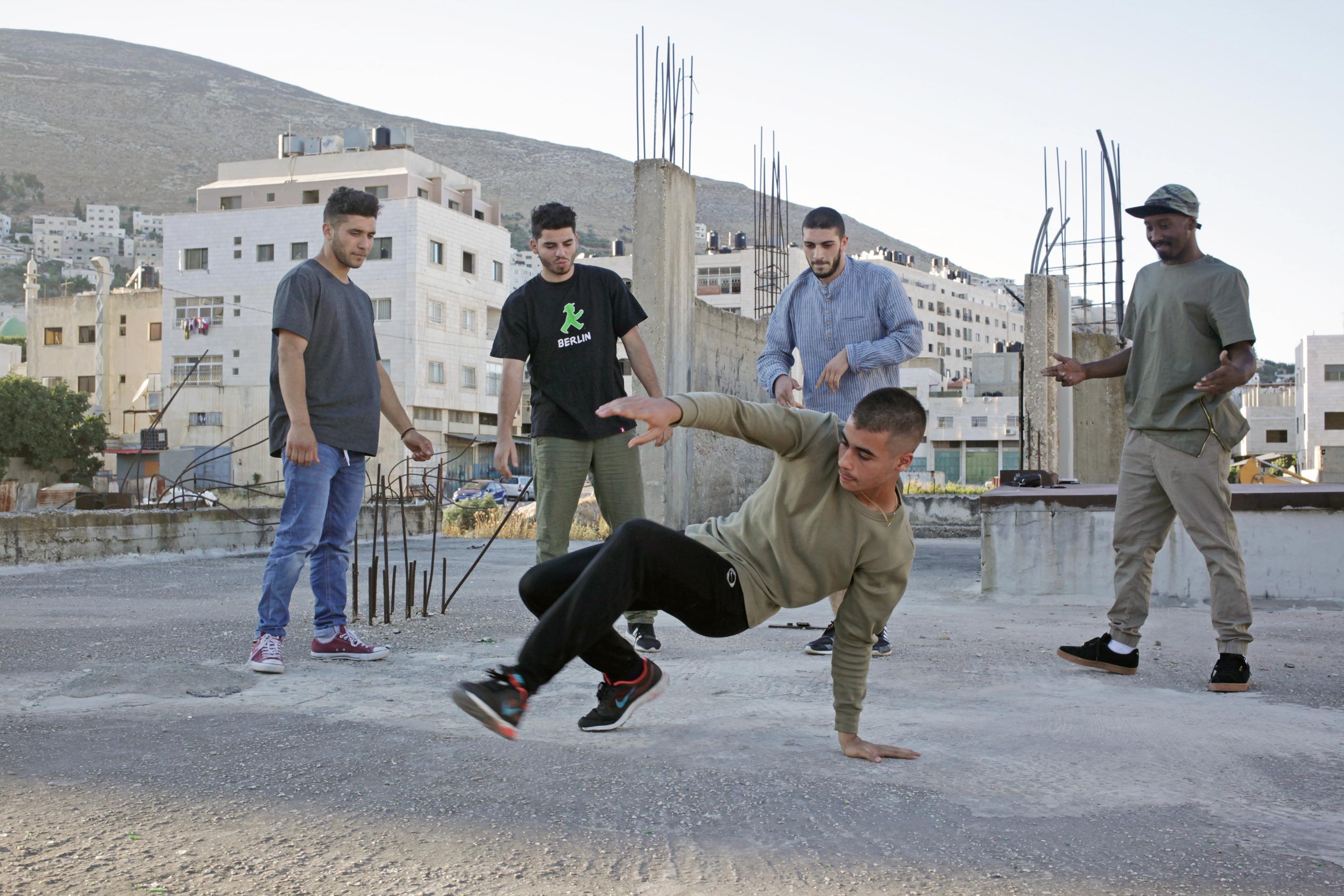 Physical Graffiti: From breakdancing to ballet, a new wave of Palestinian dancers are finding creative ways to reclaim the one thing they feel they’re being denied – freedom of movement.

Foster Huntington: Photographer and blogger Foster Huntington is a restless spirit – a van-living, treehouse-building chaser of dreams. Now, with a million followers on Instagram, he’s ready to turn his reality into a fantasy world.

Bat for Lashes: Natasha Khan has spent a decade crafting a musical identity that defies easy categorisation. But in her personal life, much of that time has been spent grappling with questions of identity, commitment and independence. In an intimate interview at her home in London, she tells us what it took to finally feel whole. 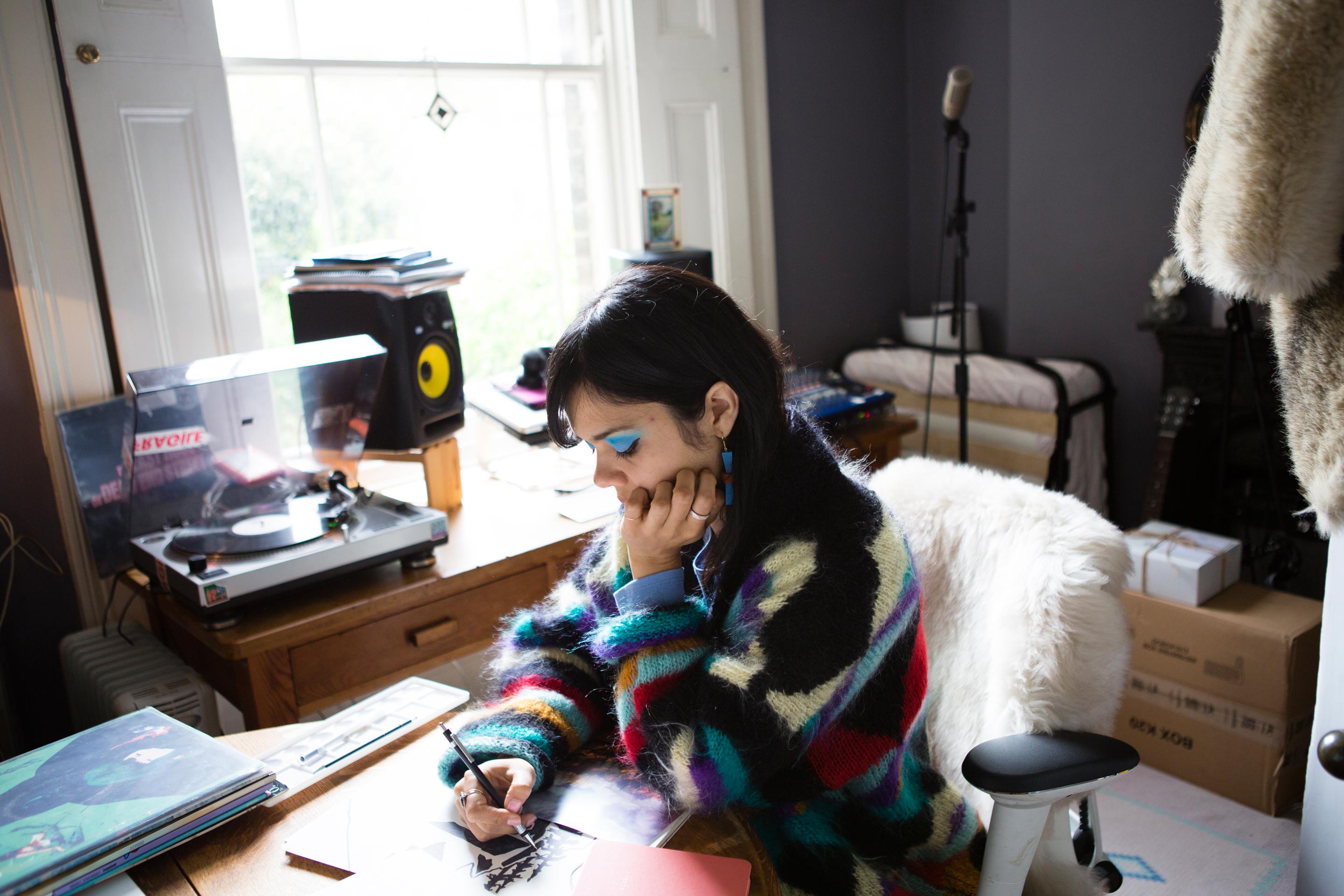 Shahrbanoo Sadat: On a quest to capture ‘the real Afghanistan’, 26-year-old filmmaker Shahrbanoo Sadat defied a corrupt movie industry to deliver a scathing critique of her home country – and humankind’s tendency to run with the pack.

Acid Priest: When photographer Lee Kirby stumbled across a bedraggled-looking man in designer clothes, he found himself opening a biographical pandora’s box. But for Lee Trosclair, mystery man-turned-muse, the story of his unconventional life is just beginning. In a world that undervalues art, he’s determined to create a safe haven for those who value independence above all else. 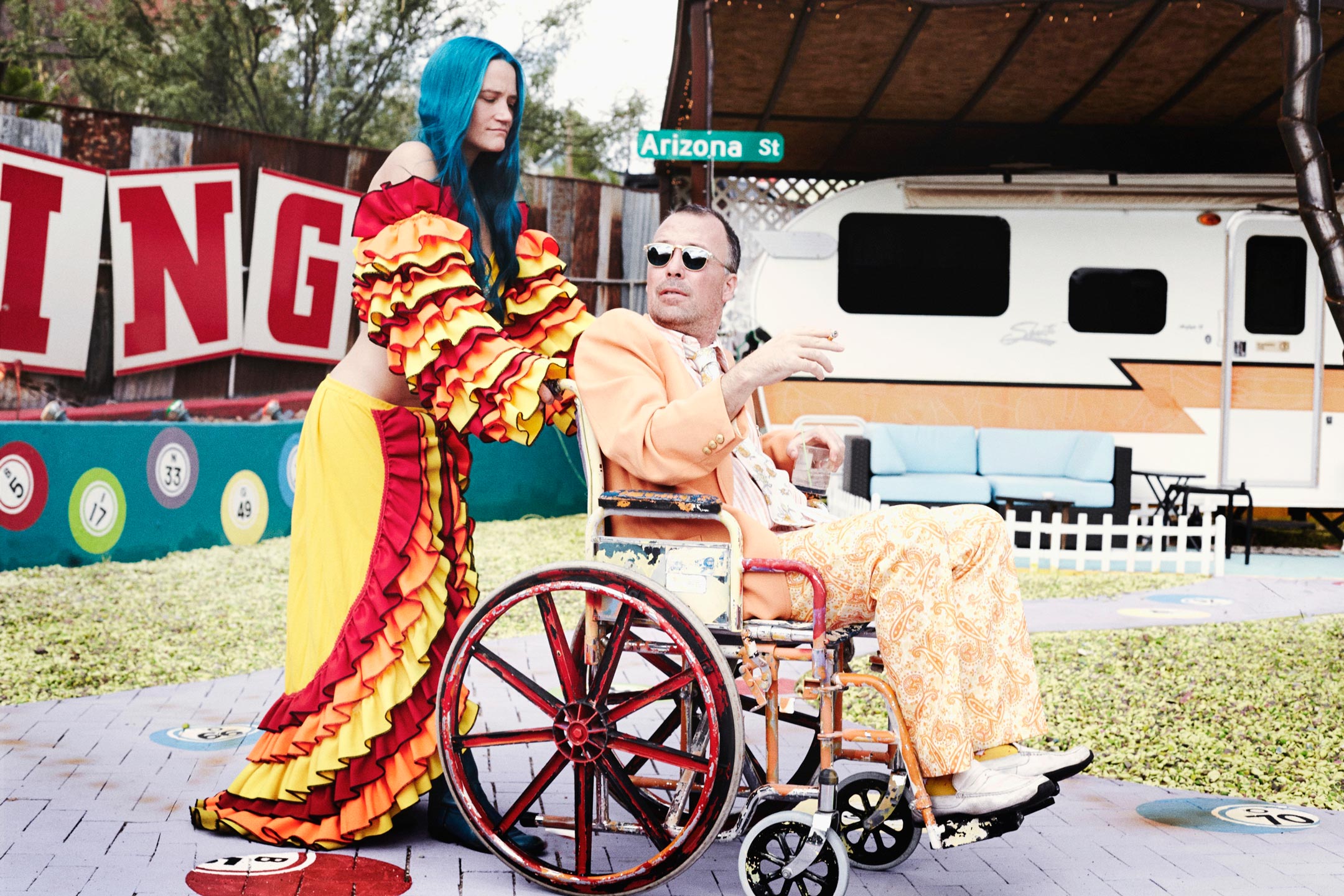 Doug Stanhope: This comedic outlier turned his back on LA for “a tiny-ass town in the middle of nowhere” where he can live life on his own terms. It turned out to be the best career move he’s ever made.

Utah & Ether: As the Bonnie and Clyde of graffiti, Utah and Ether broke probation to go on a worldwide tagging spree. But living on the run, chased from country to country, has taught them what it really means to be independent. 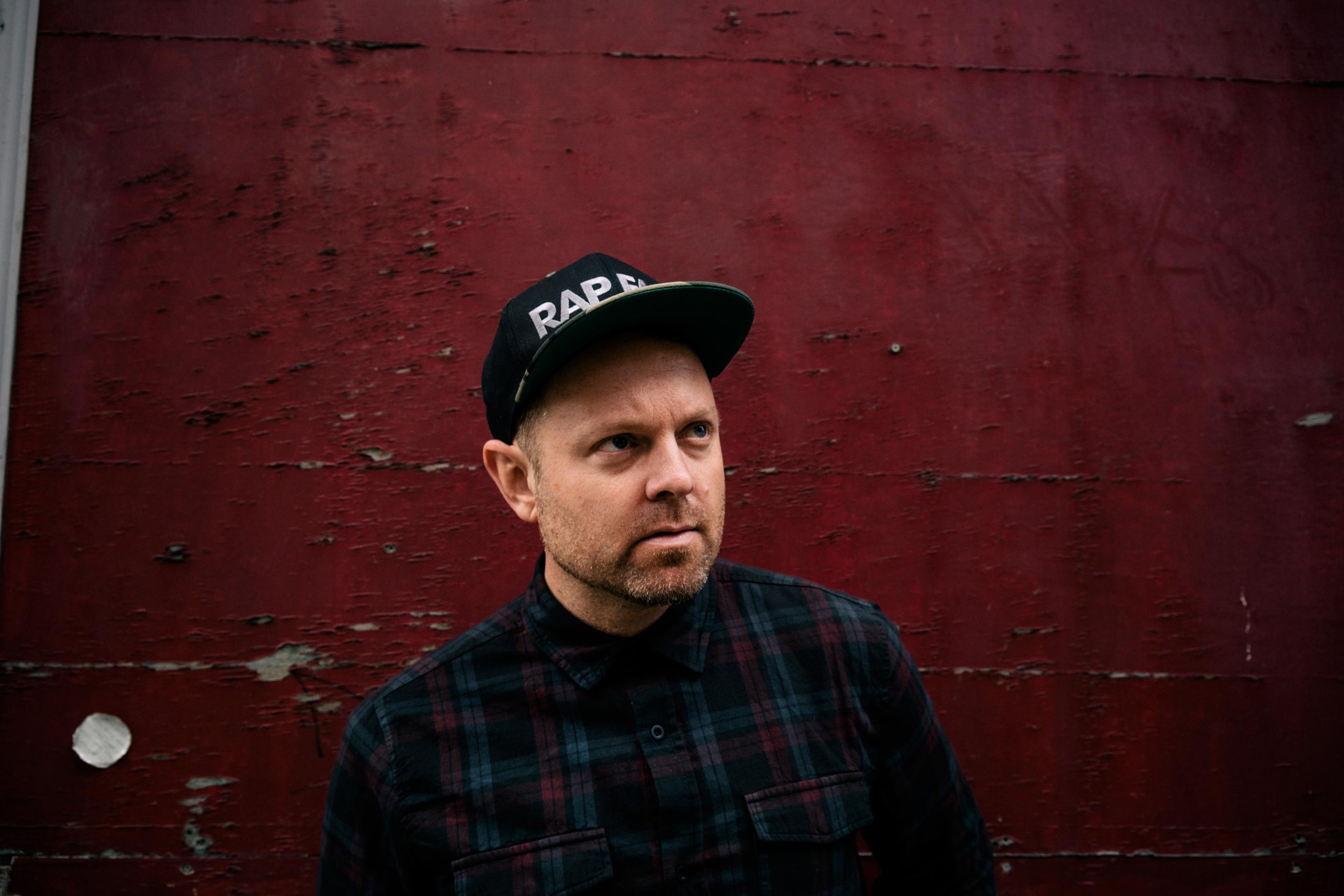 DJ Shadow: Since a breakthrough that made him one of the most influential beat-makers in music, DJ Shadow has struggled to get his work heard. Now he’s giving new artists a leg-up – shattering myths about label power and challenging ideas of success.

Environmental Activism: Climate change is the greatest threat facing our planet. As its perpetrators collude across borders, a new wave of activists are forming their own international web. They’re reclaiming our right to self-determination – before it’s too late to act. 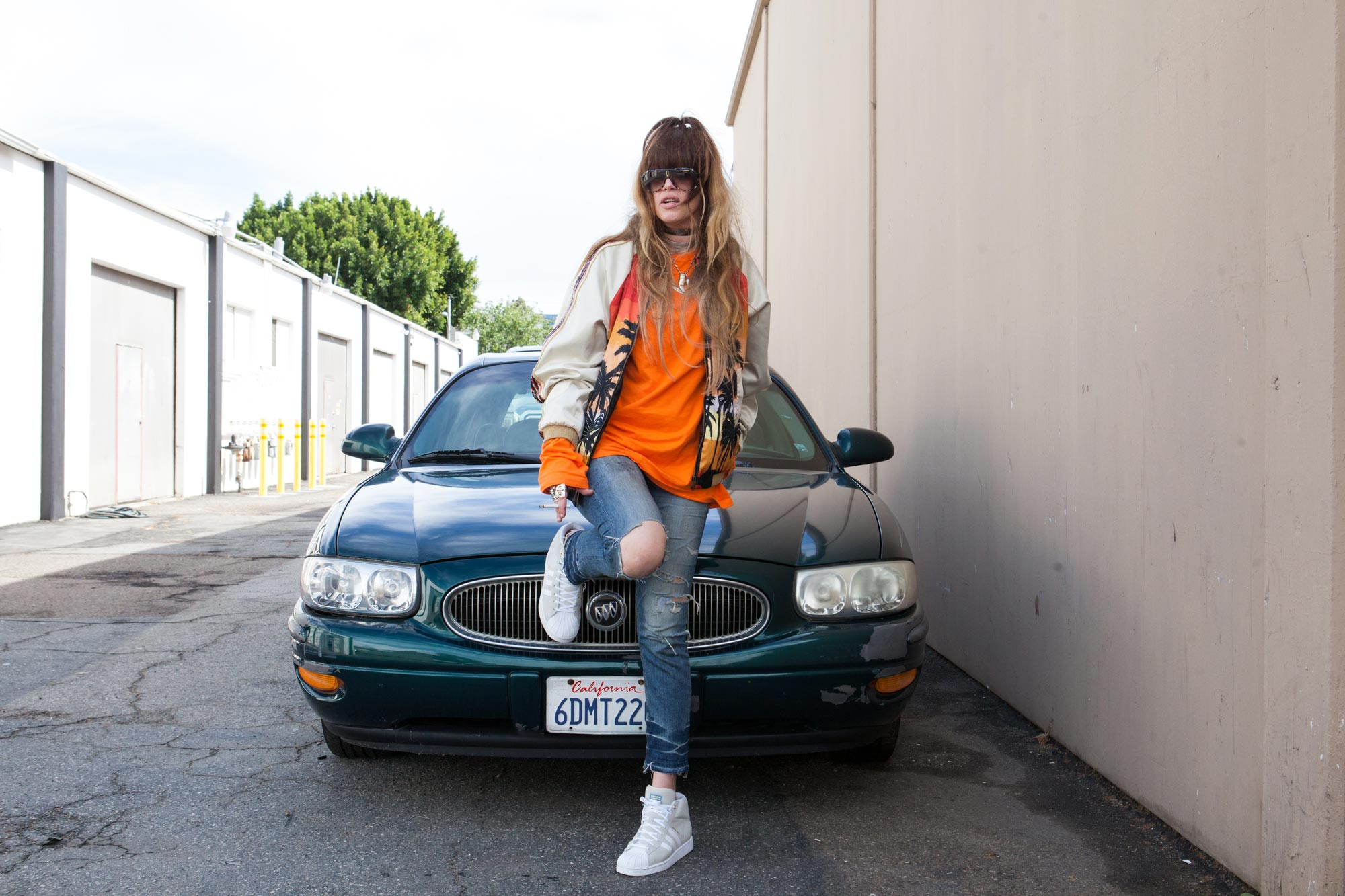 Royal Trux: This cult band struck gold when a major label offered them a million dollars and full creative control. But as rank outsiders, the duo proved too eclectic for mainstream tastes. Now, 15 years after their break-up, they’re ready to admit that some journeys never end.

Ketty Nivyabandi: Once a little-known Burundian poet, Ketty Nivyabandi led a dangerous protest against her country’s president. But becoming an unlikely hero meant having to flee for her life. Now she’s keeping the fight alive from afar. 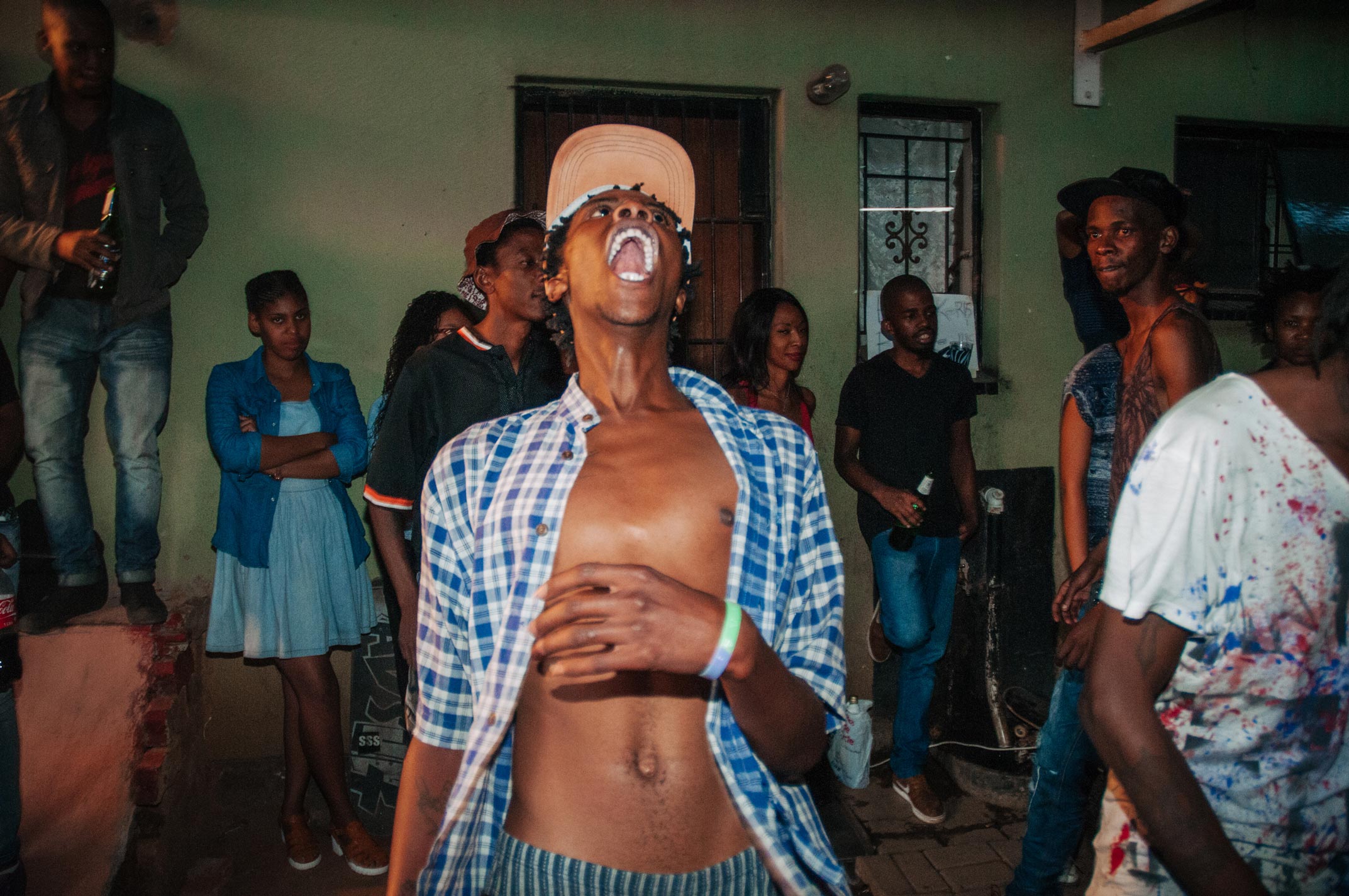 The Soweto (Re-)Uprising: South Africa is still reeling from decades of divisive rule. Students are protesting against colonialist remnants of the past and communities still exist within borders. But in Soweto, the township-turned-city that first triggered the fight for civil rights, something entirely new is burning. It’s raw. It’s punk. It doesn’t give a fuck. And it’s writing its own history.

Marc Maron: After 25 years as a struggling comic, Marc Maron was close to giving up when he finally found success on his own terms: turning his intense personality into a hit podcast. He takes us through the art of using vulnerability as a means to connect with others. 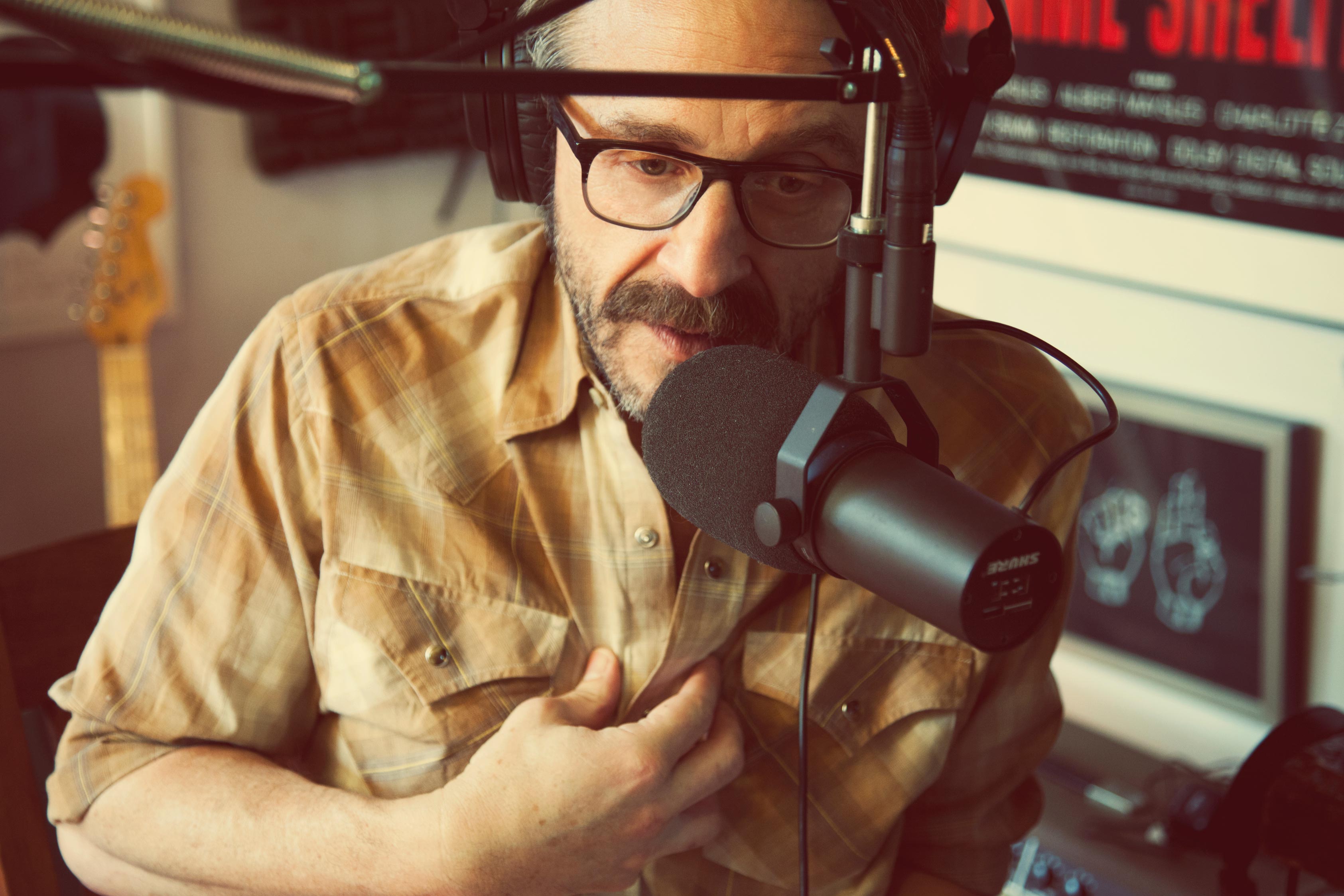 How To Make It Your Own: Words of wisdom from independent doers turning their passion projects into progress. Featuring Marina Blake, founder of Brainchild – an independent festival in East Sussex – and Claire Milbrath, founder of Montreal’s The Editorial Magazine.

Order Huck 56 – The Independence Issue in the Huck Shop now or subscribe to make sure you never miss another issue.

Linkedin
RELATED ARTICLES
OTHER ARTICLES
Jeffrey Henson Scales intimate portraits and protest images of the BPP and its leaders offer a rare insight into organisation at a time of societal upheaval.
Campaigners reflect on what the supreme court’s decision to allow buffer zones in NI means for the future of reproductive rights in the UK.
David 'Dee' Delgado’s photo project is about honouring and uplifting the city of his youth, and a world rapidly disappearing under the relentless onslaught of gentrification.
A group of aid workers face prison for helping to save people fleeing their homes at sea. If they are charged, it will have a chilling effect on humanitarian efforts.
A new film from Berghaus traces the story of Adam Raja, who left behind a turbulent upbringing to discover the healing power of climbing.
After building his reputation covering the US civil rights movement in the 1960s, the photographer went on to produce some of the most enduring images of the past century.