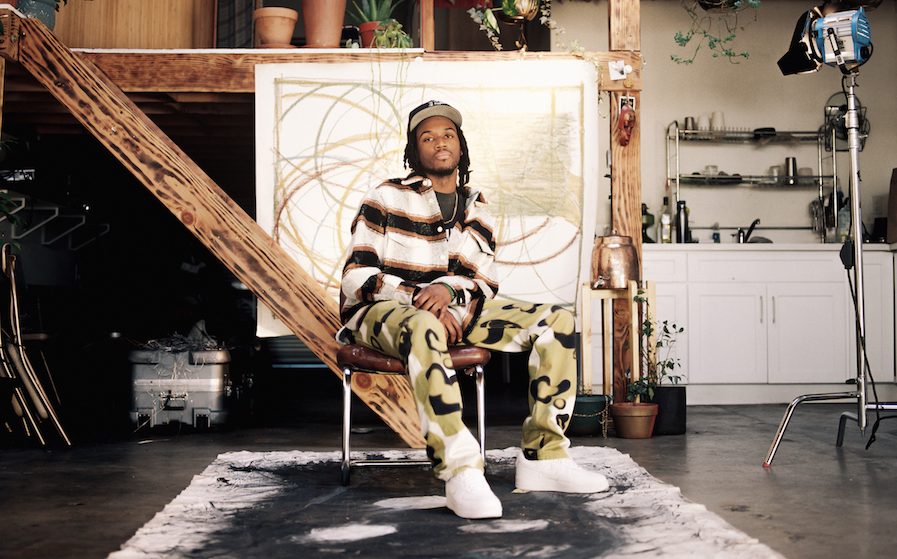 The rapper talks working through grief and making music for underdogs.

Amid the release of his long-awaited third studio album, the rapper talks working through grief and making music for the underdogs.

Chicago rapper Saba speaks for the underdogs, more concerned with inspiring people with nothing in their pocket than the capitalists draped in Supreme. “Rap can get classist, real fast,” the 27-year-old says when I quiz him on the importance of a previous lyric (“Trying to finesse an Uber with a new email”) from the xylophone-heavy ‘Stoney’ about cheating a free-taxi promotion. “It’s my responsibility to be the opposite.”

Composing his thoughts, he adds more sternly: “Look, my family really didn’t have no fucking money! If you can figure out a way to move around Chicago with nothing and still manage to finesse an Uber, a train ticket, the bus, well, that’s impressive to me! I rap for those types of people.”

The 27-year-old artist from the West Side of the Windy City has risen to the top of hip hop thanks to an impressive harmonic range (Saba has played the piano from a young age) and a three-dimensional, Dickensian storytelling ability. He helps ordinary working people understand their pain, but also finds ways to move past it via breathtaking songs that combine glistening neo-soul with confessional hood rap.

Along with talented peers like Mick Jenkins, Noname, and Smino (the latter two have a group with Saba called Ghetto Sage), Saba has proven that conscious rap can flourish and find a mass audience without the support of a major label. It’s true that Saba’s last album, 2018’s CARE FOR ME, was about the rawness of grief and processing senseless violence (“Jesus got killed for our sins / Walter got killed for a coat”). But Saba tells me plotting a route towards the light of forgiveness was its primary objective.

Chicago reached 800 homicides in 2021, a level not seen in 25 years. So, when Saba rapped about letting sleeping dogs lie after losing a fist fight (‘FIGHTER’), it was a radical moment (CARE FOR ME won a deserved ‘Best New Music’ in Pitchfork) for his city. However, when promoting this album, Saba noticed journalists and radio jockeys were more preoccupied with probing him on painful memories.

“It could be a journalist, it could be a fan, but there’s strangers that’ll talk to you and because the music is so personal, and they feel like they know you through the music, they think they can ask you about your trauma [like they’re your shrink],” he admits. “They will openly discuss things that they don’t realise are really affecting me and my family.”

I bring up a trend I’ve noticed of media organisations only reporting on certain Black artists when they’re dead or being passed through the legal system, often staying quiet when they’re free and in a more positive place mentally. We saw it with Tupac, but also with Nipsey Hussle and Drakeo The Ruler. It’s as though the negative headlines – or even those hideously irresponsible podcast discussions that dissect drill beefs like they’re wrestling storylines – are favoured for generating the most attention.

Saba agrees. “I’ve lost friends who make music and I see the media suddenly pays attention to their art. It’s literally only when they die or get shot or overdose! I would rather you didn’t even share the story of my friends’ or family members’ deaths if you didn’t support them when they were alive.”

With hotly anticipated new album Few Good Things, Saba is once again giving his audience a raw insight into the cycles of grief, but there’s a palpable sense he’s also reminding them of their reasons to smile. On ‘Fearmonger’, Saba explores his funky side, sounding like he’s channeling Bilal in his 1st Born Second era, while ‘Come My Way’, a gorgeous collaboration with Bone Thugs’ sensei Krayzie Bone, carries the hopeful sentiment of: “They’re gonna see me shine”. Saba says he was aiming to make his very own Late Registration.

These ambitious new songs are accompanied by a short film, produced by Saba’s Pivot Gang imprint. Saba makes use of his grandparents’ testimony to explore their family roots in poetic sequences that are lit like the artwork of Illmatic and indebted to golden-era Spike Lee (there’s one scene where a bunch of kids play in the water of a broken sidewalk faucet). This nostalgic film is a love letter to the healing powers of hip hop (“Always struggled to converse unless it’s with a verse” spits Saba about overcoming anxiety with bars).

Throughout this new audiovisual project, Saba doesn’t forget where he came from (“We from the basement, concrete on the floor” he raps on ‘Simpler Times’), yet he sounds like he’s now in a position where he’s coming to terms with his past. The music is subsequently a lot looser, the songwriter effectively transitioning from being slumped in a chair to performing with the vibrancy of Stevie Wonder (one of Saba’s heroes).

From making fart jokes as a tricky, syllable-heavy rapper on early mixtape Get Comfortable, to landmark Chance the Rapper collaborations, to the artist we now see on Few Good Things, who carefully chooses his words (“Is a peace of mind worth leaving everything you knew behind?”) and sings with real clarity, Saba has fully blossomed. Looking ahead to the future, he just wants people to expect the unexpected.

“I don’t ever want to be put inside a box or limit myself,” he says. “I might be singing, I might be making rock music. It’s solely based on my feelings, no business-motivated stuff. To me, having freedom is waking up and making decisions based on how you felt that day. Looking ahead, I really think the sky is endless.”

Huck spoke to Saba about treating the piano as a therapist, playing the N64, and how he defines his faith.

Just so we can get it out the way, will there ever be a Ghetto Sage album with Smino and Noname?

Put it this way: if we talk again 10 years from now, I guarantee [by then] there will be at least one Ghetto Sage album out in the world.

Okay, good. I wanted to go back to something you said in 2012 on ‘Last Week’s Paper’, where you rapped: “It’s hard to do homework when I don’t have my own room”. It always stuck with me because working-class kids are at a natural disadvantage because of their lack of space at home, right?

I literally moved a week ago and I’ve now got a little separate room in my house. It was like, damn, this is the first time maybe in my whole life that I’ve had my own room and space to think! To create when you feel boxed in is such a hard thing to do.

When you were back at school, who were the rap artists who sparked something inside of Saba?

I think Lupe Fiasco was a big one. Pharrell, Kanye, obviously, Bone Thugs and Harmony. Camron was a big influence too, because he had this expansive vocabulary where he could say the exact same sentence three times in a row and each time they’d somehow mean something different; I also wanted to do that as an emcee!

I’ve heard you spend a lot of your time buying vintage equipment. What’s been the biggest purchase?

I had to stop because that is a great way to lose all of your money [laughs]. I was getting a crazy bunch of synths and MPC machines. The first synthesiser that I bought was like $6,000. I didn’t know how to use it, so I had this crazy piece of equipment purely on display. I actually ended up giving it back! I do have a crazy microphone, though. Yeah, my mic is probably the most expensive. It’s a vintage U47. It makes your vocals sound so much warmer. 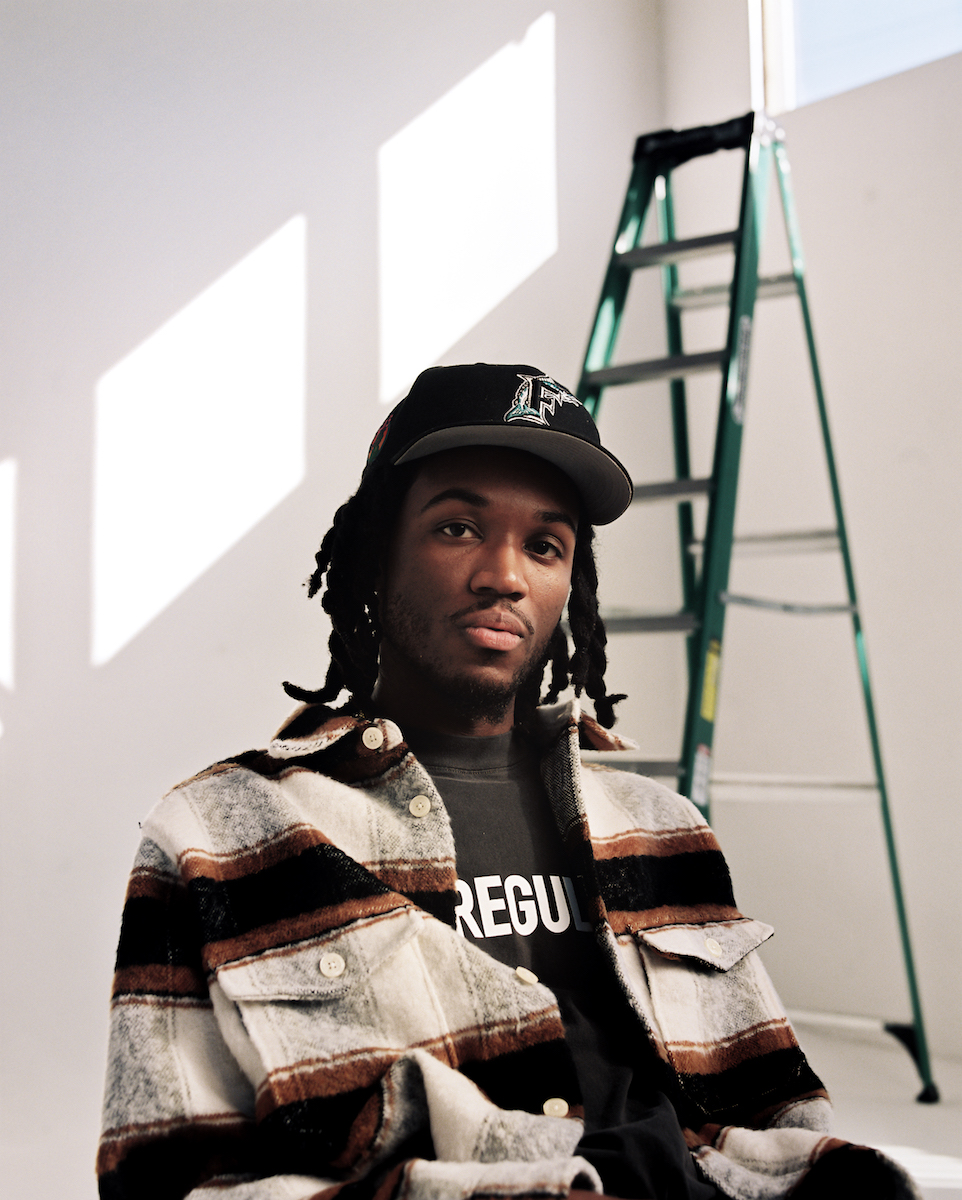 When you sit down and play the piano, is it a little like sitting down with a therapist?

Yeah, definitely. You know, the piano was how I first got involved with music. Just sitting in front of the piano is one of the most organic places to write music, period. I do all my demos in front of a piano, because it means I am thinking more about the songwriting elements. It isn’t just making up verses, but really incorporating structure into the songs. The soul artists in the 1970s gave us the blueprint to make the best music ever; sometimes that gets overlooked. The producers that I worked with on Few Good Things are the kind of dudes who study the melodies, harmonies and chords on Innvervisions by Stevie Wonder, and I think that comes out in my style.

The lyric “How are you lonely in a room with God?” on ‘Photosynthesis’ had a big impact on my life, even though I am not religious. What does your own faith look like?

I’m far from a religious person, to be honest. But I do have an extreme amount of faith: faith in myself, faith in my team, faith in my family, faith in every moment. My faith is always challenged by loss, grief and death, and all types of shit. But you have to have the true belief that you’ll get through that and you’ll persevere and there’s something better on the other side of that. That’s what faith really is.

On this album you recall selling your cassette in school highways. Now you’re famous, do you miss the anonymity of your childhood more?

Childhood, as difficult as it may be, is also lit. You just show up to shit as a child; you don’t got to know the answers to anything! I try to model my adult life off of the things that I would have wanted as a kid, you know? I pretty much live in a big ass kid’s house, from the studio to the video games. Me and my brother play the N64 all day! F-Zero X. Staying in tune with that childhood innocence is the most important thing creatively, because it keeps me honest and it keeps me authentic. I want to feel like a big kid forever.

Few Good Things is available on most major streaming platforms.

Linkedin
RELATED ARTICLES
OTHER ARTICLES
A 37-year-old woman shares how her abortion led her to become a clinic worker, and the abuse she’s received in that role.
Thousands attended the annual event this year to wheelie through the city and call for ‘knives down, bikes up’.
Yesterday thousands gathered outside Buckingham Palace after news of the Queen’s death broke.
For over a decade, gamblers have won big by employing people to place live bets from the court. But does this dubious method still work?
By turning a real-life crisis into daytime television fodder, TV bosses have once again shown themselves to be completely out of touch with audiences.
Sean Maung’s photos are a love letter to the Black and brown communities that make up New York.