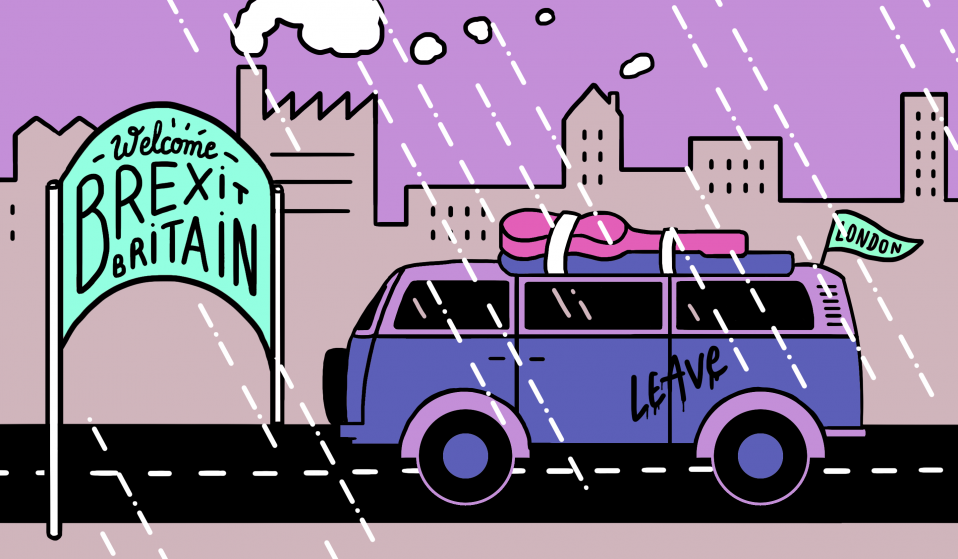 After being racially abused in the street, Vanessa Govinden had a frightening realisation: her band was about to tour a nation fraught with rising xenophobia. This is the story of how she overcame the panic.

After being racially abused in the street, Vanessa Govinden had a frightening realisation: her band Little Fists was about to tour post-Brexit UK for the first time, exposing to her a nation fraught with rising xenophobia. This is the story of how she overcame the panic.

Two weeks after Britain voted to leave the EU, I was walking down my street when a guy in a removals van shouted, ‘You’re fucked!’ as he drove past.

I was born and raised in West London, though my parents are first-generation immigrants from Mauritius.

They chose to give me a neutral name – Vanessa – with no religious connotations, which confused a lot of people when I was growing up. ‘Are you Hindu? Are you Muslim? What are you?’ 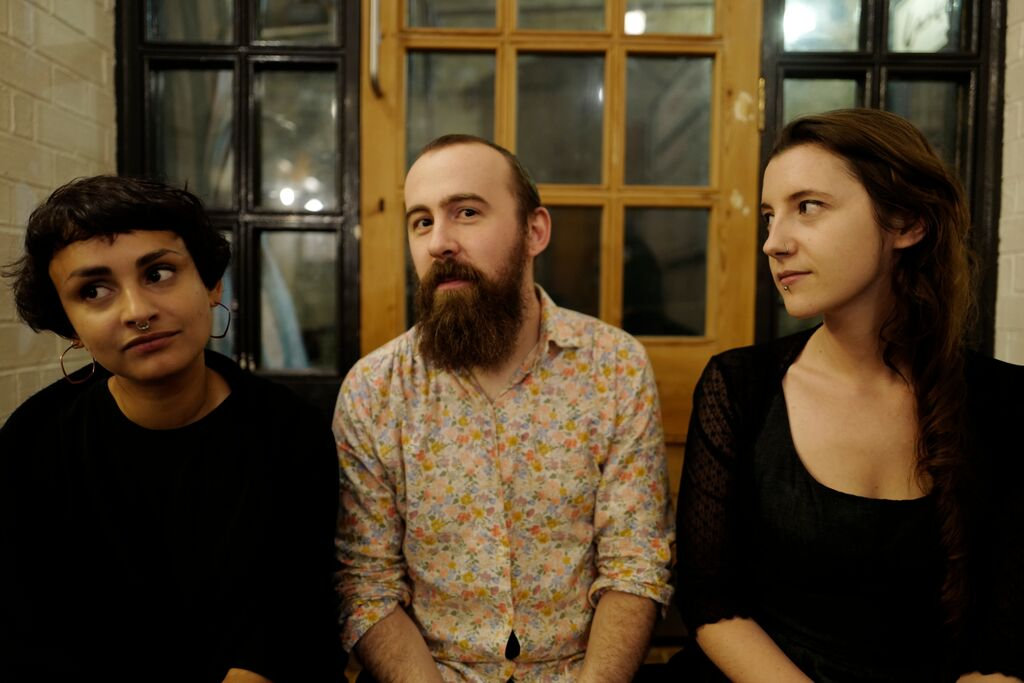 In truth, I was always a bit of a strange kid – a brown girl with dyed red hair and painted blue eyebrows, listening to punk, grunge and metal from the age of nine – who never really fit in until I found my bunch of misfit friends.

But two days after 9/11, I experienced a different sense of division. I was waiting at a bus stop when a car full of guys threw cans at me and shouted, ‘Go back to Pakistan, you fucking terrorist!’

That was the first time I realised that people could view me in the most basic terms – a dark-skinned person – and attack me for it. I’m not trying to play the victim here.

I just want people to know that this stuff still happens and that it can have consequences which aren’t always obvious.

That driver’s taunt rattled me. I had a friend’s birthday to attend that night but I didn’t feel up to leaving the house.

And that’s when it clicked: in two months’ time, my band would be heading on tour around the UK, playing places where the majority of people voted Leave. 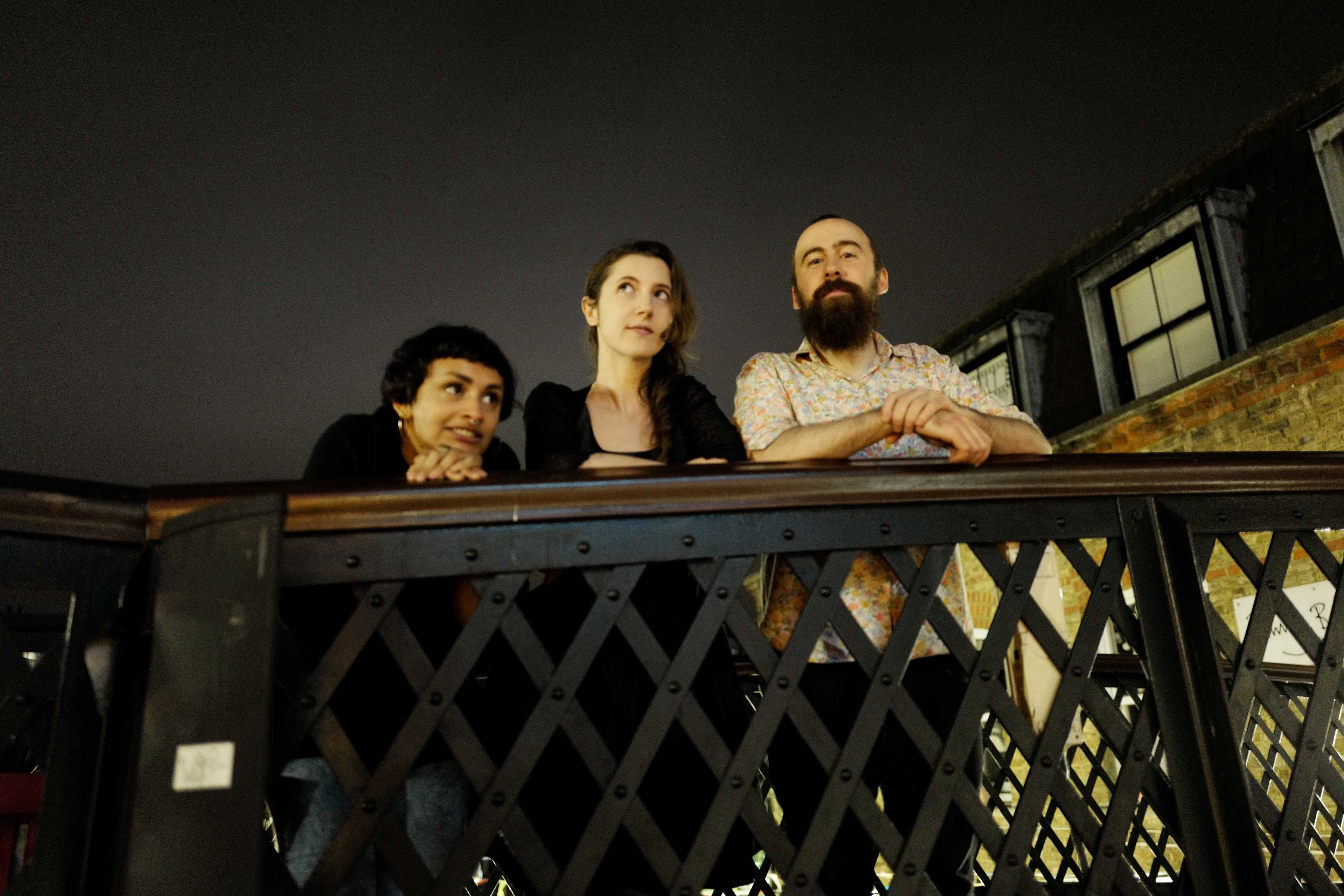 I play bass and co-vocalise in Little Fists, a trio from London inspired by the ethos of punk, Riot grrrl and queercore.

We decided to release a split seven-inch with Fight Rosa Fight! – a like-minded trio from Cheltenham who play the same type of shows: safe spaces and DIY venues, feminist nights and fundraisers – before going on a week-long tour together.

Then Brexit happened. Social media lit up with stories of people being openly racist and I braced myself for abuse. What had seemed like an amazing opportunity began to make me feel vulnerable.

The dread built up until I had a panic attack the night before the tour. My whole body was tingling – and knowing that I needed a good night’s sleep only made it worse.

It felt like the attack would set a trend for the week ahead: that there would be more nights like this regardless of what happened.

I knew there was every chance that the tour would pass without incident, that I’d be with people who had my back in any situation. But anxiety doesn’t work like that. Sometimes you just can’t reason your way out of it. 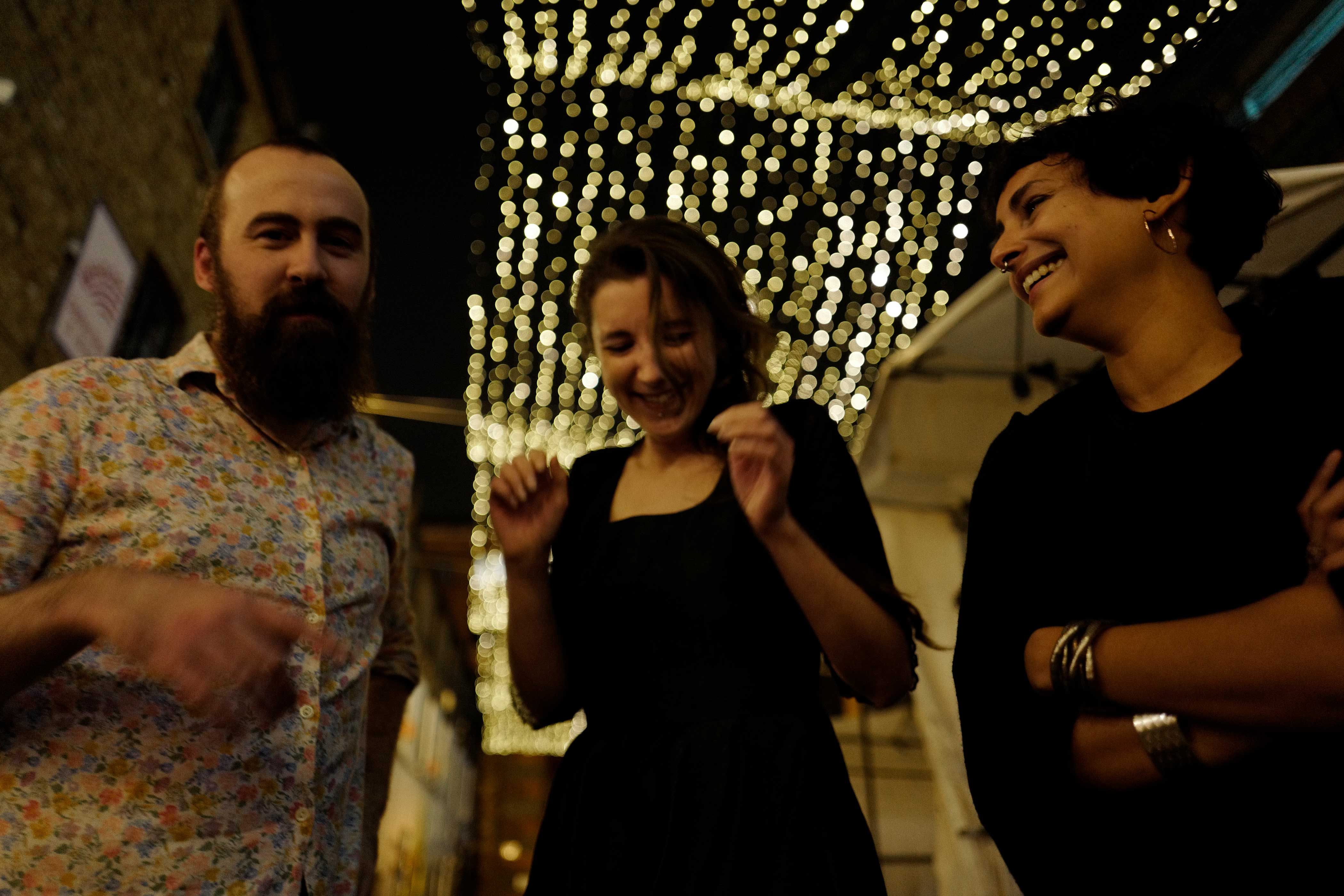 The next day, approaching the train platform as we were about to leave London, the dread intensified again. But I didn’t want to let my friends down and so I stepped on board, knowing there was no turning back.

The first date of the tour was Queer Fest Nottingham. Last year, when we played the Femmington Spa Queer Fest (in central Warwickshire), an encounter stuck with me.

The venue was in the basement of a pub where some of the regulars were curious to know what was going on downstairs and what was queer about it. One guy asked me, ‘Punk is punk. Why are you making it gay?’

At first I thought maybe he meant that punk was universal and that he couldn’t see any need to put labels on it.

So I invited him downstairs and explained the concept of a safe space – an environment where anyone can feel free to express themselves without fear of being made unwelcome on account of their sexual orientation, gender identity, cultural background or any other factor.

He responded by saying, ‘Yeah, but what if someone tries to bum me?’

I think that lack of awareness fed into my anxiety. This wasn’t just about racism. 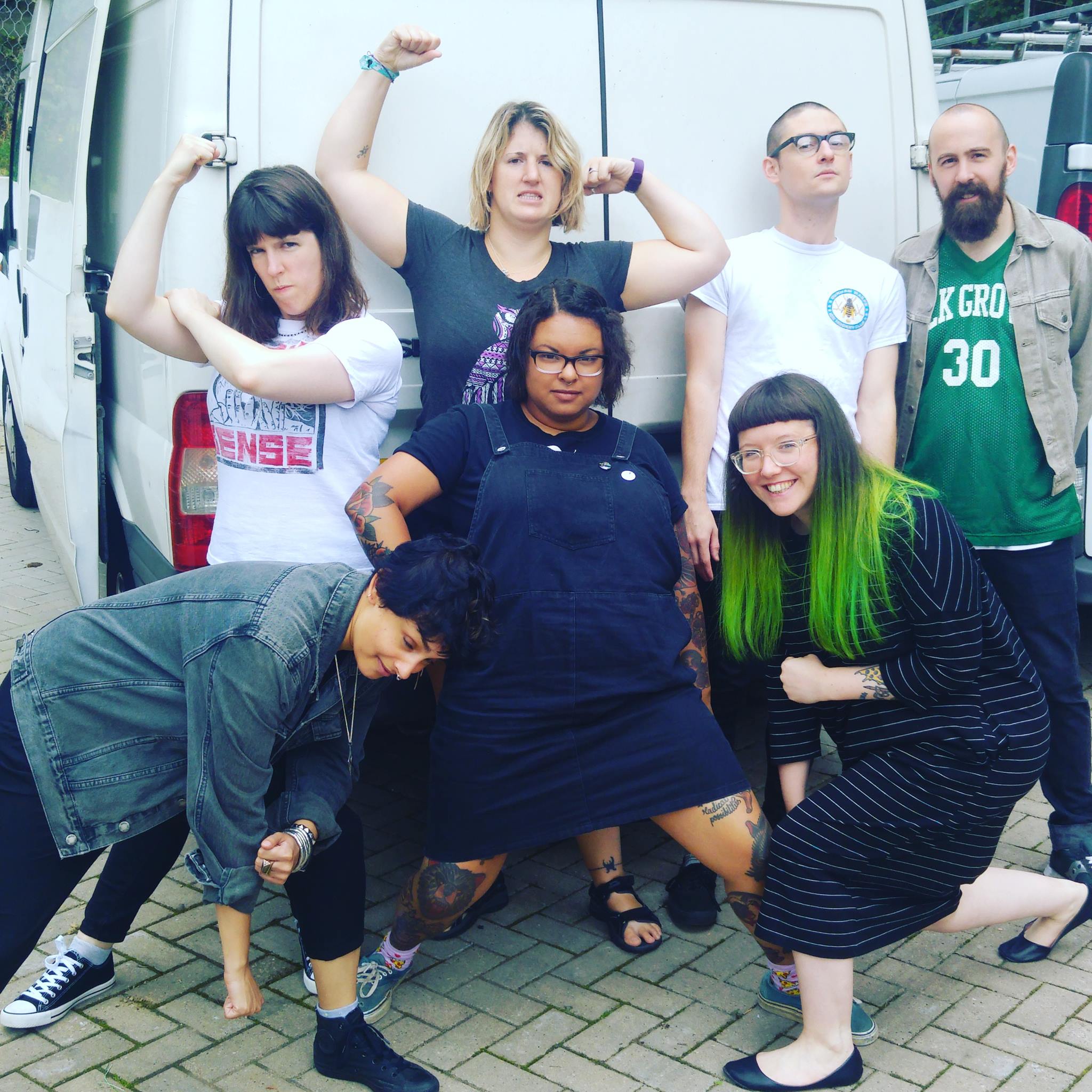 Little Fists and Fight Rosa Fight! on tour with their driver JC. Photo by Kate Rosanne.

Going on your first tour means putting yourself out there, in unfamiliar places, in front of people who may not see the world the way you do. And I have to admit, there were moments where I questioned the wisdom of doing that.

In Leeds, a friend had a bottle chucked at him and called a faggot while walking home from our gig.

In Liverpool, we popped into a pub to use the bathroom one afternoon and I instantly felt like we were going to get our heads kicked in.

Later that night, our guitarist and co-vocalist Ste (who is Irish) was questioned aggressively about his identity by someone on the street.

In Manchester, another panic attack struck the moment I stepped into a shopping centre. I have no idea what triggered it. That’s the thing about anxiety: it just announces itself without explanation, overpowering the logical part of your brain.

Soph, our drummer and co-vocalist, suggested we get some fresh air. While we were sitting outside a cafe, this man – a normal looking guy in his sixties – came over and got a little too close. He stared at me in disgust and grunted something unintelligible under his breath – a burst of primitive disapproval, basically.

Soph jumped to my defence but the guy simply walked off. That’s the thing connecting these incidents: there’s no conversation; people won’t even stop. It’s cowardly but it still really affects you. And the worst part is that you can’t say anything back. 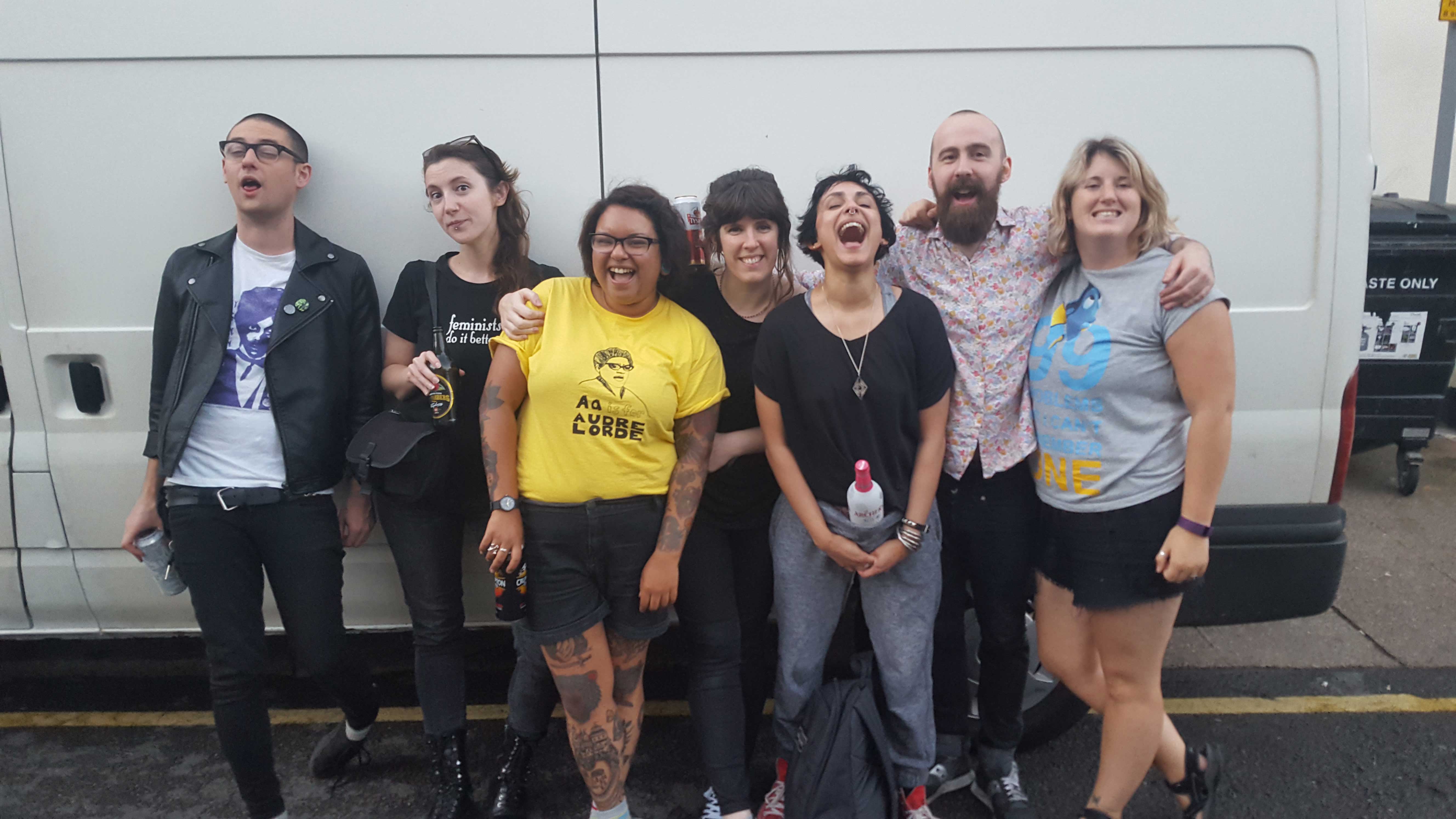 The best response was just to get on with the tour which – those moments aside – turned out to be an incredible life experience. The shows went well, the crowds were great and the two bands grew close.

Brexit came up a lot in conversation, but there was a lot less doom and gloom among people than I’d expected. Instead there was a sense of sticking together and getting through it, which, for me, is what the name Little Fists is all about: power in unity.

I’m not a natural performer. I enjoy being in this band but when it comes to playing live, there have been moments where I thought, ‘Why am I forcing myself to get on stage? We could easily just jam every week for the sake of catharsis.’

But by the end of the tour, I just wanted to keep going. My outlook felt much more positive.

Maybe it was the process of facing up to challenging situations, maybe it was realising how lucky I am to have such a supportive network, maybe it was taking comfort in the knowledge that DIY spaces are in much better shape outside London.

I just know the next time we go on tour, I won’t feel so anxious.

Linkedin
RELATED ARTICLES
OTHER ARTICLES
David 'Dee' Delgado’s photo project is about honouring and uplifting the city of his youth, and a world rapidly disappearing under the relentless onslaught of gentrification.
After building his reputation covering the US civil rights movement in the 1960s, the photographer went on to produce some of the most enduring images of the past century.
Since 2007, Gideon Mendel has made 20 trips to document floods in 13 countries. The result is an alarming record of what has already been lost to the climate emergency.
A new film from Berghaus traces the story of Adam Raja, who left behind a turbulent upbringing to discover the healing power of climbing.
Filmmaker Laura Poitras discusses her new documentary which traces the remarkable life of the artist-activist and the impact of her battle against the US opioid crisis.
The action took place in response to the 200 asylum-seeking children who were placed in hotels run by the Home Office who have gone missing.