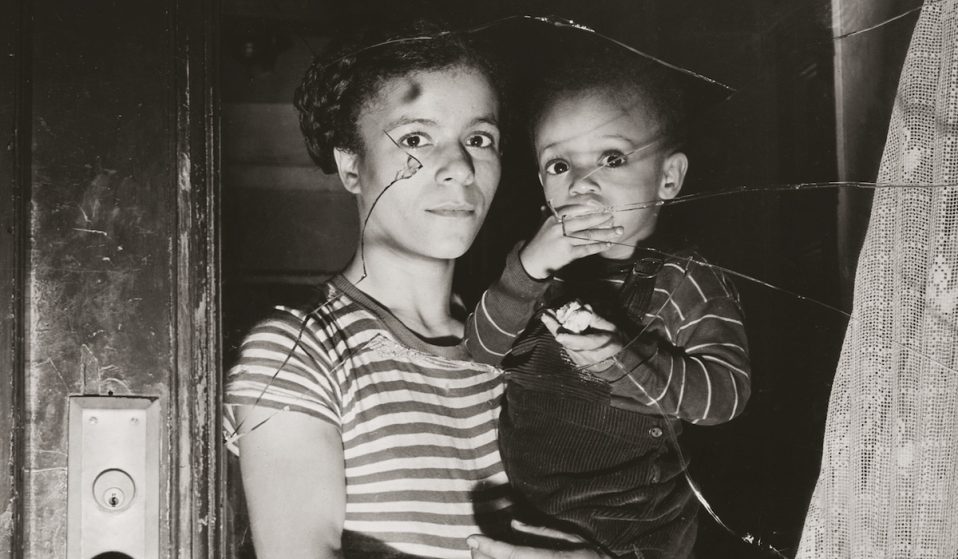 Photographer Weegee would spend his nights roaming the city, documenting its secrets, subcultures and forgotten inhabitants.

Photographer Weegee would spend his nights roaming the city, documenting its secrets, subcultures and forgotten inhabitants.

In July 1945, Weegee published his magnum opus, Weegee’s Naked City, a collection of photographs taken on the streets of New York, his adopted hometown. Originally released as a luxurious hardcover edition with gravure prints, the book was subsequently kept in print for more than eight decades as a paperback with halftones – an impressive run by any publishing standard.

But now, the book has been restored to its original glory in a new edition from Damiani/International Center of Photography. The latest edition comes with new texts by New York Magazine City Editor and Weegee biographer Christopher Bonanos, and ICP Weegee specialist Christopher George.

Born Usher Fellig in Ukraine in 1899, Weegee took up photography at the age of 14, just three years after his family emigrated to New York. Self-taught, he opened a photo studio in 1918 and started working as a freelance photojournalist in 1935. Over the next decade, he would amass one of the most compelling collections of city life, capturing the gruesome glamour and ghoulish truths in a series of snapshots taken mostly at night.

“Weegee had grown up very poor. He had no financial security. He had no personal support system; he wasn’t married. He shot to eat,” says Bonanos. “The game was to stay afloat. His method was to shoot all night long and he’d make rounds at the paper’s photos desks and he’d peddle whatever he shot.” 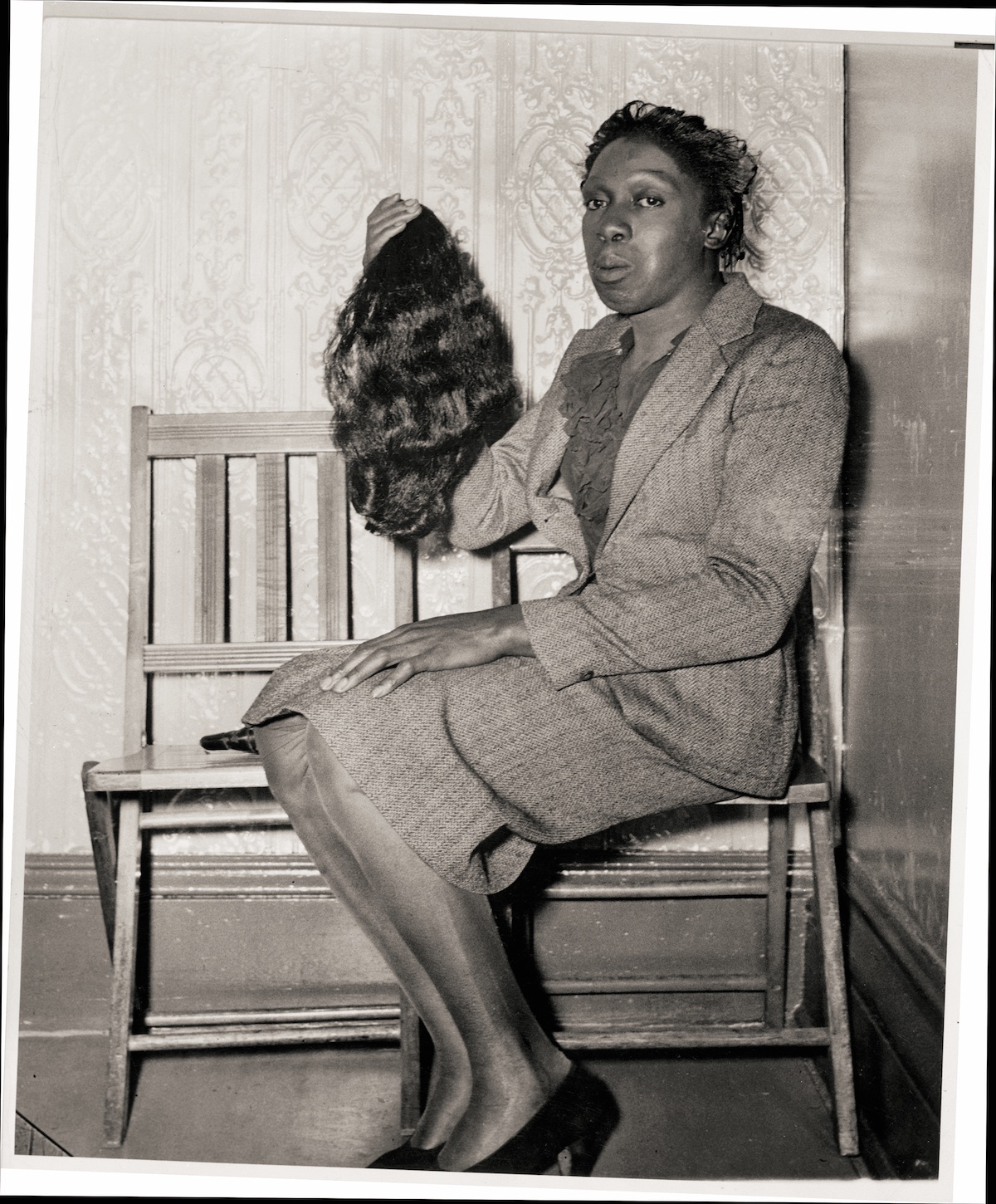 “Pie” Wagon. “The girl was arrested for picking up service men, luring them into hallways on the promise of a good time and then robbing them. When the police matron examined her, it was discovered that the lady was a man. Photo shows the prisoner removing the wig at the police station.” 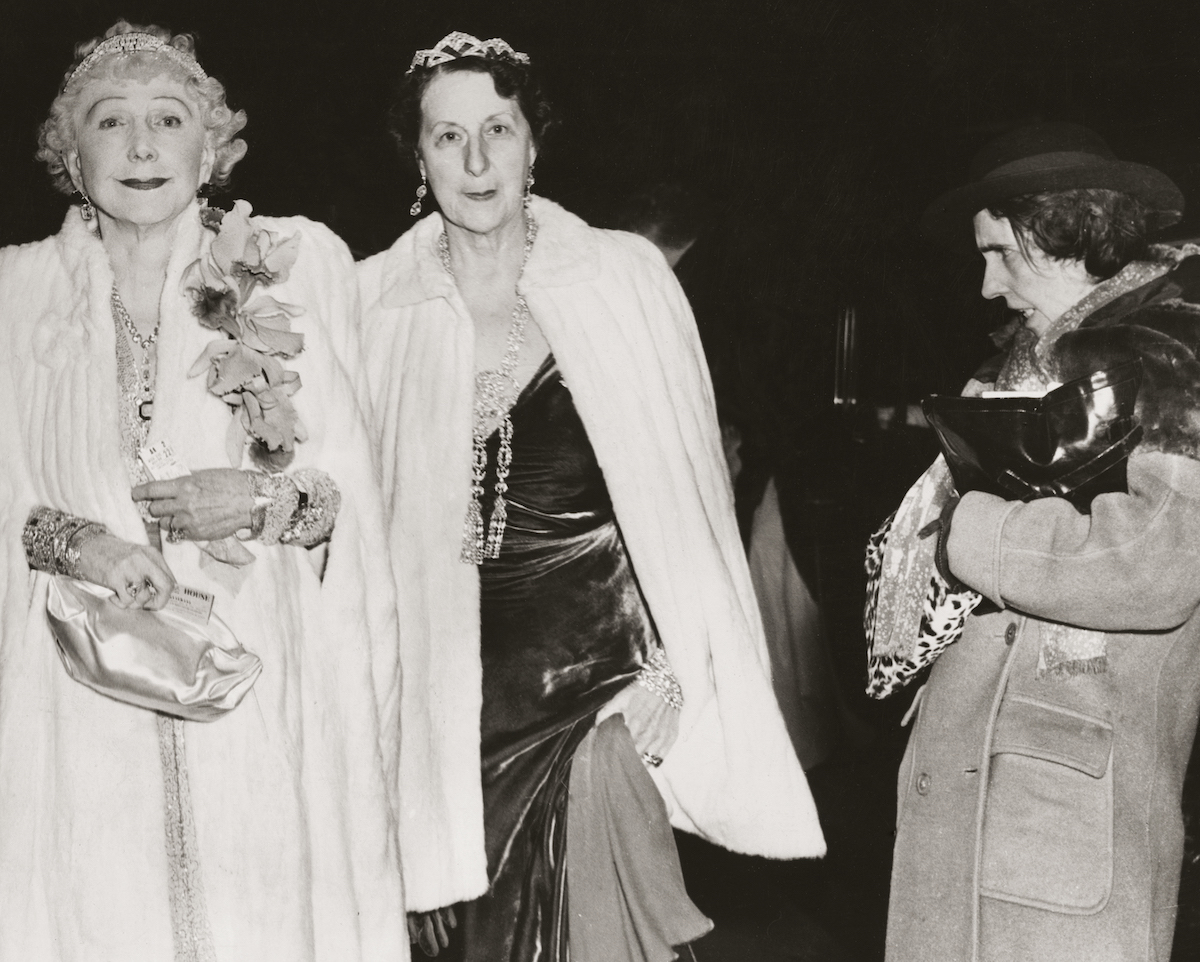 The Opera LIFE, December 6, 1943, 38. The Metropolitan Opens with a Russian Opera. “The Fashionable people were laden with jewels. Most bejewelled were Mrs. George W. Kavanaugh and Lady Decies whose entry was viewed with distaste by the spectator.”

“He would show up at the New York Post first at 6 am because he and the photo editor had a deal that if he showed up there first he could have a key to the darkroom so he could process the last stuff he shot that night. In the early ’40s, there were nine dailies in New York, and then he’d wind up at the wire services. He was shooting two, three, four stories a night, 364 days a year. He worked every day except Yom Kippur.”

“When Weegee is shooting people who are down and out, he is always sympathetic,” says Bonanos. “He’s fairly kind even when people are a mess. When he is shooting the well off, he’s not always as kind. His sympathies always seem to lie with the underdog, and they are pretty egalitarian.”

“There was an interest in this book as a kind of big statement from him. A lot of people in the literary and art worlds were interested in things that melded high and low culture. Weegee fulfilled that function as a photographer, explaining the underclass of the city to the overclass. It’s not exactly slumming but it’s a little like that, and you can do that from the distinction of your own home. Things were more stratified then and he was not. Weegee operated in both worlds.” 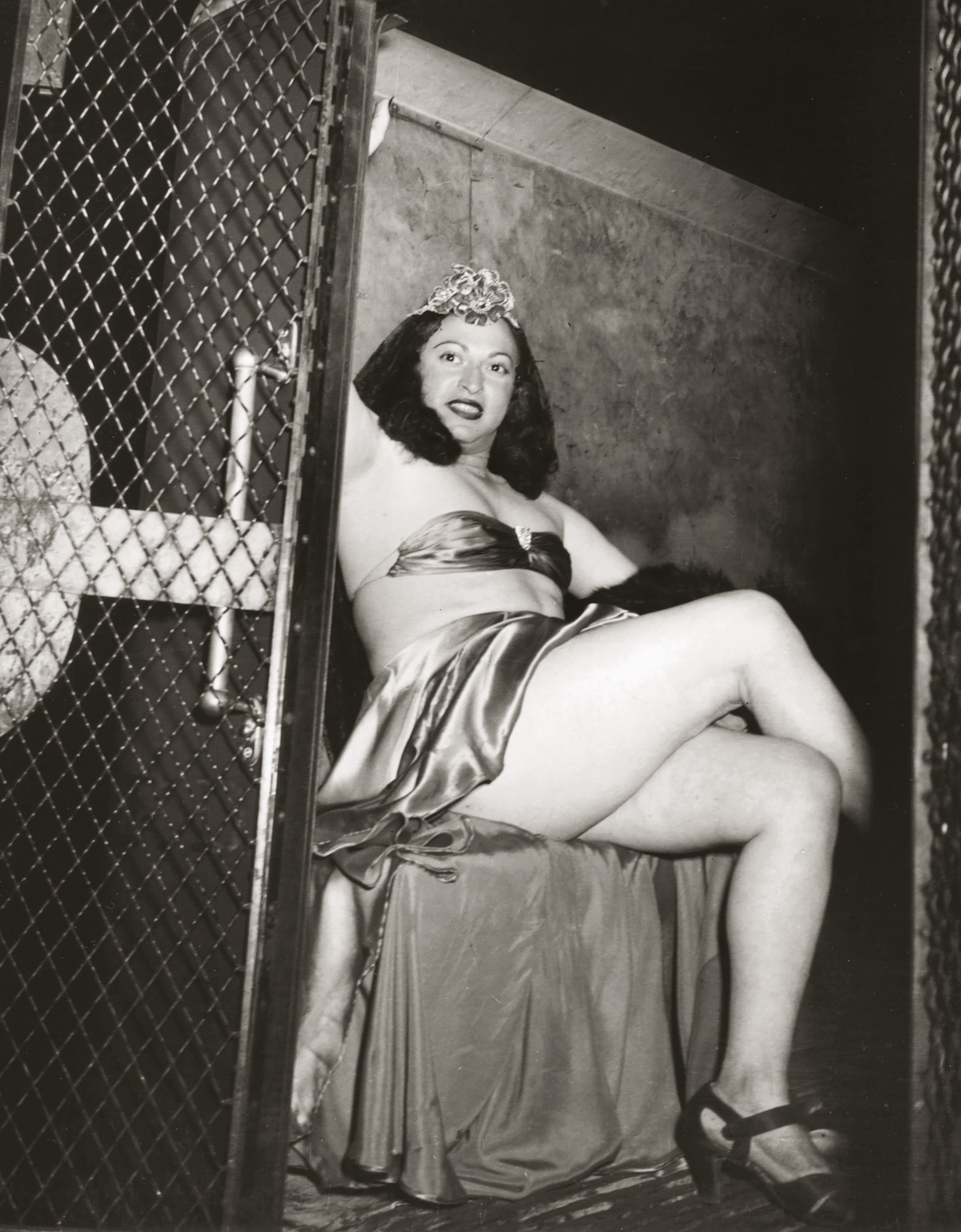 “Pie” Wagon. “These are men arrested for dressing as girls. The cops, the old meanies, broke up their dance and took them to the Pokey.” 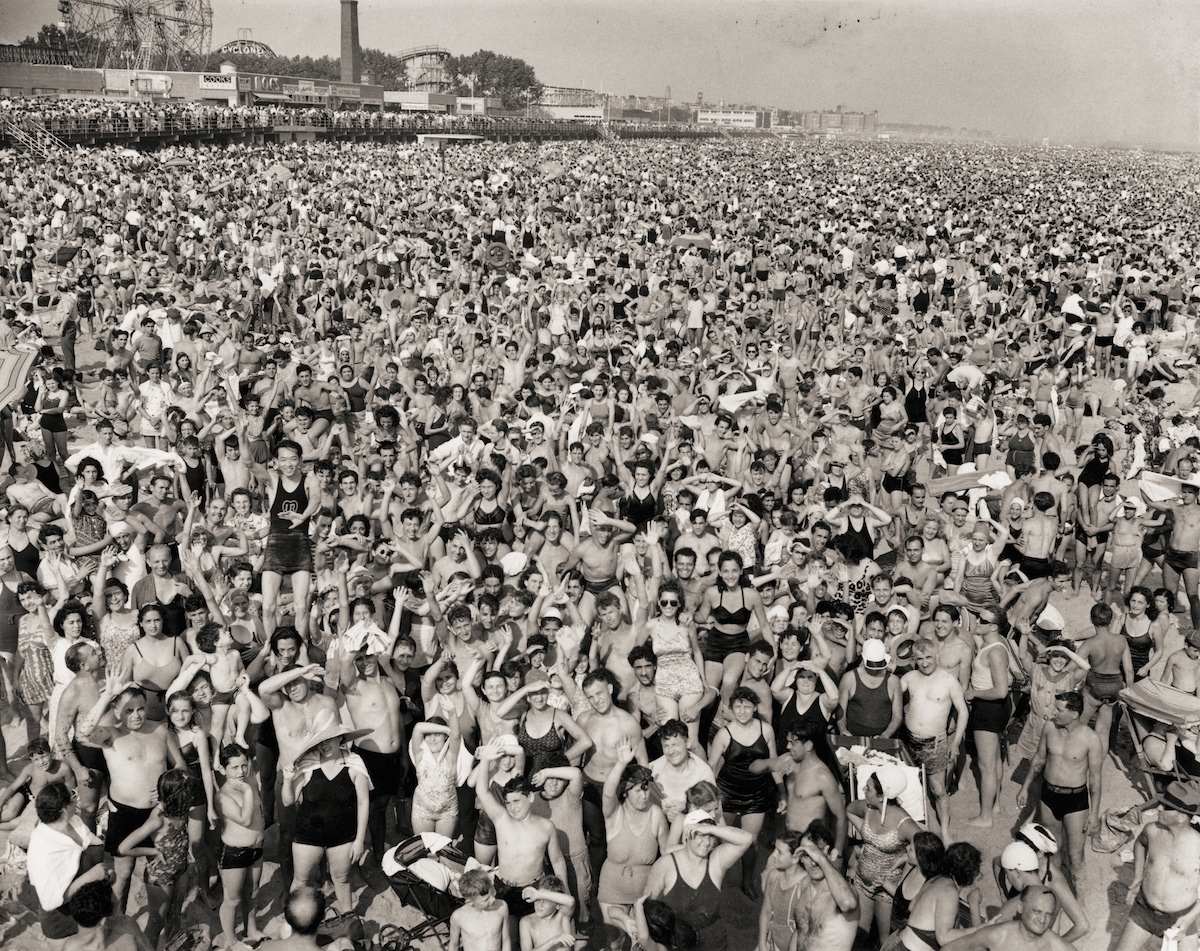 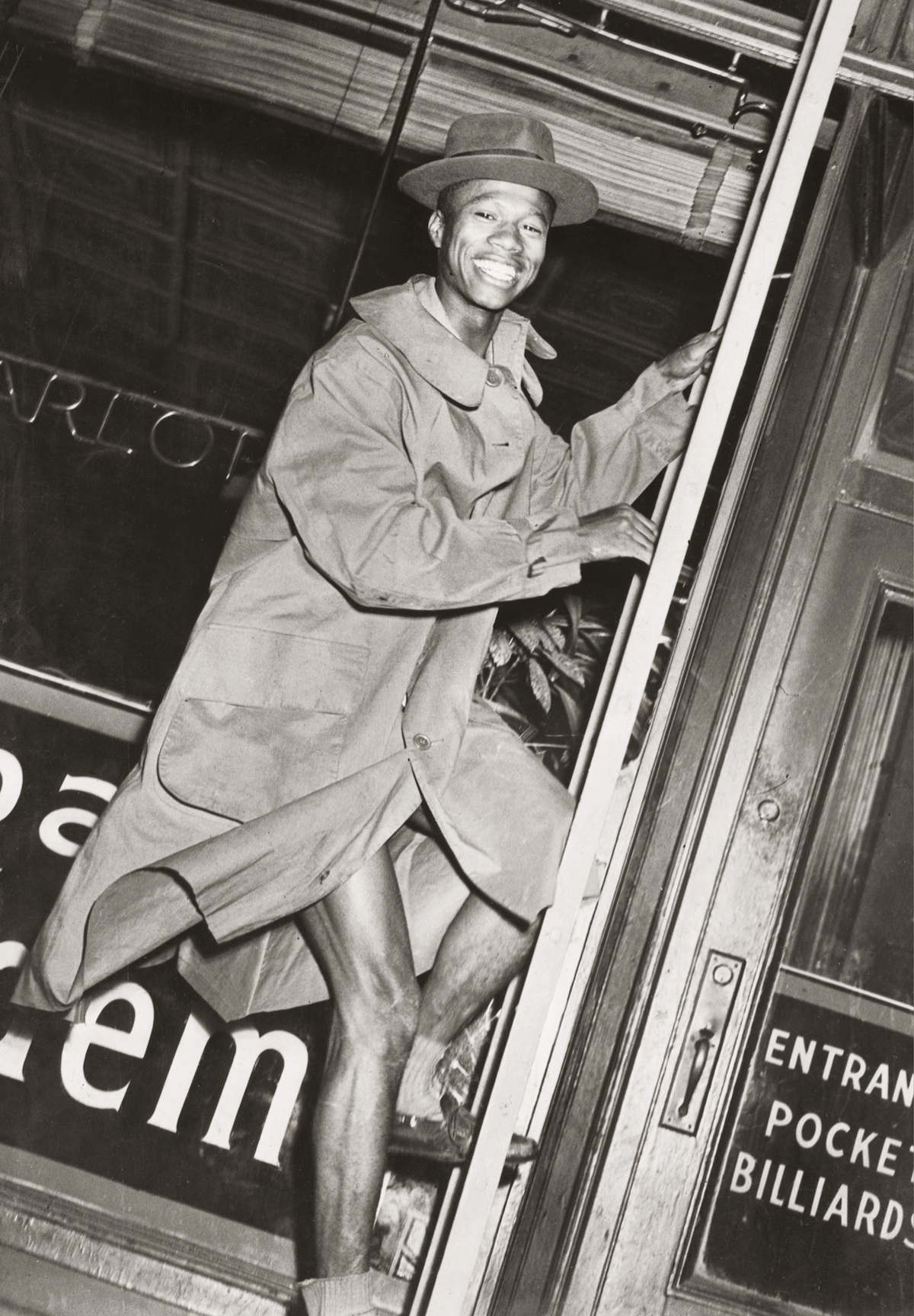 FIRES. PM, September 19, 1941, 20. “This man is fleeing a fire that roared through the elevator shaft of an eight-storey house on Edgecombe Avenue at 145th Street. An alert policeman smelled smoke and waked tenants. They used fire escapes.” 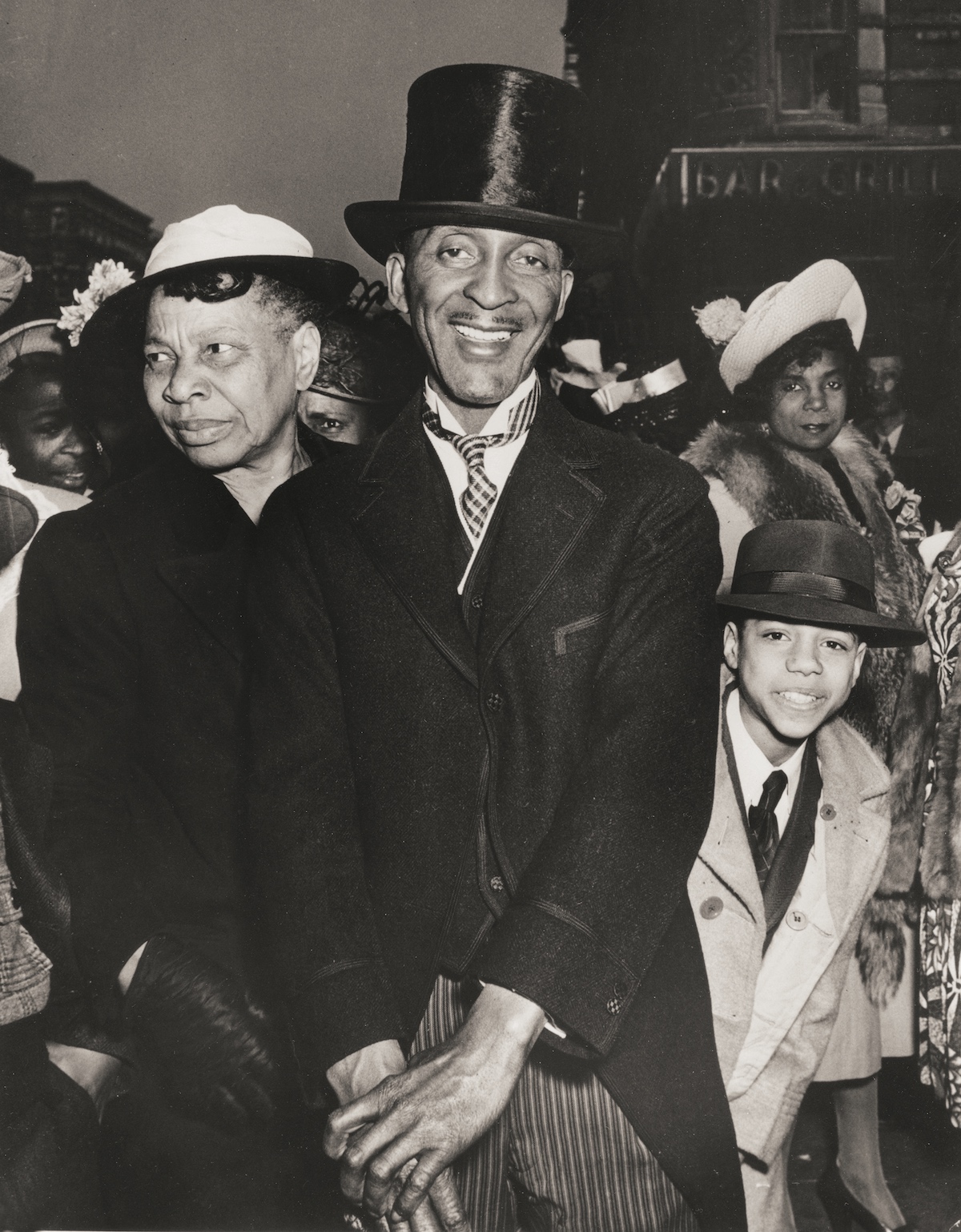 Harlem. “I spotted this happy man coming out of church, he told me that he was a clothing salesman and that every Easter Sunday he put on his full dress suit.” 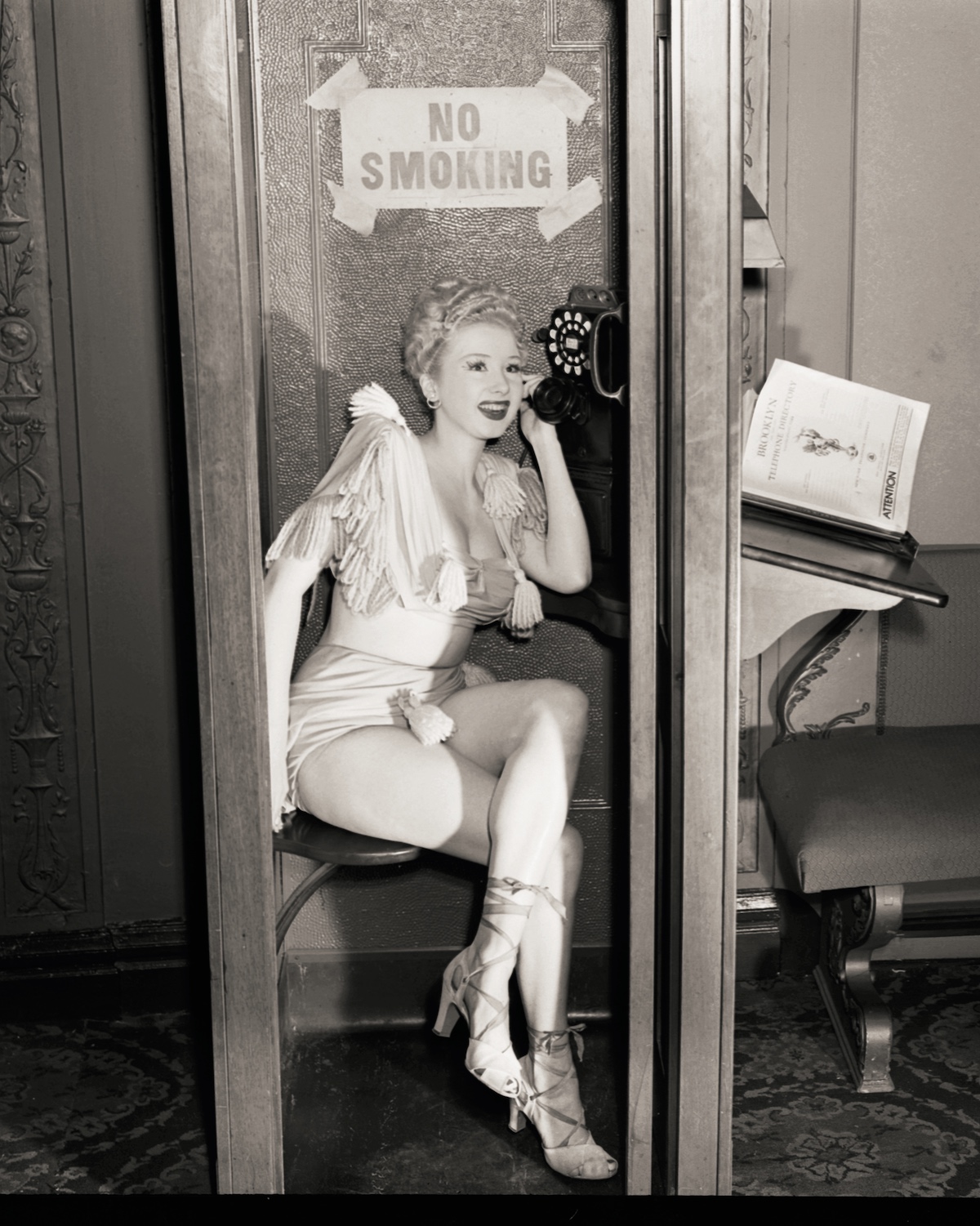 Odds and Ends. “A phone booth is a handy place to make a date” 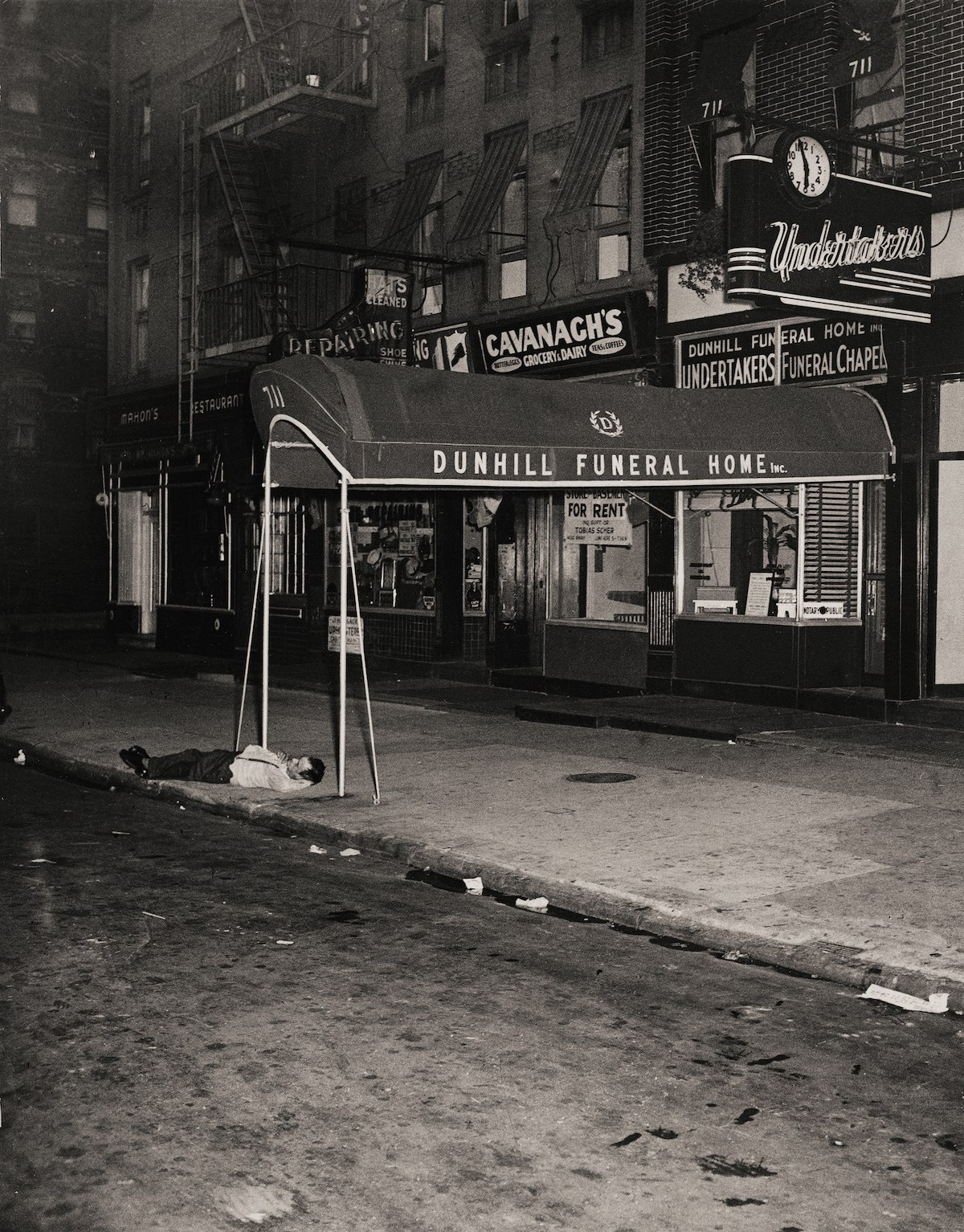 Sunday Morning in Manhattan. New York After Midnight. The Early Hours Bring Their Own Cycle of Events 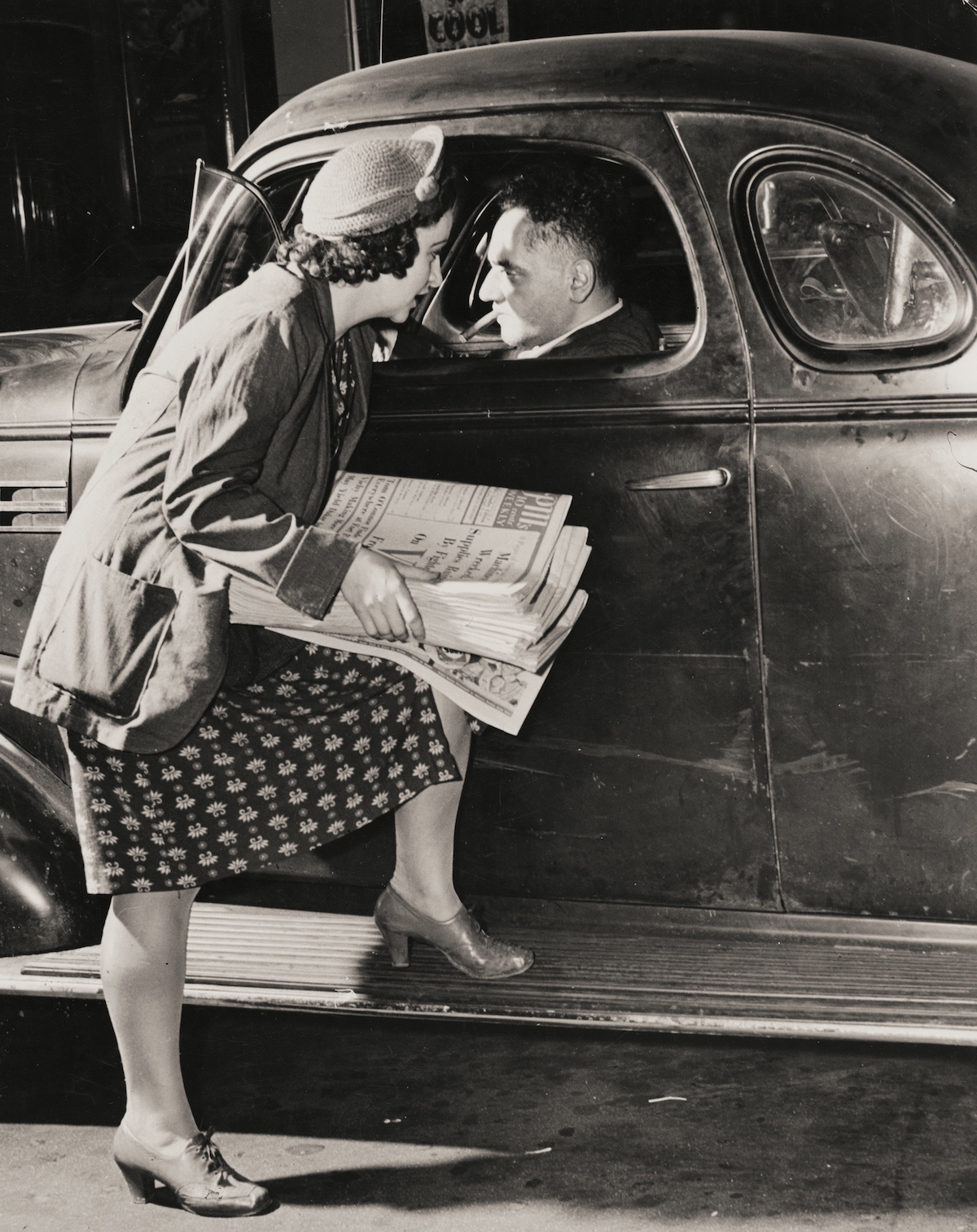 Odds and Ends. Weegee in his nightly tour of the city gets a tip from a woman news seller, 1941 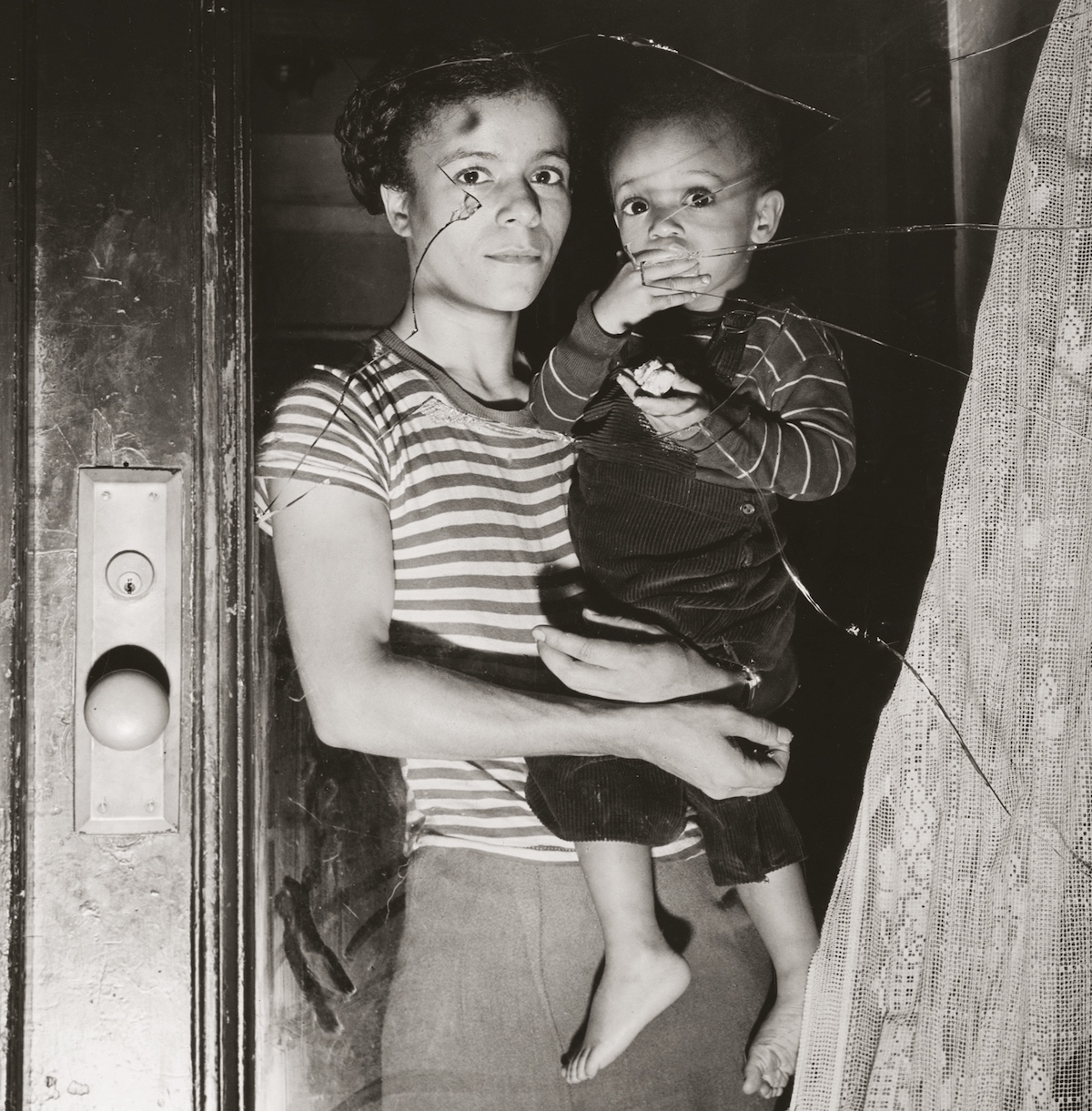 Harlem. PM, October 18, 1943, 12. “This tragic picture is a symbol of that evil thing, race hatred. Mrs. Bernice Lythcott and her one-year-old son Leonard look out a window through which hoodlums threw stones.”

Linkedin
RELATED ARTICLES
OTHER ARTICLES
Curator Antoine de Beaupré discusses his immense record collection and what it tells us about the intersection of music, photography, art, and commerce.
Whether it's partygate, the climate crisis or the spiralling cost of living, the fightback begins on the picket lines writes Tommy Vickerstaff
Wealth inequality and the rising cost of socialising is placing a strain on people’s relationships, reports Eve Upton-Clark.
In the wake of the decision by the supreme court to overturn Roe v Wade, thousands of protestors filled the streets to express their rage and anguish.
In the latest instalment of Photographers in Conversation, the chronicler of raves, protests and beyond explains why he’s drawn to such specifically visceral environments.
A new edition of a seminal book brings together iconic images of the band onstage in their full glory and backstage in moments of unguarded camaraderie.