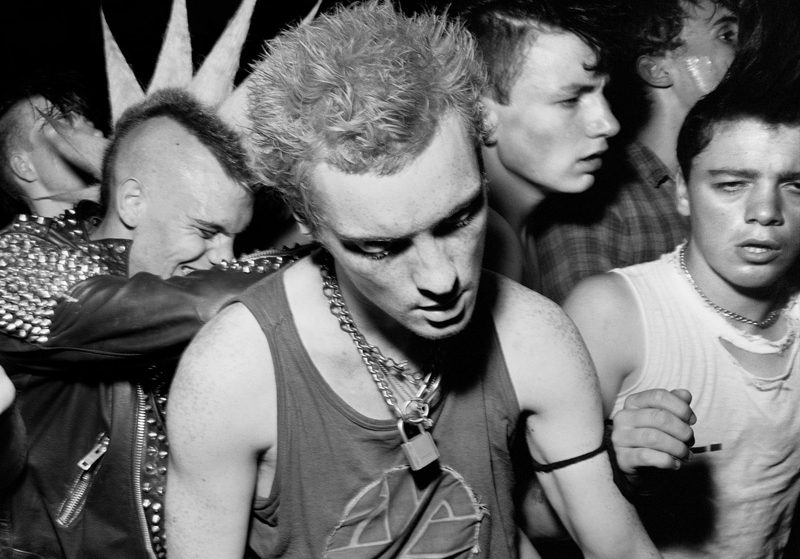 For decades, Killip’s shots of an old punk club sat gathering dust in a box. But in the cold light of day, they’ve taken on new meaning.

For three decades, the seminal photographer’s shots of an old anarcho-punk club sat gathering dust in a box. However, in the cold light of day they’ve taken on new meaning.

“I first stumbled upon The Station in Newcastle in 1985. It was just after the miners’ strike and things were pretty depressed. The north-east of England became de-industrialised in a very short space of time as the coal mines, steelworks and shipbuilding all closed down. Over the course of 15 years, I documented this mammoth shift and became known eventually as ‘the photographer of the de-industrialisation revolution’ – but it was by default. I was simply photographing what I saw.

“During this period, I would also photograph things at night; venues and events. One night, somebody said I should check out The Station – an anarcho-punk venue set up in an old police social club in Gateshead – so I went along the following Saturday and was blown away by the place. It was so different to anything else because it wasn’t a commercial space. It was owned by the people who were dancing there and the bands that played there – a group called the Gateshead Music Cooperative. 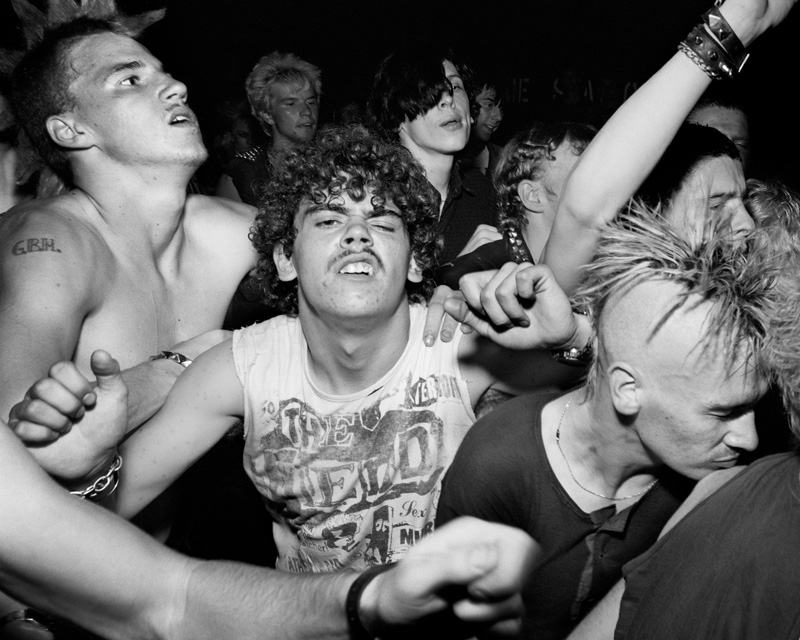 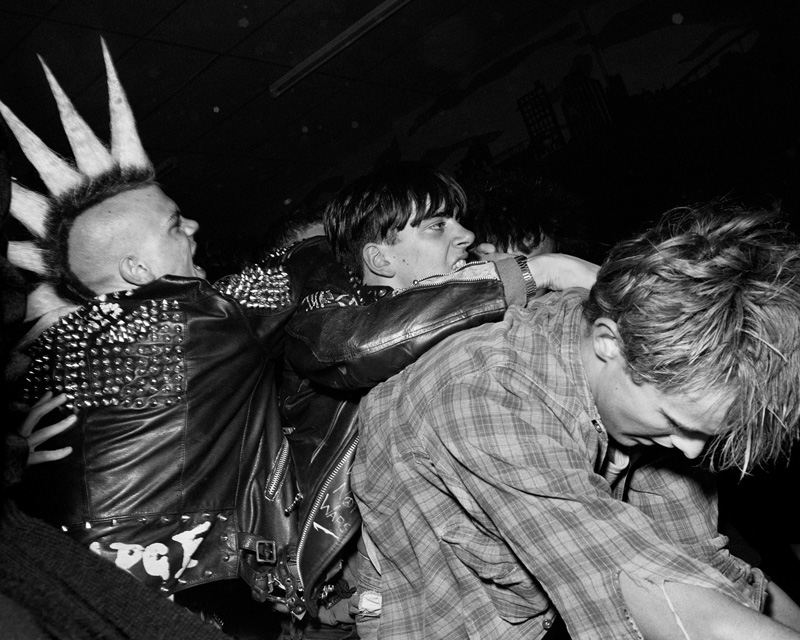 “These weren’t the punks of 1970s London; these guys were politically aware. They were very keen on animal rights and would often join the miners’ strike marches. They were unemployed and had very little money. But what they did have was cider and glue – which fortunately didn’t kill them – and they made the most of it. My problem was that they only had one outfit. They were good outfits: they worked on them until they perfected their punk look. But it meant that the nights all blended into one.

“Inside, the place was painted black. The ceiling was black, the floor was black. There were no lights. I was photographing with my big 4×5 plate camera and Norman flash. And in the end, there was a sameness about all the pictures. So after about six months I stopped because I felt I was repeating myself.

“I used one photo for my book In Flagrante and packed the rest away. I forgot I even had them. Then in 2016 my son was in my studio looking through some boxes and said, ‘Dad you should really do something with these photos.’ That’s how the book, The Station, came about. Looking back, I didn’t realise what I had. If my son hadn’t kicked me up the backside to go and look at them again, they’d still be in that box now. 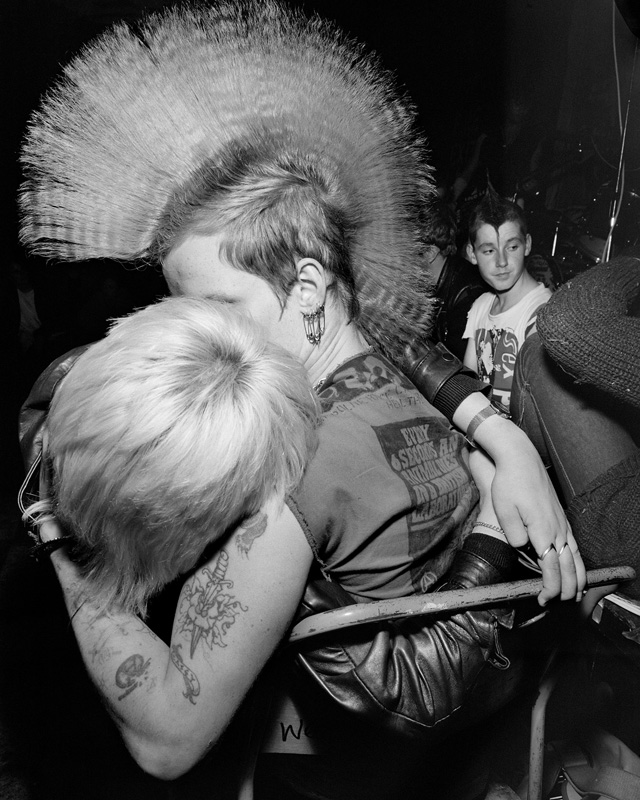 “The Station closed in late 1985. I don’t like writing about it because I can’t speak for people. I never talked to anybody when I was there: I had to concentrate, because it was difficult. I just came and I photographed. Years later, I put together a list of about 100 bands that played there. It took me about two months of contacting people online. The list isn’t complete but the names are fantastic. Imagine the publicity you’d get today if you were called ‘Eat Shit’.

“Nobody ever said to me, ‘Who are you? Where are you from? What are you doing here?’ But I must have looked so odd. I was 39 with silver-grey hair and I always wore a suit, because it had these false pockets where I could stash my camera. Nobody ever questioned me. Ever. I just came and went with the understanding I could be there.

“Recently, I got an email from a guy called Malcolm who was the leader of a band called ‘Hellbastards’. He could name everybody in all the pictures, he could name all the bands, and he was just so knocked out by it – that there was now this permanent record of that time. About four years ago, I put 12 big prints in a show at the Baltic in Gateshead. People contacted my wife on Facebook with pictures of the original punks going to my show with their families. They were white-haired or bald with big beer bellies and their children and grandchildren were looking up at them as if to say, ‘Grandpa, is that really you?’

“There is a great value in capturing these cultural moments. It’s a part of somebody else’s history, and it’s a history that gets overlooked. Young people doing something – succeeding at doing something, organising this club, running it successfully – it’s all forgotten. My hope is that it can be an inspiration to young people today. As in: get your act together, don’t ask permission, get on with it and do it. Raise some money, you know. That’s what they did.” 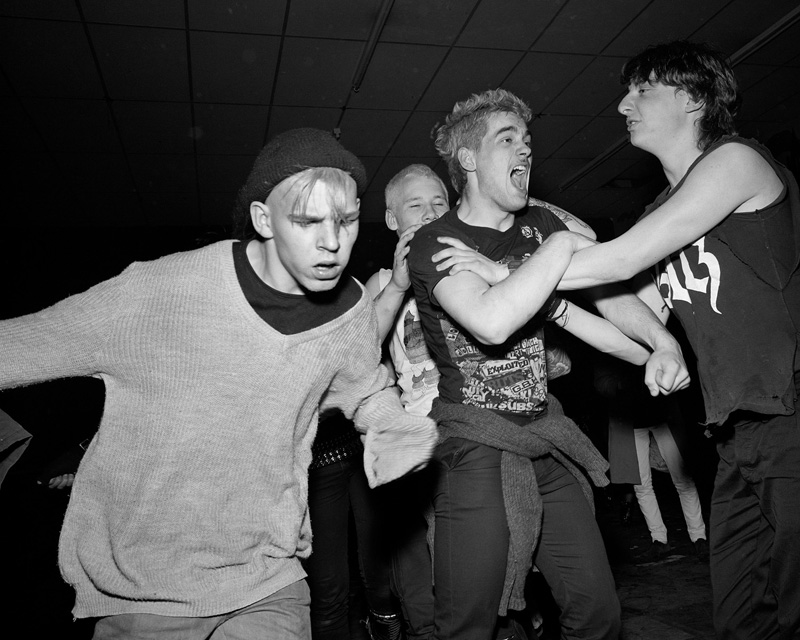 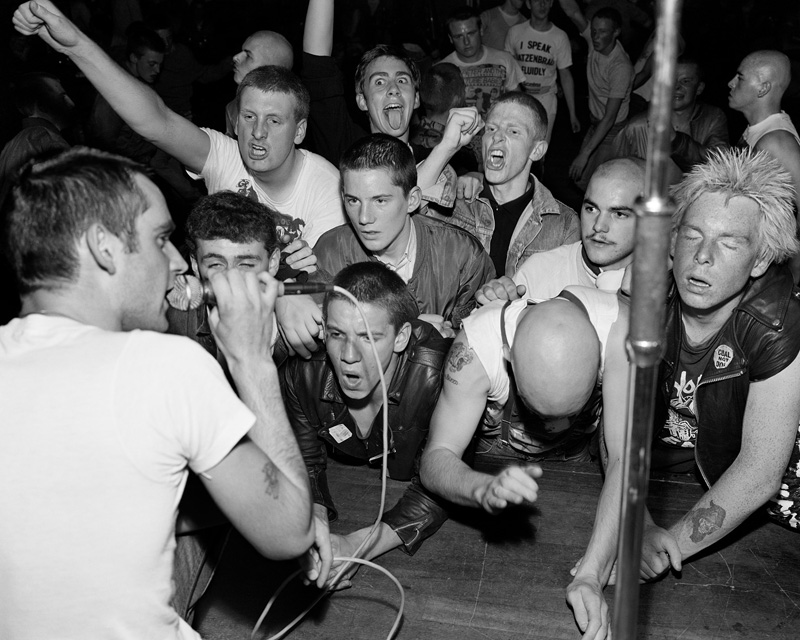 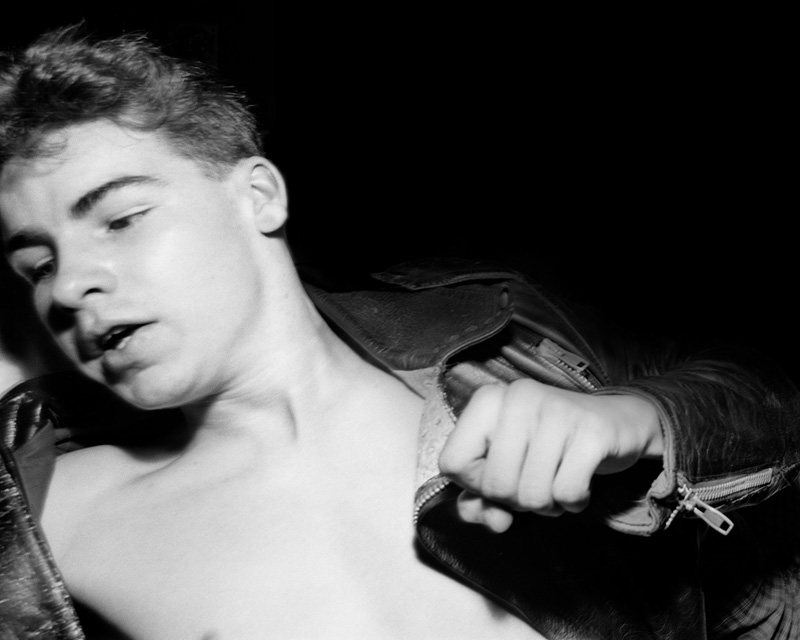 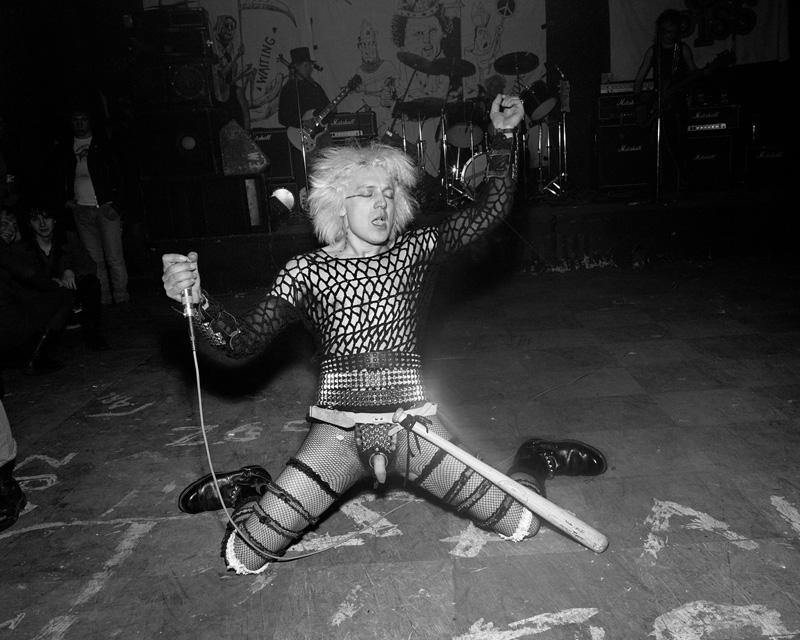 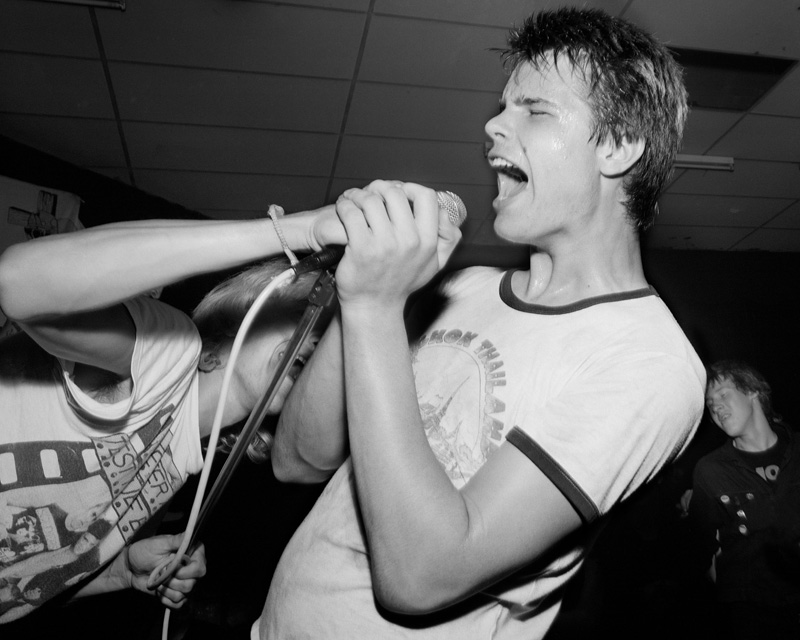 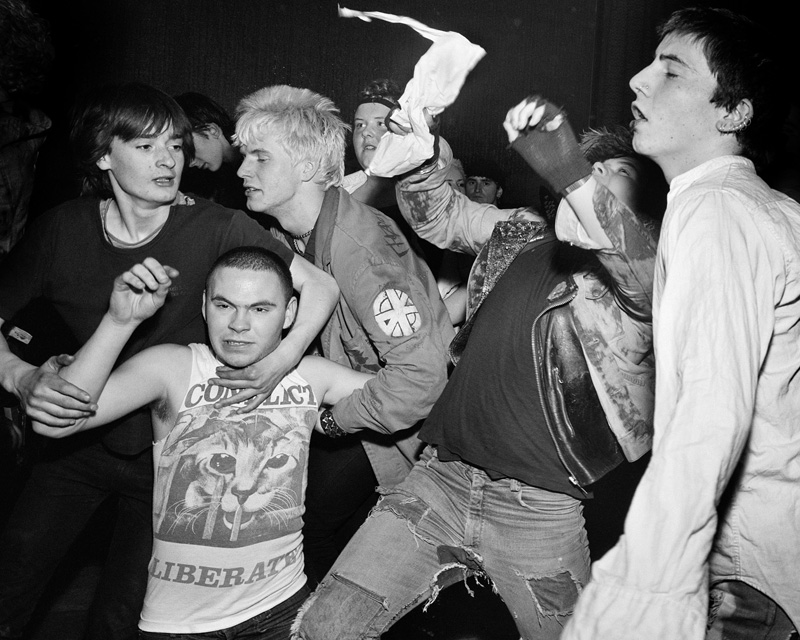 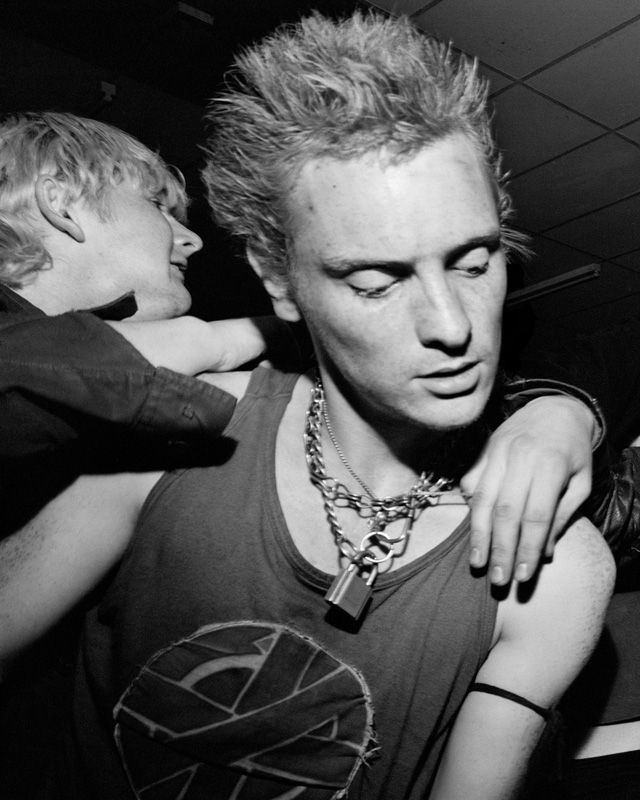 As told to Andrea Kurland.

The Station is published by Steidl. The exhibition is showing at the Martin Parr Foundation 13 August – 11 October 2020.

Linkedin
RELATED ARTICLES
OTHER ARTICLES
A group of young Palestinians have found temporary freedom in the act of parkour, reimagining wreckage and ruins as a series of high-octane playgrounds.
Birdy Chu reflects on documenting the historic moment in which the territory was formally passed back from the UK to China.
Financial turmoil is pushing people who work in the sex industry into more dangerous and desperate situations as a means of survival.
Rhiannon Adam spent three months capturing an ageing society wracked by division, isolation, and the aftermath of scandal.
A new project is documenting formerly incarcerated people as they transition back into civilian life.
Thousands attended the annual event this year to wheelie through the city and call for ‘knives down, bikes up’.