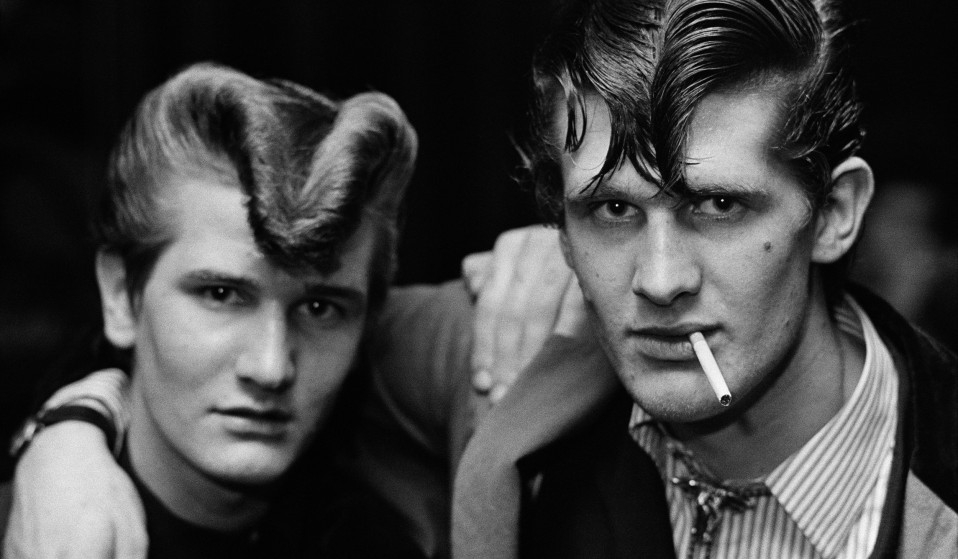 Magnum photographer Chris Steele-Perkins reflects on the enduring legacy of The Teds as his classic documentary series goes on display for the first time in nearly 40 years.

Magnum photographer Chris Steele-Perkins reflects on the enduring legacy of The Teds as his classic documentary series goes on display for the first time in nearly 40 years.

Let’s play a little game. Start with any British teenage subculture, trace back its lineage and you’ll arrive at the same place: the Teddy Boys.

Long before the Ravers fought with police at illegal parties in the ‘90s, the Punks were fighting with the Thatcher government in the ’80s, and the Mods and Rockers clashed violently with each other on Brighton Beach in the 1960s, the Teddy Boys set the fires to the very first first teenage riot.

When the Bill Haley film Rock Around the Clock arrived in the UK in 1956, eager Teds (as they were also known) erupted: cinema seats were slashed; fireworks and bottles thrown; shop windows smashed; and police battled with throngs of jiving, singing teenagers. Nothing of the sort had been seen before. It caused Britain to wake up in shock to the existence of the teenager, kicking off a moral panic that swept through the media and the middle-aged over ‘feral youth’ and ‘the teen menace’. 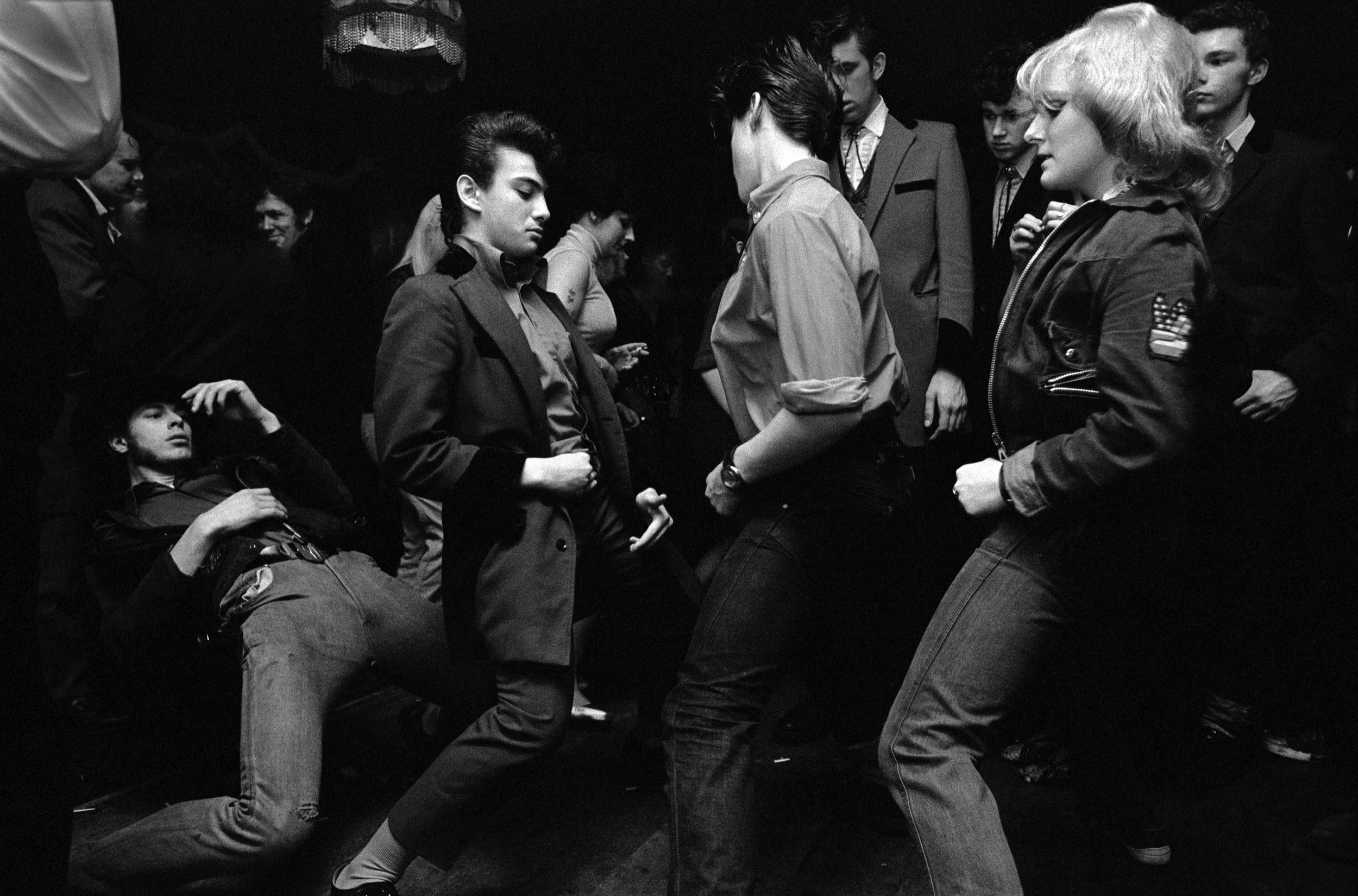 Emerging from the post-war gloom in the 1950s, the Teddy Boys or Teds were Britain’s original teen subculture and set the template for all young tribes that would follow in their footsteps: the Mods, Rockers, Punks, New Romantics and beyond. Inspired by American Rock and Roll and the Edwardian Dandies, the Teds’ style was sharp and bold: Brylcreemed quiffs, drainpipe trousers and beetle-crushers.

Magnum photographer Chris Steele-Perkins witnessed the emergence of the Teddy Boys in the 1950s as a child, but when they appeared once again in a third-wave revival in the 1970s, he set out to document this maligned and misunderstood subculture.

From 1976 to 1979, Chris photographed the new wave ‘plastics’ alongside the 1950s ‘veterans’, and found the ‘plastics’ were much more than shallow copycats, but took the movement forward until it was superseded by the Punks and others who followed.

Shooting the Teds in striking black and white and capturing the fashion of the movement and the dance halls, pubs and seaside promenades that nurtured the scene, Chris’ series has become a classic of British social documentary photography. 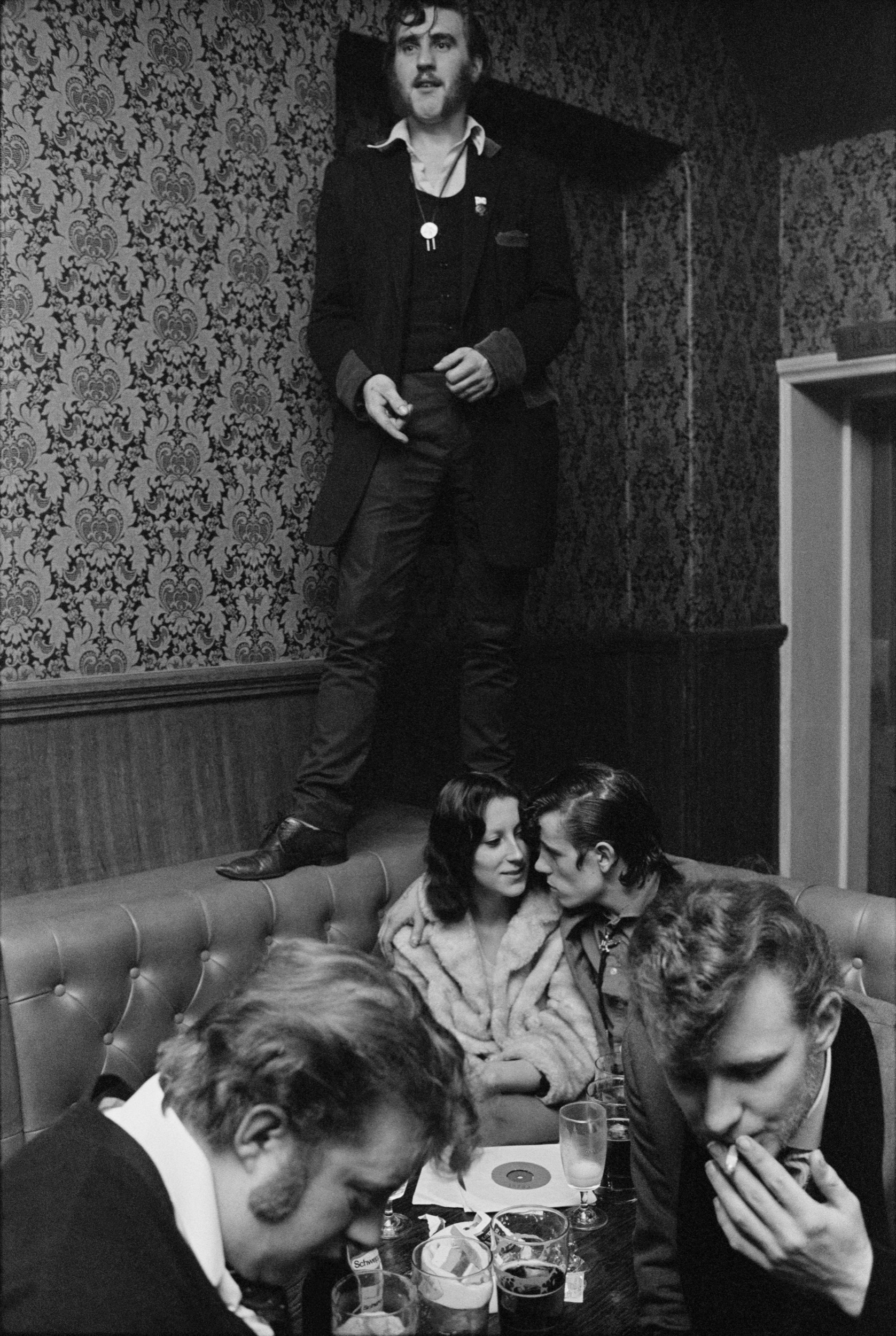 What drew you to document the Teds’ revival in the 1970s?
The Teds started as an assignment for a small magazine called New Society, with a friend of mine who was a writer. It was a two-day assignment on this weird and interesting Teddy Boy revival, which eventually developed into a two-year project. I started in the pubs they were hanging out in and went on to document more and more aspects of the culture.

I suppose the ’70s were a revival, but the Teds were really the seminal moment when teenage rebellion became something that was universally understood. The Teds were really first manifestation of that. It was a post-war working class culture, where youth had disposable income and all the elements of a culture: they had their own music, dances, clothes and slang, to some extent, they had their places to hang out. It was multifaceted.

Do you have any memories to the first wave in the 1950s?
I remember doing my hair in a quiff in front of my bedroom mirror and I actually bought a pair of winkle-picker shoes, which my father threw on the fire. So it’s in the back of my memory but I was too young to take part, had I ever wanted to be part of it. As a young kid, it was pretty glamorous. 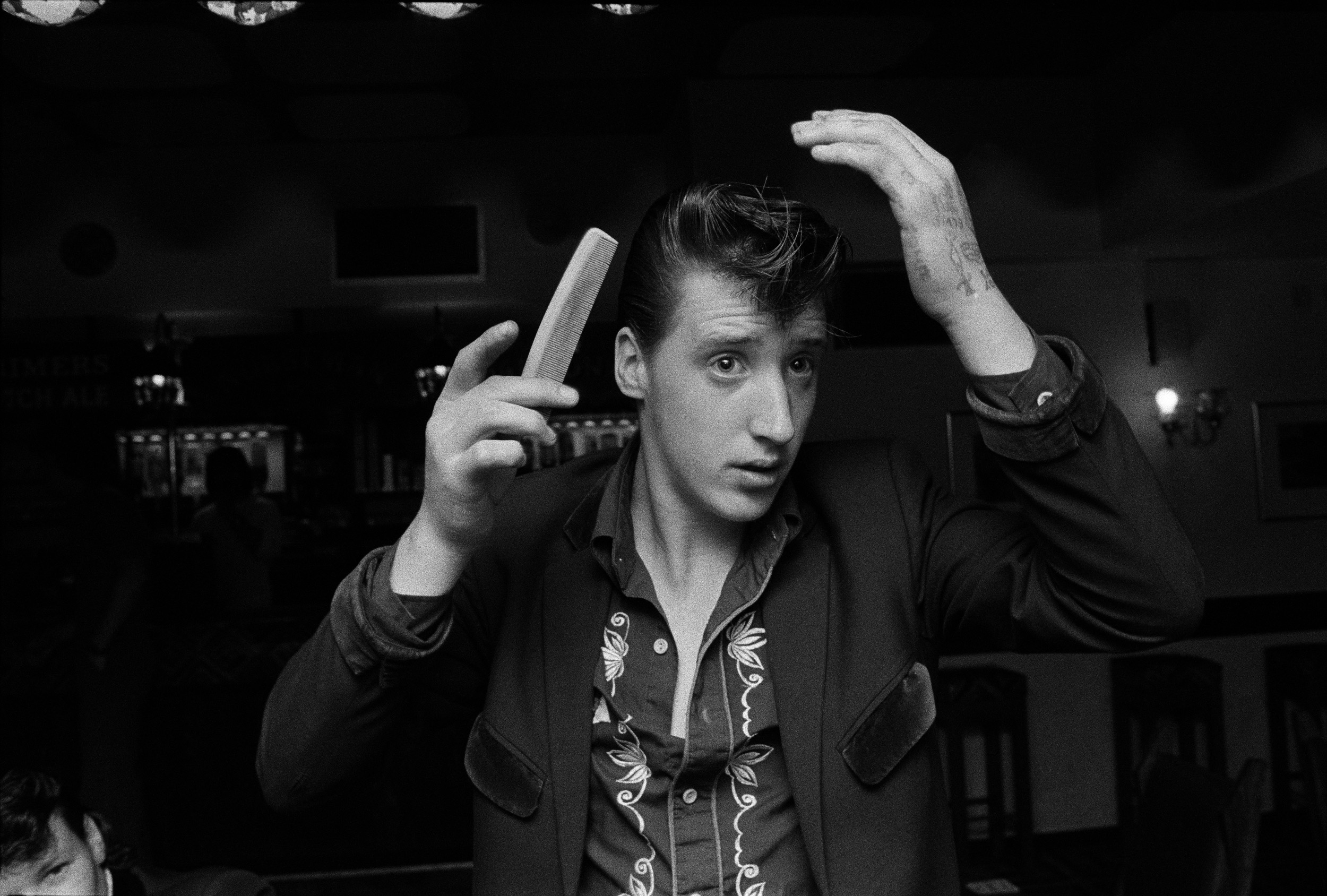 How did you see the culture change between the first wave and the ‘plastics’ in the 1970s?
Some of the people who had been around in the ’50s were still around in the ’70s. It was fascinating how they had become keepers of the faith and the orthodoxy. The rebels became the reactionary element, almost. Saying things like, ‘drapes can only be black’ and ‘they can only be finger-length’, there were sartorial rules that they felt had to be maintained.

Clearly they were copycats at the beginning but they went on to modify the dress code. These are small things but they’re quite amusing. Hairspray had come into existence, so you could do a quiff that sat like a trumpet, greasy Brylcreem wouldn’t hold it. But with hairspray you could achieve a whole new level of quiff. They were colouring the velvet colours and the velvet sleeves of the Edwardian drape with bright luminous colours, as opposed to the traditional black, sombre, dark colours.

More importantly, there were black Teds. In the first generation, the Ted culture was known for being racist. It’s not as if racism didn’t exist in the ’70s, of course it did, but black Teds were accepted, although there weren’t many of them. Also, the music. People were going back to some of the black music rather than the white music that had inspired a lot of the early Rock and Roll music. It was evolving, to a degree.

What has been the most important cultural legacy of the Teds?
In the continuity of all these different youth subcultures that followed. There were the Teds, then there were the Mods and the Rockers, then the revival generation of the Teds got replaced by the Punks, then there were the New Romantics and then you got the Northern Soul-ers. This whole, massively fertile range of youth culture that evolved mainly out of Britain was, I think, part of the legacy of the Teds. It reverberated down through the history of youth culture.

Today people are very critical of the obsession with retro and suggest that looking back is a sign of conservatism and a lack of imagination or new ideas. Do you think that’s a fair point to make, and is it relevant to what you saw in the Teds revival?
Well, I think it’s a bit condescending. We constantly reference the past, reinterpret it, regurgitate it and the re-live it. It’s the cycle of being alive, almost.

If you still like early Rock and Roll music for its own sake, why not. It’s there to be discovered. It’s almost like saying that if you’re interested in classical music, you shouldn’t be interested in Mozart because it’s not new.

I believe that each of the waves of the youth cultures that developed in Britain were influenced by the ideas of earlier generations, even if it was to deliberately reject them. Part of the motorbike ‘Greaser’ idea gave rise to the Mods, whose idea was to be clean, tidy, neat and cool, rather than loud, greasy, dirty and violent – although they were both quite happy to go and have punch-ups with each other.

It’s a continual feedback loop. You look back and you pick up this. Even the Teds were very creative, they were taking the Edwardian dinner jacket from the upper classes and restyling that to say, ‘No, this is us mate’. They adopted bits from American youth culture too and mixed it all up, which was fantastic.

Chris Steele-Perkins’ series The Teds goes on display for the first time in nearly 40 years at Magnum Print Room, London, 21 September – 28 October 2016. A redesigned version of The Teds book, first published in 1979, is released by Dewi Lewis.

Linkedin
RELATED ARTICLES
OTHER ARTICLES
After fleeing the war in Ukraine, people are finding it impossible to secure affordable and decent housing in the UK.
Taking us through one of the most dynamic years in recent history, Laylah Amatullah Barrayn new photo book contains tender yet confrontational portraits.
From snake handlers to mardi-gras revellers, Tom “TBow” Bowden’s photos provide a snapshot of the wonderful and weird people who make up America.
Jeffrey Henson Scales intimate portraits and protest images of the BPP and its leaders offer a rare insight into organisation at a time of societal upheaval.
After a two-year hiatus and a new album, the Nigerian artist is riding high. Now, he wants to bring his alternative, genre-bending sound to the world.
David 'Dee' Delgado’s photo project is about honouring and uplifting the city of his youth, and a world rapidly disappearing under the relentless onslaught of gentrification.