News & Politics / Activism / How women radicalised the world of self-publishing 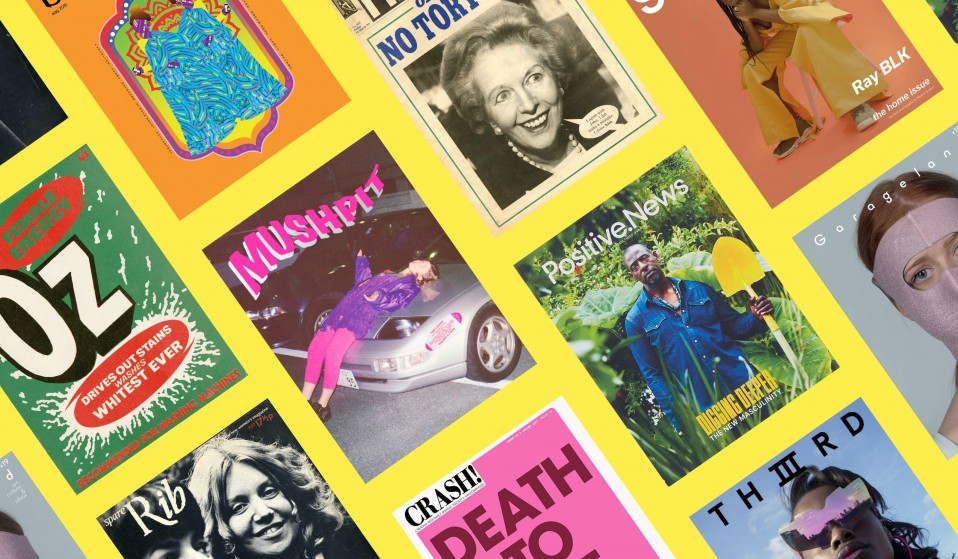 For decades, women have been using independent zines to discuss the issues that matter to them – rejecting the mainstream media’s misogyny to take issues into their own hands. We talk to the most revolutionary publishers about what spurned them on.

For decades, women have been using independent zines to discuss the issues that matter to them – rejecting the mainstream media’s misogyny to take issues into their own hands. We talk to the most revolutionary publishers about what spurned them on.

Female-founded, independent alternative magazines have been disrupting and adding to UK society for decades. In celebration of this, the likes of Spare Rib, gal-dem, Mushpit, Sabat, Fruitlands, ROMP, Riposte, Hotdog, Ladybeard, Burnt Roti, Orlando, and Beauty Papers are all being celebrated in an upcoming show in London – Print! Tearing it Up – alongside other radical publications that have helped push things forward.

It all began with the seminal Spare Rib, a second wave feminist magazine considered so “dangerous” by the establishment that it was banned from many newsstands in the ’70s. Fo co-founder Marsha Rowe, magazines offered a way out of the secretarial career “box” she found herself in during the era as a young woman.

Rowe moved from Australia to London in 1969, where she began working at the UK arm of satirical magazine Oz. After attending the first UK Women’s Liberation Conference in 1970, she organised a meeting of women in the underground, alternative press.

“What we realised was that we did all the service work – the admin, the typing, looking after men at home,” she remembers. “We weren’t all mothers or housewives, but we were all kept in secondary positions. It all splurged out at that meeting.”

Soon after, Rowe founded Spare Rib along with Rosie Boycott. It was a ‘women’s magazine’ – but with stories told from an entirely new angle. “The women’s movement was just beginning to grow,” she says. “We weren’t even seen as part of it at first – we’d come out of the underground press and we were still wearing makeup and platform shoes! – but gradually [Spare Rib] became the voice of the women’s movement on the newsstands.”

“My aim was so much to reach out to women who were not in the women’s movement, and have a dialogue, just how I’d found a way to escape through magazines.” 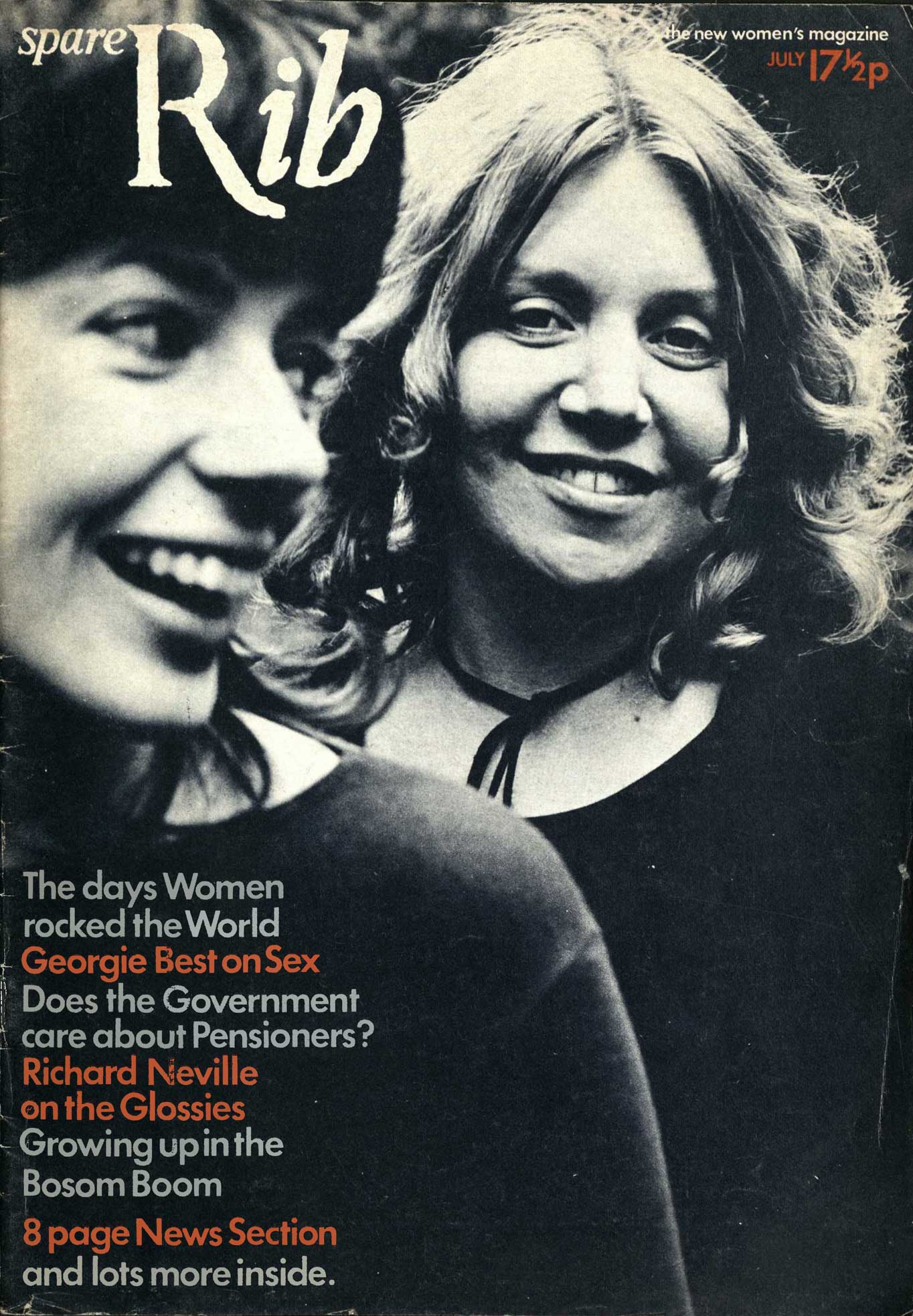 Spare Rib was radical not just in its actual content but its unique, surprising combination of content: usual women’s mag features (fashion, fiction, interviews) alongside hard news – something unheard of at the time. “Everything was from a completely alternative angle,” says Rowe. “Slightly anti-consumerist, ‘do it yourself’, even featuring jeans was seen as rebellious.”

The magazine helped shape the national media, putting subjects like sexuality, work, motherhood, and feminism, intersectionality, racism and violence against women (and the mere fact that women want to read news) into the mainstream conversation, and towards women outside of the academic debate.

“We were in the middle of transforming ourselves while we were doing it, it was really idealistic and hopeful,” Rowe adds. “All the men we knew were threatened – we wanted to talk to ourselves, we weren’t their audience anymore.” 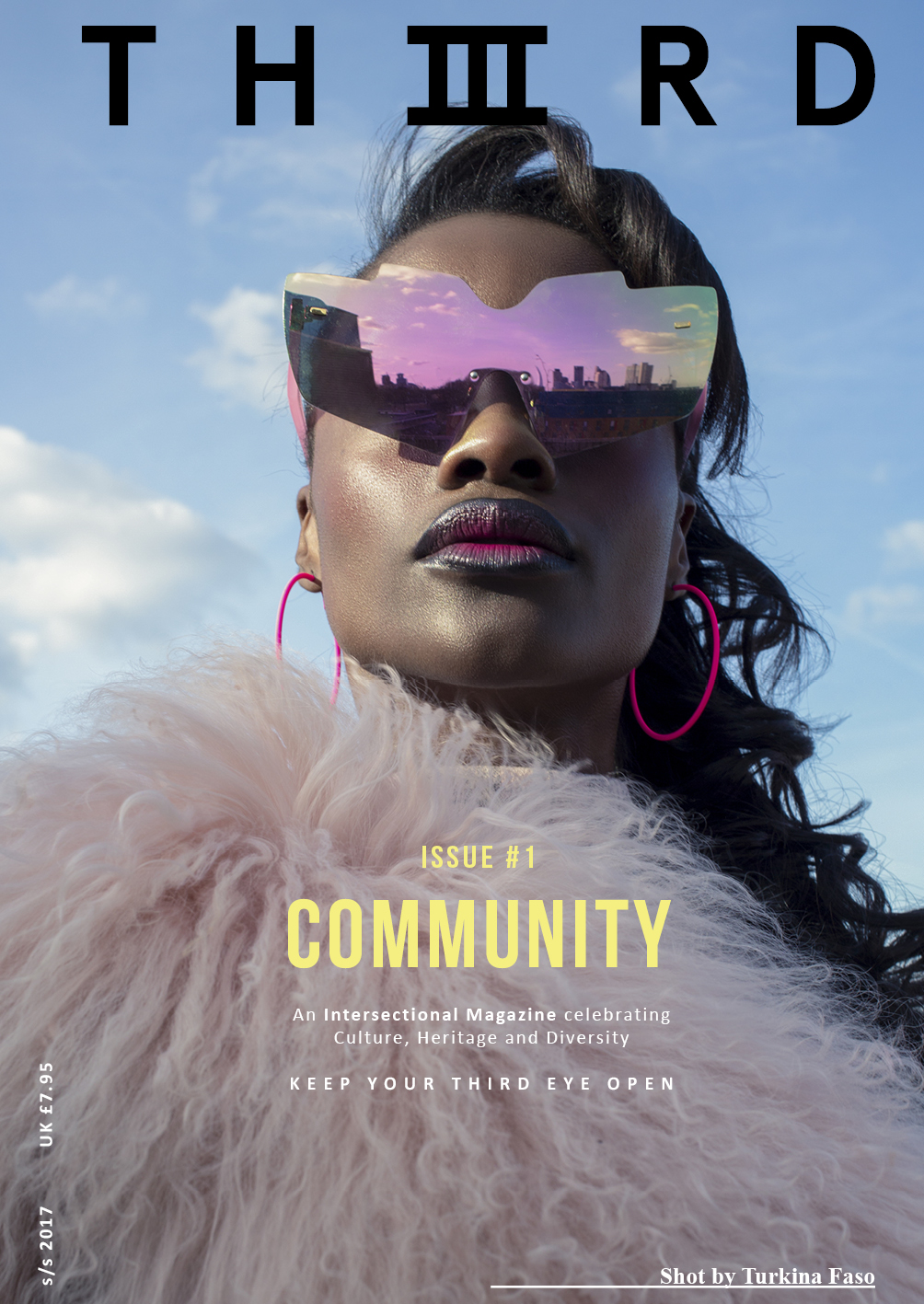 The desire to create this came partly from lack of authentic people telling those stories from a place of first-hand experience.  “That is the spirit of THIIIRD, championing the underdog or those marginalised by the mainstream, celebrating stories missing or not treated in the right way,” says Editor-In-Chief Rhona Ezuma.

Ezuma thinks that THIIIRD is uniquely placed to talk about the topics it covers, in part due to being led by a woman of colour. “I think there’s something about when the underdog has control, publications are run a certain way,” she says. “I’m a woman, but I’m also a black woman, so we can relate to a lot of communities.”

“We’re touching base with the LGBTQ community. We’re not directed purely to women – we’re for non-binary people, and for men as well. I think sometimes being a woman, and a black woman, I’m given access and trust that I might not get otherwise. People feel safe with us and I think that’s quite special.”

Ezuma gives the example of their Femme issue, directed at femininity but without being directed simply at women. She also cites publications like gal-dem and Riposte as connecting to THIIIRD’s ethos.

gal-dem – written by women of colour, for all – definitely shares plenty of THIIIRD’s values, not least in the way it celebrates underrepresented voices. The magazine has gained national attention – its writers appearing on shows like Newsnight, curating and featuring in events at institutions like the V&A and Tate Modern, and featuring in mainstream publications like the Guardian and Vogue – which means its message is gaining a wide audience. 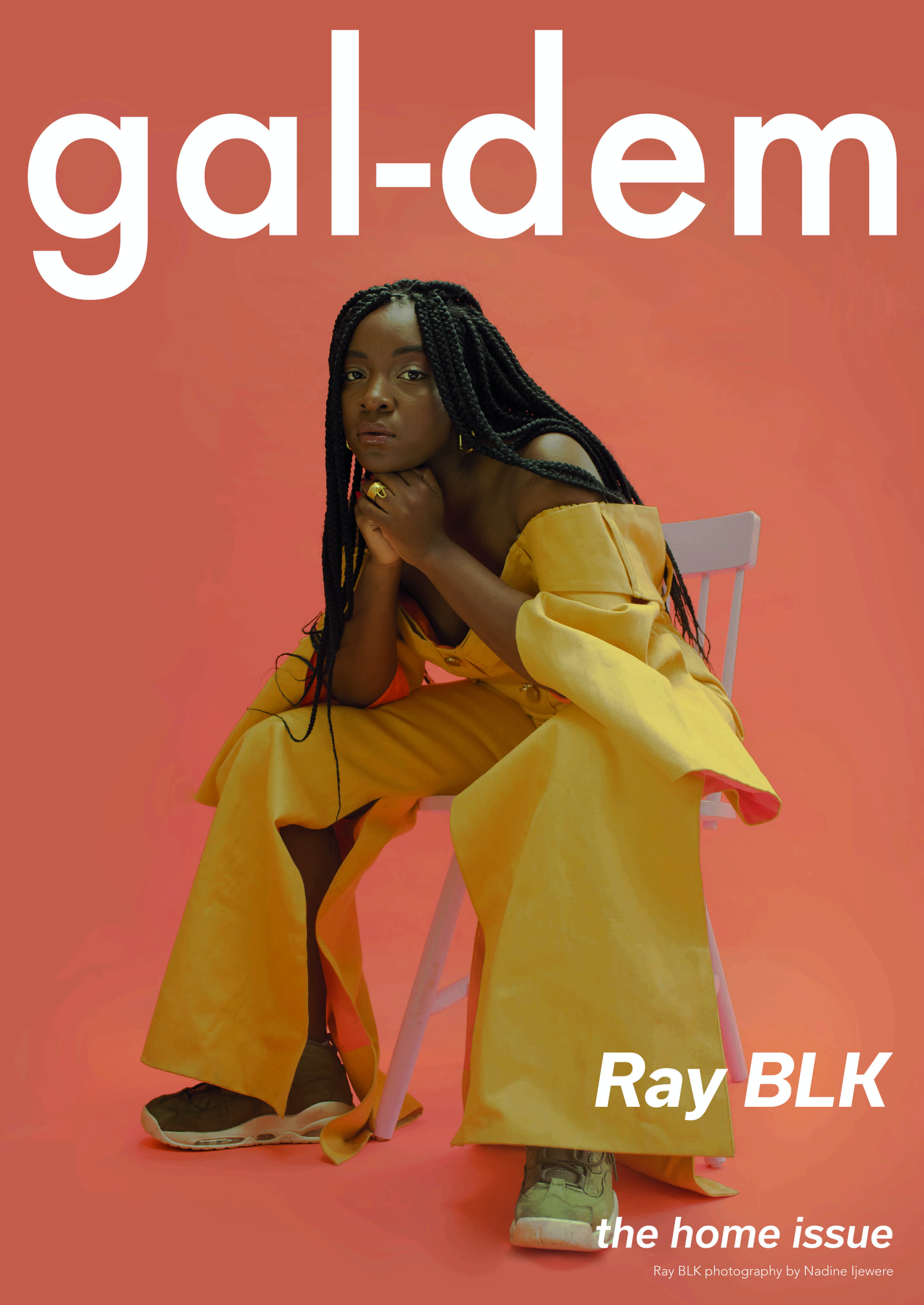 Deputy Editor Charlie Brinkhurst Cuff says: “I now know that there were plenty of feminist zines and publications like Spare Rib which came before us, but while gal-dem‘s creation was obviously influenced by society and culture at large, we didn’t take any specific inspiration when it came to how we presented ourselves as a magazine.”

“We were doing something which felt right and natural as women of colour and non-binary people of colour who hadn’t seen themselves represented in the media. I’m still learning about the history of radical magazines made by women but I do believe that gal-dem will be in the history books one day.”

Burnt Roti is another women-led magazine pushing forward untold stories from an underrepresented community: it is created by South Asians, with a mission to celebrate South Asian talent.

Editor-in-Chief Sharan Dhaliwal founded the magazine after having a nose job a few years ago and conversations following on from that about body hair and the kind of plastic surgery that potentially wipes out a person’s visible ethnicity. “When I started opening up about these aspects of my life, I found people who followed me would reach out to me, thanking me, telling me how desperately they needed to hear it from someone else,” she remembers.

Burnt Roti gives readers a space in which to connect and discuss the issues that are specific to them. “How weird it was we initially disliked our mother’s smelly Indian food and now ask them for the recipe,” Dhaliwal gives as an example. “We connect through stories and our mission now is to connect more in person. We hold more events and after our exhibition [The Beauty of Being British Asian] we noticed how important it is to connect people. We had queues going around the block, lasting for two hours and people didn’t complain. In fact, I heard them say, ‘We’re not leaving, there’s nowhere else for us to go to experience this’.” 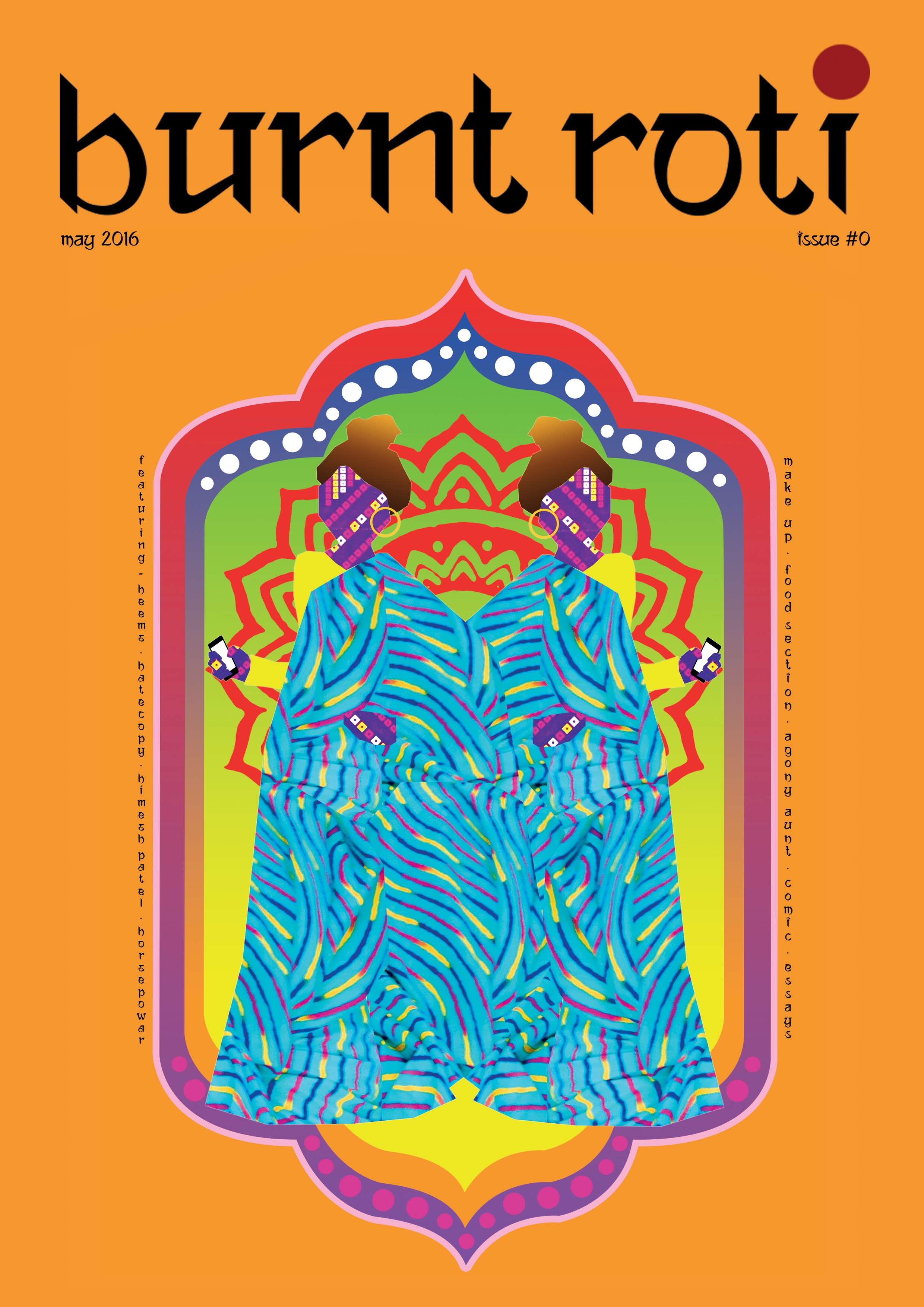 Burnt Roti also reaches out to wider society, and resonates especially with people from other immigrant communities. Dhaliwal (who also works in video production, graphic design and illustration) also feels that it’s important magazines like hers help address the underrepresentation of women – especially women of colour – at the top of creative organisations and careers.

“Female-led organisations can address this with high-level decisions on equality and pay,” she says. “Decision-making is important here, because the male-led industry makes decisions on privileged authority, whereas women tend to be aware and therefore work on problem-solving these areas.”

Another female-led publication filling a void in the magazine world is Ladybeard. The team (made up of seven) speak as a collective rather than one individual, which goes some way to demonstrate its alternative take on issues.

“We started the magazine to challenge the problematic messages peddled by mainstream glossies,” the team says. “We loved the feel and weight of these magazines but hated the way they made us feel. We wanted to create something that was covetable and beautiful but that opens up questions and offers a range of perspectives.”

“We want it to be a place of play rather than a bible that tells you how to live, what to wear, how to look. We take big, over-represented topics like sex and beauty, and open them up to fresh feminist perspectives.” 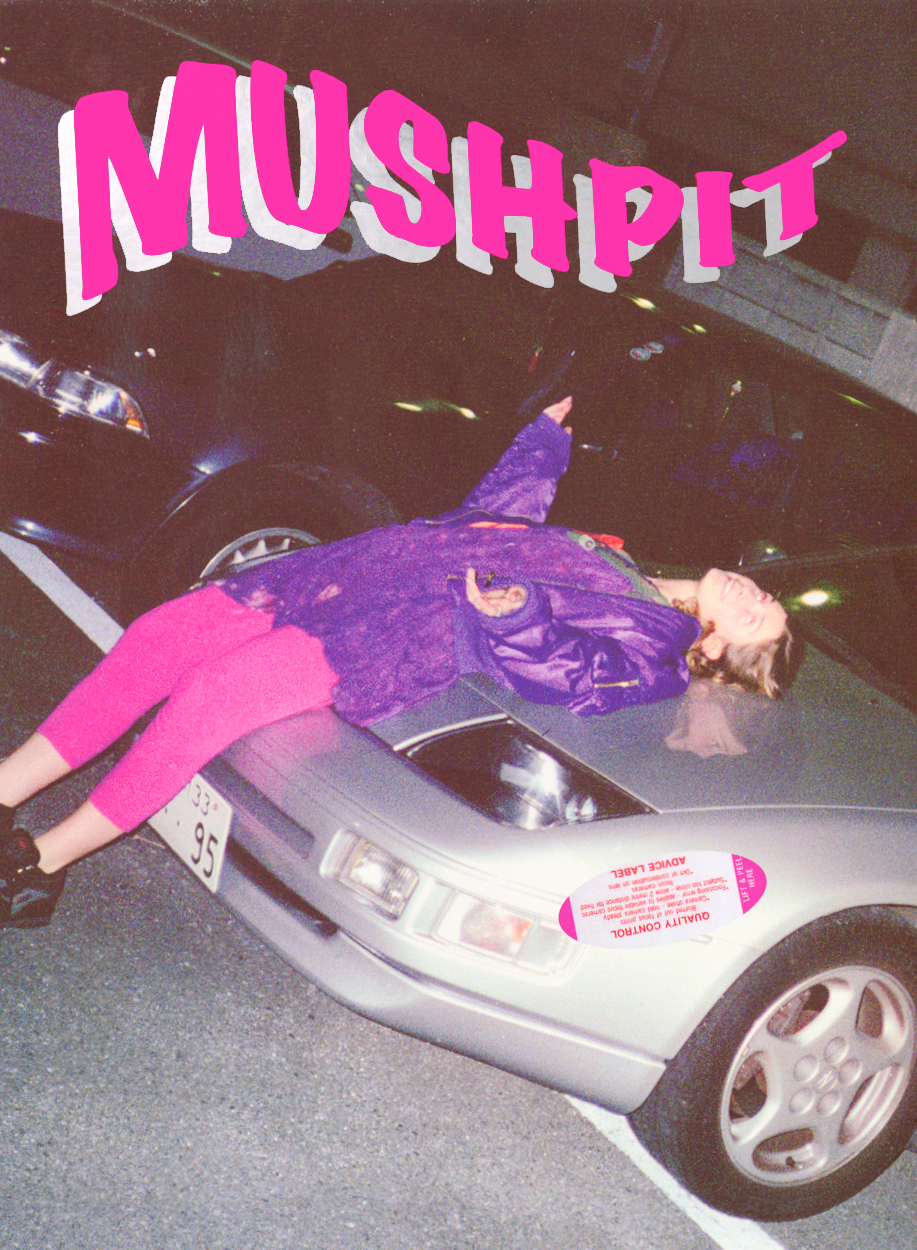 Borne from a similar, more mainstream vein, The Mushpit – with its young, very female voice and striking DIY aesthetic – creates something that had a familiar tone of voice to the founders’ specific community (young women, in London) but also useful.

Bertie Brandes, one of the editors, says: “We grew up reading Mizz and J17 but also loved Private Eye and the Onion. There didn’t seem to be an in-between, to be relevant in the same way that those teen girls magazines had been but also funny, smart and satirical, even political, like those other magazines.”

They consciously positioned their magazine between those two groups, covering topics like advice on attending the local sexual health clinic alongside helping to organise fun beauty sessions for the girls and women of the Grenfell Tower tragedy. “A voice of irreverent femininity. Kind of ‘take no shit’ but also super vulnerable and complex,” says Brandes. “I hope that’s something that comes through.”

The charming naivety of Mushpit’s design echoes the Xeroxed DIY zines of the ’70s-’90s. “We took the tools we had available to us – a cracked InDesign – and put it together in the quickest, most spontaneous way,” adds Brandes. “We had no design training or experience.”

Brandes talks about community – everything Mushpit does is “infused” with the voice of this group, the in-jokes and knowledge and experiences of what it is like to be part of that community – and that’s what shines through each the stories of these radical, women-led magazines. It’s all about community.

Since the days of Spare Rib the fight to push forward the voices of women, women of colour, LGBTQ women and non-binary people, has been fought by those in the independent, radical press. This summer’s show at Somerset House demonstrates how the fight is far from over: in fact, it’s just getting started.

Print! Tearing it Up runs at Somerset House from June 8 to August 22.

Linkedin
RELATED ARTICLES
OTHER ARTICLES
With skyrocketing rents, packed out viewings, bidding wars and more, renting in London has never been harder.
Rhiannon Adam spent three months capturing an ageing society wracked by division, isolation, and the aftermath of scandal.
Ahead of the release of their first collaborative album, the producer and rapper talk psychedelics and the state of UK hip hop.
The idea that a younger generation is abandoning work has become a popular narrative online, but it doesn’t necessarily reflect reality.
Sean Maung’s photos are a love letter to the Black and brown communities that make up New York.
Thousands attended the annual event this year to wheelie through the city and call for ‘knives down, bikes up’.