Issue Archive / For true sneakerheads, every shoe tells a story 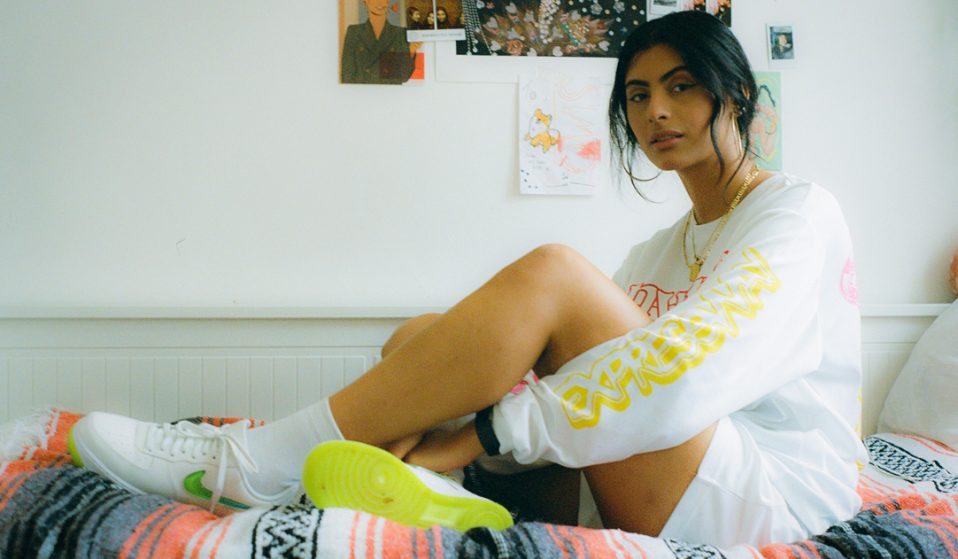 The subculture where trashed trainers are a perfect symbol of excess.

Trashed trainers are a perfect symbol of excess. They tell tales of forgotten parties and reckless raves, each scuff and smear reminding us of times we’ve pushed things too far.

Ever since trainers evolved from being purely functional to a fixture of mainstream fashion, no other item of clothing has played a bigger role in the history of youth culture.

In the mid-1980s, after Nike launched its Air Jordan line and Adidas signed an endorsement deal with Run–DMC (the first of its kind), the art of collecting kicks quickly became a subculture of its own.

There would be legendary rarities and deadstock, custom alterations and secret cleaning techniques, shrewd swaps and out-of-control auctions.

It’s an addiction that has spread through all classes and ethnicities, signifying meaning in everything from social status to gender politics.

But true sneakerheads don’t believe in keeping their stash stored away in immaculate condition. They’re to be worn and lived in, accompanying the ups and downs, only kept for as long as they matter. 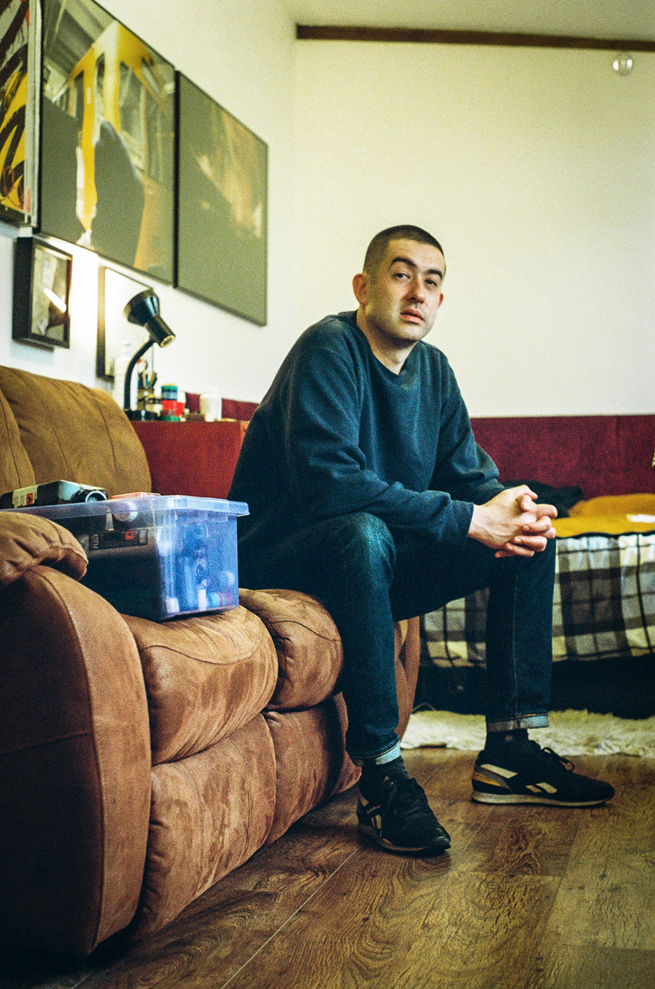 Andy Gillman is drawn to a particular type of destruction. He explores abandoned spaces – empty buildings and housing estates, old stadiums and power stations – with a camera in hand. The 36-year-old has been doing some variation of this since he took up graffiti as a teenager: tagging everything from streets and buses to track sides and trains. First it was all across London, then around the country, then Europe. And while he never set out to collect them, trainers became a consistent fixture along the way. (Andy has owned as many as 15 pairs at one time.)

Every year, Andy sticks to two or three pairs for day-to-day wear, which he tries to keep fairly clean. Then there’ll be two pairs that he uses for work: “older but still good trainers that got ruined by paint and demoted to second-class.” And once they’ve had a good life, he might throw them over a telephone wire or a tree branch – like the “trainer tree” he once cultivated near his mum’s house, which he’d watch weather through the seasons as he passed by on the bus. 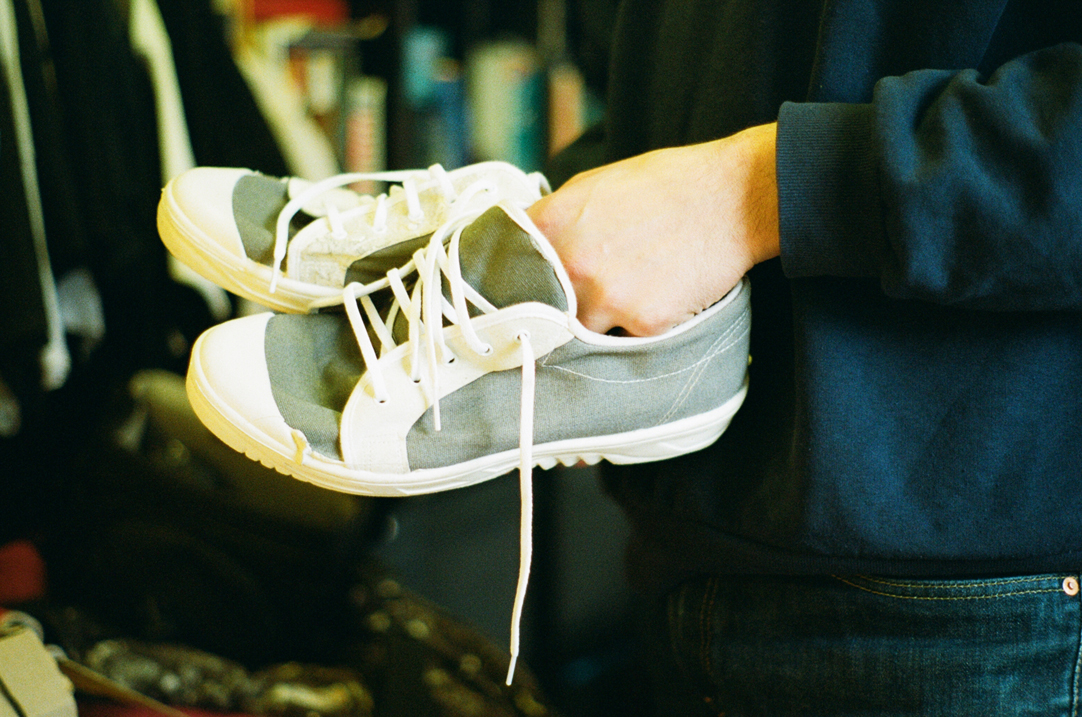 But Andy’s most sentimental pair of shoes are his prison-issue gym trainers – made out of green canvas and a roughly moulded rubber sole – created by and for inmates across the UK. He acquired them back in 2008 while serving a two-year sentence for conspiracy to commit criminal damage. Appreciating the trainers’ rarity, he smuggled them out through a friend – and even considered putting together an exhibition from all the other objects he managed to hang on to.

“That fascinated me,” he says. “The fact that these things aren’t available on the outside, and that you can’t leave with them in your possession, means they become extremely valuable even though they’re really worth nothing.” 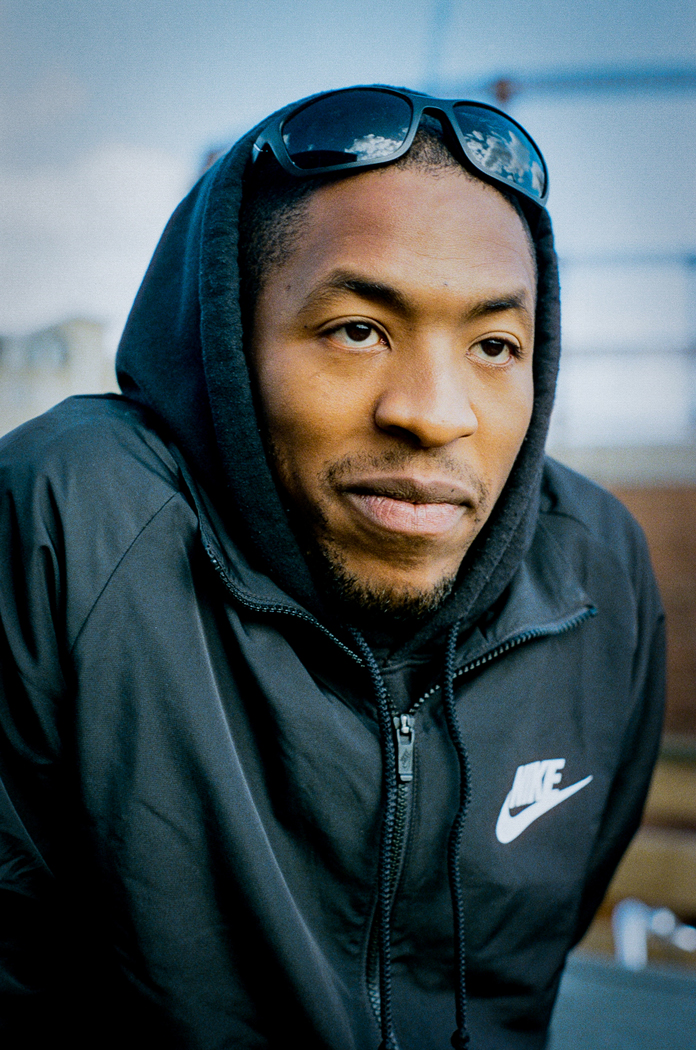 James Massiah reckons he’s probably owned around 20 different pairs of trainers at one given time – a habit he most definitely didn’t pick up from his mum. “She likes ‘nice things’ but I guess she sees the beauty in their comfort and practicality over much else,” says the 28-year-old. “I’d come home in £500 trainers or show her pairs that I’d been gifted, and she’d say, ‘Where’s the rest of it?’ Or, ‘You could put a deposit on a house with those!’”

James started writing poems about his faith at the age of 12, often reading them out in church. By the time he turned 18, however, a more cynical worldview started permeating his work. The church didn’t approve, dubbing him ‘a false prophet’ and banning the poet from reading at any church in London.

Instead he began sharing them at university events and spoken-word nights, gaining a following for his refreshing candour on themes like sex, class and death. Today the poet’s work has managed to crack mainstream consciousness – to the point that he was commissioned to write a poem for the Prince of Wales’ 70th birthday. 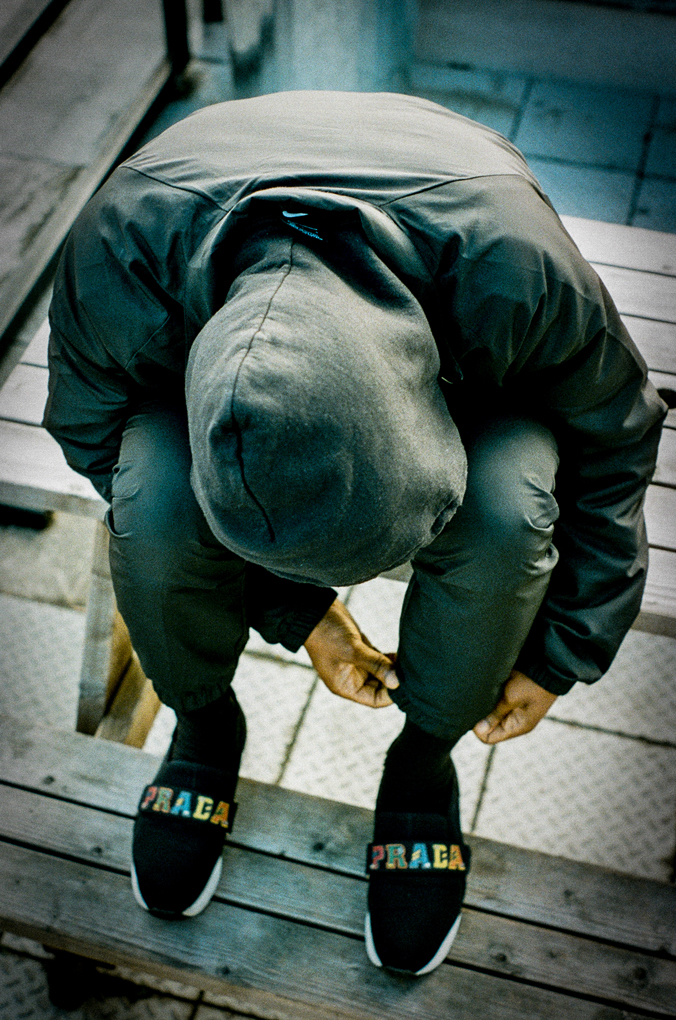 Style, however, has been an important part of his identity for as long as he can remember. A great deal of it stems from aspiration: a desire to own a stake in the kind of high-end lifestyle that luxury brands are selling, even if it doesn’t necessarily reflect your reality at the time.

By that logic, you would think he’d treat them with utmost care. Instead the south Londoner believes in living in the moment, however messy that might get. “At a party, in the smoking area: drunk, tired, fucked. Uber to leave is arriving. Where do you stub your cigarette? On the toe-box of your trainer. Obviously!” 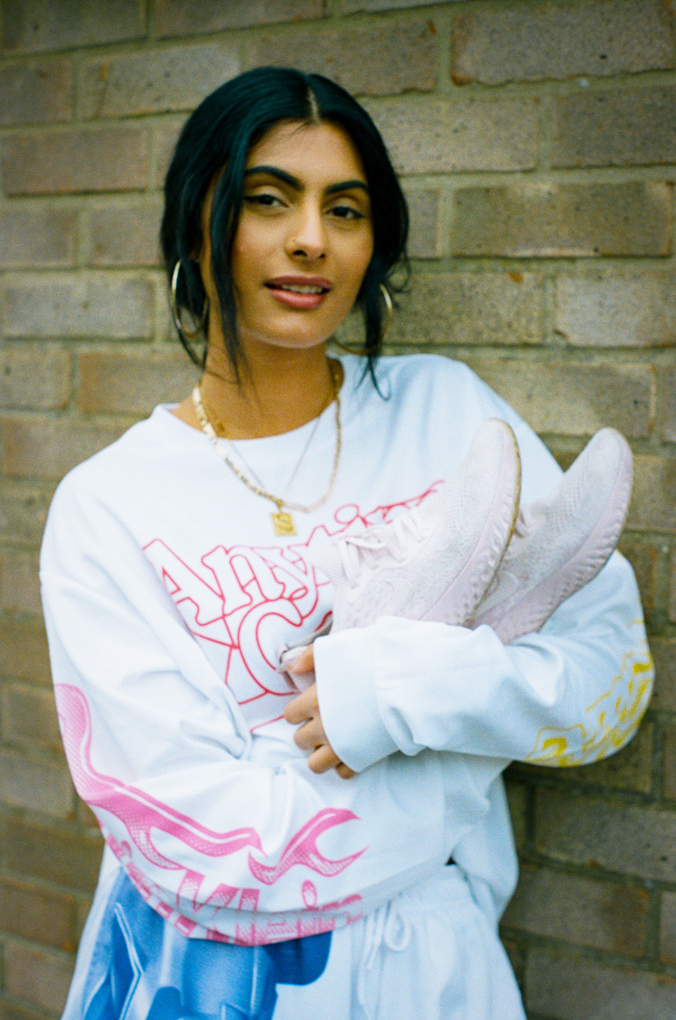 Simran grew up between London and Johor Bahru in Malaysia, her eclectic style informed by Punjabi culture as much as the early ’90s British-Asian rave scene that her dad and uncle were part of. “That’s where my introduction to streetwear began,” says the 24-year-old.

“A lot of my memories of my uncle are him wearing suave tracksuits, polo necks and gelled-down hair. He’d pretend he was going somewhere else, leaving in really smart clothes. But I’d always notice what was actually in his backpack: his raving trainers and tracksuit!”

The first pair of her own were fake Nike Airmax 95s, in black and pink, bought at Wembley Market. (All of her dad’s trainers were 95s, but in different colours.) 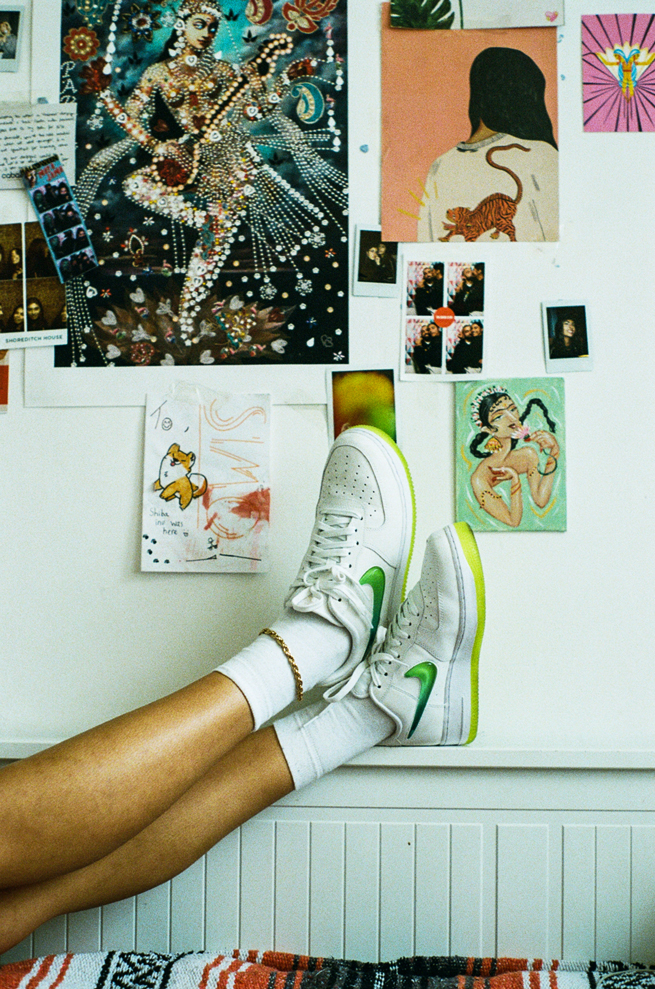 Later, while studying sociology at Bristol University, Simran began thinking about ways she could put her own stamp on fashion: speaking out about representation, urging others to re-embrace their heritage, and helping to develop a recyclable trainer that doesn’t use glue.

“Lately I’ve been trying to manage my trainer collection in a more sustainable way,” she says. “I’ve got a rotation of day-to-day ones, then my rare ones.

“Anything in between goes to charity. Last year I donated 20 pairs! But I also feel like looking through the history and progression of my shoes shows who I am and where I have come.” 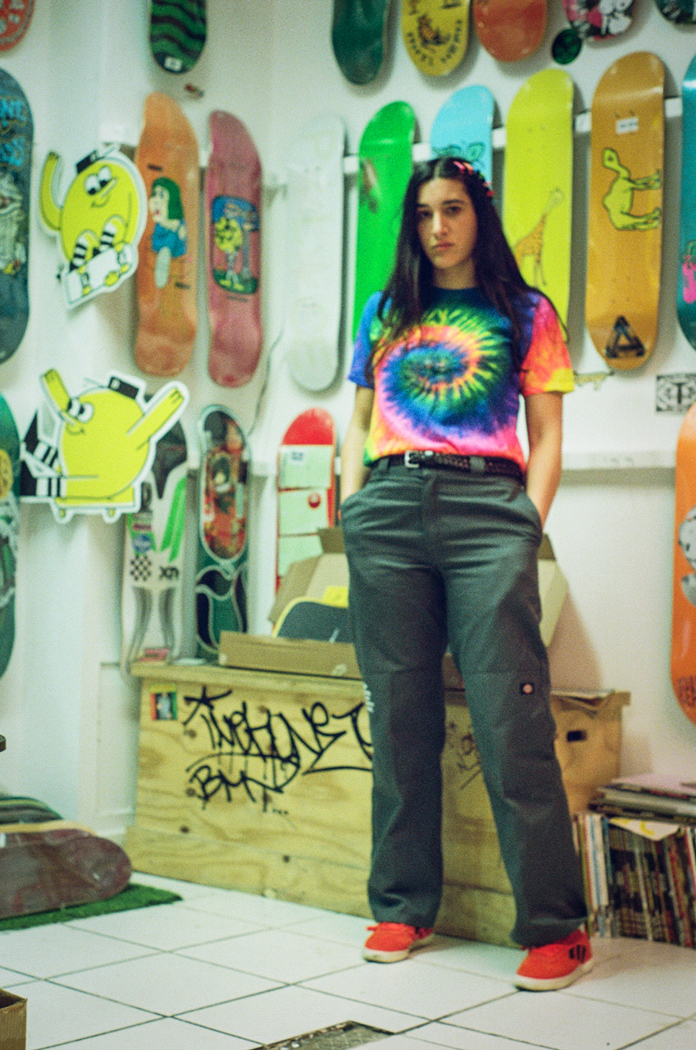 Born and raised in Athens, Daphne Greca didn’t begin skating until her early 20s, after she’d moved to London to study photography. Making up for lost time, she trained relentlessly – and her trainers took the brunt.

“One time I was trying to do the same trick for three days,” she says. “I didn’t do anything else until I could master it. That was one way to ruin a pair of shoes quickly.”

In 2015, Daphne co-founded Brixton’s Baddest: a south London skate shop with community at its core. Over the past few years, they’ve established themselves as a go-to spot for skaters in London – largely down to their belief in supporting local talent and their efforts to protect the area from the threat of gentrification. 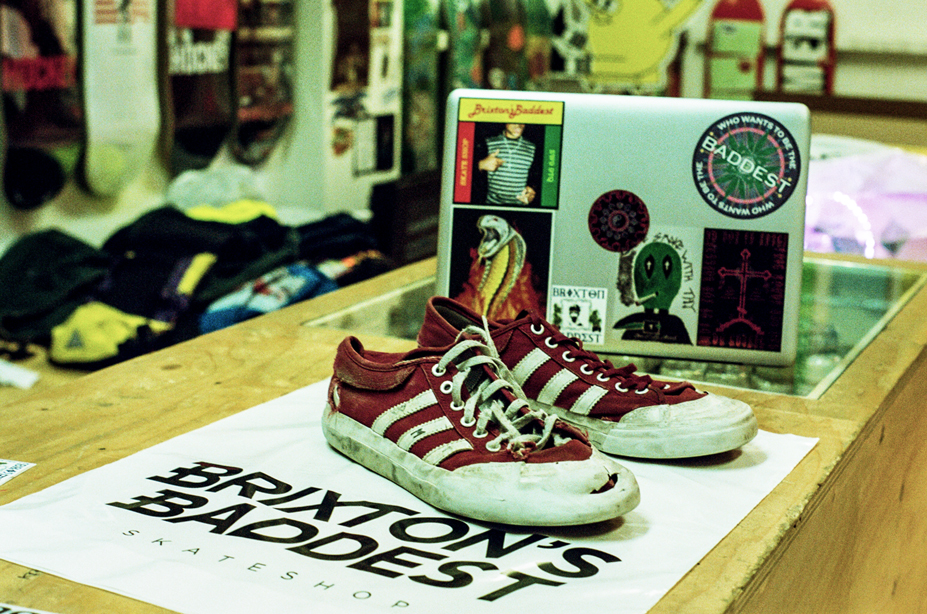 Over time, she’s noticed that her skate shoes often get ruined in exactly the same places – tearing through at least eight pairs a year. But she holds off from buying new ones as much as possible, believing that the high prices don’t represent their longevity or usefulness. And besides, she’s always had an appreciation of the worn-out look.

“When I was around 13, I used to think that old-looking shoes were cool. I kept my first pair of trainers for so long that my parents had to frame them as a surprise gift… so while I don’t wear them any more, I still get to keep them.”

This article appears in Huck: The Hedonism Issue. Get a copy in the Huck shop or subscribe to make sure you never miss another issue.

Linkedin
RELATED ARTICLES
OTHER ARTICLES
A group of young Palestinians have found temporary freedom in the act of parkour, reimagining wreckage and ruins as a series of high-octane playgrounds.
The two-day long event returned to London this year, showcasing a spectacular parade, steel bands and Caribbean food.
A 37-year-old woman shares how her abortion led her to become a clinic worker, and the abuse she’s received in that role.
For over a decade, gamblers have won big by employing people to place live bets from the court. But does this dubious method still work?
By turning a real-life crisis into daytime television fodder, TV bosses have once again shown themselves to be completely out of touch with audiences.
Rhiannon Adam spent three months capturing an ageing society wracked by division, isolation, and the aftermath of scandal.