Art & Culture / The Met Police is corrupt, violent and rotten to its core 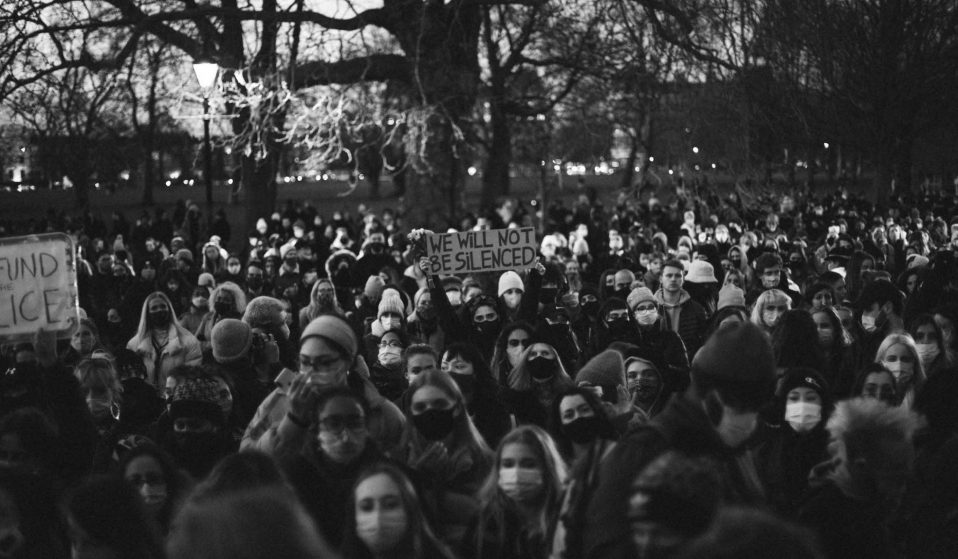 This IWD, Sisters Uncut are calling on people to imagine a future without police.

This International Women’s Day, Sisters Uncut are calling on people to imagine a future without police, and one that centres survivors.

This time last year, Sarah Everard was murdered at the hands of a serving Metropolitan Police officer. Wayne Couzens used his powers and the often confusing but heavily-enforced Covid law to kidnap, rape, and murder Sarah as unaware bystanders looked on. Sarah’s brutal murder was a catalytic moment for many; a blatant example of the violence police are empowered to enact.

This violence was on full display at the vigil in Clapham where women and non-binary people who’d peacefully gathered to mourn were brutally manhandled, using the exact same blurry Covid legislation used by Wayne Couzens to kidnap Sarah. The violence witnessed at Clapham Common was so severe, even the Met themselves were forced to acknowledge it.

Instead of these terrible crimes and abuses of power leading to accountability, they became the opening of the floodgates for a seemingly never-ending list of state and sexual violence. Just this year, we learnt of a Met police officer facing 29 allegations including 13 counts of rape (to which he has entered not guilty pleas). Every week, one woman comes forward to say their partner in the police force is abusing her or their children. More than 750 Met police employees have faced sexual misconduct allegations since 2010. At the time, the ring-wing press and the Met tried to paint Wayne Cozens, Sarah’s murderer, as a bad apple. But in reality, this is about an institution that is corrupt, violent, and rotten to its core.

I’m a member of Sisters Uncut, a feminist and abolitionist direct action group with a reputation for large scale disruption and dissent. We’re committed to organising direct action because I believe that we all deserve to move through the world without fear of state and gendered violence. We believe that the police are perpetrators – and with that in mind, how can we as women and non-binary people be expected to rely on them when we are unsafe? Between 2012 to 2018, there were 1,500 accusations of sexual misconduct (including sexual harassment, exploitation of crime victims and child abuse) resulting in only 197 officers being sacked.

The police are a boys club of officers drunk on power; their desire to keep themselves unaccountable far outweighs any interest in keeping our communities safe. Between 2015 to 2017, 415 referrals were made for officers that had abused their position to sexually assault someone, with domestic and sexual violence victims, sex workers and drug users being most at risk of being abused by an on-duty police officer. Again, this goes to show that the police are aware of their powers and actively target those that are the most vulnerable.

Sarah’s vigil came at a time when the government was trying to pass the Police Crime Sentencing and Courts Bill, and it catalysed the Kill The Bill movement. The police already abuse the powers they have. Giving them more powers will only lead to more violence and less accountability.

So what are the other options? The truth is, it can’t get any worse than it is now. We live in a time when rape is effectively decriminalised, with 99 per cent of rapes reported to police in England and Wales resulting in no legal proceedings against alleged attackers. We live in a ‘pro arrest’ environment which sees victims of domestic violence being arrested, punished or fined alongside perpetrators. Imagining a future without police can feel like a big task, and it will take nothing short of radical change to create a future that centres survivors.

This might mean redirecting funding to localised and specialised services, or joining your local CopWatch – a movement reignited by Sisters Uncut last summer which saw active patrols spring up across the UK. A CopWatch patrol is a group of people who commit to intervening with stop and searches, surveilling police, and moving towards holding police accountable for their violence. It could mean bystander intervention, knowing your rights and being empowered to get involved when you see police harassing people in your community.

Sisters Uncut was formed by domestic violence survivors and sector workers in 2014, and during that time of austerity we have seen and felt the very real repercussions of redirecting funding from local community based services into the heavy-hand of the state. We want to see a world where the police are defunded, and funding is poured into refuges and specialist services, rather than a violent criminal justice system.

Policing by consent means that the power of the police to fulfil their duties is dependent on public approval of their existence. To beat the bill we must make it unenforceable. This means a commitment to large scale dissent, direct action, noisy protest, acts of solidarity. It means picket lines, unions, collectivity, tactical organising and hitting the state where it hurts. It means every one of us must make a commitment to revolutionary action.

On 12 March at 5pm, we will be gathering at New Scotland Yard for the public to withdraw their consent from British policing. We were never under the illusion that the bill would be beaten in parliament, it will be beaten in the streets. It will be beaten if we become ungovernable. We are Sisters Uncut, and we are powerful and dangerous.

Linkedin
RELATED ARTICLES
OTHER ARTICLES
A group of aid workers face prison for helping to save people fleeing their homes at sea. If they are charged, it will have a chilling effect on humanitarian efforts.
Yohon Tatum, aka Legendary Father of the House of Tisci, reflects on nurturing a new generation of talent.
Campaigners reflect on what the supreme court’s decision to allow buffer zones in NI means for the future of reproductive rights in the UK.
The first-generation graffiti artist reflects on the tagging’s emergence as an art form and the players who pushed the medium forward.
Activists and campaigners are fighting back against new laws that would seriously undermine the ability to take industrial action, calling it an attack on fundamental workers' rights.
Jeffrey Henson Scales intimate portraits and protest images of the BPP and its leaders offer a rare insight into organisation at a time of societal upheaval.