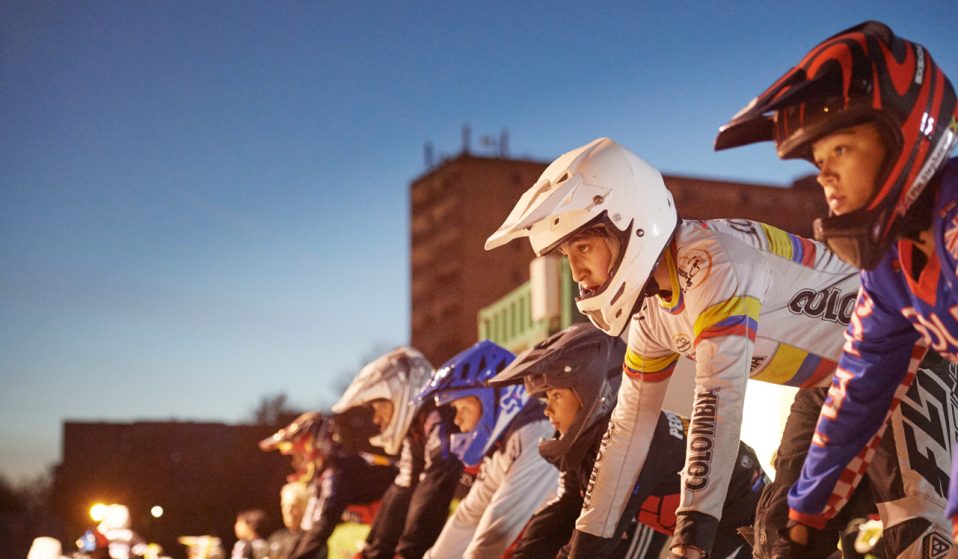 After starting out with just an abandoned track to call home, a penniless BMX club in South London went from being laughed at by rivals to producing some of the world’s best riders.

After starting out with just an abandoned track to call home, a penniless BMX club in South London went from being laughed at by rivals to producing some of the world’s best riders. But they’re not ready to give up a reputation as scrappy underdogs just yet.

On a brisk, breezy evening in South London, eight BMX riders are balanced on their bikes, gazing out over the track they’re about to race. Waiting at the top of the starting hill, their front wheels are held firmly in place by a raised metal gate.

To their right, a start light hesitates on red; behind them, swarms of fellow riders wait impatiently, wishing those at the front of the queue would just start already.

Suddenly an automated voice – robotic, but with an American accent – announces itself from an unseen speaker: “Riders ready, watch the gate…” The line of eight don’t move, or even blink. They know the drill by now. “… Go!” The light turns green, the gate drops, they pedal like hell. 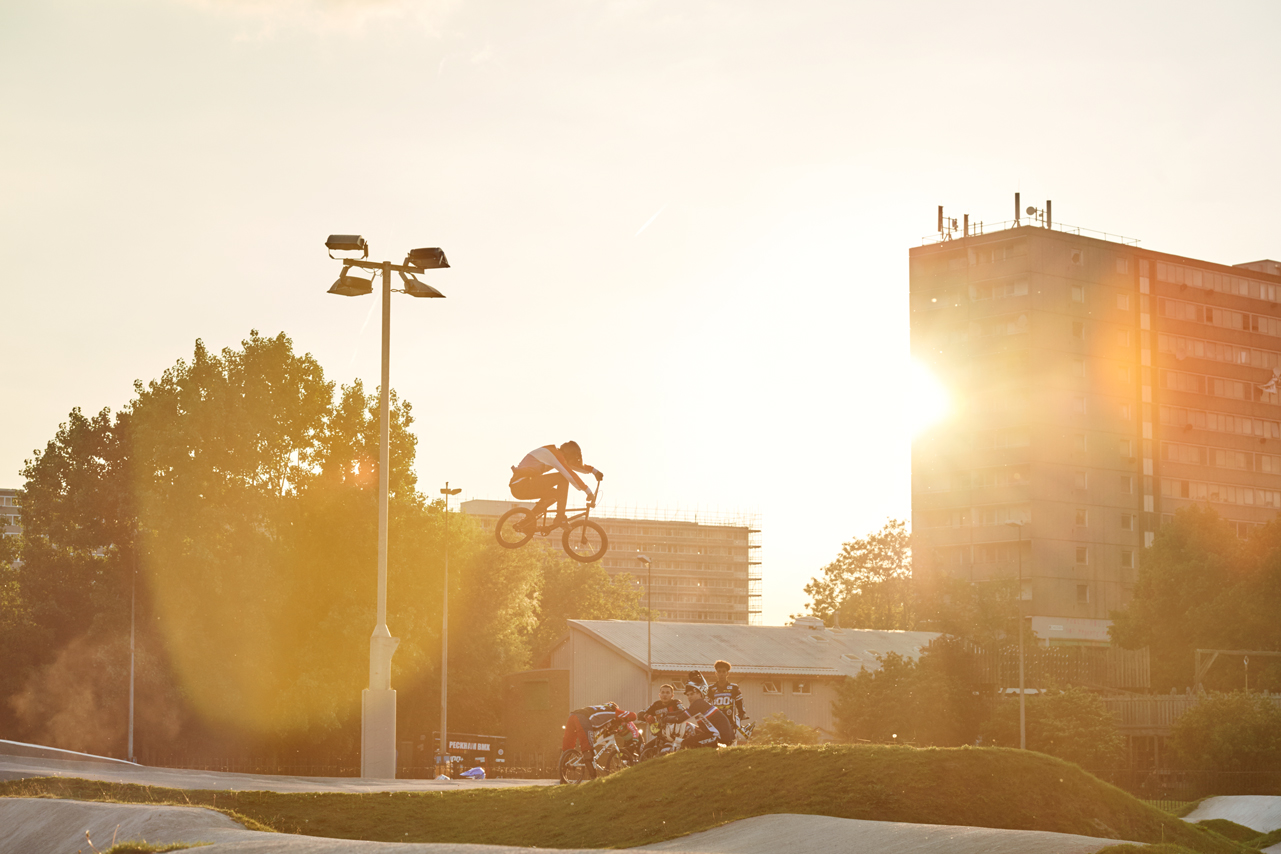 As they hurtle into the first corner – a harsh, looping angle – the next eight take their position at the starting gate, fixing their bikes in place. A group of parents watch on, cheering from the sidelines, while kids in the surrounding park peer through gaps in the fence.

“This is your chance to show me what you got!” yells Michael ‘CK Flash’ Pusey, the head coach and founder of Peckham BMX Club. Back in 2004, CK was the host of a respected radio show on London’s Choice FM. Though he’d been a talented rider in his youth, he’d long given up competing, choosing instead to pursue a career in music. 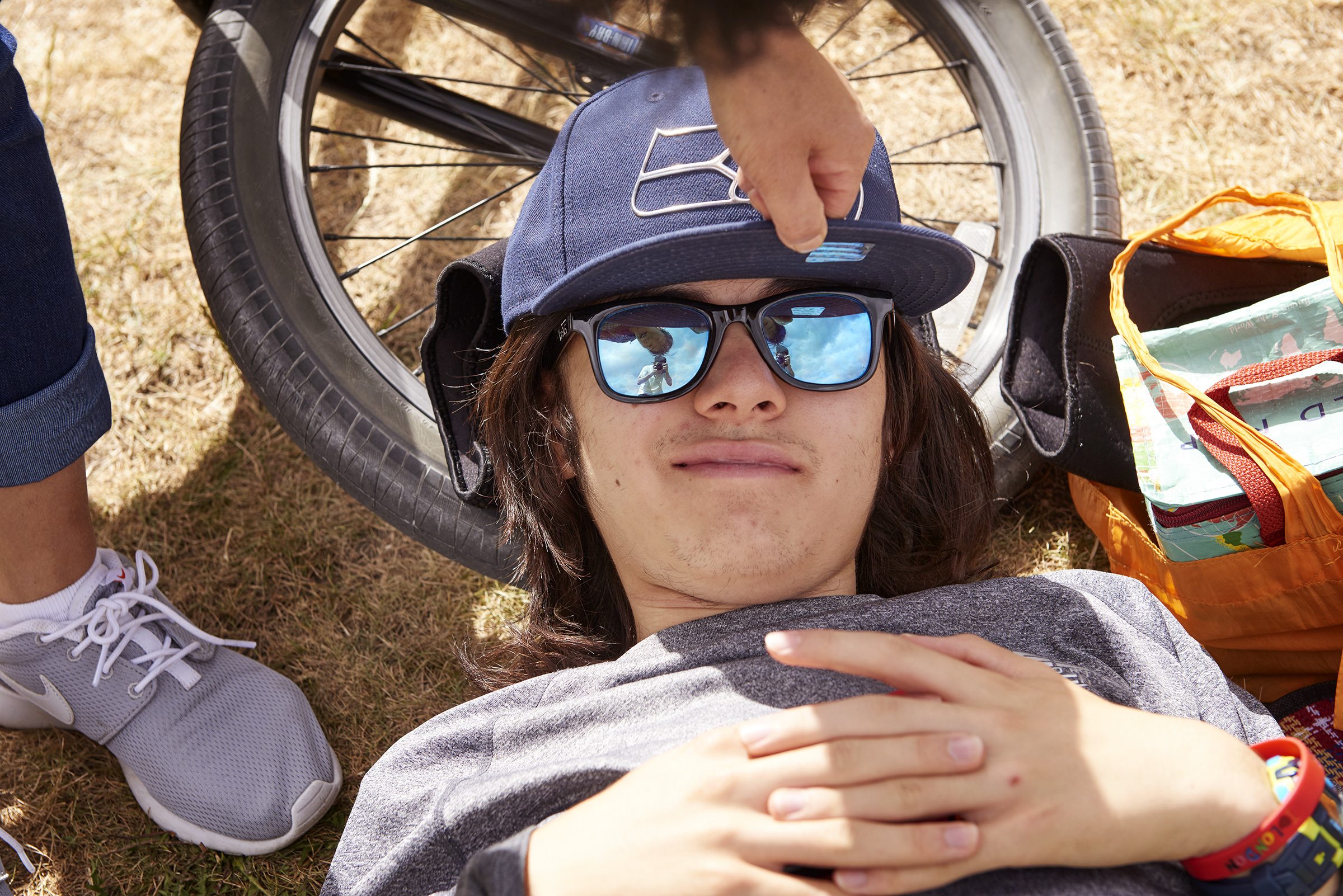 “I thought, ‘Maybe I need to move onto something that’s gonna pay some money, buy some houses,’” says CK, dressed in an all-green tracksuit and exerting the kind of natural charisma you’d expect from a broadcaster. “My brother was a DJ, so I was like, ‘Alright… let’s step into that.’”

His reputation as a rider wasn’t exactly a secret, though. So when a group of friends asked him to help coach at a club they’d just launched in Brixton, he couldn’t say no.

After quickly establishing his mates’ club as a force in local competitions, Southwark Council invited him to host an event at an old, burned-out track for young people in neighbouring Peckham. Once again, he obliged, and the day proved a resounding success – giving rise to a new club of his own. 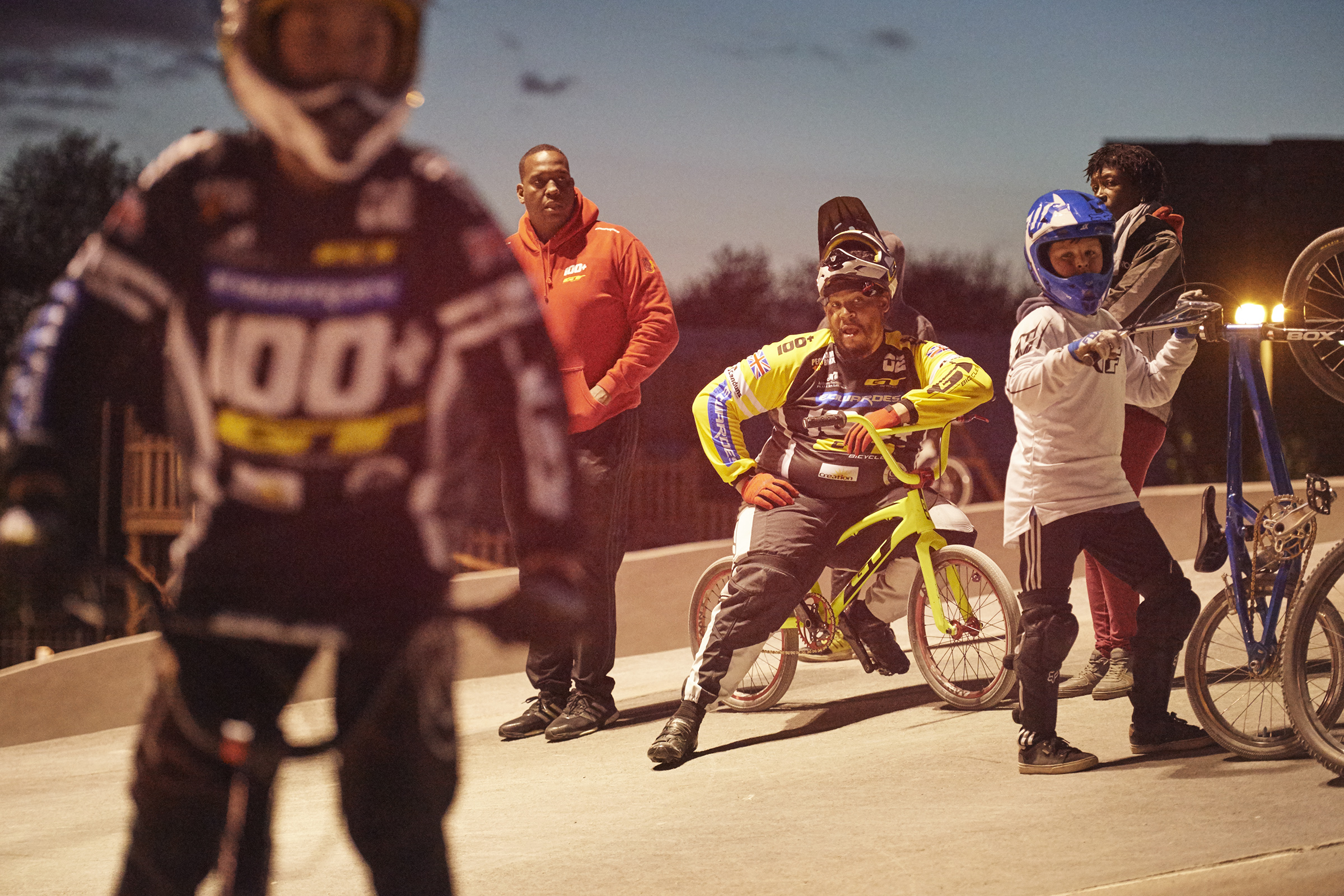 Almost 15 years later, Peckham BMX has developed into one of the best in the country. It now boasts over 200 members – with riders ranging in age from four to 50 – including some of the most distinguished young talent in British cycling.

But it’s been one hell of a journey to get here. Having started with just four kids and a barren dirt track known as ‘the Bird in Bush’, this club has had to fight for everything they’ve got.

The “old days” saw CK (and whoever he could rope into helping him) having to dig out floods at the track on a daily basis. They once even built a table-top ramp using a discarded fridge someone found nearby. 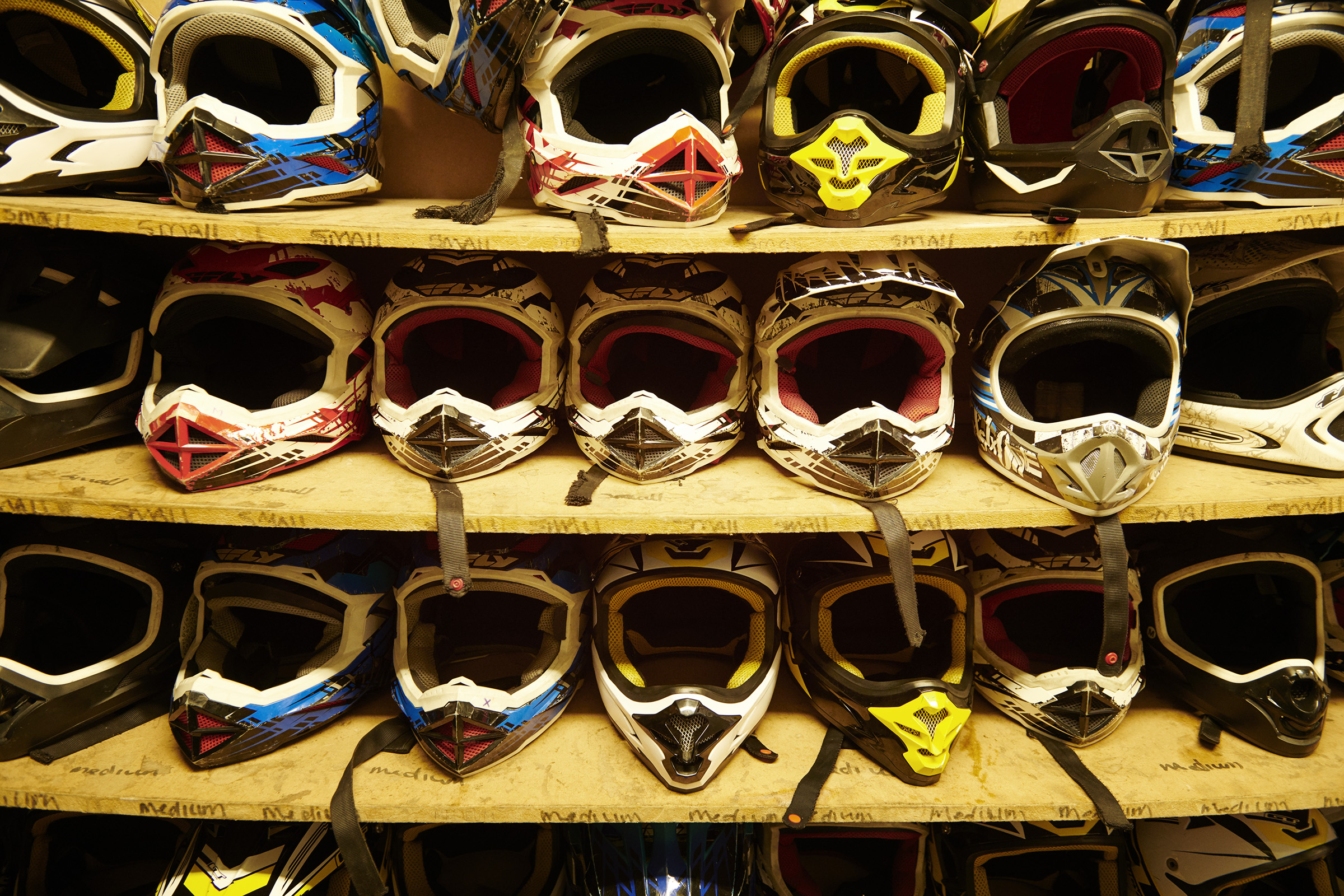 So when Peckham began to compete in local and regional competitions, they were met with derision from other clubs. Without the proper kits, or the proper bikes, they couldn’t help but stick out.

“I’ll never forget people laughing at us, laughing at my sons because of the bikes we had,” recalls Nigel Whyte, Peckham’s assistant coach and CK’s right-hand man.

Nigel, known for his animated training sessions and infectious giggle, came on board when his sons began attending the club early on. Without any experience in BMX (he works as a bulk driver), Nigel quickly took a more active role in its day-to-day running. 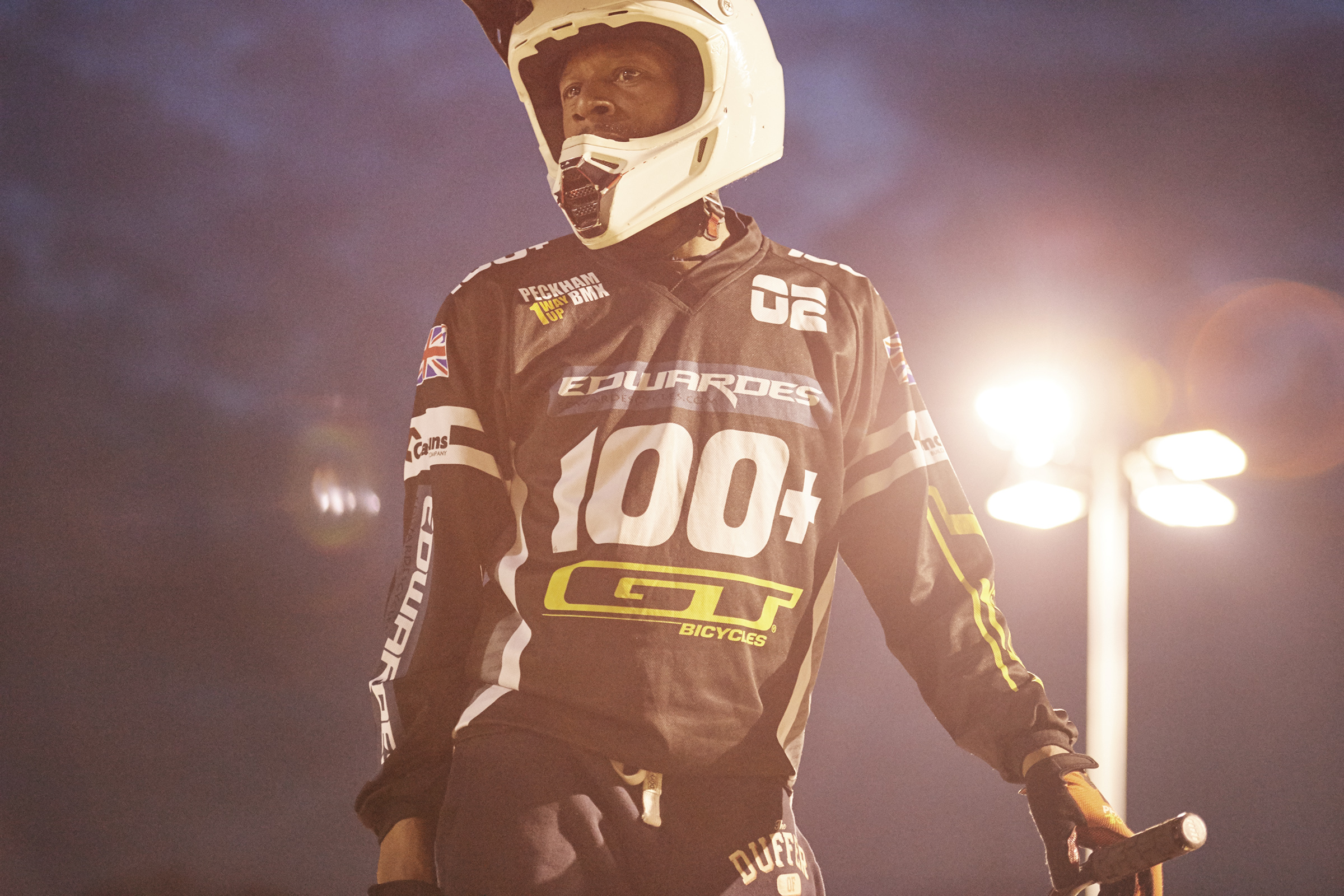 “We got laughed at, but we stuck with it,” he says, dressed all in black, a pair of white earphones dangling from his upturned collar. “We loved racing and there was only one way up.”

As the club began to develop, its ambitions quickly outgrew the Bird in Bush. So CK began to lobby the local council at meetings and surgeries, often waiting for hours to speak in a slot that lasted a matter of minutes. Meanwhile, as Peckham’s riders began to win titles, the need for a proper home only intensified.

“I was basically going to every meeting I could and saying, ‘Look, how do we get a track going?’” says CK. “They’d go, ‘What would you need a track for?’ And I was like, ‘We’re southern champions, regional champions…’ I just kept at it.” 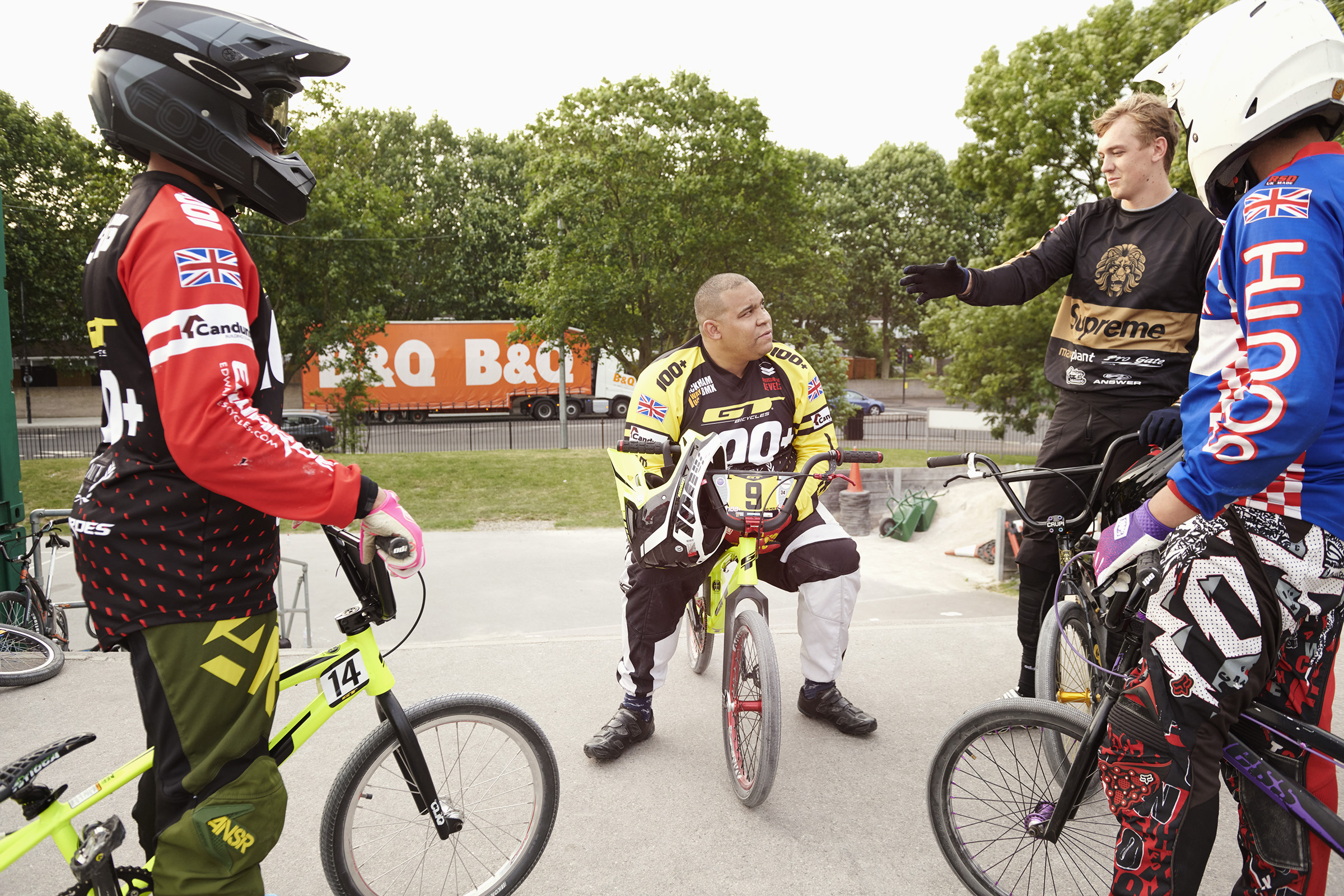 Big Mike shares a moment with his fellow riders.

When the regional titles became national ones, however, support for Peckham started to swell. “The council was getting a bollocking at their own meetings,” he says with a laugh.

“Other people were like, ‘Wait, you wanna give all this money to fix up the shops, but you’ve got this guy here who’s got kids off the street and now they’re becoming national champions and going off to the Olympics!’”

The campaigning stretched on for almost eight years, but in 2013 Peckham BMX eventually moved into their new home: a £1.2m track in Burgess Park, South London, built specifically for them. From that moment, there was no limit to where they could go. 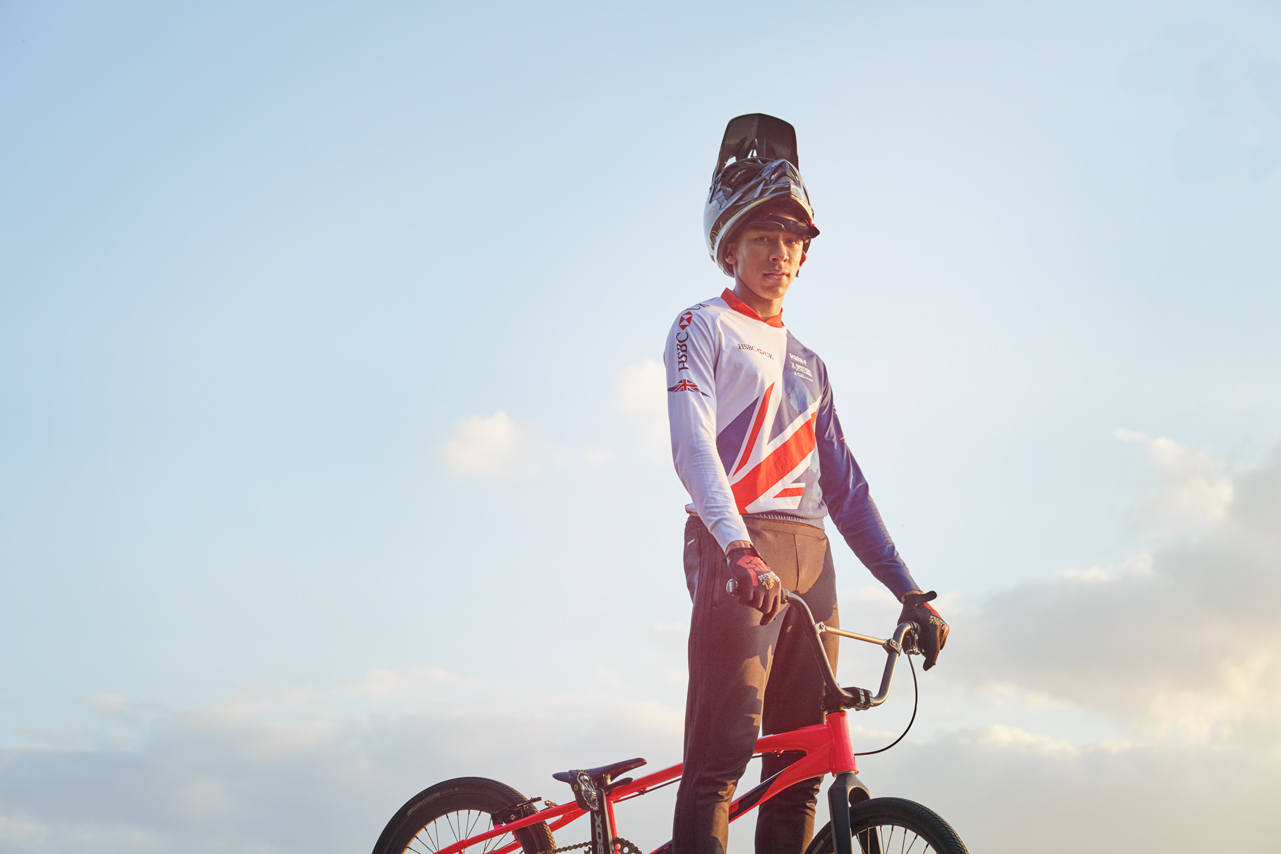 Kye Whyte, 18, was already a British champion by the time he was six. He now trains full-time with Team GB – and won silver at this month’s European Championships.

For 18-year-old Kye Whyte (Nigel’s son), a nine-time British and six-time national champion, that feeling is still fresh in his memory. “When the new place opened, we just wanted to ride 24/7. We’d rode good tracks, but our home track had never been good. Now it’s one of the best national tracks in England.”

Though relaxed and softly spoken, there’s a quiet confidence about Kye that hints at his prowess on the bike. Having started riding when he was just four years old – “It feels like I was born cycling” – he was already a British champion by the time he was six.

Dressed in a grey coat and black jeans, he’s popped down on an off-day from Manchester, where he trains full-time as part of Team GB.

As the youngest of the Whyte Dynasty (eldest brother Daniel was a European champ, while middle brother Tre is also a member of Team GB), expectations remain high but he’s more than managing. 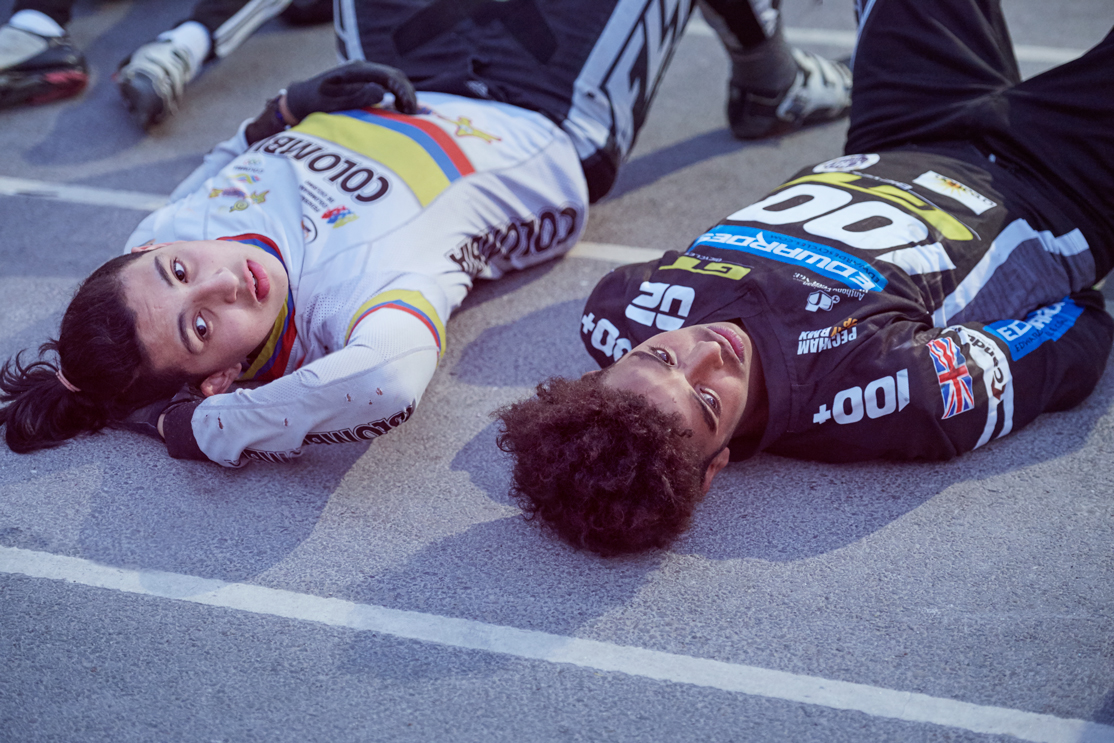 “The club doesn’t teach you how to ride bikes,” he says. “It teaches you to have manners. Parents will come and drop their kids off and say, ‘Yeah, he’s a bit of a naughty one.’ When they go home, they’re not naughty anymore.”

If it wasn’t for CK, Kye adds, he definitely wouldn’t be where he is now. It’s a sentiment shared across the club – from riders to parents – and something its founder takes seriously.

Back in his radio days, CK earned a reputation for championing young British talent at a time when many of his contemporaries were reluctant to put in the hours. The 44-year-old was among the first to lend his support to Grime artists such as Wiley and Dizzee Rascal, as well as playing a major role in the breakout of UK garage act So Solid Crew. 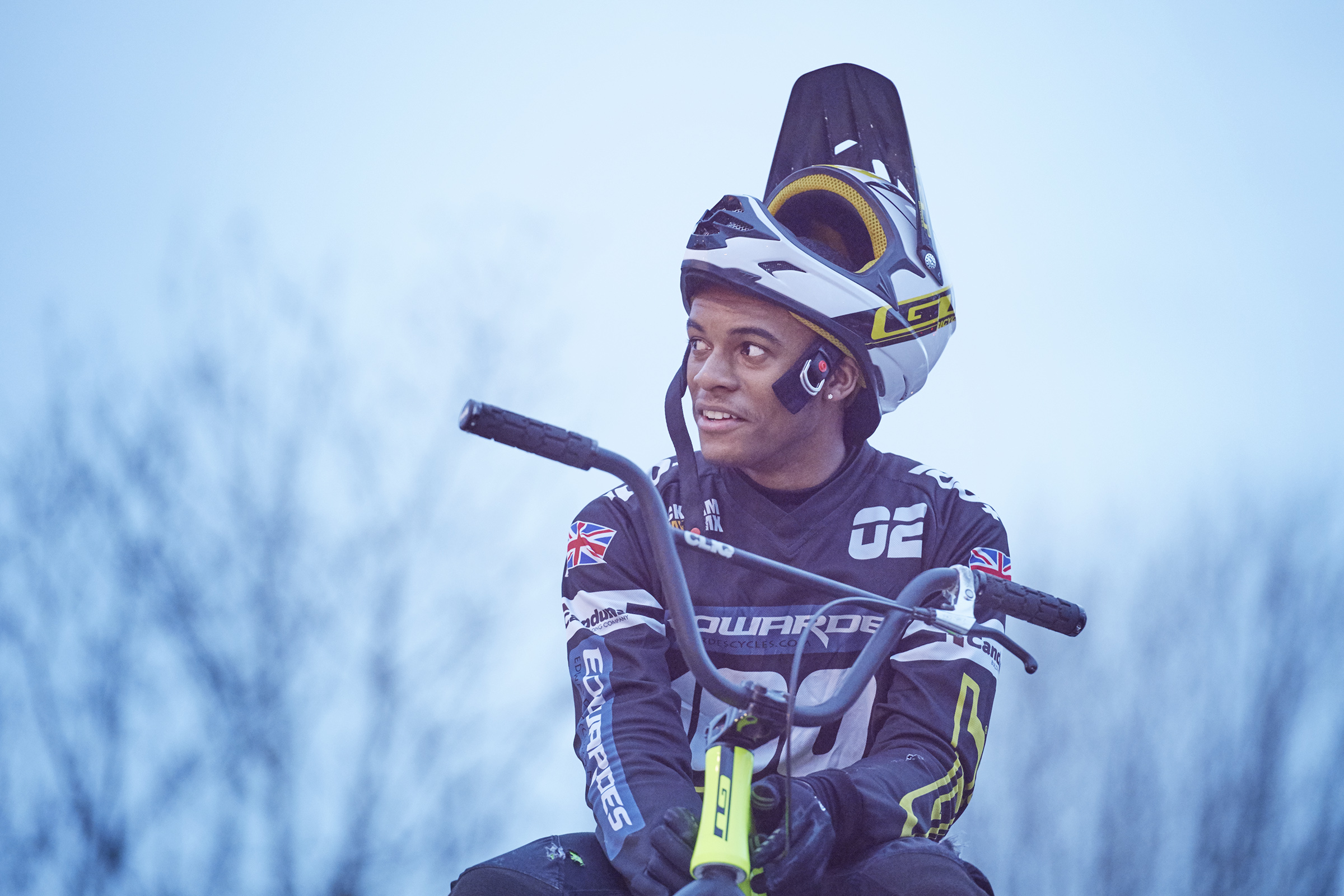 The likes of Kye are a shining example of the club’s ability to churn out champions, but its emphasis on growth extends far beyond the track. CK is determined to instil the riders with skills – teamwork, punctuality, organisation – that he hopes will stay with them for life.

Tian Isidore, a 17-year-old British and National champ (two different competitions), embodies those values. Calm, level-headed  and coming across much older than he is, Tian is fresh from competing at the World Championships in Azerbaijan the previous week – an event that did not allow him to skip out on school exams.

“They found me a place where I could sit one while I was out there,” he explains, adjusting the thick, silver chain around his neck. “CK always bangs on about schoolwork and everything fitting together – the club has taught us all a lot about lifestyle and discipline. We maintain high standards in the community and I’m definitely proud to represent Peckham.” 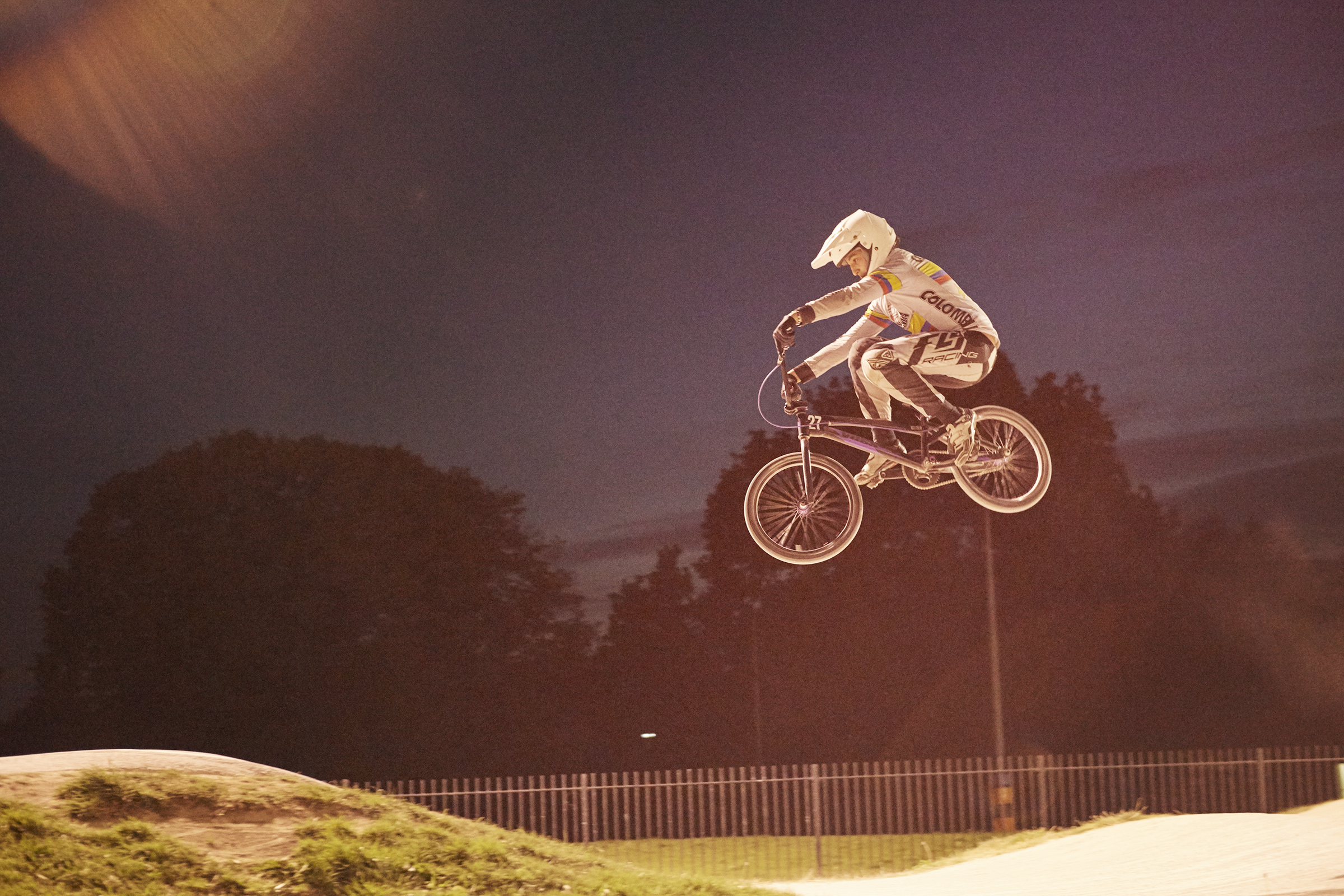 Community and pride are words that come up a lot at Peckham, which is not something anyone expected when they first moved into the Bird in Bush.

“Back at the beginning, we’d turn up to a race and the other teams were like, ‘Look at these jokers,’” says Michael ‘Big Mike’ Pinnock, a 34-year-old rider and bike mechanic with a build that justifies the nickname. “Then they were shaking our hand at the finish line once they’d caught up.”

“Nowadays, we’ve got boys on the British cycling squad and it makes me proud. This is a victory for everyone. It’s not just one person crossing the line, it’s 60 of us. When I first started, there were probably like eight or nine people. Now… I mean just look at the track,” he says, waving a huge hand towards the crowds of riders buzzing around the park. 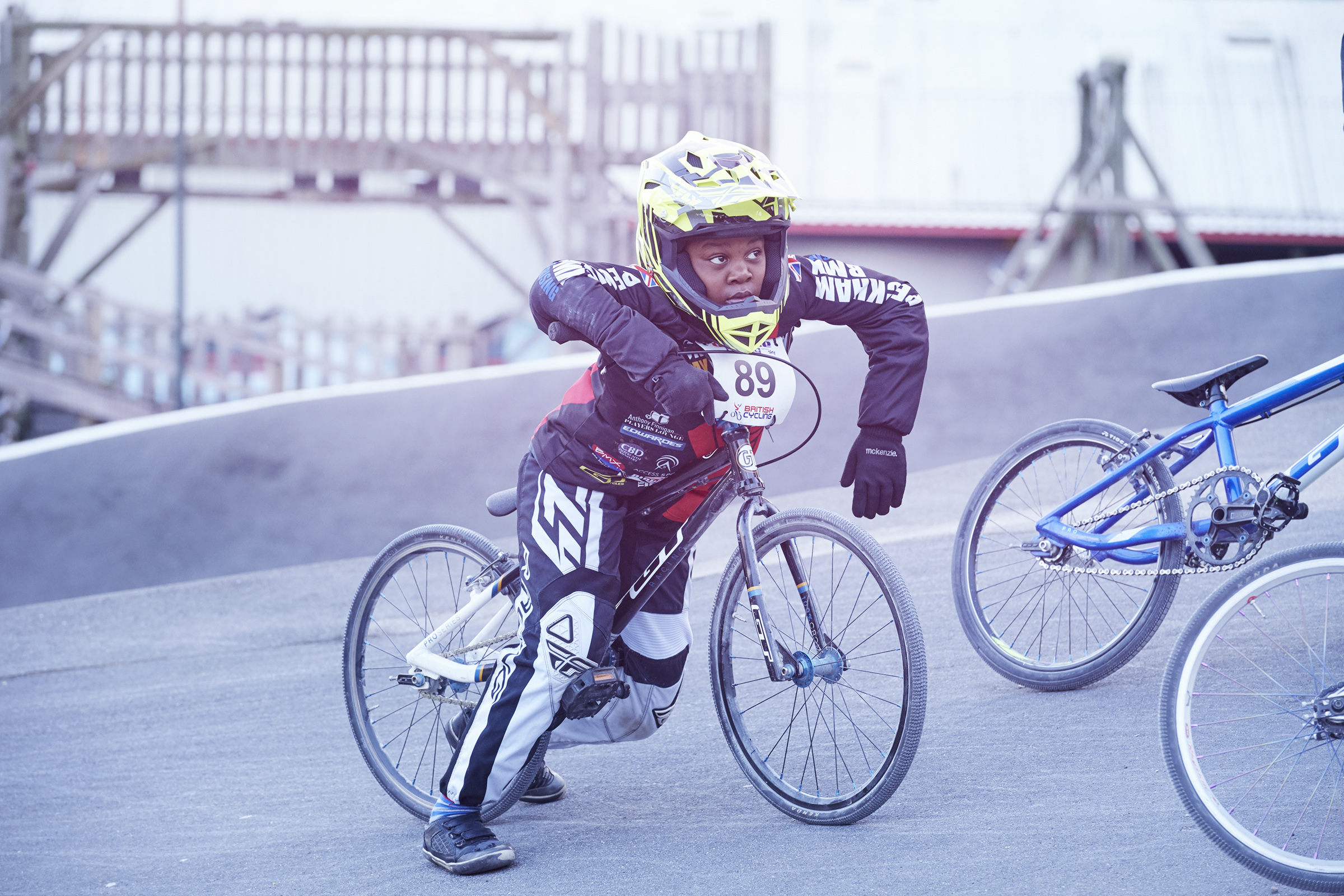 It’s easy to see what he means. Sure, winning has become an integral part of the culture here. Kat British rose to number two in the world four years ago, while Blaine Davis has been ranked number one in the country nine times and has also been a two-time world finalist.

But the club’s identity has been shaped by those who just turn up week in, week out to ride and learn. They’ve been the underdogs since they started. At this point, they like the tag.

“When you join the club, you can come and just ride,” says CK, who was awarded an MBE in 2016 for his achievements with Peckham BMX. 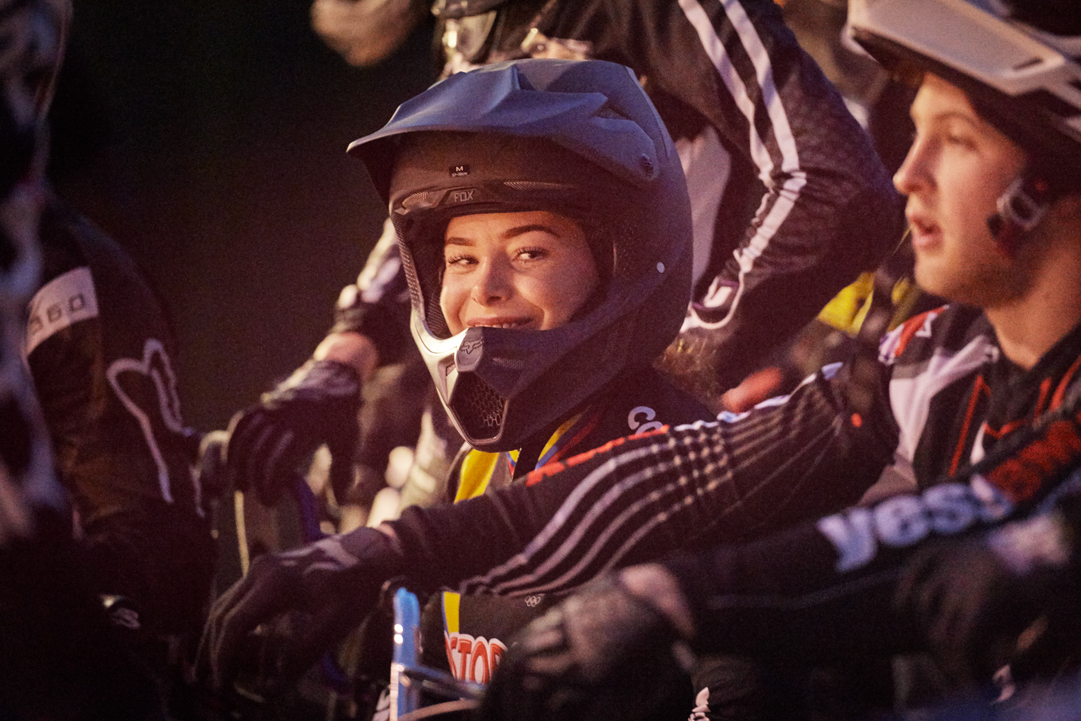 His voice trails off, as if pausing to take it all in, before he regains himself and breaks into a smile. “The triumph of the club is that we keep on achieving, keep putting out what we do. We’re gonna continue that journey.”

Linkedin
RELATED ARTICLES
OTHER ARTICLES
Our new magazine is here, starring the inimitable Mitski. Order your copy now and join us on a trip around the world.
In our first OFFF Dispatch piece, the Arce Studio founder shares her tips on standing out from the crowd.
In the last of our dispatches from OFFF Barcelona, Rufus Deuchler and Vincent Gault discuss the future of creative process.
New legislation is set to make it more difficult to hold Israel accountable for its human rights abuses.
The situation in Afghanistan remains dire, with many groups facing persecution at the hands of the Taliban.
Photographer Robin Graubard’s debut book offers an unflinching record of turbulence and change across the Balkans.