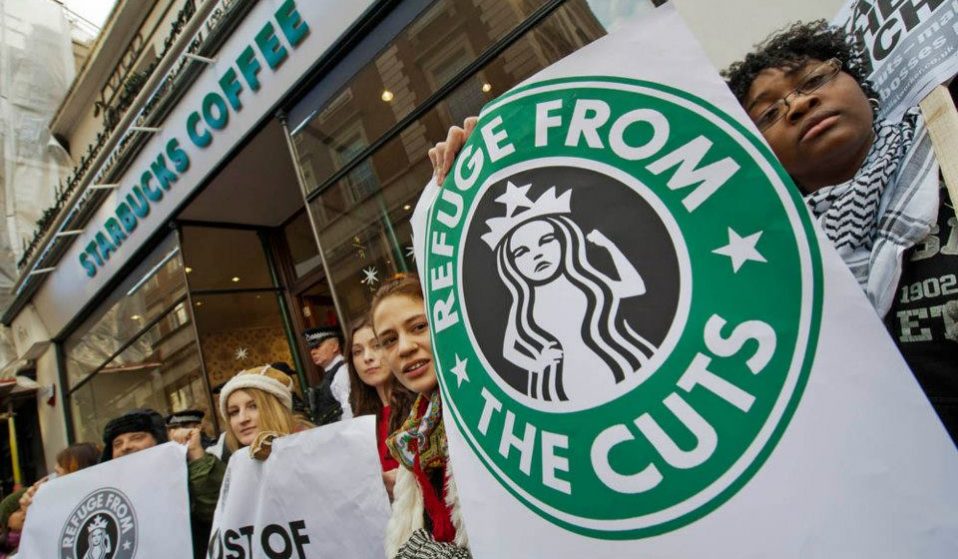 UK Uncut activist Tim Street reflects on the organisation's legacy of bringing the issue of tax avoidance into public consciousness.

UK Uncut was born ten years ago on October 27th 2010, just one week after then Chancellor George Osborne announced the deepest cuts to public spending since the 1920s. Around seventy people ran along Oxford Street in London, entered Vodafone’s flagship store and sat down to protest the company’s avoiding billions in tax.

Three days later, the second day of action took place, with protesters claiming to have closed at least 21 Vodafone stores across the UK. A few months later and Uncut actions had spread to up to fifty towns and cities and several tax-dodging targets.

Everyone from pensioners to teenagers and veterans took part in actions in towns ranging from Aberdeen to Aberystwyth. Something was in the air – a mood and atmosphere built on deep feelings of anger and a need for meaningful resistance to austerity.

Over the course of its active life, Uncut groups staged hundreds of actions. These included people from every walk of life, and ranged from small stunts, with a handful of activists highlighting the cosy relationship between HMRC and big business, to thousands occupying Westminster Bridge to oppose NHS cuts and privatisation.

But, the point was never really the size of individual actions. Rather, as street artist Mark McGowan – who goes by the moniker Artist Taxi Driver – pointed out, Uncut’s accessible and replicable actions were important because they involved visible resistance to the government’s agenda, and gave people a feeling of power and agency as part of a collective effort.

Behind the scenes, the group organised with a range of allies – from trade unions to local anti-cuts activists, as well as women’s rights and disabled people’s groups, who were at the forefront of actions. They also researched economic and tax justice issues for blogs and talks, often with the help of established NGOs such as the Tax Justice Network, who had laid much of the analytical ground for Uncut’s success in the first place. 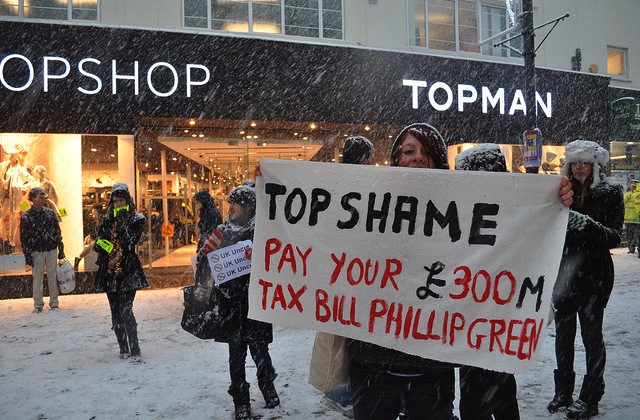 Everyone who set up, took part in, or supported a UK Uncut action played a role in bringing the issue of tax avoidance to national – and international – prominence. The ongoing importance of creating a just tax system to support our vital public services has been made stark by COVID-19, while also serving as a sharp reminder of the lasting damage wrought by austerity over the past decade.

I’d heard about the idea for Uncut’s first action through a friend who had started an email discussion with several activists, many of whom knew each other from university or previous campaigns and protests. The plan was to meet at 9.30 am prompt on the morning of the action outside The Ritz hotel in London.

People were told in the call-out for the as yet unnamed group’s action to: “Look for the orange umbrella. The Ritz is not our target. The target and plan will be revealed at the meeting point and then we’ll be on the move very quickly so please, please be on time.”

Behind the buzz and bravado, these protesters had serious intentions. They were taking action to show that there was an alternative to austerity, and to oppose the government’s mantra that the UK was broke, and that ‘we are all in this together’.

Such statements were shown to be falsehoods by the fact that the poor, vulnerable and marginalised were being made to pay for an economic crisis caused by the banks, while rich individuals and corporations were dodging huge sums in tax. 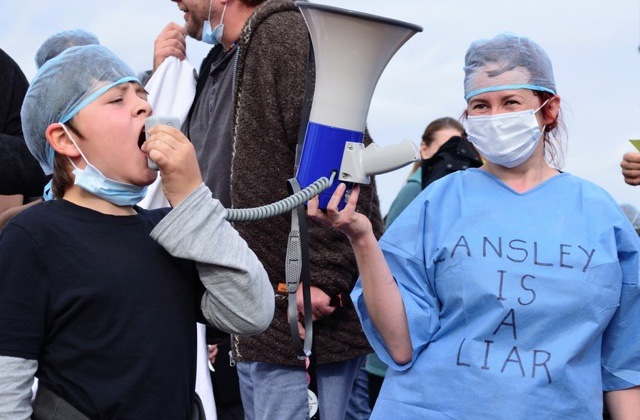 In one particularly stark example, at the same time George Osborne introduced a further £7 billion in welfare cuts, news emerged that HMRC had let Vodafone off paying £6 billion in tax. Private Eye had published a story detailing how HMRC – backed by Gordon Brown’s Labour government – had taken Vodafone to court to recover the £6 billion. HMRC had won after a lengthy legal battle, only for Osborne to let Vodafone escape paying what they owed.

As more people took part in the actions and the media caught on to the level of public support for the protests, more stories of tax dodging came to light. Multi-billionaire businessman Sir Phillip Green was found to have dodged £285 million, leading to flash mob protests in branches of the Arcadia group owned-Topshop.

In 2005, Green awarded himself £1.2 billion – the biggest paycheck in British corporate history. This dividend payout was channelled through a network of offshore accounts, via tax havens in Jersey and eventually to Green’s wife’s Monaco bank account.

Since then, stories of well-known High Street names engaged in tax dodging have snowballed, with new revelations regularly coming to light as the media began to dig deeper. This was followed by the leak in 2016 of the Panama Papers, which illustrated the methods by which the wealthy exploit secretive offshore tax regimes.

Tony Smith, one of the activists involved in starting UK Uncut, outlined how the first protest filled a perceived void in organisation and action. Smith and his friends had attended a rally organised by trade unions and other left-wing groups outside Downing Street on the day (20th October 2010) the cuts had been announced by Osborne. 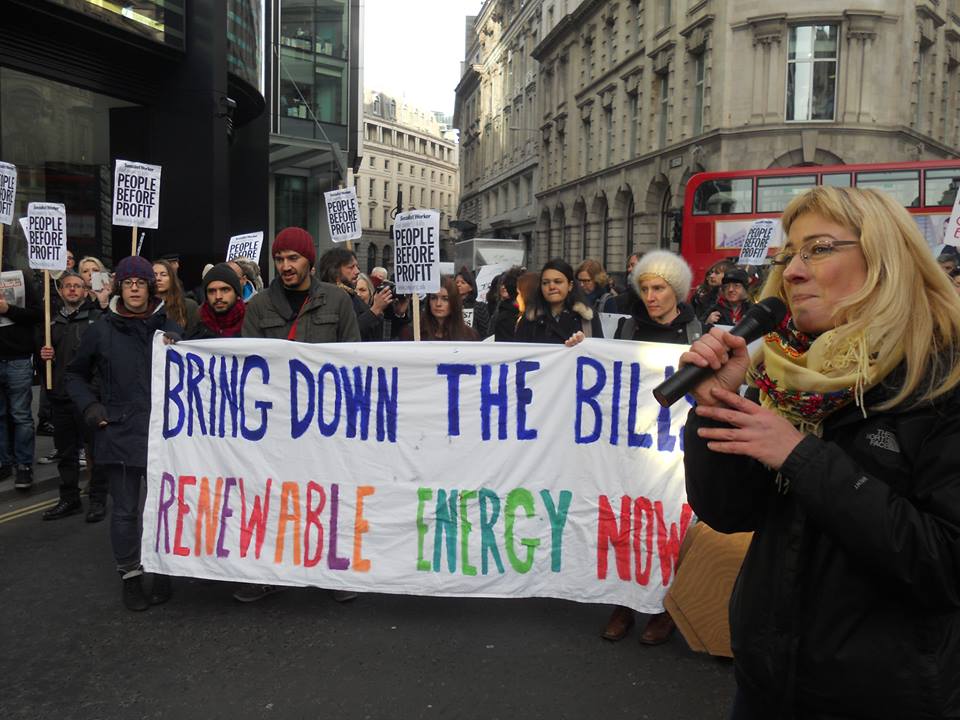 He recalls the feeling of “disempowerment” and “depression” that such events, though well-meaning, created. A sense of failure regarding the 2003 protests against the invasion of Iraq – a defining political experience, which radicalised many from this generation – lingered on.

It was clear to Smith’s circle of friends that they had to think about how things could be done differently. “We realised that nobody else was really organising at that moment,” he says. “So there was a need to get this battle started early.”

At the start of UK Uncut’s fight against austerity, social media platforms such as Twitter and Facebook proved vital. These tools enabled activists to bypass established political and civil society groups, and the often-formulaic mass rallies, in favour of a more decentralised and spontaneous approach to protesting.

UK Uncut partly borrowed and developed this model of organising and communicating from the UK’s vibrant environmental movement – especially groups such as Climate Camp and Plane Stupid. Uncut activists had developed vital knowledge and skills by previously taking part in these group’s regular protests, meetings and social events.

One of the main reasons UK Uncut was not able to maintain its early dynamism over the longer term was its need for secrecy. This secrecy was necessary, to some extent, to enable Uncut to maintain an element of surprise around its actions and capabilities, as well as protecting organisers from the police and security services. 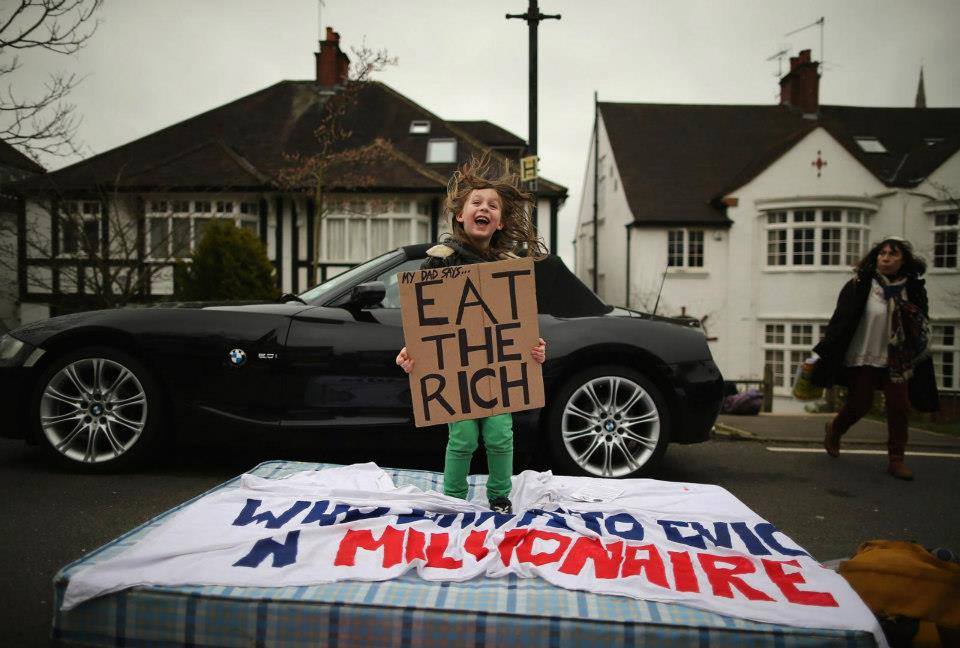 But being secret limits a group’s ability to recruit new organisers and creates pressure. Everyone involved was a volunteer trying to run a rapidly growing and in-demand group on a shoestring budget, which increased the potential for activist burnout.

Burnout can also arise from the inevitable personal and political disagreements that occur between organisers and the perceived need to always be doing something bigger and better to stay relevant and in the headlines. Yet without always being able to discuss these issues publicly and openly it was — and still is — difficult for the wider social justice movement to provide support, and understand why some of the group’s ideas and actions worked better than others.

Looking back now to consider what impact Uncut’s actions had, the first thing that springs to mind is my experience of hearing colleagues at work and strangers in shops discussing the problem of tax avoidance as an obvious injustice, and the urgent need to confront it. The fact that UK Uncut was able to clearly communicate with people, bring this issue into the public consciousness, and make tackling tax avoidance a question of political common sense is an accomplishment to be proud of.

The group also had an influence on governments and political parties. Owen Jones’ recent book about Jeremy Corbyn’s leadership of the Labour party This Land: The Story of a Movement cites Uncut as a key precursor to Labour’s radical turn under Corbyn. In addition, the European Union and several governments around the world have taken up the cause of tax avoidance in recent years, though corporate giants and their political allies have predictably tried to shut down any meaningful reforms. 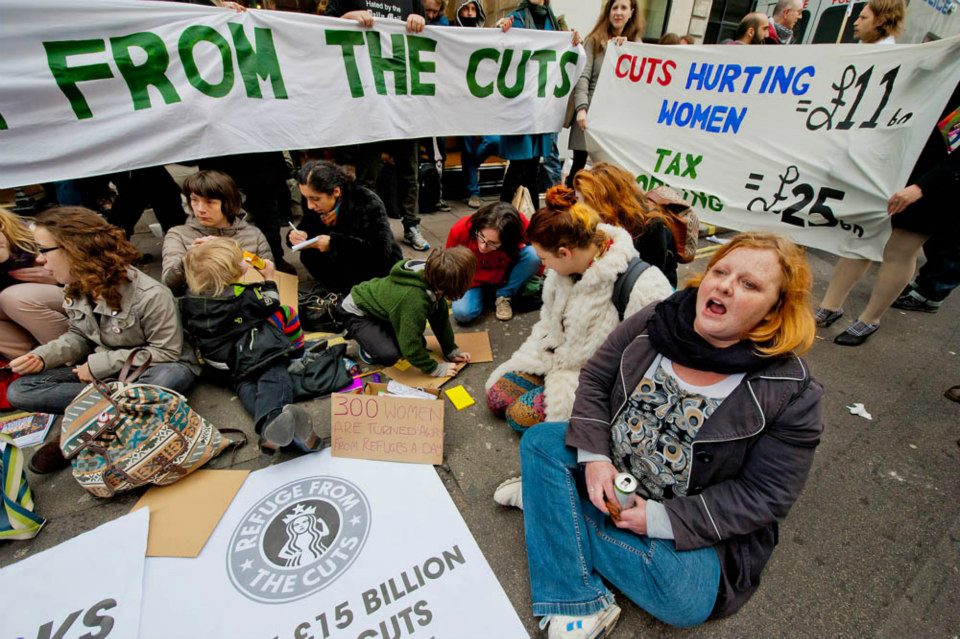 Uncut was also influential on several other campaign groups. A number of Uncut activists were heavily involved in Occupy London. Uncut organisers created UK Uncut Legal Action, which in 2013 took HMRC to the High Court over its decision to let Goldman Sachs off a £20 million tax bill.

More recently, Sisters Uncut were founded in 2015 to take action over the impact of austerity on women, focusing on domestic violence services. Another less-recognised influence UK Uncut appears to have had was on Extinction Rebellion, whose actions in the capital have deployed similar locations and tactics.

The power direct action has to advance social and environmental justice shows that it will remain a key tool for activists, despite the government’s plans to criminalise civil disobedience. My experience with Uncut taught me the importance of thinking carefully and strategically when organising actions, being bold and decisive in executing plans, and practising empathy and kindness.

Ultimately, UK Uncut was most successful when it created a sense of collective action and provided people with hope and a feeling of agency, based on a positive alternative vision to austerity. These are values which must be at the core of the next generation of activism. 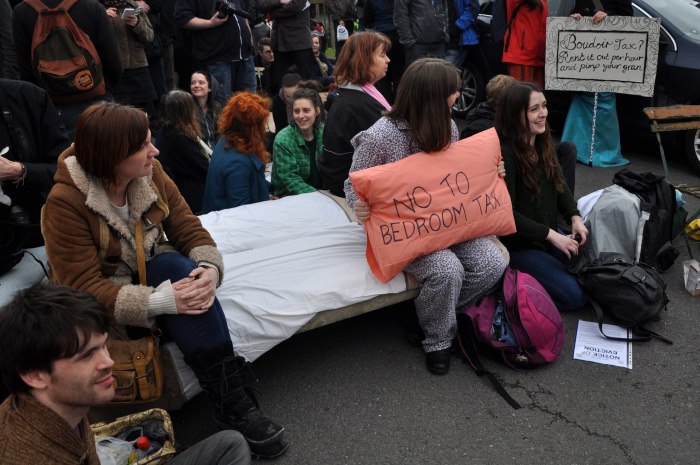 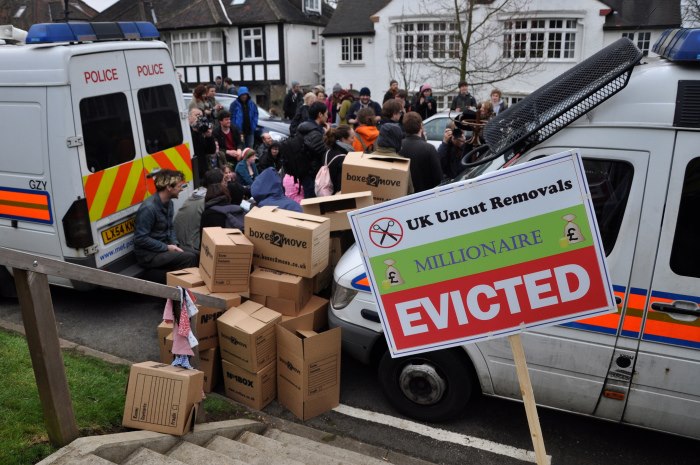 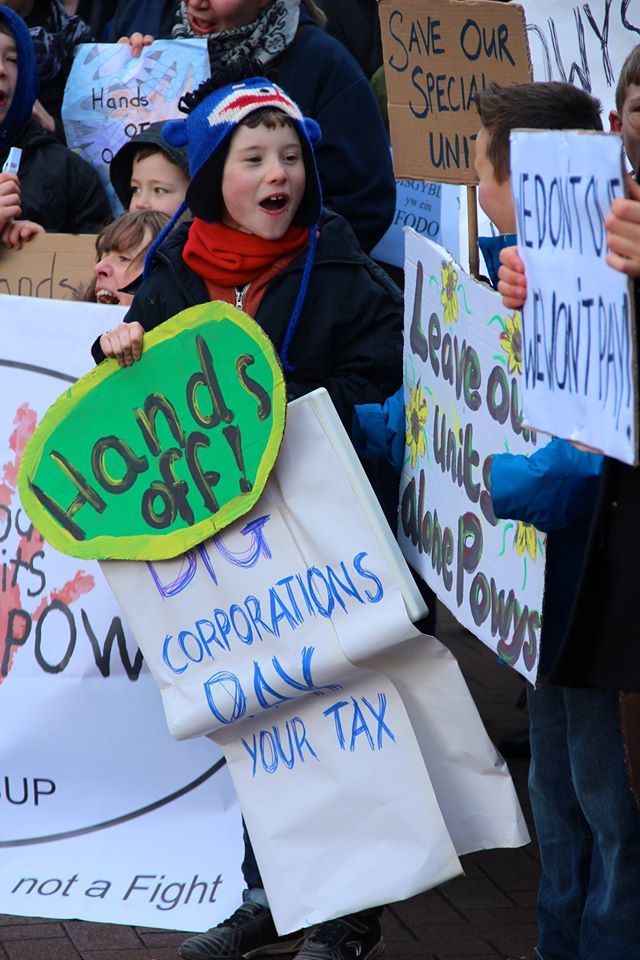 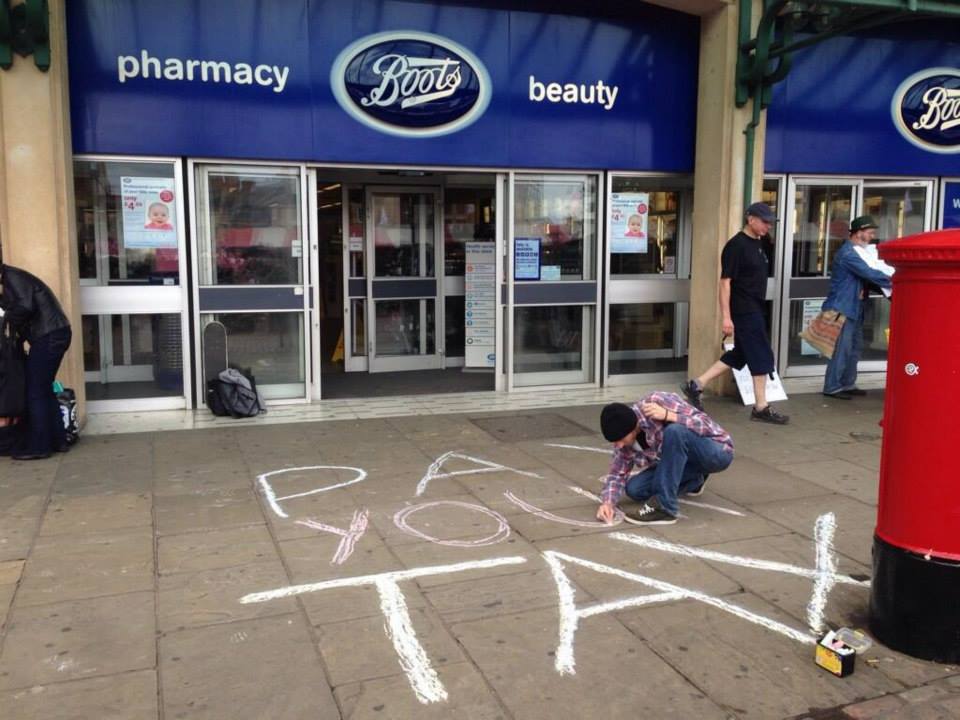 Linkedin
RELATED ARTICLES
OTHER ARTICLES
As she gears up for the release of her first book, the 24-year-old climate activist talks standing up to authority and building a more inclusive movement.
A recent High Court ruling against the right to wild camp in Dartmoor National Park sparked the largest land protest in history – and campaigners say their fight is not over yet.
Tristan O’Neill’s shots of dancers caught in moments of reverie at the height of rave’s golden age are a testament to the UK’s legendary club culture.
Activists and campaigners are fighting back against new laws that would seriously undermine the ability to take industrial action, calling it an attack on fundamental workers' rights.
Photographer Becky Tyrell went down to the fading banger and stock raceway to meet a community desperate to keep it alive.
Since 2007, Gideon Mendel has made 20 trips to document floods in 13 countries. The result is an alarming record of what has already been lost to the climate emergency.