News & Politics / ‘Dead time’ and the broken world of work 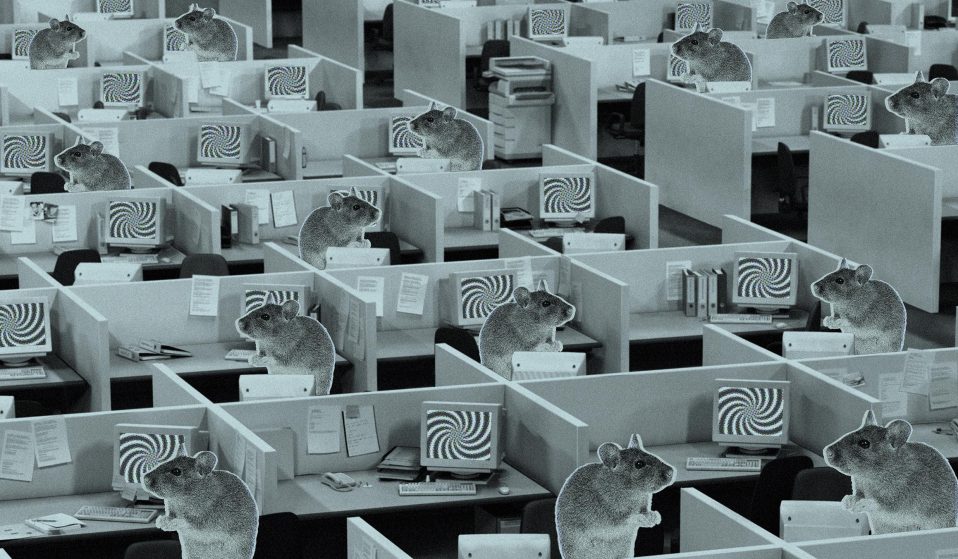 Unpaid time spent at work while not working is a ubiquitous feature of the gig economy, and how we think about it has huge implications for the future of work and workers' rights.

Unpaid time spent at work while not working is a ubiquitous feature of the gig economy. And, how we think about it has huge implications for the future of work and the rights of all workers.

“You’re always waiting for a job – you’re basically doing nothing, just waiting for the call,” says Nader Awaad, an Uber driver living in Walthamstow. Awaad needs to do between 12 and 15 hours of driving a day to take home a profit. Yet, he estimates that he only spends about 60 per cent of that time being compensated by the company for his work. So what makes up the remaining 40 per cent?

Fretting about the next patch of work is a familiar concern for any self-employed person, but that feeling is particularly acute in the demand-centred world of the gig economy. That liminal space of dead time (waiting in work for work while being unable to work) is one of many grey areas that disrupt work’s traditional binaries – gig economy workers frequently fall between full-time and part-time work, employment and unemployment, self-employment and in-house staff. Those grey areas have spawned many very real phenomena, such as in-work benefits, where people are forced to claim Universal Credit to top up their wages. What Awaad describes is another key aspect underpinning precarious employment: dead time.

Dead time is not as slippery a concept as its mutative presence in work suggests, says Jack Kellam of Autonomy, a think tank focusing on the future of work and economic planning. “We go back to Ivan Illich’s idea of ‘shadow work’ to make sense of it – it’s time or labour, which is necessary and unavoidable from within the performance of the job, that isn’t paid by the employer.”

Despite its clear presence in forms of precarious labour, dead time is most often understood in conjunction with what we still view as the archetypal form of work – something close to forty-hour week, revolving around a 9-to-5 working day, and that requires travel in order to perform the work. Productivity website Timely describes the phenomenon as “all the time we waste every day. It’s futile…” It goes on: “Most of us let this time slip through our fingers, preferring to skim through our phones or read the latest news. But if you can master the art of utilising dead time, you’ll be surprised at the difference it can make.” This framing of dead time is dominated by employers trying to “extract value from waste,” as Kellam puts it.

There are, of course, forms of dead time associated with full-time working patterns that occur without remuneration. Over the summer, Autonomy launched ‘Claim the Commute’, a campaign to encourage employers to pay half of employees’ commuting costs to prevent what they call a “hidden workers’ tax”. But embedded in the report past this specific instance was an ideological critique of dead time itself. “People just assume [commuting] is a form of necessary downtime that they have to do to get a job,” Kellam says, “but really, it’s the form of work you’re doing every day; it’s a necessary part without which value couldn’t be realised.” Where reimagining commuting holds value for workers in standard forms of work, interrogating dead time where working structures are more precarious – in self-employed, freelance or entrepreneurial work – becomes even more important.

As workers return to the office, we need to reopen the question of who should foot the bill for commuting@Autonomy_UK's new report – Claim the Commute – proposes a scheme where employers would cover half of their staff's fares 👇pic.twitter.com/m2sFcOAdMI

For many precarious workers, dead time is woven into the fabric of the work itself. It’s something content writer Jess Collins has had to battle with, as her line of work distinguishes clearly between billable and non-billable activities, both of which are essential to carrying out her job. Dead time for her includes time spent on unavoidable general admin like client phone calls and replying to emails. The switch to time-tracking using an app made her “much more aware of sinkholes such as calls. Clients constantly want to chat, but when I see how much time I spend on calls, it all adds up.”

Dahir Mahamud, another driver, bemoans the dead time built into his overall journey. “You drive five miles to a pick-up place, which might take an hour, and then drive a customer a mile which takes five minutes. But the fare starts from when you pick the customer up.”

Alongside the financial implications, dead time is a quiet mental drain. “I’ve formed some really bad habits,” says Richard Lucas, a Deliveroo rider in Nottingham. “I’m constantly checking my phone, constantly under time pressure and stress (…) with the dead time comes self-doubt, and asking ‘is this worthwhile?’”

Although Awaad says he feel “burned out and tired on the job”, he enjoys the flexibility of the work – he recently took the morning off to attend a strike organised by the United Private Hire Drivers, a branch of the Independent Workers of Great Britain union. But what small concessions on flexibility look like in real terms is less clear: “Your mobile is always on, and you’re always on alert. You can’t switch it off. Sure, you can turn it off when you’re having a break or having lunches, but if you don’t have it on, you don’t accept your jobs, and then? You lose it.”

This is what Kellam calls “the hidden abode of dead time”; what flexibility masquerades as here is fear, a choice between working and waiting, or switching off and losing out. As Mahamud puts it: “You’re a slave to it – there’s no choice in the matter.”

"@Uber's CEO earned $40million last year and compare that to the wages that you have, poverty wages, that is unacceptable!"

Dead time is everywhere in self-employment, an extension of ‘bogus self-employment’ that already sees workers denied holiday pay, sick pay, National Insurance contributions, a proper minimum wage and employment rights. These strategies have the intended goal of rationalising work to its absolute crux, reducing it to such an extent that workers are only deemed necessary at times when they can add the maximum capital value.

That ideology is affecting how self-employed workers understand work and ‘working’. Writing for Toggl, Joshua Danton Boyd describes how the time-tracking app altered his assessment of his own efficiency: “I could feel this ‘dead time’ building up and knew that come the end of the week, my tally would have a disappointing gap where work should be, and instead could have been labelled as ‘making witty comments on Facebook’ or ‘scrolling through Tumblr’. Toggl began to act as an encouragement to stop wasting time and to get on with something proper.” Here, not only does the onus of rationalising work transfer from the employer to the employee, the move saps any joy, distraction and relief out of the work, too.

On a similar note, although I enjoy many bolt-on benefits, my work as an hourly paid, freelance social media manager has also changed what I understand as being ‘in work’, after being encouraged to track my time using a productivity app whilst working from home. The dividing lines are very casually drawn, but labour (in this case, planning, producing and posting content) is only really billable in the latter two instances; other less categorisable activities, like planning content, admin, and waiting for replies, are necessary to perform the work, and yet become more dead time.

What both examples point to is a trend ushered in as home working increased during the pandemic – a rise in productivity apps, that, when enforced by companies, can warp into sinister forms of home surveillance. And grappling with wider questions around assessing productivity in the context of dead time hits a tension at the heart of theorising the future of work. Should we be fighting for a strict delineation of productive labour, and be given total freedom from the time we don’t spend in work? Or should we step back from a relationship between wages and timed work, and instead aim for measures like Universal Basic Income? Either way, we’re not there with dead time at the moment, as Kellam explains.

“The most important thing at the moment is getting workers to understand that the dead time of their day is actually work they’re performing,” Kellam adds. “I think that’s really important in getting a handle on the way the contemporary gig economy is working.”

Linkedin
RELATED ARTICLES
OTHER ARTICLES
Photographer Ira Lapu documents the lives of ordinary Ukrainians living amid a brutal conflict.
The photographer reflects on a decade which saw the rise of MTV and the flourishing of new genres.
Over the weekend, the United Families & Friends Campaign organised a protest calling for an end to deaths at the hands of the police.
Planet Ardbeg is a 40-page sci-fi anthology created by three cutting-edge artists.
The campaigning charity are on a mission to increase inclusion, participation and representation of Black people in trail running.
A campaign led by ex-torture survivors and refugee organisations has left the Tories with no planes left to carry out their callous scheme.