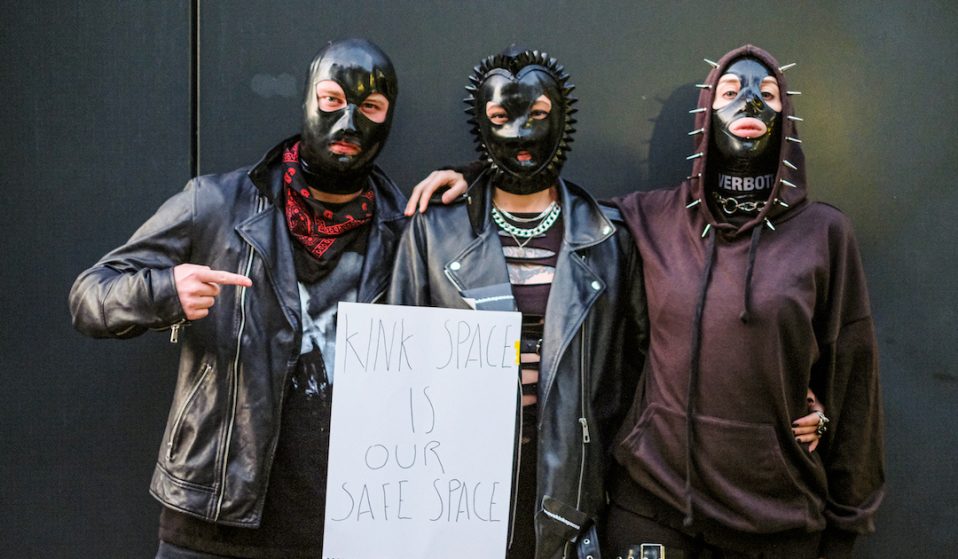 On a balmy July evening, some 200 members of the kink community assembled outside Tower Hamlets Town Hall. Clad in masks, leather, latex, chains and padlocks, they held signs which read, “united in leather”, “kink space is our safe space” and “bottoms or tops, we all hate cops”.

Inside the Town Hall, a hearing was taking place regarding the Wapping club E1 / Studio Places – one of the last surviving queer-friendly kink spaces in London. The club had recently applied to have a ‘no-nudity’ clause removed from its licence, which the council had objected to. The hearing – which the crowd watched on a small screen at the hall’s exterior – was to decide the final outcome.

After Aspire (the party which took control of the borough from Labour last April) councillors had taken their seats, 50 kinksters filed into the hall. Behind me, a man with white-blonde hair clutched a long silver staff with his pale fingers. In front, a person waited to give a testimony in support of kink night life wearing a chain across their body, one black-painted tear dripping from their eye.

A week later (2 August), Tower Hamlets agreed to approve E1’s request to remove the ‘no nudity or semi nudity’ condition on their licence. The decision was seen as a huge win for the kink community after months of campaigning. 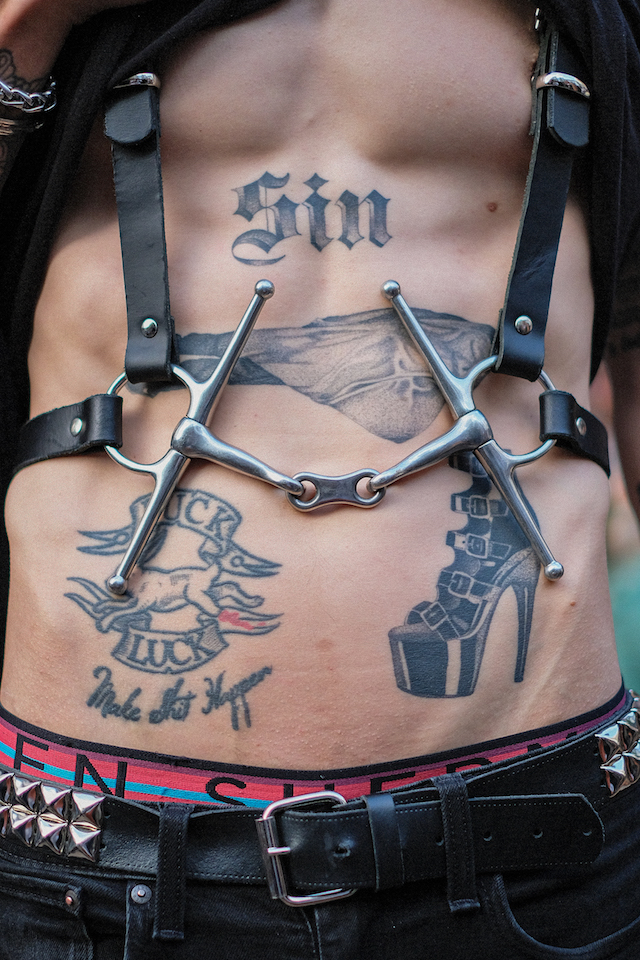 Karl Verbote, co-founder of Klub Verboten – a progressive kink night held at E1 – has been instrumental in the movement to save kink spaces. Karl was particularly concerned about the wording of the clause, which specifically identifies a “woman’s nipples” as nudity (whereas men’s nipples are not considered to be nudity), saying it posed a problem for gender fluid club nights, as it would force event organisers to make binary distinctions between genders. “We do not want to ask our community about their gender when assessing their dress code,” Karl told Huck, “we wouldn’t even think of [doing] it.”

The clause, which cites a 1982 government act, was brought to the attention of E1 and enforced by the council last March. Since then, E1 has cancelled between ten and 12 queer and kink nights. One of these was Klub Verboten, which Karl said has been taking place at another venue.

In his opening remarks, Leo Charalambides, a barrister representing the appeal on E1’s behalf, argued that “the idea that the licensing committee should impose what people wear on a night out is untenable”. Tower Hamlets is a diverse borough, he said, with a long history of celebrating queer culture. “We have consenting adults being told by the local authority what they can wear and what they can do on a night out,” said Charalambides, whose speech was met with frequent cheers from the protestors outside the town hall. 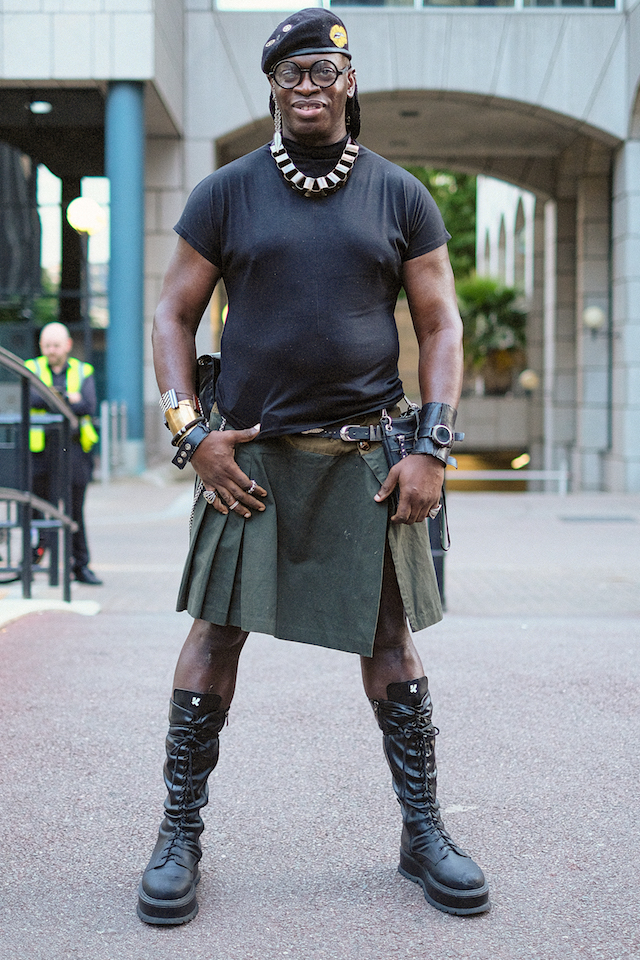 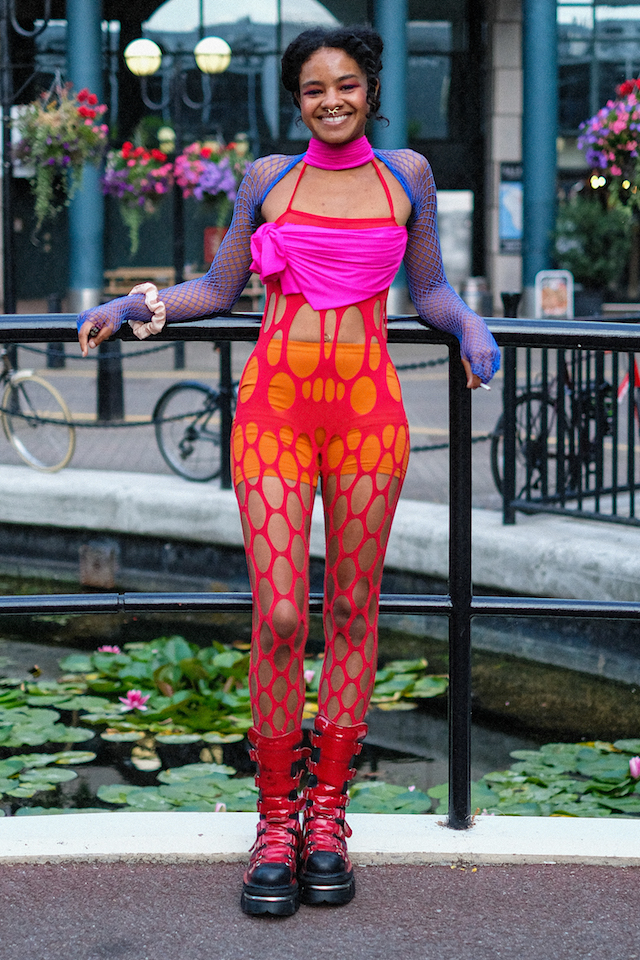 The licensing authority opposed revoking the clause on the grounds that it would “reward” E1 after the club had broken their licence agreement by violating the no nudity clause. This supposed violation involved an alleged sexual assault during Torture Garden’s Valentine’s ball. (The alleged sexual assault was reported to the police and the inquest is ongoing.)

CCTV footage from the night of the alleged assault during Torture Garden was used in the hearing to prove to councillors that E1 Studios had broken their licensing agreement. The authority was represented by John Grant, who argued in his opening remarks that “the licensing authority takes no moral view of the kink events. We do have a concern that the premises conform to safety standards.”

Despite these claims, protestors feel that fetish and kink nights are being specifically targeted. After the hearing, one protestor, Trinity Trappett – a Klub Verboten regular – said to Huck that the no-nudity clause represents “an outdated view that was originally intended to protect women in environments like stripping,” adding, “This whole thing is morally corrupt.” 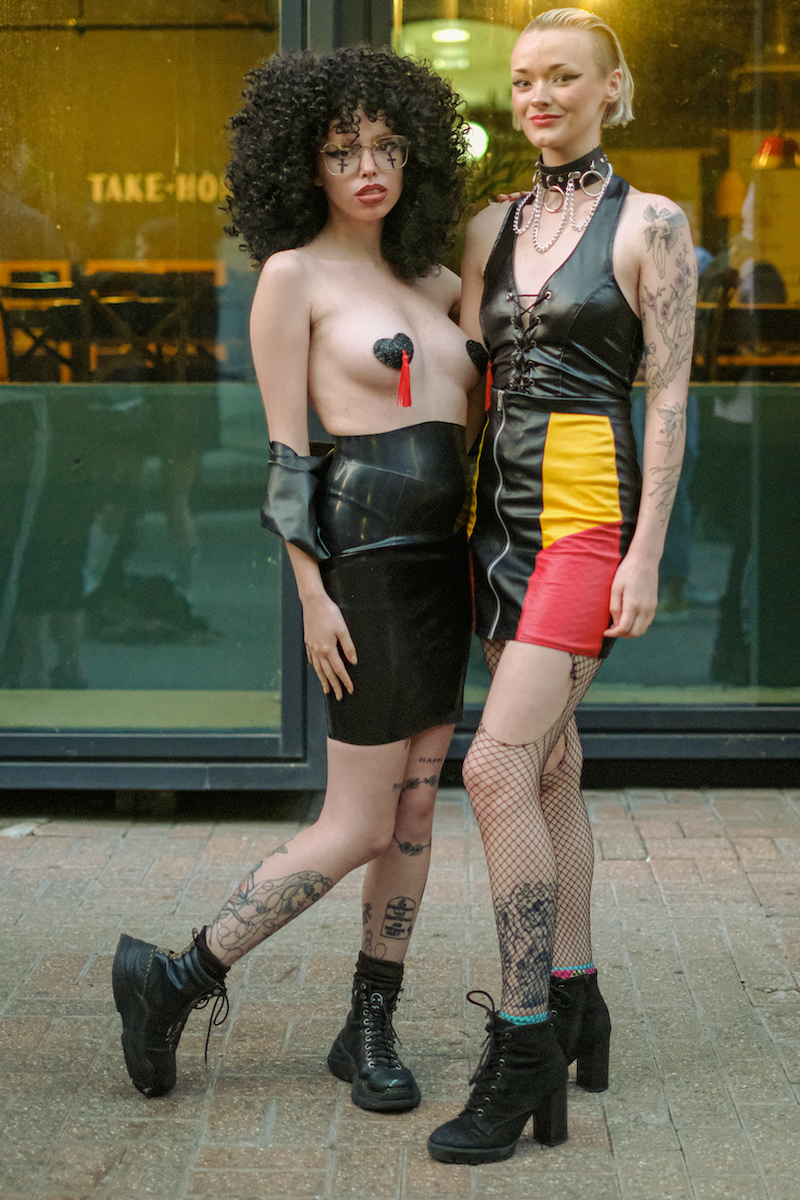 Kink nights such as Klub Verboten have their own strict safeguarding protocols. Among the people who gave evidence at the hearing was James, who works as a nurse by day and patrols Klub Verboten events on weekends with the rest of the safeguarding committee. “It’s something I take extremely seriously,” he said to Huck before the hearing. The Verboten Safeguarding Team (visible in their blue beret hats and distinctive harnesses) ensure that attendees are not breaking the rules, specifically ‘no touching without prior consent’, as well as no solo wanking, no filming or photos and no pressure. On Klub Verboten’s website, it states that: “Our team gets regularly trained by Safer Sounds Partnerships, WAVE and Verboten.” Klub Verboten has also received accreditation from Good Night Out –  an independent initiative which works to end sexual harassment and assault in nightlife communities.

E1 is one of the last remaining warehouse clubs left in the City of London. All across the city, clubs are closing at a rapid pace. At the protest, people claimed that without safe spaces, they’re being pushed into unlicensed venues without CCTV or security. Kink events could become less safe as a result. 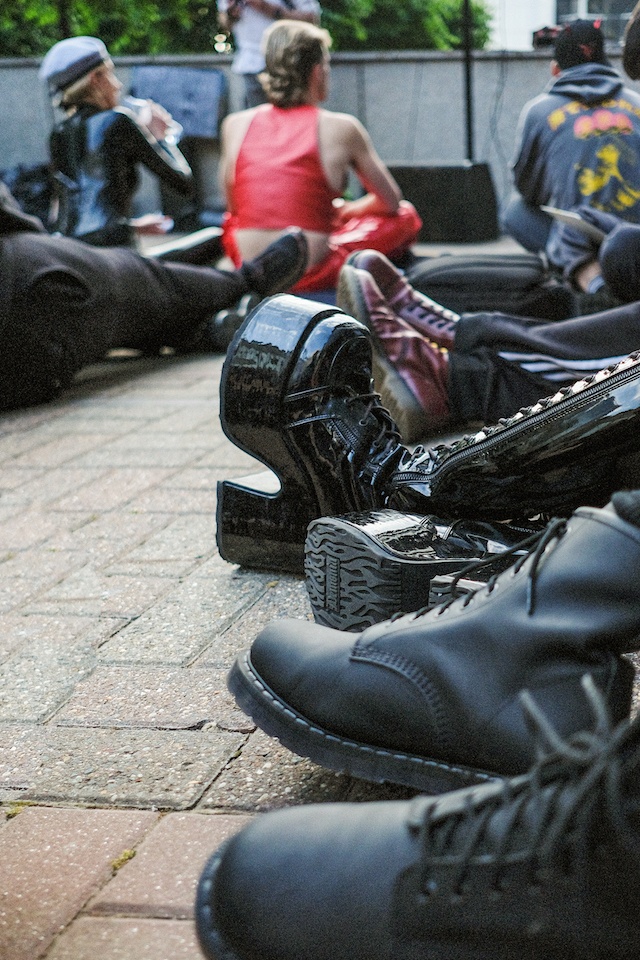 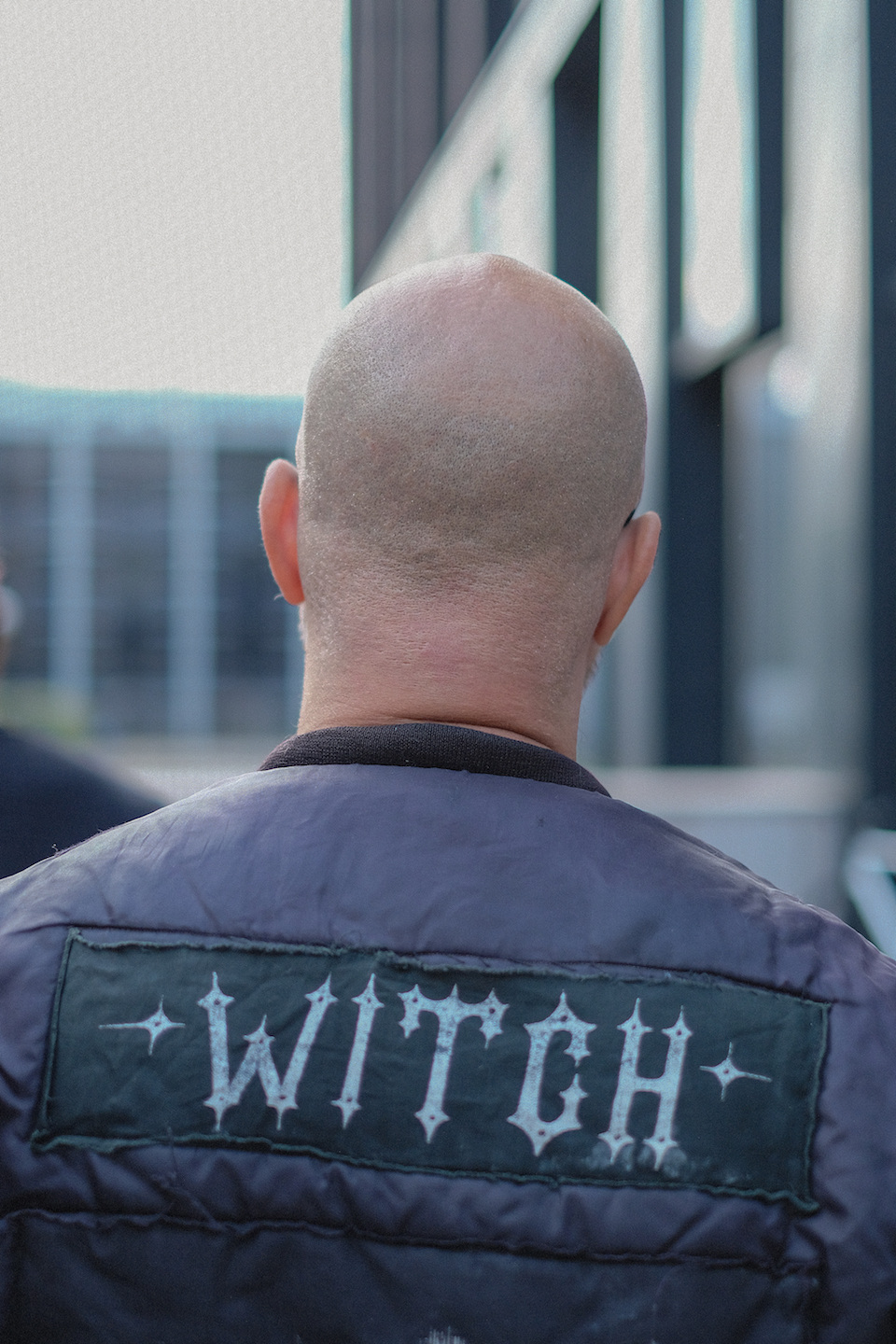 Many people, particularly non-binary people and women, said that if anything, they felt safer at kink clubs, where open dialogue about sex is encouraged. Carlos, another protestor, explained that this is one of the main reasons he and his partner attend kink events. “I find it incredible that the licensing person didn’t mention any record of sexual assault and catcalling at any of the other normal [nightclub] venues.

“The reason why me and my partner go to events like this is precisely because all that bullshit that happens in normal nightclubs doesn’t happen here. And if that bullshit does happen, people take it seriously.” He added that “kink is absolute freedom.”

This was something the council acknowledged in its final decision. In a statement, they wrote: “Given the comments made by some of the supporters as to harassment and discrimination that they had faced in mainstream venues, and how safe they felt at events such as Klub Verboten, the Sub-Committee accepted that these events were of considerable importance to the queer community.”

Kink and queer identities are interwoven for Karl – it’s one reason he pushed so hard to create a public campaign. For him, sex-positive spaces are essential. Without them, London nightlife becomes hostile to LGBTQ+ people. “This has been an emotional day… it’s just overwhelming,” Karl said to Huck after the decision was announced. “Our community has been acknowledged. [Now] we can all work together, it can only have a positive influence on general nightlife culture.” 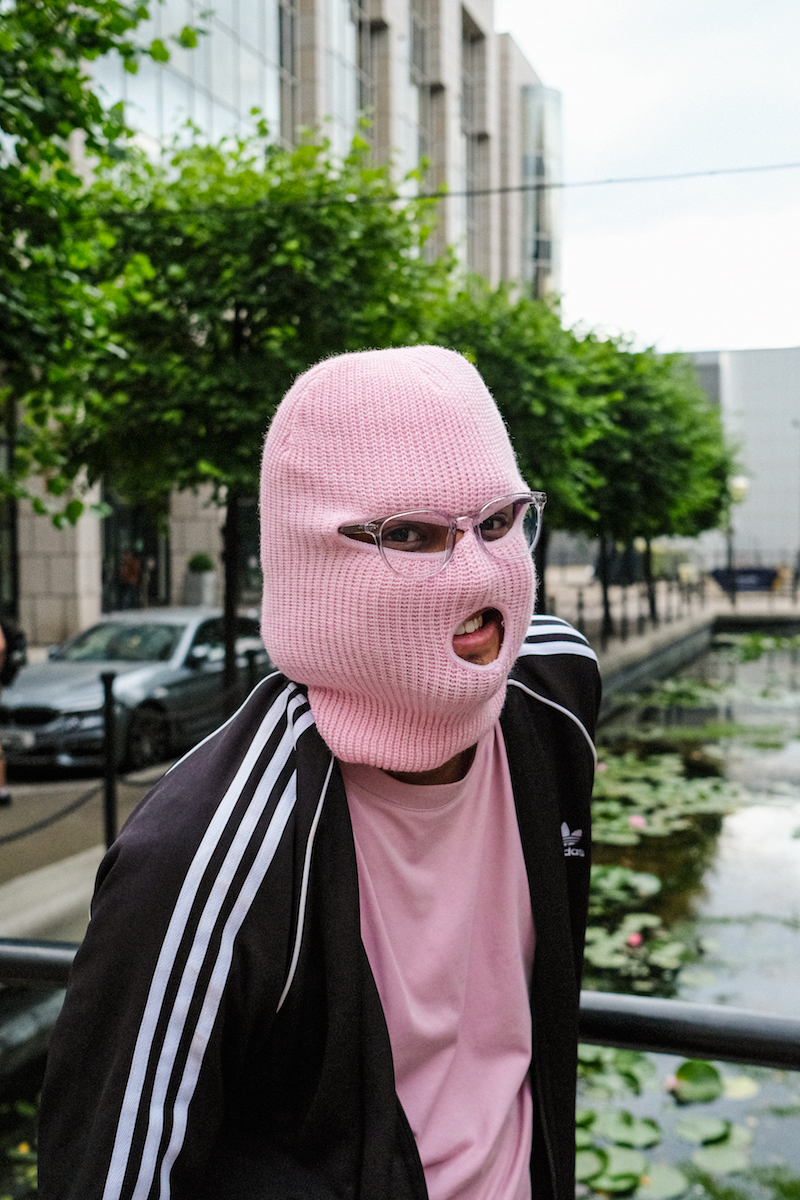 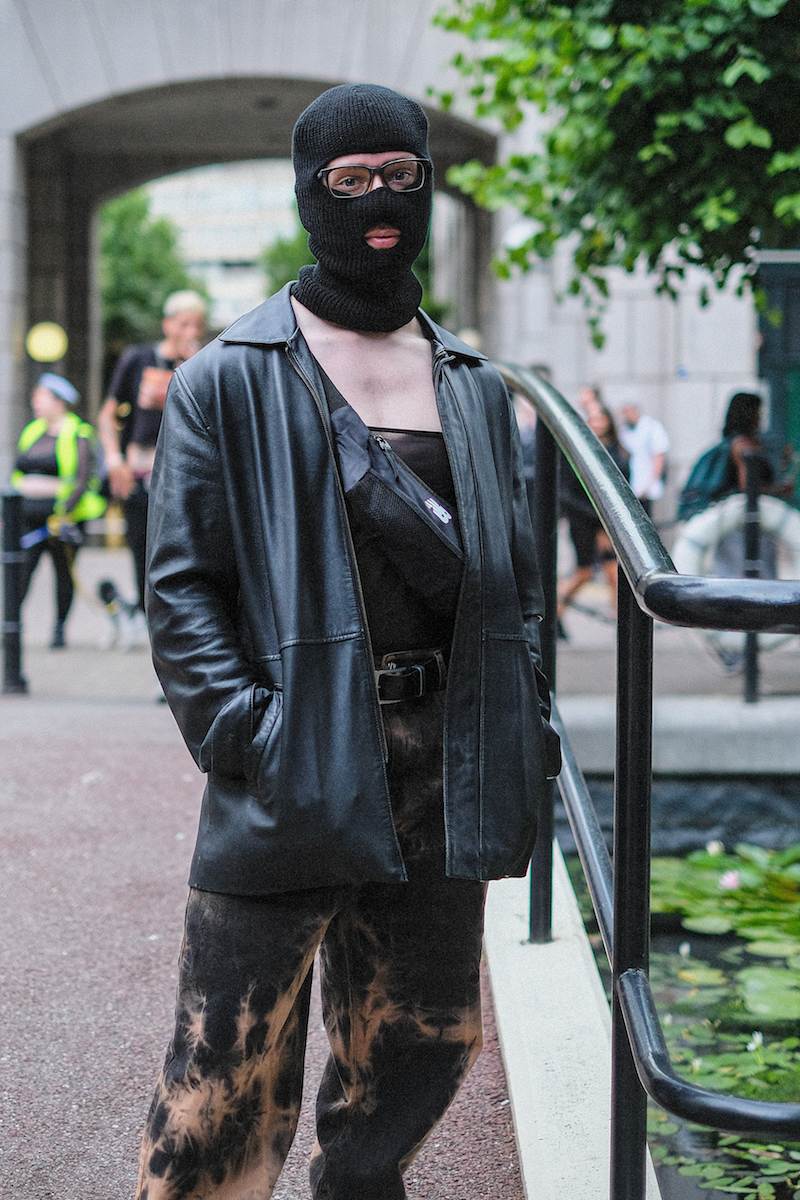 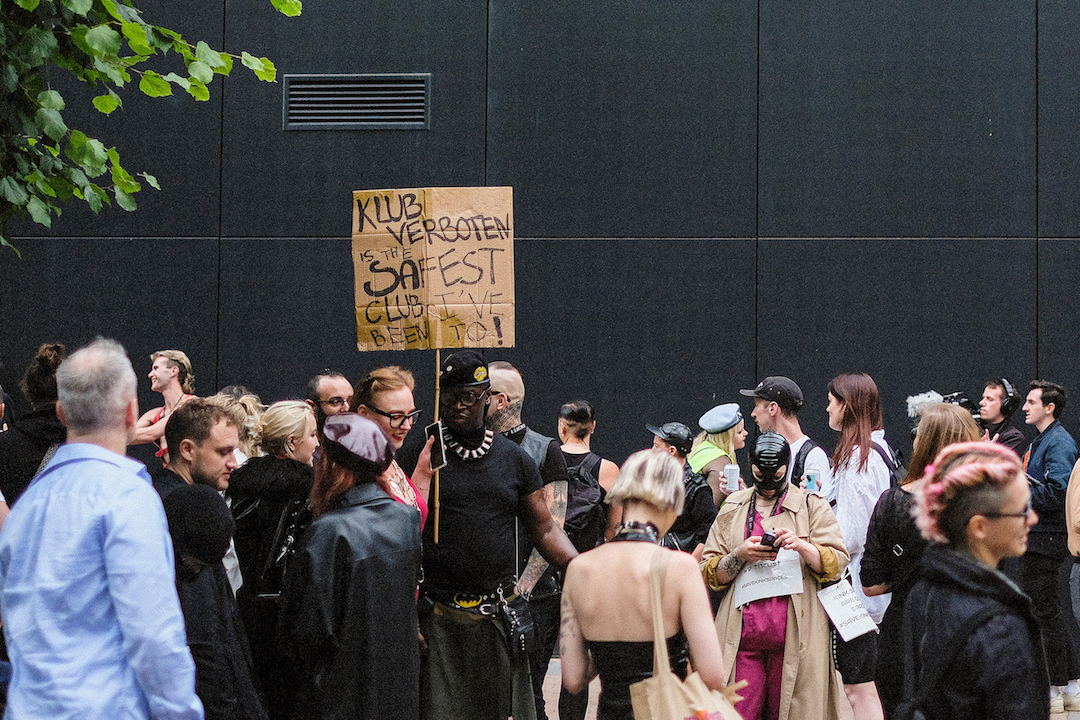 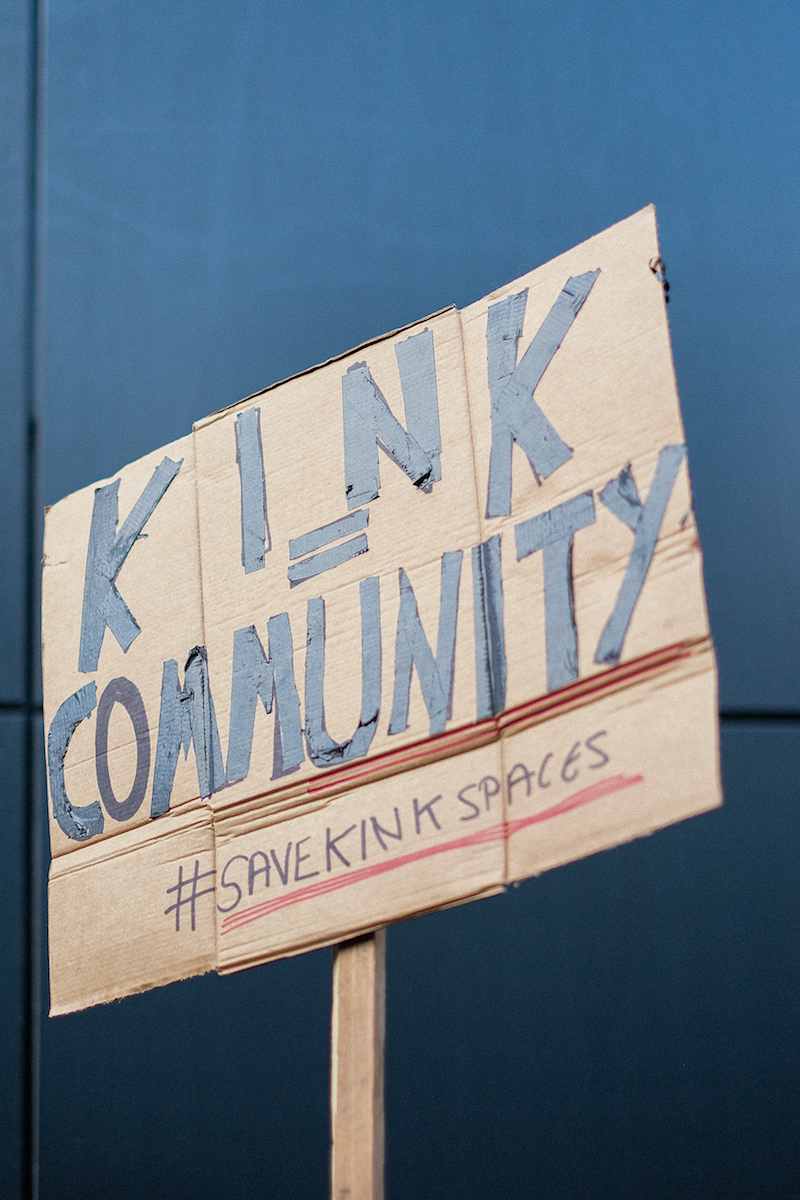 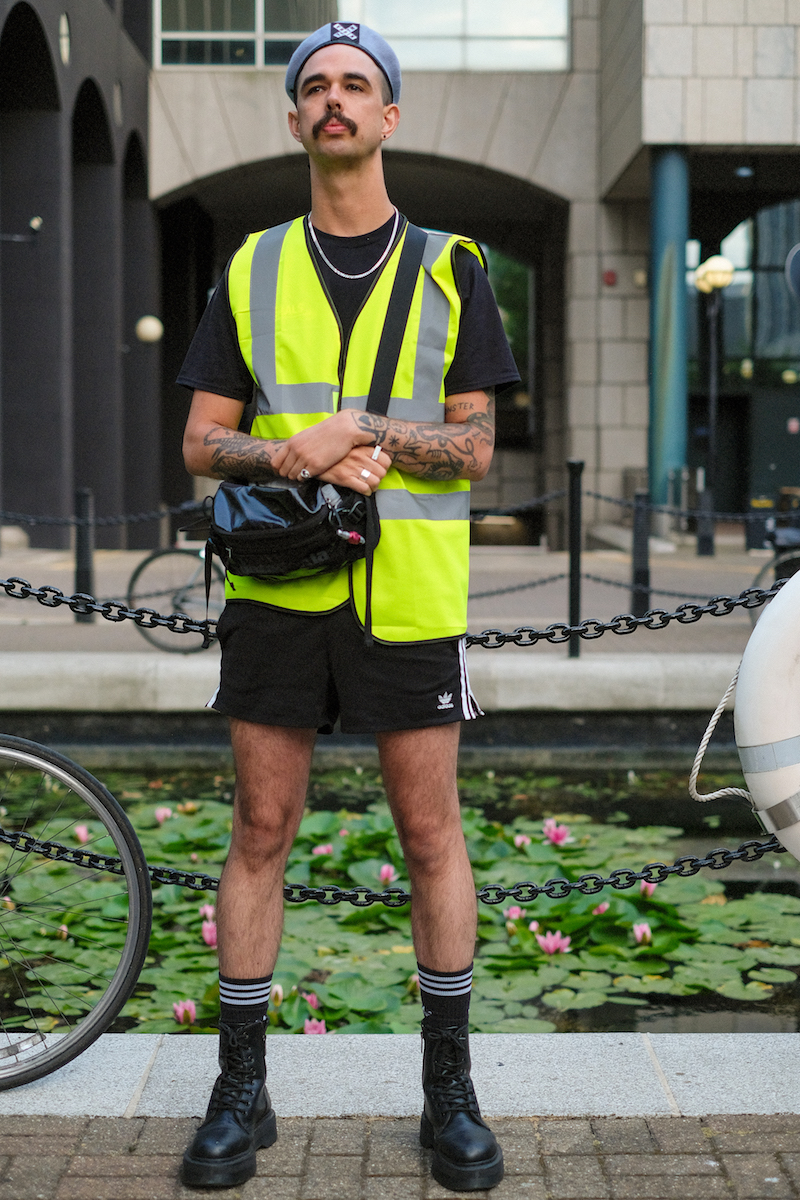 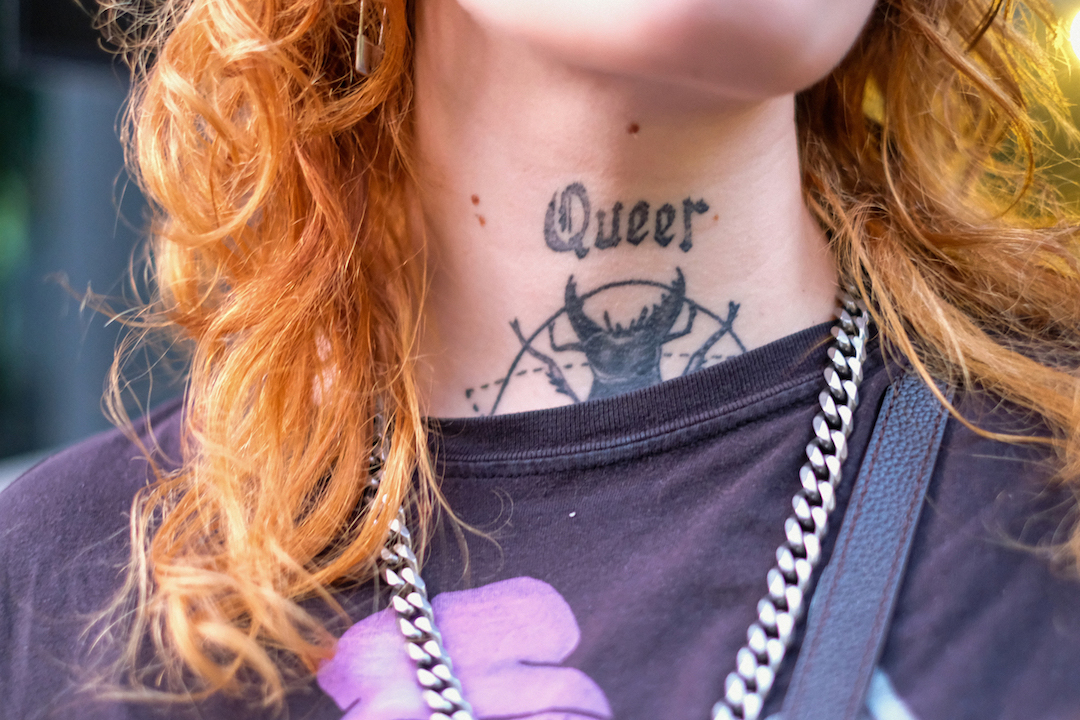 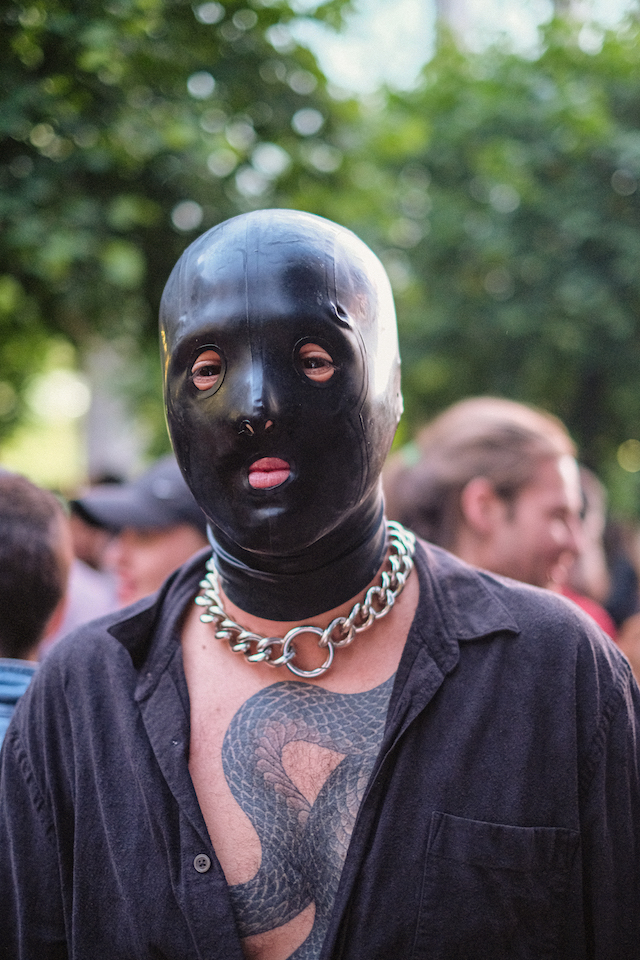 Linkedin
RELATED ARTICLES
OTHER ARTICLES
Following the announcement of an 80% hike in the energy price cap from 1st October, crowds gathered outside the offices of energy regulator Ofgem to protest and declare their intention to undertake a payment strike.
Rhiannon Adam spent three months capturing an ageing society wracked by division, isolation, and the aftermath of scandal.
A new project is documenting formerly incarcerated people as they transition back into civilian life.
Rogue landlords are exploiting young and inexperienced renters and leaving them in mental and financial turmoil, reports Niall Hignett.
Ahead of the release of their first collaborative album, the producer and rapper talk psychedelics and the state of UK hip hop.
In his 2008 series, the photographer pictured himself as Angela Davis, Martin Luther King Jr., Malcolm X, and other prominent figures.