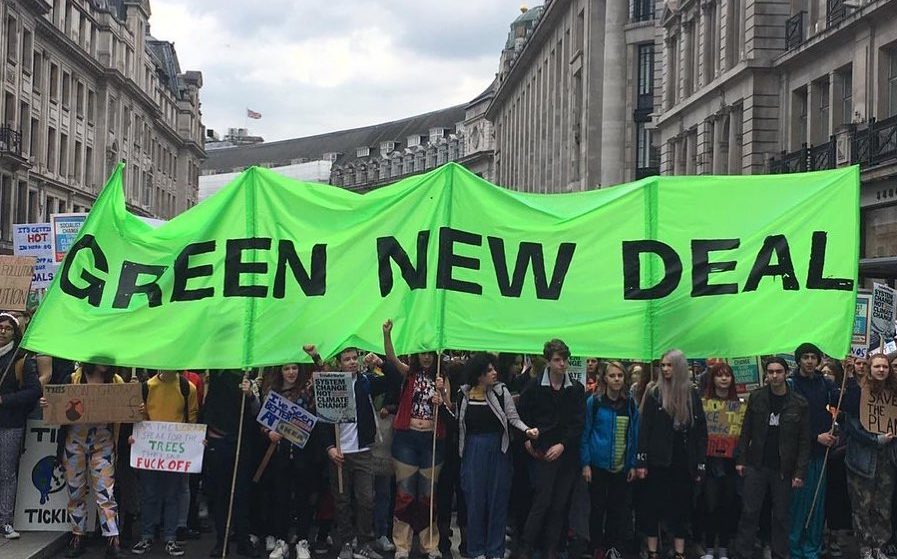 Why is the Labour leadership alienating Green New Deal campaigners as the planet burns?

Yesterday, it was announced that Labour Green New Deal would be blocked from the Party Conference, which begs the question: why is the Labour leadership alienating this vital campaign group as the planet burns?

The world of internal Labour Party organising is long and arduous. With its Annual Conference every September (except for when pandemics get in the way), activists start the process of developing motions to send as early as January. This was when Labour for a Green New Deal began deliberating on our priorities amid a new context: a pandemic, unemployment crisis, new Tory government, and new Labour leadership. Not to mention worsening extreme weather induced by climate change.

Nine months later, our ‘green jobs revolution’ motion had been submitted to Labour Conference by 21 constituency parties (CLPs). On Thursday, we received the news that these motions had been ruled out of order by the party’s Conference Arrangements Committee (CAC). The justification given was that the motion “refers to more than one subject area”, thus not meeting criteria set out in the Party’s rulebook.

The decision and the reasoning came as a surprise. The motion was written to have a tight focus on a core element of the Green New Deal: the creation of good green jobs. The thing about putting forward a plan to create millions of green jobs through mass investment and expanding public ownership is that it necessarily touches on many areas of the economy. The motion calls for investment in green tech, housing, public transport, agriculture, care, telecommunications, energy and nature. That a green jobs revolution is broad in scope does not mean it is greater than “one subject”.

Based on Keir Starmer’s track record as Labour Party Leader, it’s not unreasonable to assume that blocking this motion is yet another in a long line of factional anti-democratic moves to alienate ordinary members. The irony is that Labour for a Green New Deal is a campaign group which prioritises unity, actively engaging with the Party at every level of democratic process.

Labour Party members from numerous constituencies have submitted a resolution so that the Party Conference discusses a comprehensive policy for a Green New Deal to tackle the climate crisis. It’s been ruled out of order on spurious grounds. Appalling decision by Labour leadership https://t.co/BILsxlHPlM

Since we founded the organisation in March 2019, a core aim has been bringing together both the labour movement and climate activists around a shared vision and policy platform, with the Labour Party as the vehicle for that unity. We have constructed motions designed to maximise support from all wings of the party and our movements so that we can build from what we agree on rather than getting bogged down in where we differ.

It is true, and no secret, that we are proudly socialist. We believe that capitalism is the root cause of the climate crisis and economic justice, and that socialist transformations of the economy are necessary preconditions for decarbonisation and eliminating inequality. But we also believe that any movement for climate and economic justice must maintain a broad base. We are an open organisation which empowers new activists to take responsibility rather than relying on the same old cliques. We engage in dialogue with MPs, trade unions and climate groups across the political spectrum.

We have played our part in reaching across our movements to develop a compelling and popular platform that can convince a majority of voters to put their trust in Labour to form a government. For these reasons, the bureaucratic blockage of our motion can only be seen as a repudiation of a politics of unity and consensus. Instead, the Labour Party machine chooses self-defeating factionalism and political vapidity.

Keir Starmer and his General Secretary, David Evans, now have two options. The first, which they should take, would be to overturn CAC’s decision. With this path, they can begin to re-engage members, facilitate lively democratic debate, and maintain a party capable of winning elections. The second, which seems to be more in character, would be to ignore this decision and leave opaque committees to conduct their dirty work. It would contribute to further alienating a generation for whom climate justice is a priority and the Green New Deal a ray of hope. The former gives Starmer’s Labour a fighting chance. The latter is a shot in both feet.

Linkedin
RELATED ARTICLES
OTHER ARTICLES
Photographer David Corio’s archive offers a glimpse inside a revolutionary era of music and nightlife.
As the Scottish government announces a rent freeze, an activist with Living Rent who fought and won shares how they did it, and what must come next.
Thousands attended the annual event this year to wheelie through the city and call for ‘knives down, bikes up’.
With skyrocketing rents, packed out viewings, bidding wars and more, renting in London has never been harder.
Cindy Campbell recounts how her brother ushered in a new era of musical culture at a party she held in the Bronx in ‘70s.
Following the announcement of an 80% hike in the energy price cap from 1st October, crowds gathered outside the offices of energy regulator Ofgem to protest and declare their intention to undertake a payment strike.