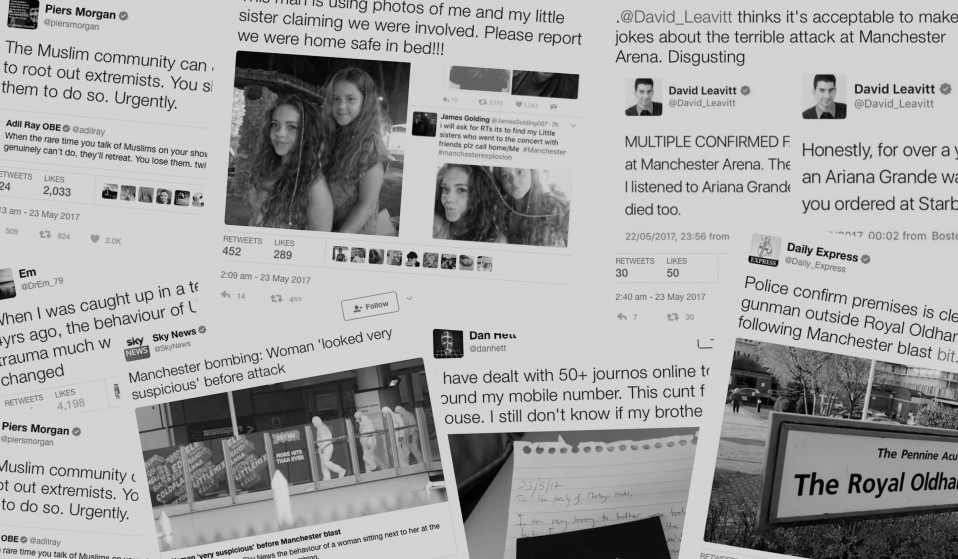 Over the past 24 hours journalists have spread bigotry, invaded privacy, and failed miserably to show any sign of humanity or respect.

In the wake of a terror attack the media has a responsibility to inform us, but over the past 24 hours journalists have spread bigotry, invaded privacy, and failed miserably to show any sign of humanity or respect.

Over the past few years, acts of terrorism (as well as the subsequent ‘War on Terror’) have led to death, destruction and despair for millions of people worldwide.

The narrative has become miserably familiar: an act of terrorism takes place and in the hours and days that follow, both news and social media feeds are rife with premature speculation and overt bigotry. Depressingly, although maybe not surprising, a lot of this comes from journalists themselves.

Every large-scale act of terror manages to expose the darkest corners of the media world, and makes me more and more ashamed to be a part of the industry.

Last night, reports that a loud blast during an Ariana Grande concert at Manchester Arena began to filter through social media at around 10.30pm, and media organisations the world over quickly picked up the story. We’ve since learnt that a suicide bomber detonated a device, and currently 19 people have died (with dozens more injured).

While some outlets have tried to put out thoughtful, useful, fully confirmed coverage, many have not. Over the past day, the media’s dirty laundry has been left out for everyone to see.

There are many ways in which the media has already let the public down in the aftermath of this attack, but most stomach turning has been the way some journalists have been so reckless in their desperation to get an early scoop. They’ve been exposed as willing to hound people – with lost, or even dead loved ones – both online and  even in person.

I have dealt with 50+ journos online today. Two found my mobile number. This cunt found my house. I still don't know if my brother is alive. pic.twitter.com/NYbLzBsVH0

Under every panicked Tweet posted looking for missing relatives in Manchester, there are dozens of hacks, mouths-foaming, asking worried friends and family members to contact them ‘to talk’. You’ll find similar requests under Tweets that celebrate the safety of a loved one, posts offering stranded people a place to sleep, and even those looking for a place to take their scared child at midnight.

The tone of these messages is almost always polite, as if barraging recently traumatised people is ok as long as you say ‘please’.

In one deeply insensitive case, a man with a missing brother since the attack posted that two journalists found his phone number, one at the Telegraph put a note through his door, and dozens added him personally on Facebook, all in an attempt to secure a story.

There have also been reports of journalists waiting outside hospitals in Manchester in order to interview newly discharged patients. This would be disgraceful at the best of times, but considering a significant number of people involved will be teenagers or even younger, the lack of care here feels nothing short of criminal.

These children have barely had time to process their own feelings; one BBC News interview with a clearly traumatised teenage girl was so distressing, I had to switch it off.

Then of course there have been premature reports Tweeted out by journalists, even written about in headlines, all in an attempt to secure clickthroughs, tally up Retweets, fuelling a selfish sense of superiority.

“Not confirmed officially” is a phrase no journalist with a large platform should deploy, quotes from audience members about “suspicious women” shouldn’t be headline news, and the Daily Express’ totally false ‘gunman outside Royal Oldham hospital’ report was irresponsible in the extreme.

In the wake of an attack, people need to feel safe going to hospital, not afraid. Professional contrary bigots like Tommy Robinson and Katie Hopkins (who dared to use the phrase “we need a final solution”) have even been trending online.

Alongside this the Daily Mail’s has published graphic images of victims, The Sun has capitalised on the bombing to bring up Jeremy Corbyn’s supposed relationship with the IRA, and a freelance journalist made jokes about the tragedy just an hour after it happened.

.@David_Leavitt thinks it's acceptable to make jokes about the terrible attack at Manchester Arena. Disgusting pic.twitter.com/KWcXE1rhjf

In the coming days, as names and ages of victims and survivors become well known, I am dreading the seemingly inevitable reports of grieving families being essentially stalked by journalists trying to speak to them. The media needs to do better, and more than that, this callous disregard for peoples’ wellbeing needs to stop.

As a journalist, there’s a certain level of invasive behaviour I’ve needed to reconcile myself with doing in order to pay the bills. Asking people personal things, requesting to take photos of their faces or homes, and even researching (and subsequently finding out) things I wouldn’t necessarily know otherwise about their lives.

While I’d like to think I don’t cross the line, there are times when I’ve wondered if what I’m asking or writing about is morally justifiable. The answer, before I publish anything, needs to be ‘yes’, but with online news and features comes the ever increasing need to capture an audience’s attention. Too often this ends up seeing editors desperate to shock.

We need to ask ourselves: is this something the public really needs to know, in this much detail? Once the facts of the Manchester attack are established, who are the thousands of personal accounts really for?

We know that those who commit acts of terror, from gunmen to organised groups, feed off the incessant media cycle that now is part and parcel of any attack. We know that survivors can report feeling deeply traumatised after the coverage is over, as they attempt to go back to their normal lives. We even know that watching hours and hours of graphic coverage isn’t good for our mental health as a society, and leaves us feeling far more vulnerable and afraid than we should be considering how rare terrorist attacks still are. So why do we continue?

Newsrooms need to not just discourage bad, invasive reporting but ban it entirely, and stop sending their employees to help traumatise victims. The media culture we’ve fostered is a toxic one, and its no wonder people the world over find themselves with a deep-seeded hatred of what we do.

In these trying times, good media is needed more than ever – not sensationalist cruel hate that is anything but in the public interest. What we’ve witnessed from our press has been a disgrace.

Linkedin
RELATED ARTICLES
OTHER ARTICLES
After blocking the Scottish government’s gender recognition reform bill, Westminster is now devising further changes to the law to make it harder for trans people to self-identify.
Since 2007, Gideon Mendel has made 20 trips to document floods in 13 countries. The result is an alarming record of what has already been lost to the climate emergency.
AI companies that develop image-generators using copyrighted artwork from the internet are coming under fire from artists who say that it amounts to theft.
Photographer Becky Tyrell went down to the fading banger and stock raceway to meet a community desperate to keep it alive.
As she gears up for the release of her first book, the 24-year-old climate activist talks standing up to authority and building a more inclusive movement.
Photographer Sean Maung reflects on documenting a small town in Pennsylvania afflicted by high levels of unemployment, poverty, violence, crime, and addiction.