News & Politics / Opinion / Why men are experts and women are confessional 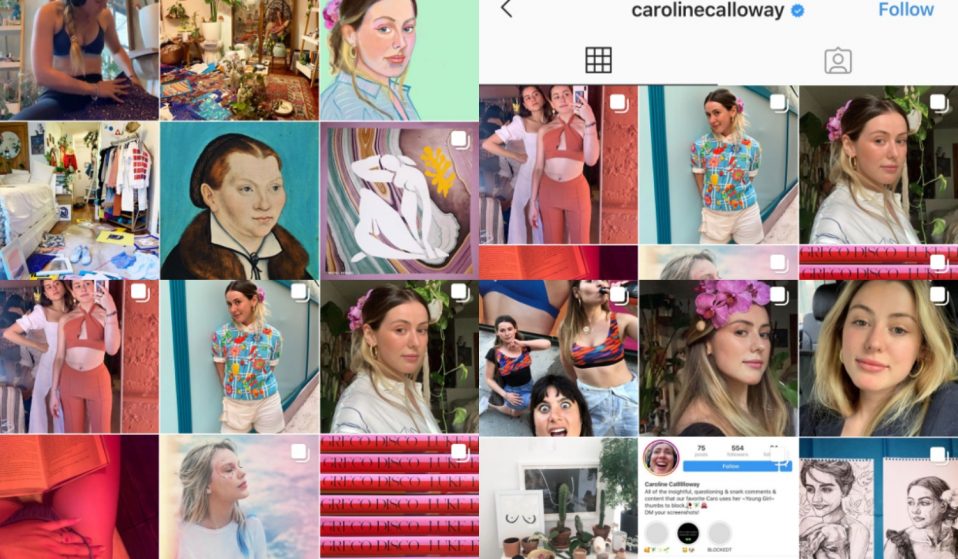 The Caroline Calloway story shows that young women are being forced to plunder their personal lives for content. It’s time we broke the pattern, argues Dawn Foster.

The Caroline Calloway story shows that young women are being forced to plunder their personal lives for content. It’s time we broke the pattern, argues Dawn Foster.

Where are the Yale plates? Along with seemingly half the internet, I read the essay by Natalie Beach on her time ghostwriting for Instagram influencer Caroline Calloway. Calloway had been forewarned of the publication of the piece, and used her Instagram account to criticise it before reading it, stating she had lied about the disappearance of some Yale plates Beach had gifted her because she was young.

The article was pre-hyped, but reading it made me and many others feel uneasy. The public airing of personal gripes about a historical friendship felt deeply intrusive, rubbernecking the private issues of the two women. The growth of Calloway as a brand on Instagram, and the essay Beach published are both artefacts in a media that treats young women very differently to everyone else: approaching editors, young women are often expected to plunder their personal life when writing. Starting out, many women (myself included) are asked what personal link they have to the subject they have pitched. Men pitching do not find the same issue, finding their pitches accepted or rejected without being asked if they have experienced the issues they wish to write on. Men are taken as experts: young women are expected to be confessional.

The essay aired many of Beach’s grievances with Calloway. Both seemed to have suffered differently in the years they were friends. The class difference between Beach and Calloway was clear: Beach’s attempts to succeed as a writer were scuppered by troubles with cash and not having a family who could bail her out when she found herself homeless. Calloway had a safety net of cash from her family, but clearly suffered when studying at Cambridge, hiding her reality from her Instagram followers.

Influencers and public figures are expected to share their lives with their public, with their entire existence treated as a commodity to be consumed. We feel we know influencers we follow, knowing that the images and stories told are carefully chosen and constructed. A huge number are young women, and it remains a new field and style. Their public life is treated as a genuine creation, offered to the public for consumption. We know the constructed lives are fake, and only recently subject to laws on advertising. Finding out that Calloway may have created a false appearance and story of her life is not remotely surprising.

Reading about the fall out of their friendship feeds that hunger for conflict: Natalie clearly suffered in the years the pair were friends and felt she had been wronged, and was treated poorly by everyone she met. The media still treats young women as childlike, and expects us to write about our lives, toss away our privacy, and plunder our experiences for writing material. Many editors trust us only to write about ourselves, whereas men can write about anything they fancy, rarely quizzed on the origin of their purported expertise. Women are treated as capable of gossip and writing about their personal experiences and little else.

The catastrophic fallout of their relationship has been consumed with glee after weeks of Calloway trailing the supposed betrayal on Instagram. Finishing the essay, the only feeling I experienced was a persistent hope that both women found help and happiness. The media will continue to watch Calloway closely, and hopefully Beach can find more outlets to write in, and submit articles that aren’t about her life and experiences. Some of the response to the clamour has been misogynist in its approach. Both are treated as fools for their behaviour and decisions, and the public betrayal has been infantilised. It is not remotely edifying to read and watch, but it is also not surprising: it remains a story of a media that fully consumes women and chews them up before spitting them out. The pair have both suffered greatly: hopefully they can be helped, albeit privately.

Linkedin
RELATED ARTICLES
OTHER ARTICLES
Rhiannon Adam spent three months capturing an ageing society wracked by division, isolation, and the aftermath of scandal.
Photographer David Corio’s archive offers a glimpse inside a revolutionary era of music and nightlife.
Birdy Chu reflects on documenting the historic moment in which the territory was formally passed back from the UK to China.
The two-day long event returned to London this year, showcasing a spectacular parade, steel bands and Caribbean food.
Yesterday thousands gathered outside Buckingham Palace after news of the Queen’s death broke.
Following the announcement of an 80% hike in the energy price cap from 1st October, crowds gathered outside the offices of energy regulator Ofgem to protest and declare their intention to undertake a payment strike.