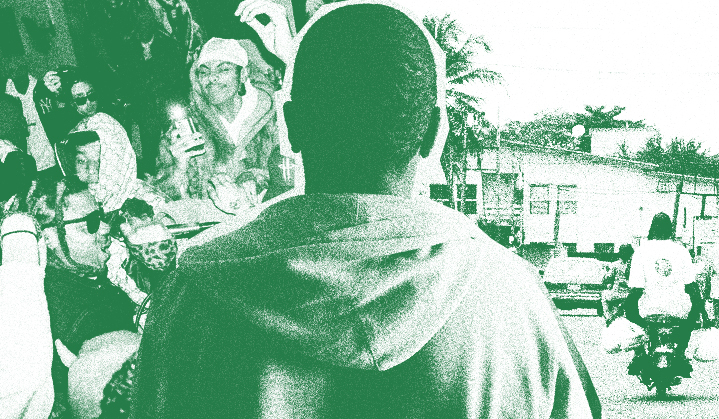 It’s been six years since homosexuality was effectively criminalised in Nigeria. Despite this, LGBTQ people in the country are still finding ways to meet, hook up and have fun.

It’s been six years since homosexuality was effectively criminalised in Nigeria. Despite this, LGBTQ people in the country are still finding ways to meet, hook up and have fun.

Behind the wooden door of a building that at first glance looks no more than a bungalow, Club Genesis* is alive. Inside the venue, situated somewhere in Lagos’ upper-class Victoria Island, the lights flicker from a warm yellow to a bright blue. On the dancefloor, men are grinding against one another and sloppily kissing.

Club Genesis is one of the few venues that make up Lagos’ LGBTQ nightlife scene. For many patrons, it’s the first time they’ve been in a public space that affirms them; where they can exist without the fear of being arrested or harassed.

The club reopened last year, after being forced to close in response to Nigeria’s 2014 Same-Sex Marriage Prohibition Act (SSMPA).  As well as banning same-sex marriages, the act also criminalised a significant portion of queer existence, including any advocacy of LGBTQ rights. In Northern Nigeria, under the Sharia Law, these offences can lead to capital punishment. In Southern Nigeria, you can be landed with a 14-year prison term.

The SSMPA also imposes a 10-year prison sentence on anyone who registers or participates in gay clubs or organisations, as well anyone who shows support for the activities of such organisations. It is this section of the act that led to the arrest of 47 gay men in a hotel last year (their trial is still ongoing). After the bill was passed, any venues that had large LGBTQ customer bases were targeted, raided by the police, and shut down. Club Genesis was one of them.

‘‘My friend invited me here for my first time, and it was so lively and bubbling,” remembers Abdul*, a doctor and a Club Genesis regular. “It’s still lively now, but we have to make compromises. Now people have to be more careful because there’s an actual law against us. Falling down the cracks of the Nigerian justice system is not something I would even wish on my stepmother.’’

Club Genesis re-opened in 2019. However, in order to do so, the name had to be changed and the decor upgraded. It also couldn’t openly brand itself as LGBTQ, as it had done before. To successfully exist and thrive as a business in Nigeria without running the risk of being shut down, Club Genesis and other clubs have to hide in plain sight: rather than exist underground with a secret handshake or password, these clubs remain public and open to everyone. No one can be turned away (though straight people often end up leaving when they realise the venue is mostly filled with men kissing other men).

“The owner is really close to the queer community and all of us used to come here before it got shut down in 2015,’’ explains Raphael*, a Club Genesis regular. ‘‘Once we heard it was back after so long, naturally we all migrated back.’’

These aren’t the only spaces available for Nigeria’s LGBTQ community. Since the introduction of the SSMPA, private queer house parties have also been on the rise. The numbers of attendees at these events fall anywhere from about a dozen to 60 people, with the hosts carefully inviting those they know and trust.

Jordan* regularly hosts queer house parties, with many taking place at Airbnbs and friend’s houses. I attend one at his apartment in Lekki, an upscale residential peninsula on Lagos Island. ‘‘We only invite people we know,’’ Jordan tells me, waving his hand at the two dozen people in attendance. ‘‘Everyone here is someone that either knows me or knows my two fellow organisers. That way, we are confident that it’s a queer person and not a kito or snitch or something like that.’’

At the party, Jordan goes to check the door often, carefully vetting and ensuring that each arriving guest is who they claim to be. It’s a long process, but a necessary one: he can’t hire security guards without risking the event being reported to the police. He also knows that if any violence breaks out, then it can’t be reported – in the eyes of the Nigerian law, homosexuality is a much worse crime.

What the future holds for Jordan – and for the rest of Nigeria’s LGBTQ community – is unclear.“I really just need a place where me, and people like me, can kick back and have fun without having to be among straight people,” he says, finally. “If Nigeria was a saner country, I would have definitely just owned a club.’’

For queer people across the world, there has always been a desire to come together. To be with one another, and be true to ourselves. As a new wave of anti-homosexuality laws and sentiments sweeps the globe, in places like Lagos it’s becoming harder and more dangerous than ever before. But if Club Genesis, and the house parties sprouting up across the city prove anything, it’s that hope, friendship and love will always find a way.

*Names of people and places have been changed.

Linkedin
RELATED ARTICLES
OTHER ARTICLES
Photographer Sean Maung reflects on documenting a small town in Pennsylvania afflicted by high levels of unemployment, poverty, violence, crime, and addiction.
The pro skateboarder withdrew from the 2020 Olympic Games so he could come out as trans. Now, he’s hoping to encourage others to live as their authentic selves – within the sport and beyond.
Taking us through one of the most dynamic years in recent history, Laylah Amatullah Barrayn new photo book contains tender yet confrontational portraits.
A new podcast is opening up the conversation between trans women and trans amorous men in the hope of building coalitions.
A group of aid workers face prison for helping to save people fleeing their homes at sea. If they are charged, it will have a chilling effect on humanitarian efforts.
A new film from Berghaus traces the story of Adam Raja, who left behind a turbulent upbringing to discover the healing power of climbing.