Art & Culture / Alison Rumfitt on her darkly-comic tale about transphobia 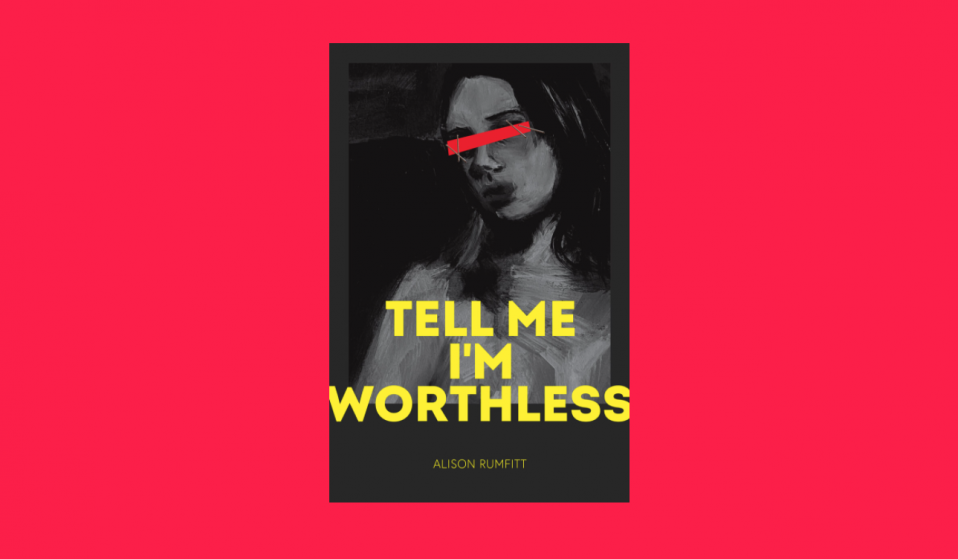 The author talks to writer James Greig about her debut novel – a sharply-observed satire meets horror about the modern-day trans experience and the insidious creep of fascism.

The author talks to writer James Greig about her debut novel – a sharply-observed satire meets horror about the modern-day trans experience and the insidious creep of fascism.

Alice, the protagonist of Alison Rumfitt’s debut novel Tell Me I’m Worthless, is haunted by a curious phantom. Every night, the disgraced frontman of a 1980s indie band (unnamed but unmistakable) crawls out from the poster which confines him and stands over Alice’s bed, his eyes blacked out with biro and radiating malevolent intent. If the idea of someone being haunted by an evil Morrissey poster sounds funny, that’s because it’s intended to be – but as the novel progresses, it becomes genuinely creepy, too.

It’s a satire that’s actually funny and a horror novel that’s actually scary. To blend genre without one aspect diminishing the other is a difficult feat to pull off, and made more impressive by the fact that, after beginning her career as a poet, this is Rumfitt’s debut novel.

Tell Me I’m Worthless concerns the wreckage of a friendship between two characters – Alice and Ila – both of whom are hateful at times but ultimately redeemable. Alice is a trans woman who scrapes a living through online sex work and drifts through Brighton’s house party scene. As a first-person narrator, she is bitter and acerbic, prone to erudite digressions on the nature of fascism and the conventions of the ghost story genre. Ila, meanwhile, has become a committed ‘gender critical’ activist: she attends meetings, appears on Radio 4 to discuss the importance of single-sex spaces, and boasts a number of anti-trans celebrities as followers on Twitter. The sections of the book which concern Ila’s journey through the world of anti-trans activism make for a lacerating, sharply-observed satire.

But this is, above all, a horror novel, and a haunted house looms large. Three years before the story begins, Alice and Illa (along with their friend Hannah, now missing) spent an evening in a decrepit mansion on the outskirts of the city, where they experienced a brutally violent incident. The house functions as a metaphor for a particularly English form of fascism, and exerts a Mephistophelian influence on the characters; it whispers in their ears, appealing to their worst impulses and most reactionary anxieties, doing everything in its power to lure them to return. When it eventually succeeds, the novel reaches an explosive climax.

There have been some excellent non-fiction books published about the trans experience recently: for instance, The Transgender Issue by Shon Faye and Transgender Marxism, edited by Jules Joanne Gleeson and Elle O’Rourke. Tell Me I’m Worthless refracts similar themes, but through the lens of horror and pitch-black comedy. It’s an at times transgressive, hallucinatory, and frenetic novel, but one which is nonetheless lucid in its treatment of its themes: the resurgent threat of fascism, the absurdities inherent to contemporary transphobia, and the way that trauma, rather than being a learning opportunity, can make people twisted and cruel. I caught up with Rumfitt to find out more about the novel.

Why did you decide to have Morrissey as one of the spectral presences in the book?

It honestly just started as a joke. I had a friend a couple years ago who had a Smiths poster on the wall of his room, and it always weirded me out that it was there, but I never really brought it up. When it came to writing the book, I was trying to think of something that could tell you a lot about the blind spots in someone’s politics, and ways to signal, fairly early on, that Alice isn’t someone that the audience should be trusting. It’s less that she’s clueless about what the poster says about her and more that she doesn’t care, and hopefully, that signals to the reader that while they might sympathise with this person, they shouldn’t go with her all the way.

There’s a tendency today for people to interpret characters in novels as direct stand-ins for the author (take the transphobic backlash to Detransition, Baby, for example, where lines of dialogue from Reese, the fictional character, were frequently attributed to Torrey Peters, the author). Are you concerned about being misinterpreted in that way?

There are bits in the novel where, if you took them out of context, would make me look bad. There’s one section where that is a very real danger. But I think that the formatting hopefully means that it can’t be taken out of context. I would hope that it’s pretty clear, if you read the novel, that my perspective is that Alice is wrong and has some abhorrent views.

It seemed to me that the book is partly about why fascism is seductive to some people. If fascism does have an appeal, what do you think the nature of that appeal is?

There’s one example I actually included in the book: I was at some university event with a group of left-people and there was a Trotskyist guy there arguing that the 2011 London riots were innately bad. It made me angry because it was such an annoying view for a left-wing person to have, and such a specifically white view – not understanding why that unrest was happening at all and purely foregrounding community order over understandable retaliation.

At the beginning of the novel, Ila is viciously transphobic – but despite this, she’s not an entirely unsympathetic character. What was it like writing from a ‘gender critical’ perspective in a way that wasn’t purely condemnatory?

As difficult to believe as it might sound, it was fun. It was like setting a challenge for myself: when I realised that I wanted one of the primary characters to be gender-critical, it was then enjoyable to think about the thought patterns that they might have and the little jokes that I could put in as someone who has spent far too much time learning about these people.

And Ila is an outsider, even among gender criticals. She struggles to relate to their positions about trans people compared to her own, because for them it’s just an academic exercise or something they’ve read about in the paper. It was just a lot of fun to consider that perspective, even if it wasn’t easy to inhabit such a different worldview to my own.

While the house embodies the spirit of fascism, it’s also literally a haunted house – it’s not just all in their heads or a matter of them having to defeat the fascism within them.  How were you thinking about balancing the metaphorical and the literal?

If it was just a metaphor, then personally I wouldn’t be interested in the novel. If I was reading a book and it was revealed at the end that the haunted house wasn’t actually haunted, I would feel cheated. I actually added a fair amount in the rewrites to flesh out what the house actually is, and to give some form of explanation as to the nature of it. That ended up being informed by the fact that I really love William Blake. I think Blake is a really interesting framework in which to explore these tensions, because his work – especially the poem ‘Jerusalem’ – is often used by right-wing people, but he himself was not right-wing at all.  His paintings are also terrifying, which meant that invoking them was a great way of creating scary imagery.

Throughout the novel, there are a number of passages of stream-of-consciousness writing. What kind of influences were you thinking about while writing these sections?

Until I started writing this novel, poetry was the form that I wrote in, and my poetry was often written in that frenzied, stream-of-consciousness style. As I was writing the book, my influences on those sections were modernist poetry, which is another interesting example of art that is beloved by left-wing people but which is often kind of fascist. I was also influenced by poets that I’ve come into contact with as part of the UK experimental poetry scene – including my friends, Nat Raha and Verity Spott who are two amazing trans poets. And also Callie Gardner, who was amazing and unfortunately passed away this year, and was the first person to publish an extended bit of writing by me. It was interesting to bring that style of poetry into a horror novel, because I think it’s inherently quite horrific.

It’s in many ways an ominous and pessimistic novel, but I thought it ended on a hopeful note. Why did you decide to do that?

I’m actually not sure that it does end hopefully.

Maybe ‘hopeful’ isn’t the right word – it ends with a tragic event – but the final image does suggest some sense of resilience or defiance.

I think if the novel ended on a purely horrible note, I’m not sure it would feel like it was worth it. I got to the point where I actually didn’t want to see these people suffer anymore. It was more for me: I realised I wanted things to be not totally OK, but a little bit OK. What the novel portends is the potential for ongoing destruction and danger: in my head, what happens at the end is just the first of many such terrible events. But it became clear during the rewrites that I wanted to have some kind of reconciliation, some moment of levity.

Tell Me I’m Worthless is out now on Cipher Press.

Linkedin
RELATED ARTICLES
OTHER ARTICLES
Rogue landlords are exploiting young and inexperienced renters and leaving them in mental and financial turmoil, reports Niall Hignett.
Yesterday thousands gathered outside Buckingham Palace after news of the Queen’s death broke.
In his 2008 series, the photographer pictured himself as Angela Davis, Martin Luther King Jr., Malcolm X, and other prominent figures.
Following the announcement of an 80% hike in the energy price cap from 1st October, crowds gathered outside the offices of energy regulator Ofgem to protest and declare their intention to undertake a payment strike.
For over a decade, gamblers have won big by employing people to place live bets from the court. But does this dubious method still work?
Ahead of the release of their first collaborative album, the producer and rapper talk psychedelics and the state of UK hip hop.