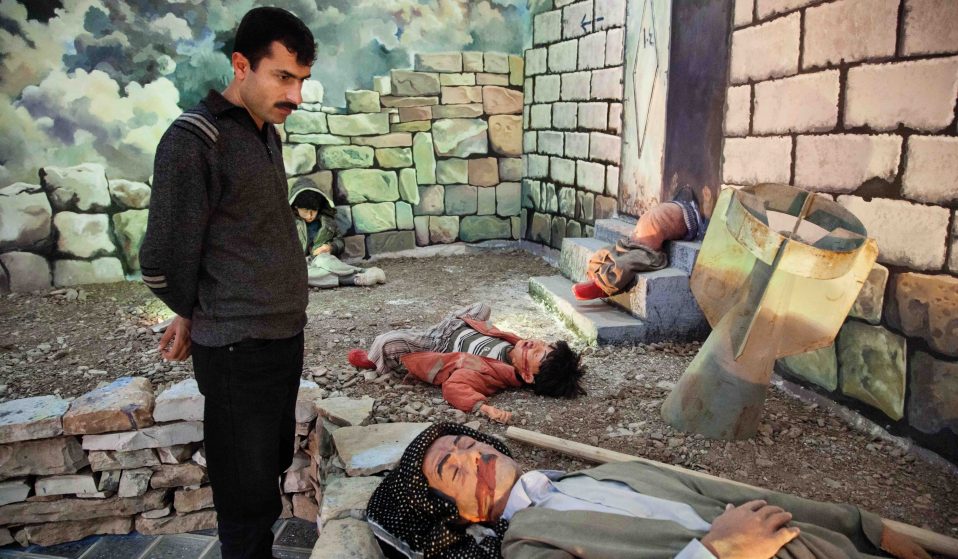 Photojournalist Sebastian Meyer weaves his documentary photography of a conflicted region with his own heartbreaking journey of friendship and loss.

Photojournalist Sebastian Meyer weaves his documentary photography of a conflicted region with his own heartbreaking journey of friendship and loss.

Captured in 2012, the scene shows two young men laughing together, strolling down a hill with cameras swinging from their shoulders. It is a photograph from Sebastian Meyer’s book Under Every Yard of Sky of him and his friend Kamaran, who tragically disappeared two years after it was taken.

Photojournalist Meyer first came to Iraqi Kurdistan in 2008 on assignment for the Kurdistan Memory Program, a multimedia project documenting Kurdish history. His job was to photograph survivors of Saddam Hussein’s Anfal campaign. By then, the US-led coalition had been fighting in Iraq for five years. Yet landing in Erbil expecting to find a full-blown war zone, Meyer says the reality couldn’t have been more different.

“Instead of car bombs, roadblocks and military patrols, I was greeted with sparkling hotels, newly paved roads and bustling markets overflowing with fresh produce and the latest knockoff cellphones,” he says. “Kurdistan was booming.”

“The Kurds, whose homeland spans Iraq, Iran, Turkey and Syria, are the largest ethnic group on earth without a country of their own. The word ‘Kurdistan’ is complicated and loaded. It can refer to the nonexistent but dreamed of pan-Kurdish state, or to Iraqi Kurdistan, which is currently the only autonomous Kurdish territory.” 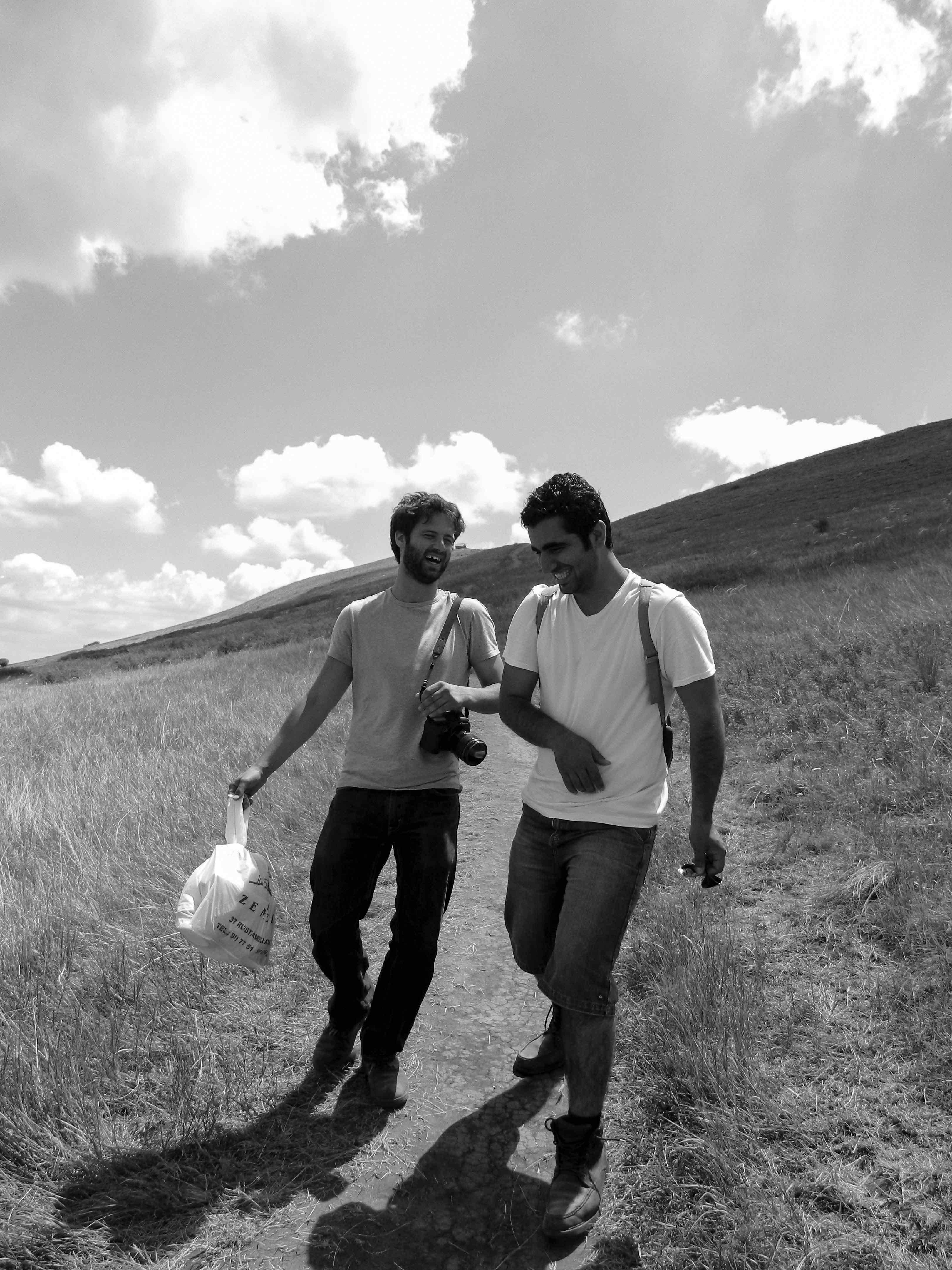 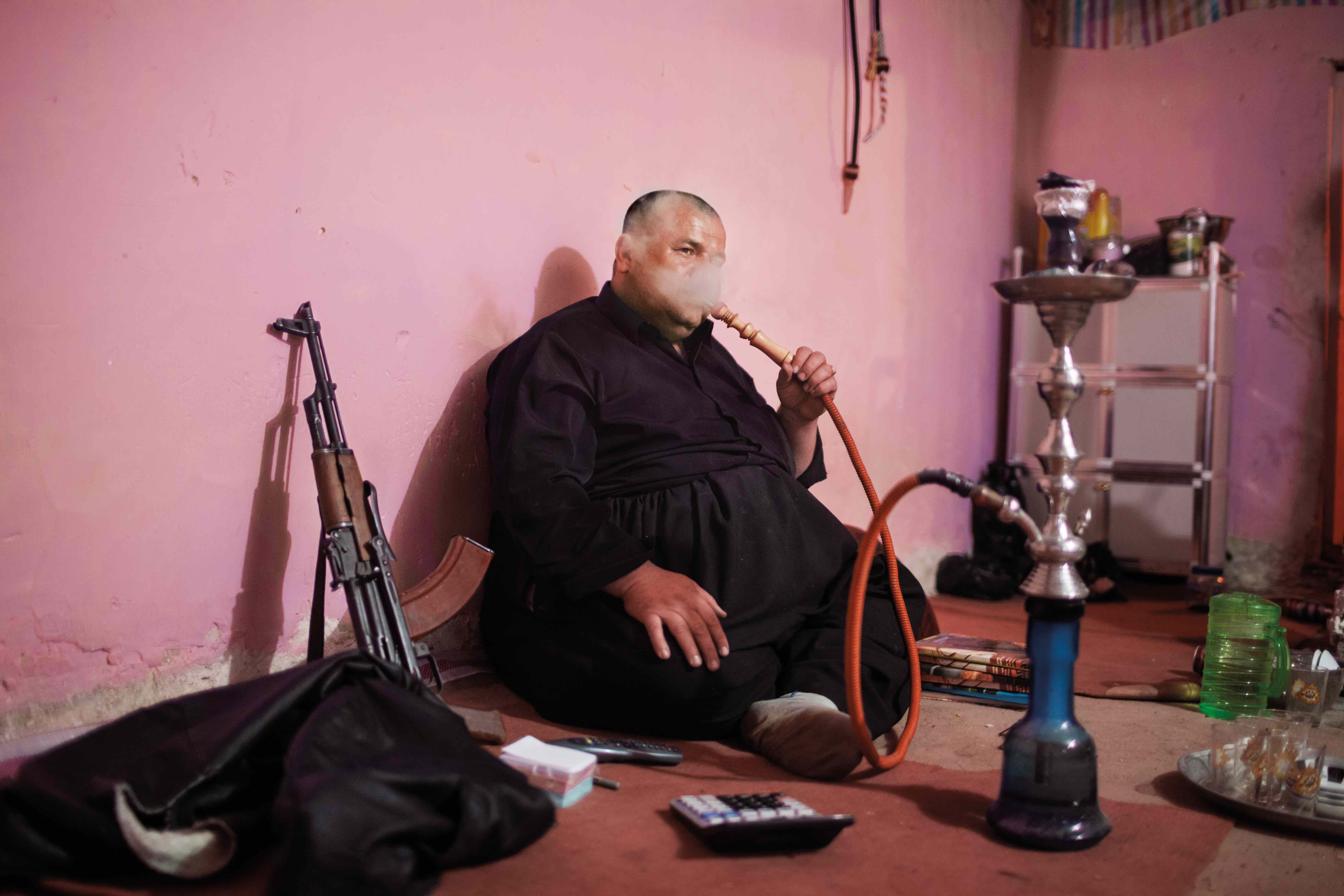 Throughout Meyer’s assignment, the weight of Kurdish identity surfaced time and time again in conversation. Kurdish identity, he learned, was one of immense pride and toughness, but it was simultaneously marked by terrible persecution.

It was during this time that Meyer met Kamaran Najm, who would become a close collaborator and inseparable friend in the years that followed. “We were introduced by mutual friends, who thought that two young, ambitious photojournalists would get along well,” he says. “They were right: from the moment we met, Kamaran and I clicked.”

Together they covered P.K.K. (Kurdistan Workers’ Party) guerrillas, anti-terror raids around Kirkuk, daily life in Baghdad, and an extremist madrassa on the Iranian border. On their days off, they’d tour the region, shooting in remote mountain villages or the dangerous, dusty plains of the disputed territories.

During conversations, Kamaran had lamented how editors in the region were only interested in the sensationalistic aspects of war. “While Kamaran and his colleagues were only asked to shoot instances of extreme violence, foreign photographers – like myself – were being assigned more subtle, in-depth stories,” says Meyer. “Iraq’s nuanced visual record wasn’t being made by Iraqis.” 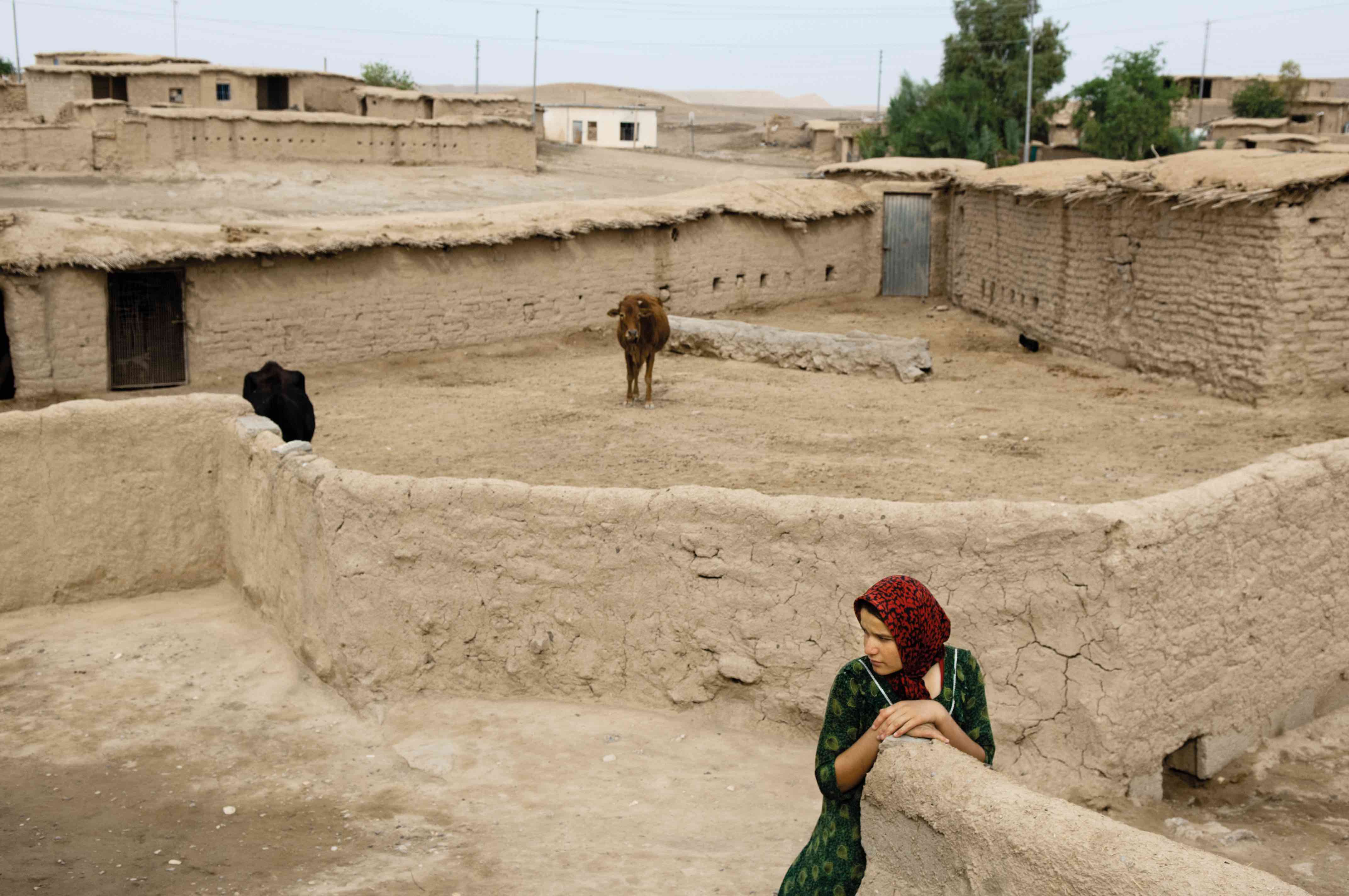 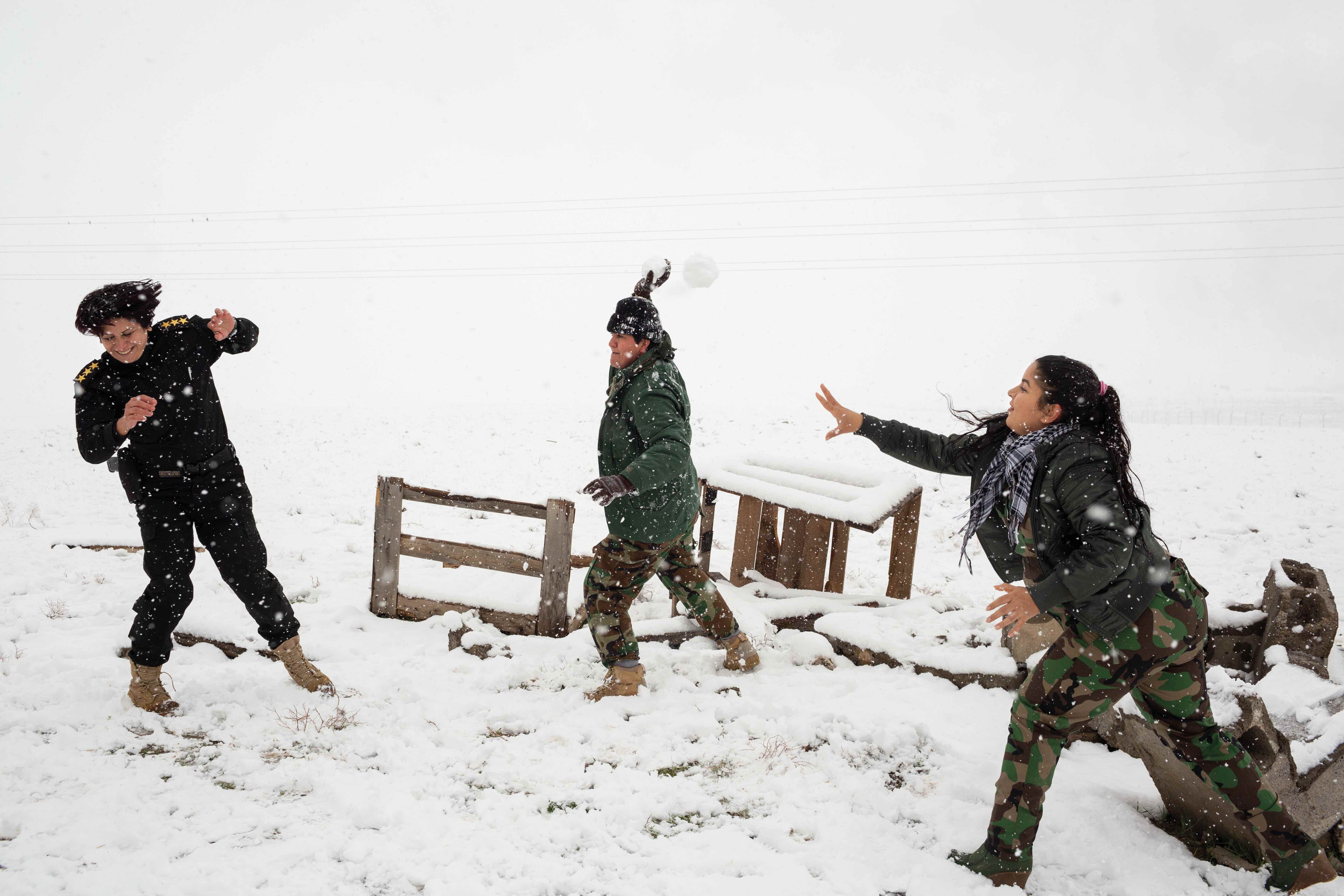 MA’ASKER SALAM, IRAQ: Female peshmergas have a snowball fight on their base, Ma’asker Salam 2015

So it came as no surprise when a year later, Kamaran asked Meyer if he wanted to start a photo agency with him, representing Iraqi photographers. Meyer thought it was a brilliant idea and packed up his life in London to move to Kurdistan and help launch the agency ‘Metrography’. As Kurdistan experienced an economic upsurge, Metrography’s photographers were soon no longer exclusively shooting violence and their bylines began appearing in major international publications.

However, just as things were going well with the agency, Kamaran disappeared. On the morning of June 12, 2014, two days after ISIS overran Mosul, Kamaran headed to Kirkuk, a city in northeastern Iraq, having received a tip that Kurdish forces were launching a counterattack on insurgents south of the city. “As a Kurdish-Iraqi photojournalist, there was no way he was going to miss covering the story,” Meyer says.

Kamaran traced the peshmerga Kurdish fighters from Kirkuk as they closed in on ISIS positions in the village of Mullah Abdullah, but as they approached the village outskirts, the jihadis opened fire with belt-fed machine guns. Kamaran leapt into a dry canal with a group of Kurdish soldiers, including Pazhar Mohammed – another Kurdish photographer.

Although the ditch provided some cover, Kamaran was caught in a round of bullets from an ISIS sniper and was shot in the neck as he peered over the edge. A group of peshmerga soldiers helped Pazhar haul Kamaran out into a pickup truck. But when the driver slammed on the gas, turning the truck uphill in full retreat from ISIS bullets, Kamaran was thrown out the back of the vehicle.

Believing Kamaran to be dead, Meyer and Kamaran’s friends and brothers drove to retrieve his body from the battlefield at dawn the next day.

While there, they received a phone call. Miraculously it was Kamaran’s voice on the end of the line to say he was in Hawija, a Sunni town that ISIS had recently overrun. The jihadis had discovered him on the ground and taken him prisoner.

“The knot around my ribs released; my chest filled with pure light. A moment ago, my friend had been dead. Now he was alive,” Meyer remembers.

But the initial relief was cut short by an ultimatum meant for the commander of the Kurdish forces: if the Kurds tried to attack, they would kill Kamaran. 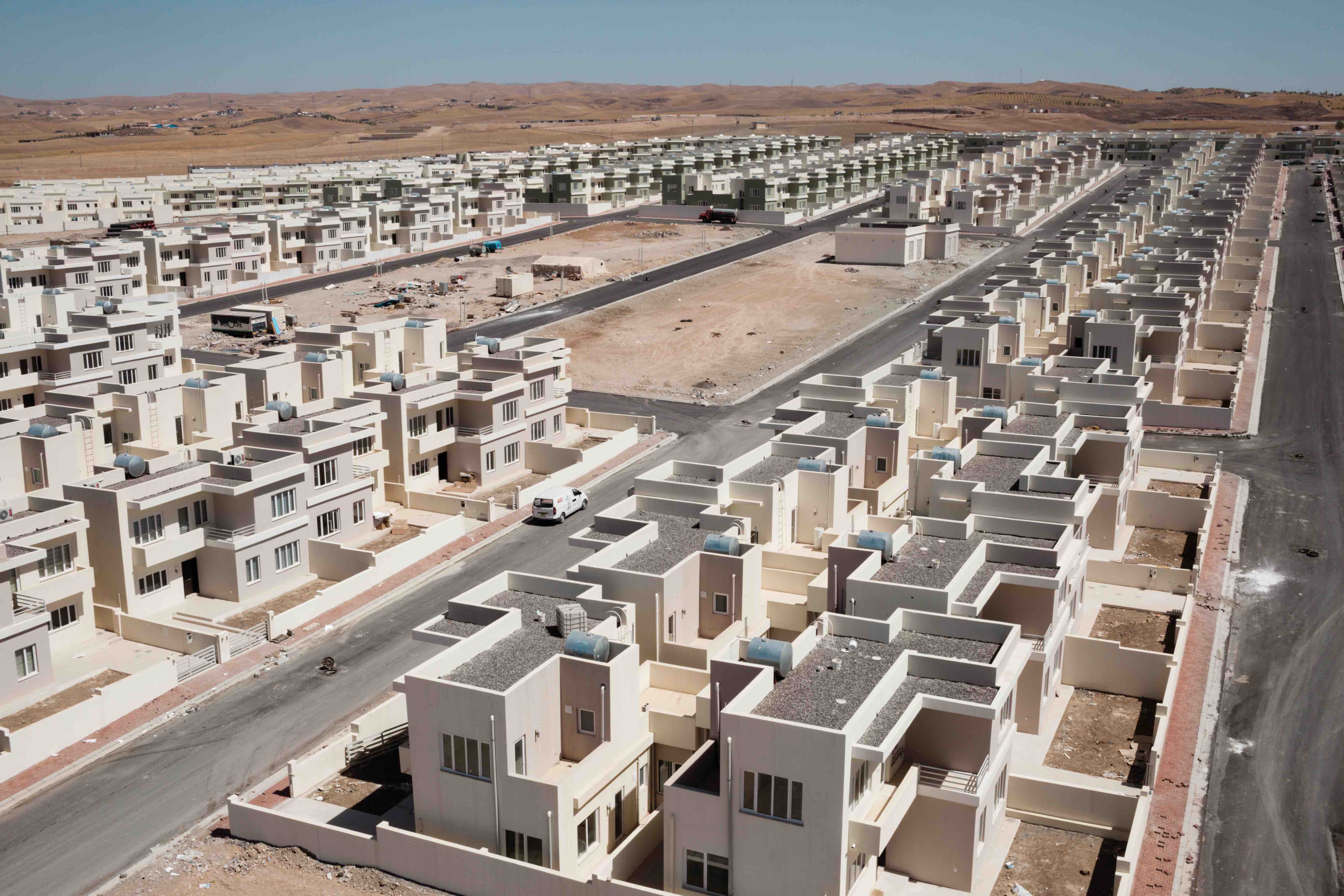 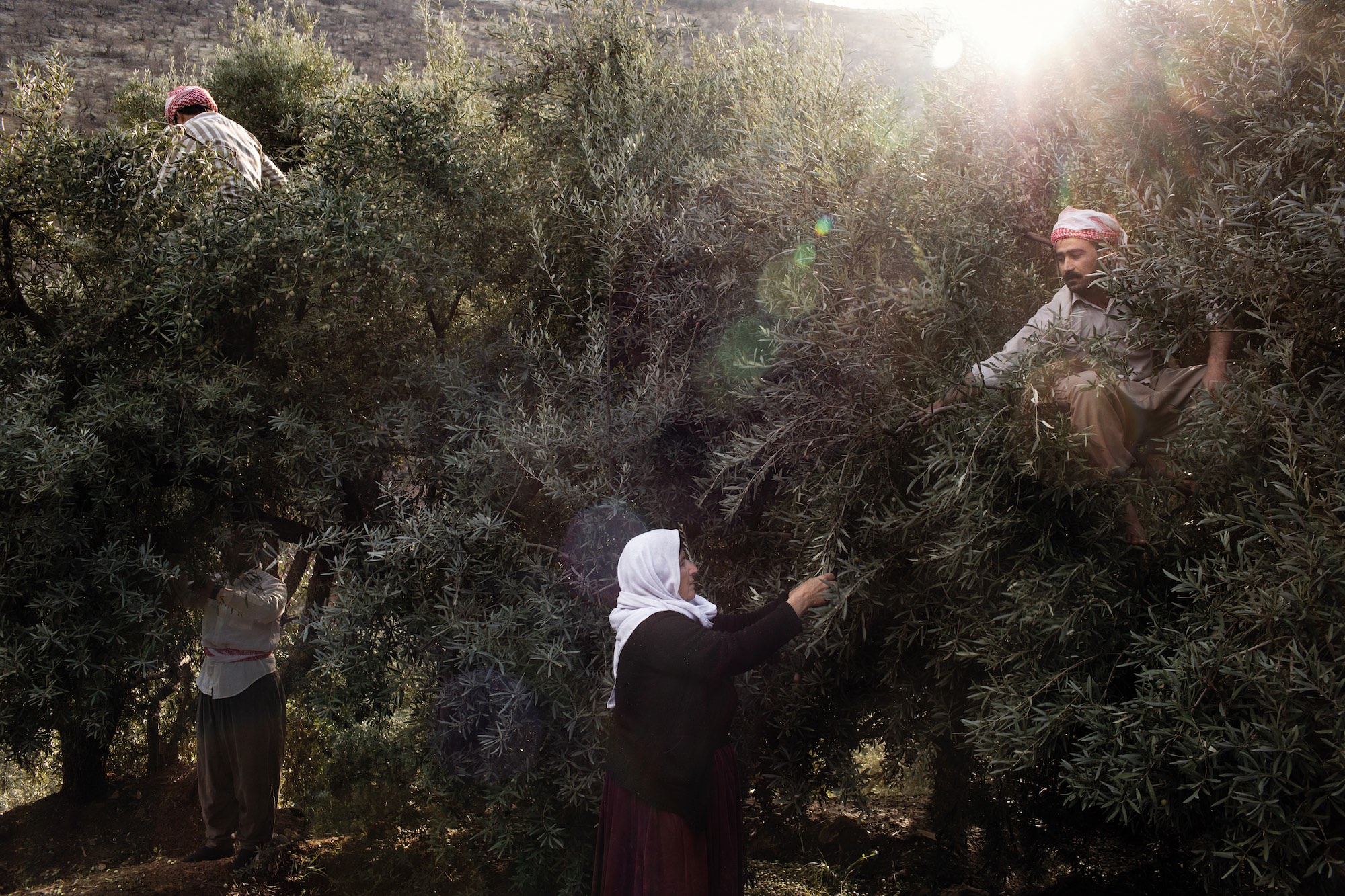 Immediately the group tracked down Kurdish commander Sarhad Qadir, who called the number Kamaran had called from and demanded they let Kamaran go. They refused.

This marked the beginning of what would become an intractable search for Kamaran. “In those first few days, everything we learned was treated as gospel truth,” says Meyer. “We rejoiced over every new piece of information, as if it were a breakthrough moment… I thought that, somehow, the more I wrote, the faster we’d get Kamaran back.”

“By early 2016, all our information placed Kamaran in Mosul. But without a single proof-of-life in 18 months, we were beginning to lose hope… I made my final diary entry on February 9, 2017. It had been almost three years since we’d heard Kamaran’s voice. Despite all the leads, sightings and promises, we were no closer than we’d been in 2014.”

That autumn, they decided to break the media blackout and officially announce his disappearance. Kamaran was most likely dead.

Under Every Yard of Sky spans the 10 years Meyer spent in Iraqi Kurdistan, combining images with a personal account of Meyer’s own friendship and loss, just one in a patchwork of many losses in the tumultuous region.

In the book, Meyer seems to be everywhere at once, taking us into the most unexpected places. A smuggler sits in his den watching TV, exhaling a cloud of smoke from a hookah while a rifle is propped up next to him against a candy-pink wall. We see peshmerga women hurling snowballs and Kurdish policemen massaging each other before an anti-terror night-raid.

Asking how he gained such intimate access to these people’s lives, Meyer credits the amount of time he spent there. “Many of the people in my photographs are my close friends,” he adds.

The title of the book takes a line from Abdulla Pashew’s poem: “over every inch of earth / under every yard of sky / don’t be afraid, bow your head and there set down your crown of flowers.”

“The poem is a meditation not only on the sacrifice of the soldiers and civilians who have disappeared in the struggle for self-determination, but also on the suffering on those left behind,” explains Meyer.

“In the seven years we’d known each other, Kamaran and I had become brothers, our lives entwined. Now his body lies somewhere out there in the dusty plains, and I have no idea where to lay my crown of flowers.” 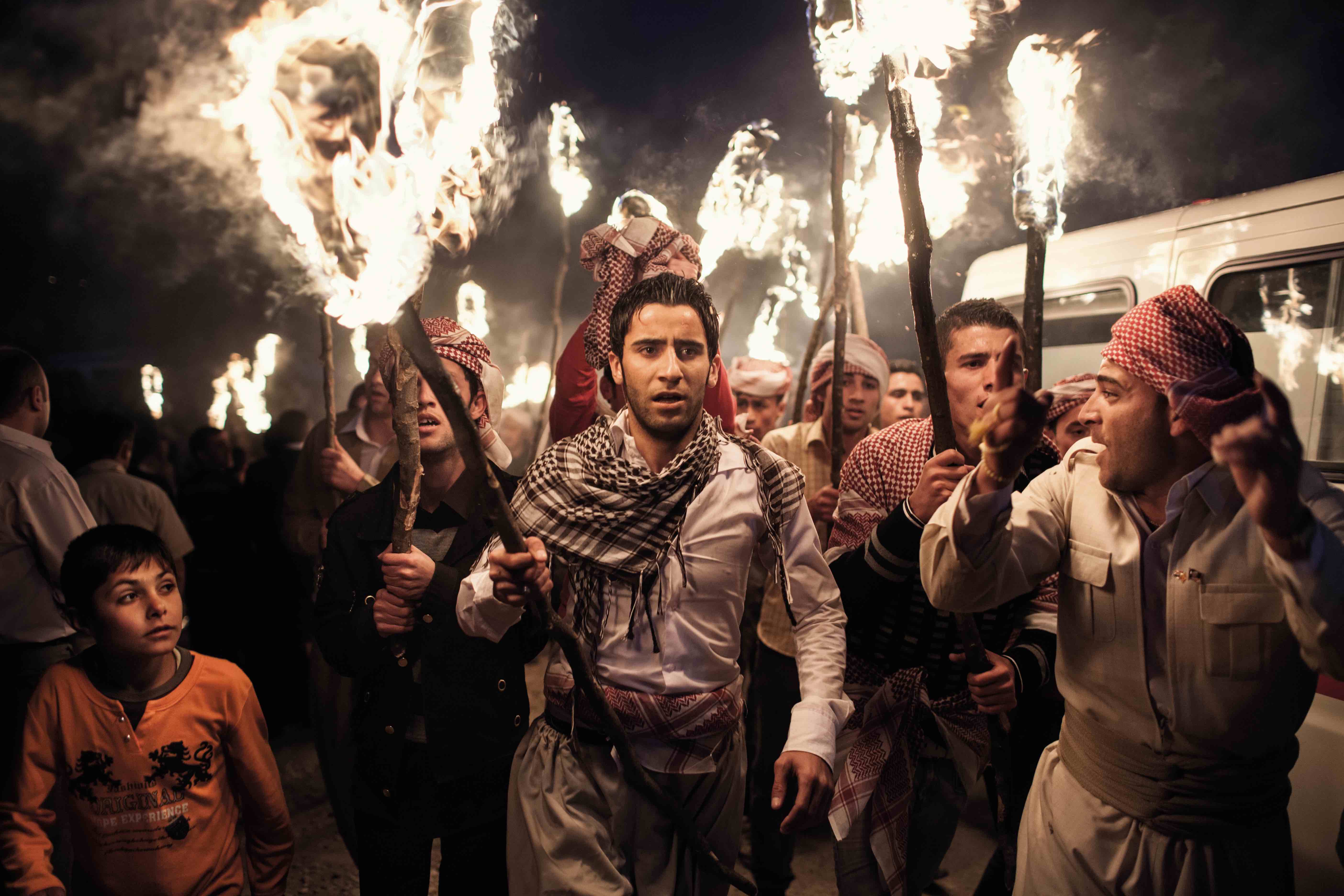 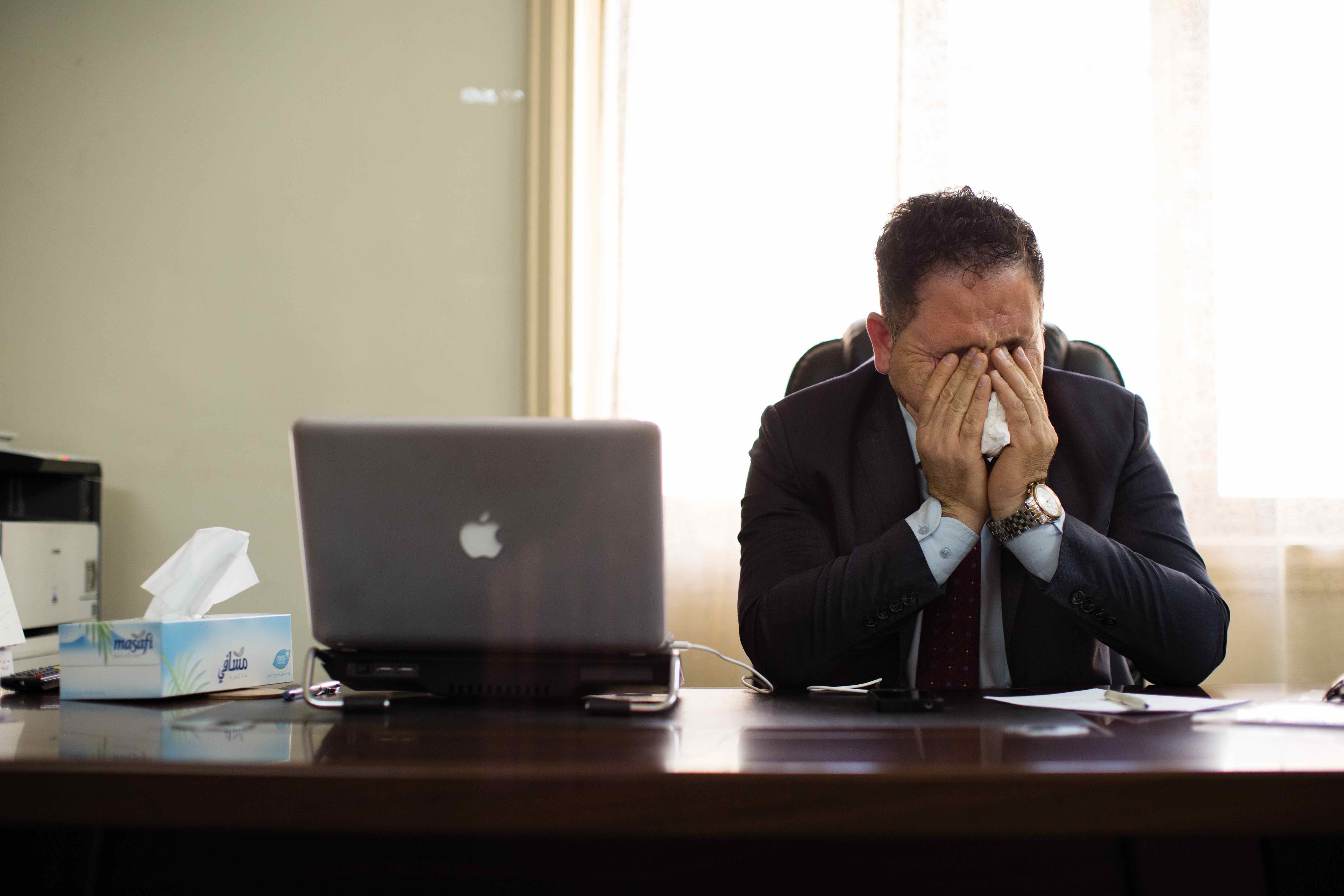 ERBIL, IRAQ: Hazhar cries over his father, a peshmerga who disappeared during the Kurdish Civil War, Erbil 2017 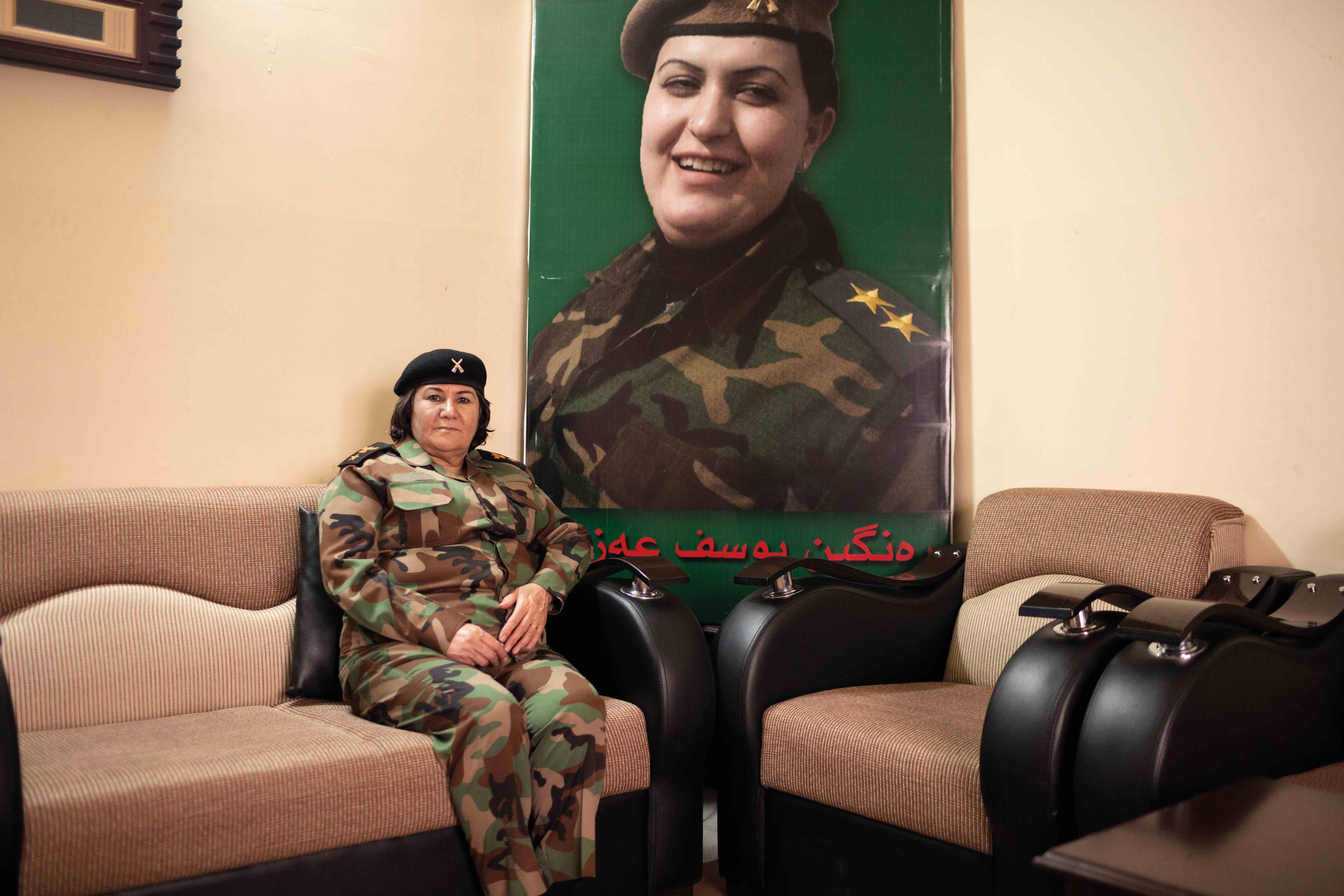 SULAIMANIYAH, IRAQ: Major Nasrin sits in front of a portrait of her daughter, Rangin, who was killed fighting ISIS, Sulaimaniyah 2015 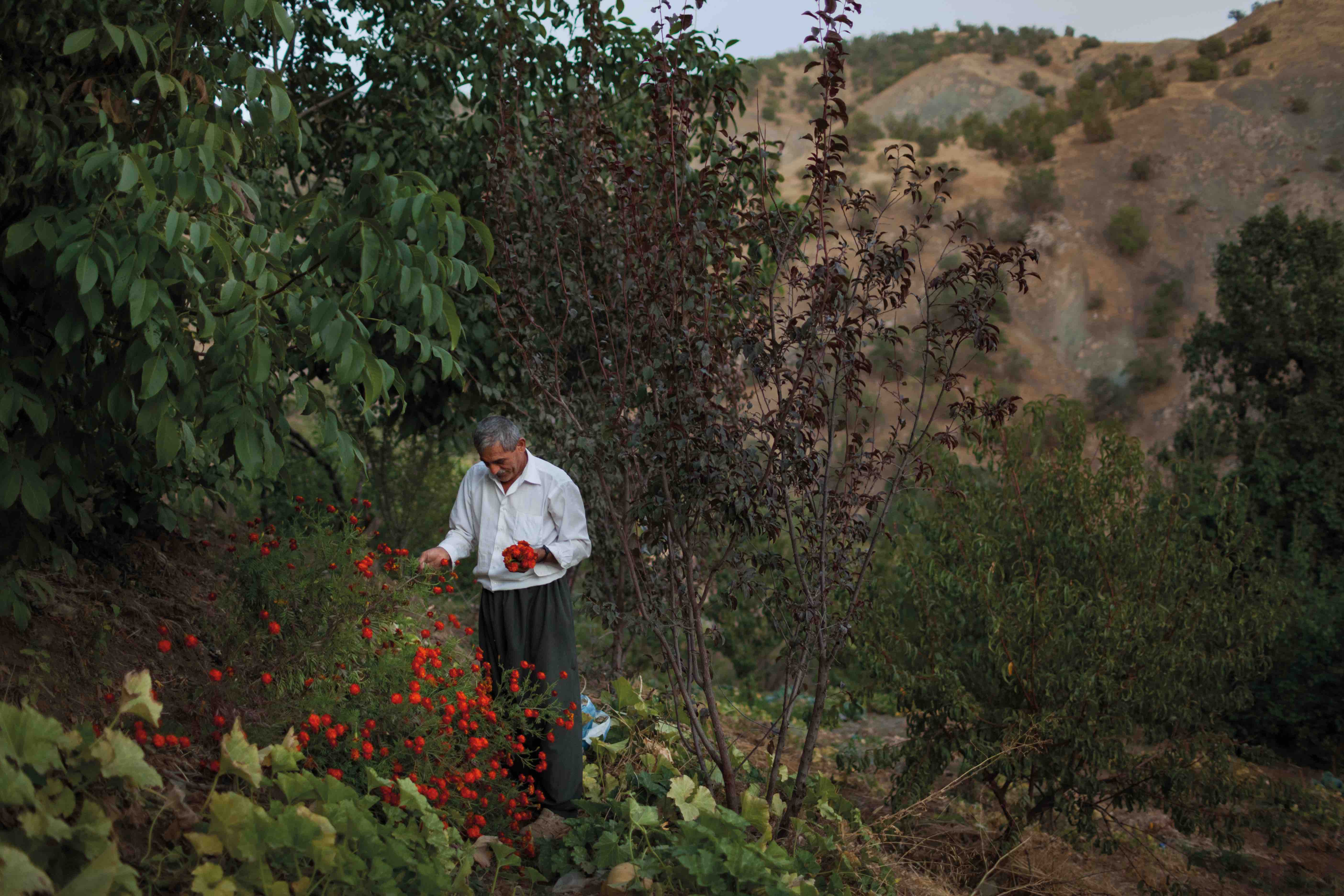 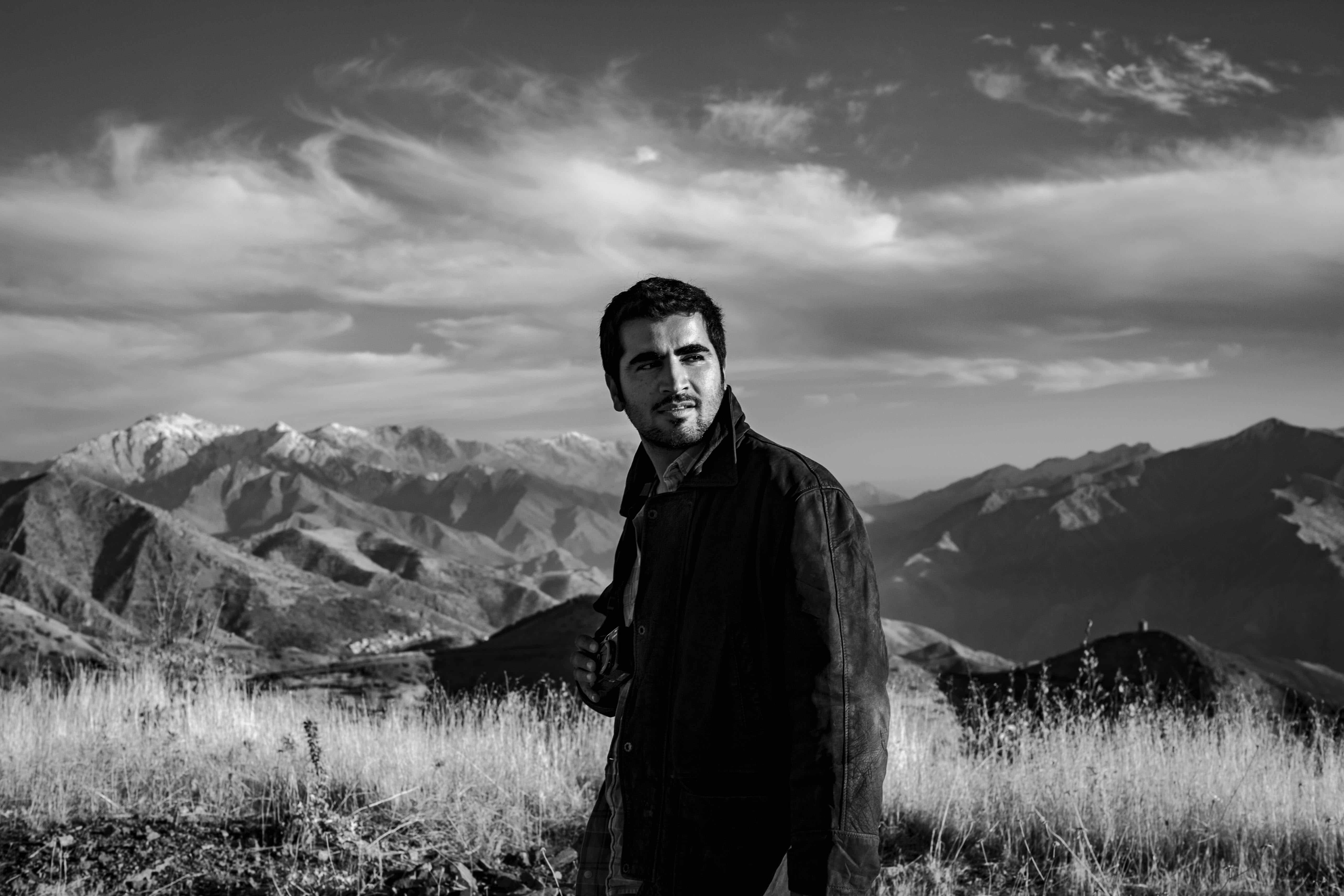 Under Every Yard of Sky is published by Red Hook Editions.

Linkedin
RELATED ARTICLES
OTHER ARTICLES
The curators of a new exhibition are hoping to shed light on Plymouth’s vibrant but often overlooked nightlife.
Finland-born photographer Sirkka-Liisa Konttinen looks back on her decades-long documentation of life in Northern England.
50 years since its inception, and the campaign calling for recognition that capitalism depends on domestic labour is as pertinent as ever.
On the fifth anniversary of the tower fire, around 18,000 joined the walk to remember the 72 dead and to demand justice.
A new report has found that the majority of Britains approach trans issues with compassion. It’s about time this was reflected by our media landscape.
Freddie Miller’s new series of photographs investigates who today’s trainspotters are and what drives their unfettered enthusiasm.