Art & Culture / Alex Webb shares the secrets to his success 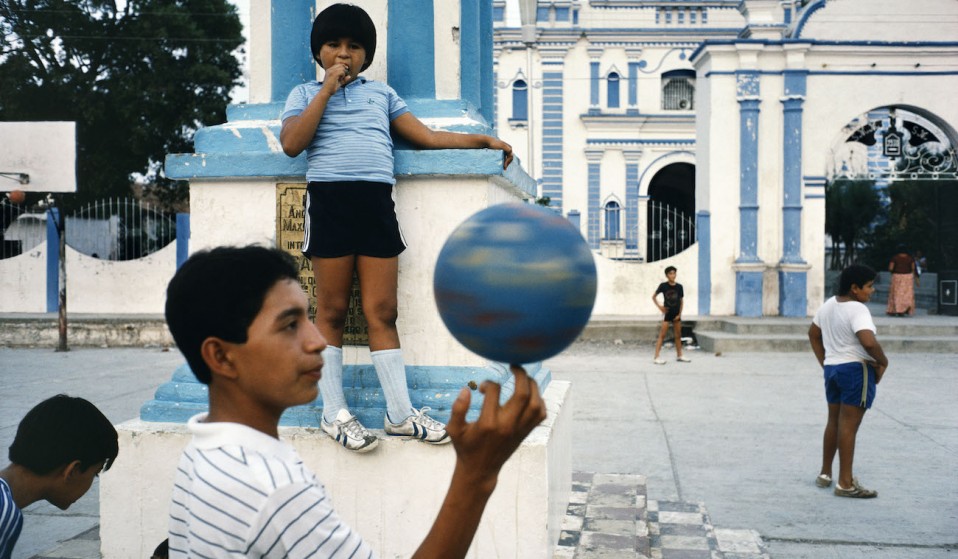 Magnum photographer Alex Webb has travelled the globe, catching cinematic moments that feel timeless. At a rare talk in London, he sheds some light on the secrets of his success.

Magnum photographer Alex Webb has travelled the globe, catching cinematic moments that feel timeless. At a rare talk in London, he sheds some light on the secrets of his success.

“I like pictures that ask questions,” says Alex Webb. “I kind of don’t believe in pictures that provide answers and in many cases I don’t think there are answers.”

He’s speaking at London’s Magnum Print Room – a narrow white space lined with photobooks, drawers and framed images – dressed in a black t-shirt and trousers, sitting by a laptop and a projector.

A crowd of photography fans has gathered to hear the 64-year-old give a rare talk on the nature of his work, in which he shares unpublished material and discusses works-in-progress that may takes years to finish.

There are slideshows – some narrated, some soundtracked by instrumental jams from Jimi Hendrix, Rodrigo y Gabriela and Stevie Ray Vaughan – that guide us through an eclectic but consistent body of work stretching across four decades.

But the real highlight comes at question time. Everyone wants to know a variation of the same thing: how Alex Webb does what he does, nailing vibrant scenes at just the right moment, teasing out layer after layer of detail.

All projects require going with the flow

“Photography is utterly intuitive. You’re stepping out on a journey with no idea where it’s going to end. You just have to think that, somehow, the journey is going to take you somewhere interesting. These things change significantly and I don’t know how long they’re going to take…

With the US-Mexico border, I started working on that in black-and-white in 1975 …and just didn’t want to let go until 2001.

The decision of when a project is finished is a complicated, emotional one. You’re balancing out thoughts like, ‘I think I’m done with that’ and ‘Am I just being lazy?’ Sometimes you push yourself and it doesn’t work. Maybe you have to break through that. Or maybe you’re just repeating yourself.

You don’t know why it happens when a project decides it’s done. It’s almost like it’s not up to me: the pictures decide.”

“I grew up in this environment of intelligent, perceptive people in the New England area and as much as I appreciated that, I felt I had to break that and go somewhere else.

I think that’s what my initial trips to Haiti and Mexico were about: finding significantly different worlds, worlds that upset me and fascinated me, worlds that I found richly full of life and, at at the same time, tragic.

In terms of what I found, they were places where a sense of vibrant colour seems somehow embedded in the culture.”

“The Suffering of Light is my survey of 30 years of work. It makes an effort to bring this obsession that I had of working in colour, initially in the tropics, in between the covers of one single book.

The title comes from [Johann Wolfgang von] Goethe, [who wrote]: ‘Colours are the deeds and sufferings of light.’

I’m not a philosopher or a physicist but my understanding of Goethe’s theory is that he felt colour came out of the tension between light and dark. That seems very appropriate for my work. It’s central to the way I see.”

“I came to photography through books. Initially it was [Henri Cartier-Bresson’s] The Decisive Moment and [Robert Frank’s] The Americans, maybe some Ray Metzker, Lee Friedlander and [William] Klein – but always in book form. I think photography is uniquely suited to it…

Yes, it’s true that certain prints glow in a way they couldn’t possibly in a book. It’s very different from having the physical texture of a painting or the three-dimensional object of a sculpture.

But I like the notion of bodies of work in books; I like the way pictures talk to one another and create other kinds of meaning by their relationship.”

Photography is 99.9 per cent failure

“Every situation is different. Henri Cartier-Bresson used to talk about smelling the possibilities. There’s something interesting there and you don’t know quite what it is: a little shaft of light, a sign, some people over here… but it’s not quite happening.

Maybe you think there’s something there, so you’re hanging out a little bit and – sometimes – something happens. There are some situations where you walk into it and it’s all there.

Most of the time, it’s not. This kind of work is 99.9 per cent failure. A huge amount of stuff gets thrown out.

It’s almost like the word all of a sudden gives you something so different from that which you can imagine.”

La Calle, photographs by Alex Webb from Mexico, 1975-2007, is published by Aperture. Check out this portfolio at Magnum Photos.

Linkedin
RELATED ARTICLES
OTHER ARTICLES
Following the release of his debut single, Deyaz talks battling addiction, dealing with his struggles through music, and building a budding music career from his living room.
After blocking the Scottish government’s gender recognition reform bill, Westminster is now devising further changes to the law to make it harder for trans people to self-identify.
After fleeing the war in Ukraine, people are finding it impossible to secure affordable and decent housing in the UK.
Tristan O’Neill’s shots of dancers caught in moments of reverie at the height of rave’s golden age are a testament to the UK’s legendary club culture.
A new law change is enabling Britain’s donor-conceived children to know the truth about their origins – but campaigners say the fertility industry must do more to protect people.
Social prescribing connects people with non-medical support to improve their health and wellbeing – but some experts worry it’s just a stick plaster solution.