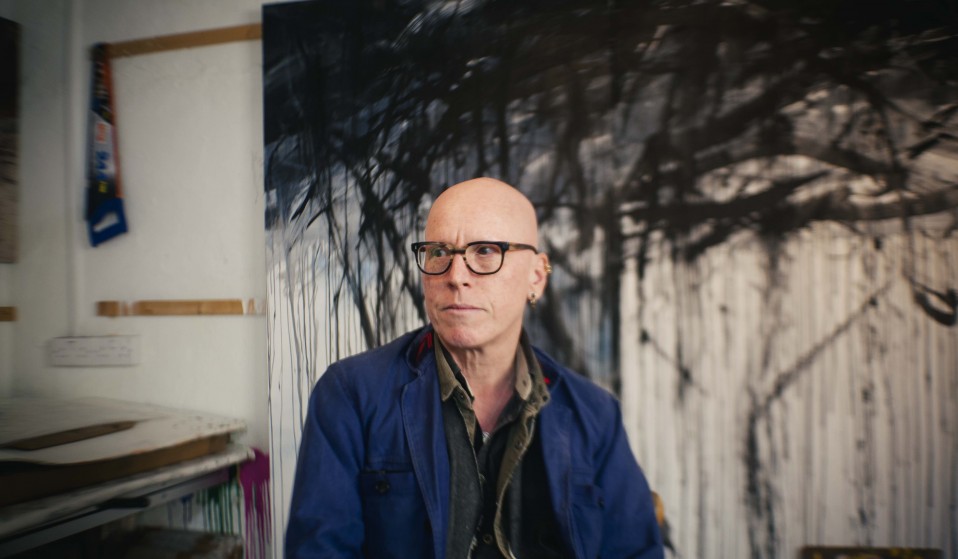 A ball of fire belches into the sky, casting a ghostly orange light over Stanley Donwood’s face. As he gazes upwards, the explosion forms into a rising mushroom cloud.

It’s easy to imagine the world outside this darkened basement has been obliterated by a nuclear apocalypse – but this isn’t a military bunker or a fallout shelter, it’s the United Visual Artists HQ in South London, where Donwood is putting finishing touches to a secretive project, known only as the bomb.

Artist and writer Stanley Donwood is best-known as Glastonbury festival’s artist-in-residence and for his close partnership with Radiohead, having produced all of the band’s iconic artwork since their 1995 breakthrough The Bends. He’s also a longtime anti-nuclear campaigner and the bomb is a terrifyingly immersive installation conceived to push the largely ignored threat of the aggressive use or accidental detonation of nuclear weapons back up the agenda. 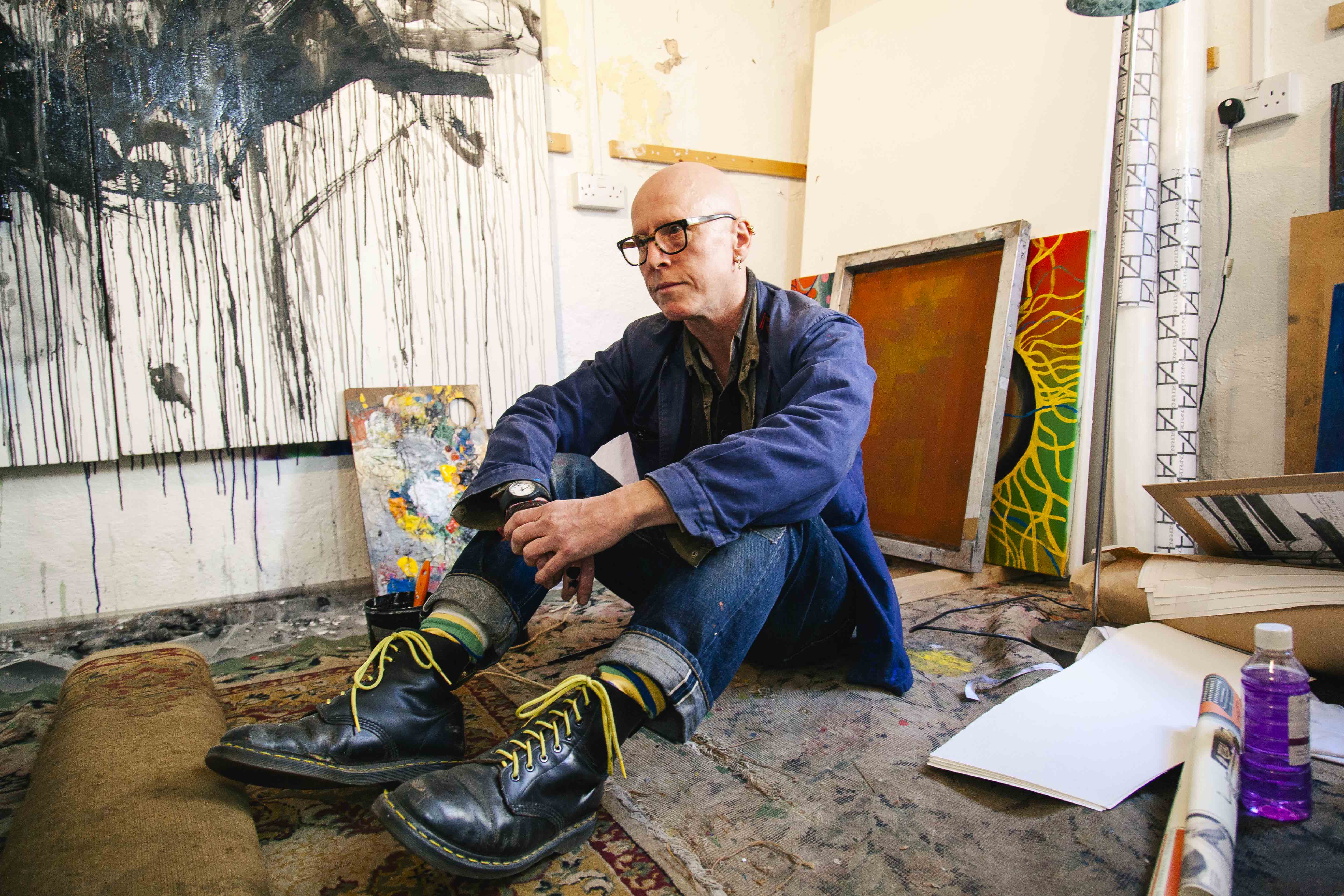 “The nuclear threat is like a dark spectre that has hovered at my back throughout my adult life,” says Donwood.

His first act of civil disobedience came in 1983, aged fourteen, when he joined a demonstration in his hometown of Colchester against America’s decision to station cruise missiles at Greenham Common and Molesworth. “My awareness of nuclear issues increased fast and we set up a Campaign for Nuclear Disarmament (CND) group at school,” he remembers. “It was around then that I began a series of pictures of my hometown with mushroom clouds above.”

Growing up at the end of the Cold War, the possibility of an all-out nuclear war between the West and Soviet Union was very real. “I was extremely conscious of it! It was genuinely a terrifying time,” Donwood reflects. “Thinking about my formative years under the ever-present threat of imminent nuclear annihilation might go some way to explaining [my style].”

Themes of destruction and alienation run through Donwood’s post-apocalyptic work – such as his series of covers for dystopian sci-fi writer JG Ballard – which could explain why he struck up an intense working relationship with Radiohead frontman Thom Yorke, who he met while studying at Exeter University.

“I remember when we were working on the artwork for OK Computer, looking out of the window of Thom’s house and having a strange semi-hallucinatory experience, seeing a post-nuclear attack landscape,” Donwood explains. “Not ground zero, but as if we were fifty miles away. The twigs stripped from trees, a strange sky, an emptiness that was curiously pale. Something like a monochrome version of Paul Nash’s war paintings transported to suburban Oxford. We used a lot of white in the artwork – white as the colour of death, of bones, of ash.”

His work on their latest record, A Moon Shaped Pool follows in a similar vein. It has echoes of the curled and burnt photographs discovered in the wake of nuclear strikes on Hiroshima and Nagasaki. 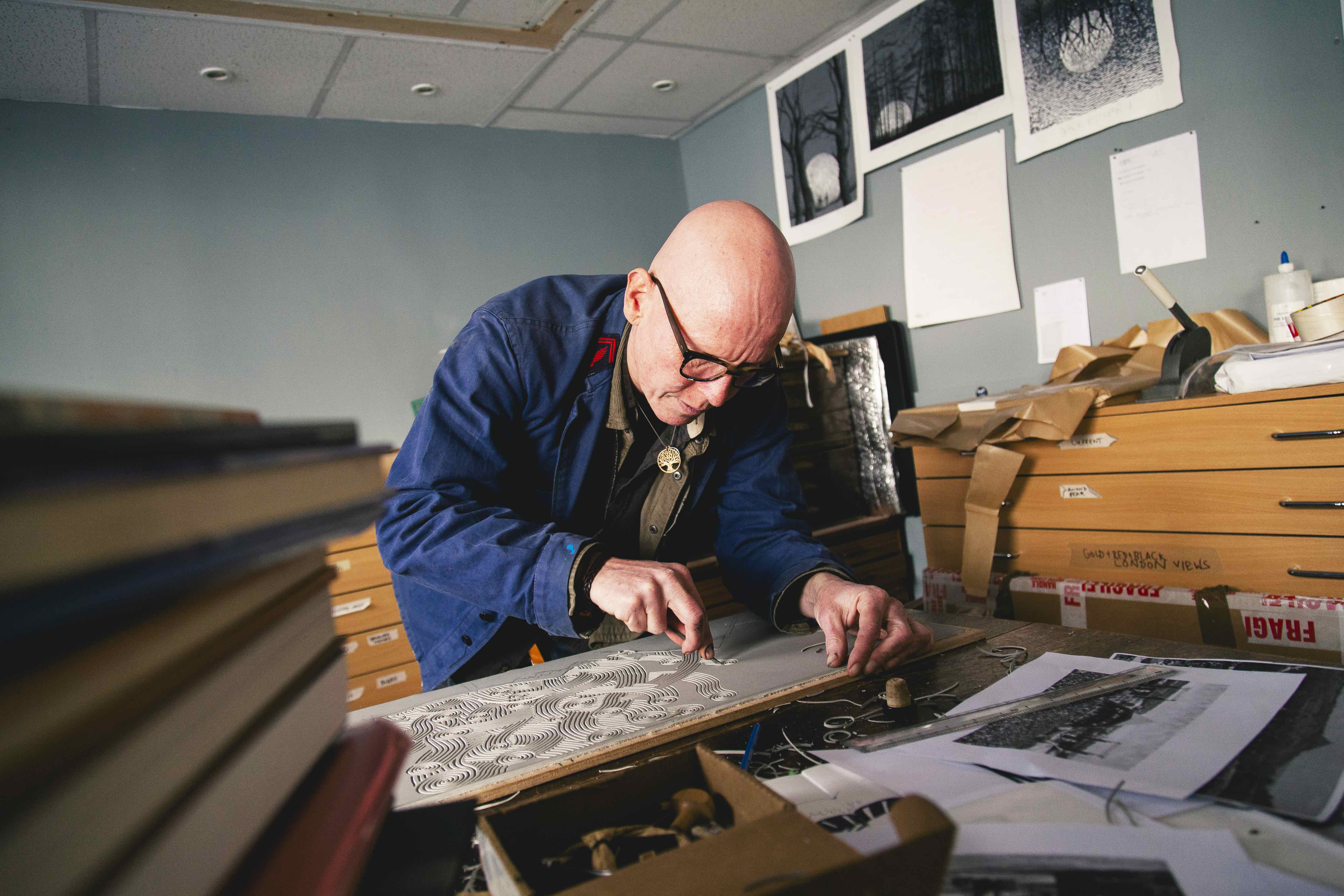 Donwood is art directing the bomb with co-directors Eric Schlosser, Smriti Keshari and Kevin Ford. “The bomb project seemed like a way to try to expose that spectre [of nuclear weapons],” Donwood explains, “because I think that since the end of the Cold War and the cessation of what was hilariously  termed ‘mutually assured destruction’ people have forgotten about the threat of disaster from a nuclear source.”

The starting point for the bomb was Eric Schlosser’s 2013 book Command and Control, which questioned whether nuclear weapons can ever be operated safely and centred around a 1980 accident in Arkansas when a missile equipped with a nuclear warhead exploded. Had the warhead detonated, it could have wiped out the entire state.

Sounding the alarm about this largely forgotten threat, when terrorism and climate change dominate the headlines, seems an uphill battle, but Schlosser has driven seismic shifts in public consciousness before. His 2001 book Fast Food Nation outed the food industry’s darkest secrets, catalysing a movement against the unhealthy and exploitative fast food machine.

“The odds of an all-out nuclear war are lower than thirty years ago, but the odds of one city being destroyed by a nuclear weapon is probably higher today because we have the terrorist threat,” Schlosser explains, adding that there are still over 15,000 active nuclear weapons worldwide – many of which are far less secure than we might hope. “The probability of a nuclear detonation is low, but the consequences would just be unbelievably high. There is no country in the world that has the medical infrastructure that could deal with the detonation of a nuclear weapon in a city.” 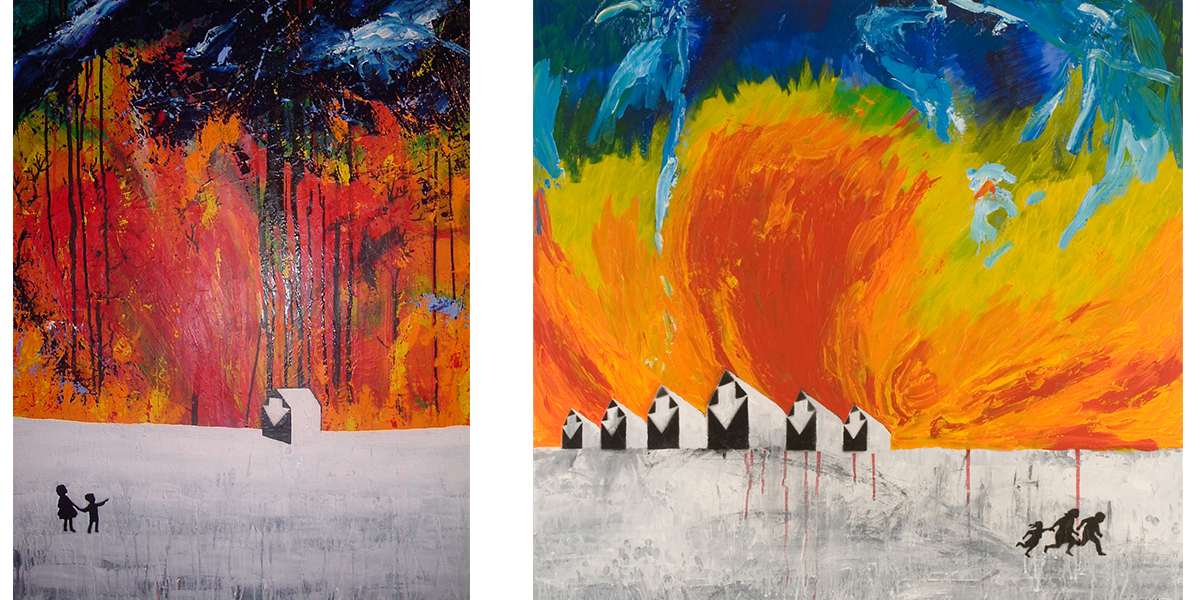 Composed of haunting archive footage of nuclear tests, accidents and public information films, the bomb is a groundbreaking, narrative-free multimedia installation projected on massive floor-to-ceiling screens that surround the audience. It premiered at New York’s palatial Gotham Hall with a live score by The Acid, as part of Tribeca Film Festival, before hopefully touring the globe.

“I’m a real believer in logic and reason and statistics and facts; and yet there are other things that just function on a much deeper level that make an argument more powerful than any set of statistics ever could,” adds Schlosser. “Whether you’re a writer, filmmaker, painter or a photographer, it’s possible to use culture, not just to entertain people but also to energise and wake them up.”

Spending fifty-five minutes in a darkened room, surrounded by instruments of mass destruction is a chilling experience – which was exactly the intention. “the bomb places the audience in the centre of the story of nuclear weapons,” says Keshari.

“It’s not a film for the easily upset,” adds Donwood. “But it’s really a public service film. While we were working on it we would entertain ourselves by asking people how many nuclear weapons they thought there were in the world. No one had the slightest idea that there are currently 15,000 active nuclear weapons on planet Earth. Oh, except Thom Yorke, who we bumped into in Soho. But apart from him, no one had the foggiest idea. So really, the bomb is for those people, enjoying a life of blissful ignorance.”

Linkedin
RELATED ARTICLES
OTHER ARTICLES
A new law change is enabling Britain’s donor-conceived children to know the truth about their origins – but campaigners say the fertility industry must do more to protect people.
Campaigners reflect on what the supreme court’s decision to allow buffer zones in NI means for the future of reproductive rights in the UK.
David 'Dee' Delgado’s photo project is about honouring and uplifting the city of his youth, and a world rapidly disappearing under the relentless onslaught of gentrification.
After a two-year hiatus and a new album, the Nigerian artist is riding high. Now, he wants to bring his alternative, genre-bending sound to the world.
After fleeing the war in Ukraine, people are finding it impossible to secure affordable and decent housing in the UK.
The first-generation graffiti artist reflects on the tagging’s emergence as an art form and the players who pushed the medium forward.