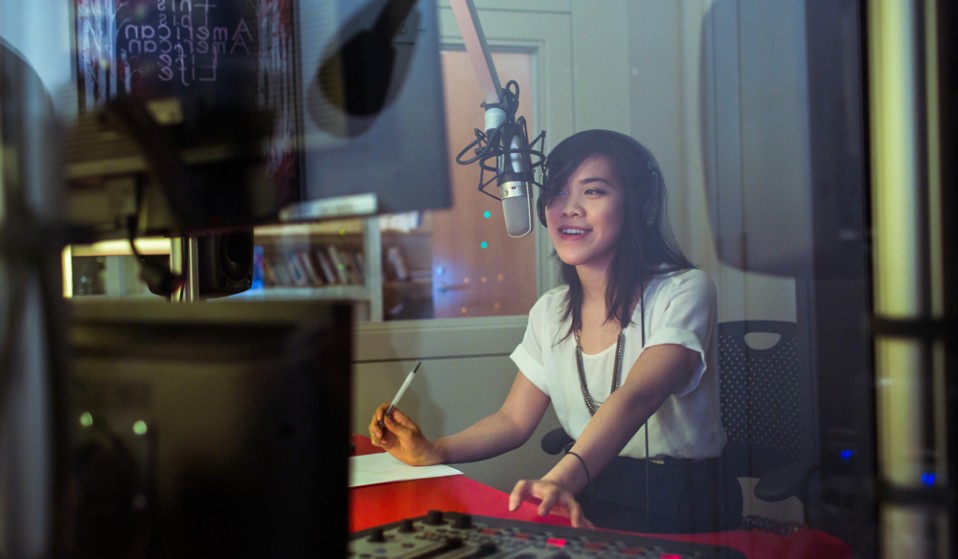 In Huck 50, Stephanie Foo told us about her journey from aspiring journalist to public radio producer, spurred on by a love of great stories. When we asked her about her favourite individual shows and podcasts, she was more than happy to share.

In Huck 50, Stephanie Foo told us about her journey from aspiring journalist to public radio producer, spurred on by a love of great stories. When we asked her about her favourite individual shows and podcasts, she was more than happy to share.

Stephanie Foo certainly knows her radio. The This American Life producer and Snap Judgement alumnus has produced some of public radio’s most compelling storytelling over the last few years, the result of a compulsive stretch listening to Ira Glass through a day at work at an unfulfilling job.

“For eight hours a day,” Foo told us in Huck 50, “I would find myself sobbing and laughing out loud in reaction to this amazing, emotional thing in a way that I’d never really experienced with print. Eventually I was like, ‘I don’t know why I’m doing this with my life.’ My whole life took place while listening to radio, so why not try and do it?”

Digging deep to find stories, dusting off the details to create fascinating radio, Foo maintains that the key to the institution of TAL depends on a never-ending curiosity: “Be curious about the sidewalk, about your friends, this guy in the corner at a cocktail party. Question everything and make stuff out of it, even if it’s just for yourself.”

Foo shared some of her favourite podcasts with us and, needless to say, one show features prominently: “Sorry there’s so much This American Life but what can I say? I really love This American Life.” Alongside those moments, though, are some excellent shows from a new generation of podcasters and some lesser-known stories that might have flown beneath the radar. The descriptions come from the podcasts themselves…

The podcast on which Foo cut her teeth. ‘The Reunion’ features an amazing playlist from the late, great J Dilla.

‘This American Life producer Alex Blumberg explains that he wanted to do this show because of his conflicted relationship with his own testosterone. He tells host Ira Glass that the reasons go back to a girl in his eighth-grade homeroom and the 1970s seminal feminist novel The Women’s Room. We also hear from a man who stopped producing testosterone due to a medical treatment and found that his entire personality was altered.’

‘Some information is so big and so complicated that it seems impossible to talk to kids about. This week, stories about the vague and not-so-vague ways to teach children about race, death and sex – including a story about colleges responding to sexual assault by trying to teach students how to ask for consent. Also, a story about how and when to teach kids about the horrors of slavery and oppression in America.’

‘There’s a program that brings together kids from two schools. One school is public and inthe country’s poorest congressional district. The other is private and costs $43,000/year. They are three miles apart. The hope is that kids connect, but some of the public school kids just can’t get over the divide. We hear what happens when you get to see the other side and it looks a lot better.’

“This one breaks my heart into a million pieces every. Single. Time I listen to it,” says Foo.

‘Chimps. Bonobos. Humans. We’re all great apes, but that doesn’t mean we’re one happy family. This hour of Radiolab: stories of trying to live together. Is this kind of cross-species co-habitation an utterly stupid idea? Or might it be our one last hope as more and more humans fill up the planet? A chimp named Lucy teaches us the ups and downs of growing up human, and a visit to The Great Ape Trust in Des Moines, Iowa highlights some of the basics of bonobo culture (be careful, they bite).’

‘You hear it all the time – people are reading less and watching little videos on YouTube instead of going to the movie theater. It makes you wonder what the future of storytelling might be. We asked Reporter Sean Cole to look into MIT’s plans to team up with a new movie studio in Massachusetts to create the storytelling technology of the future. But instead of doing a radio report about it, he wrote a sci-fi movie-type drama – and cast himself as the reporter. So grab some Jujubes. Sit back. And enjoy the show.’

‘Adam Warner has a very ambitious list of accomplishments he’s trying to achieve. It’s not his list though.’

Reply All #9: The Writing on the Wall

‘Yik Yak is an app that allows users to communicate anonymously with anyone within a 10-mile radius. At Colgate University in upstate New York, the anonymity brought out a particularly vicious strain of racism that shook the school.’

‘Vexillologists—those who study flags—tend to fall into one of two schools of thought. The first is one that focuses on history, category, and usage, and maintains that vexillologists should be scholars and historians of all flags, regardless of their designs. The other school of vexillology, however, maintains that not all flags are created equal, and that flags can and should be redesigned, and improved. Ted Kaye of the Portland Flag Association—the largest subnational flag organization in the country—is one such vexillologist. Kaye has a word for these activist vexillologists of his ilk who go out into the world and lobby for more beautiful flags: “vexillonaires.”‘

Linkedin
RELATED ARTICLES
OTHER ARTICLES
Freddie Miller’s new series of photographs investigates who today’s trainspotters are and what drives their unfettered enthusiasm.
Proposals to introduce a minimum GCSE threshold for student loans will disproportionately affect those from marginalised backgrounds.
Photographer Bruce Gilden discusses his series documenting the overlooked factory workers, labourers and other people residing on the margins of English society.
In the latest instalment of Photographers in Conversation, the chronicler of raves, protests and beyond explains why he’s drawn to such specifically visceral environments.
For decades, an area of East London has served as a community hub for Vietnamese people looking for a taste of home.
The last few years have seen an increase in LGBTQ-led initiatives to feed the hungry, with many finding ways to stay afloat despite the challenges.