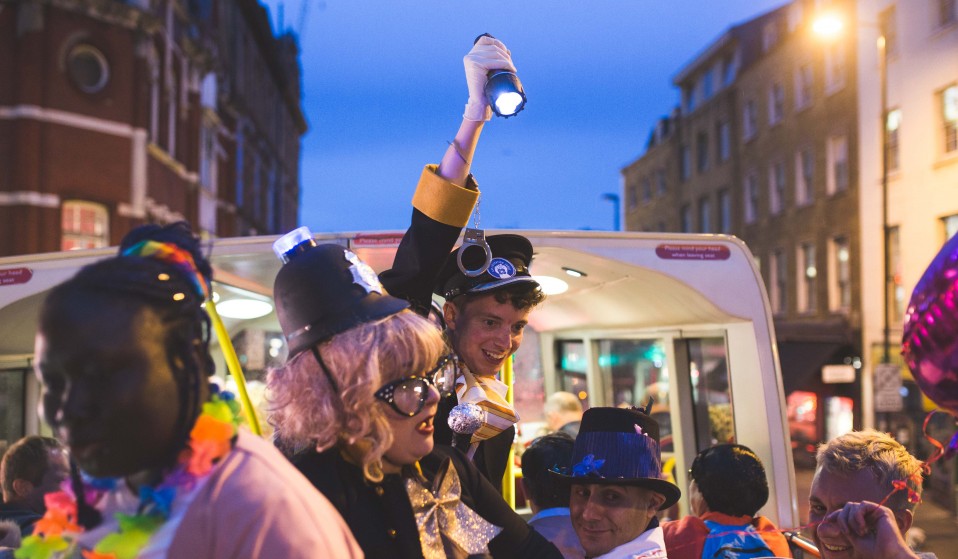 There’s a lot of talk around London and beyond about queer venues closing – the pubs, bars and clubs lost by a community who’ve long had to battle for visibility, security, and spaces to safely call their own. It’s understandable that we’re angry, really, given that between 2006 and 2016 more than half of the capital’s LGBTQ venues shut their doors.

Campaigners across the city and beyond are working hard to move these conversations forward. Lamenting over what has been lost is only worthwhile for activists if we’re also planning for a better future too, else we’re destined to only look at what’s broken without building something new in its place. 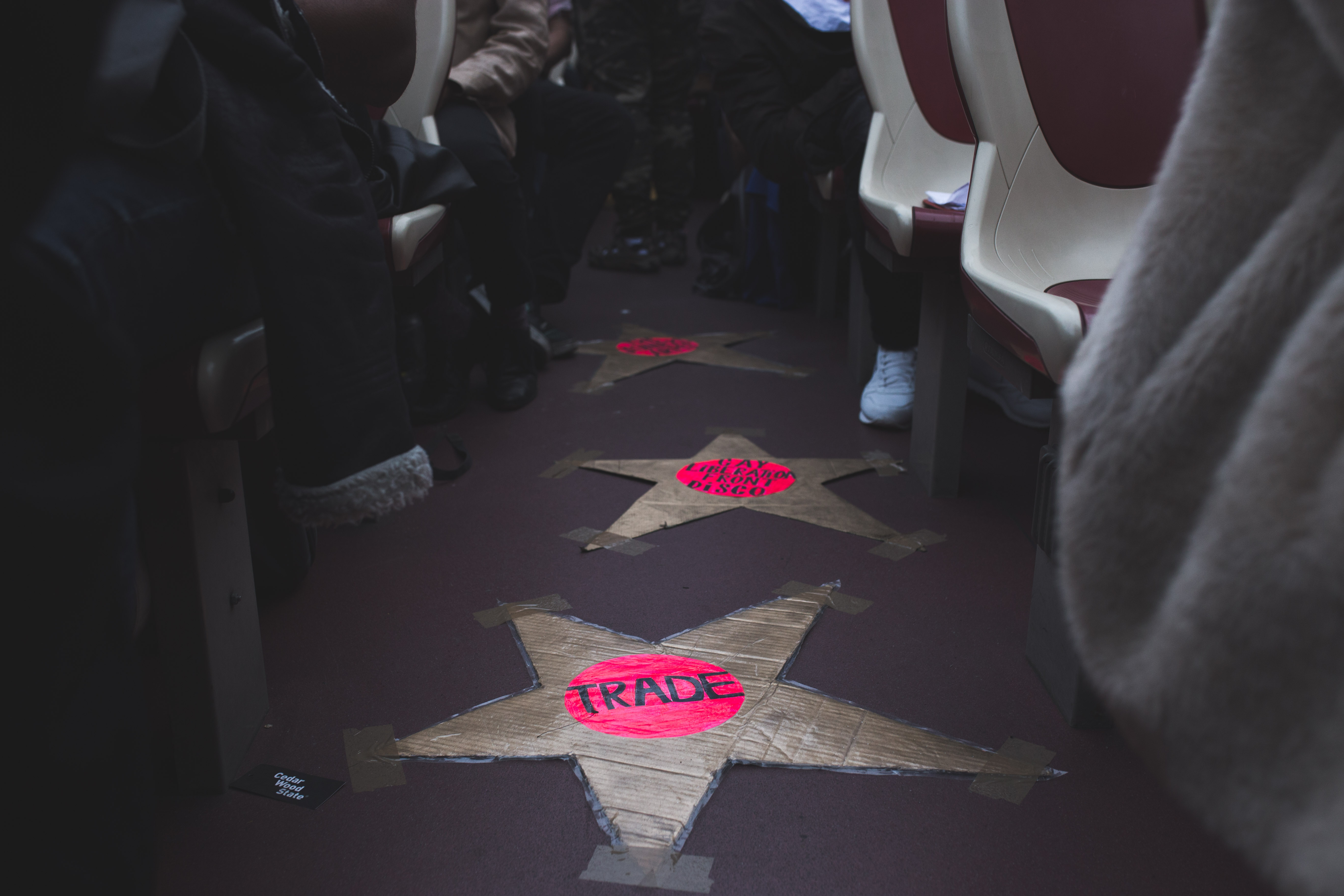 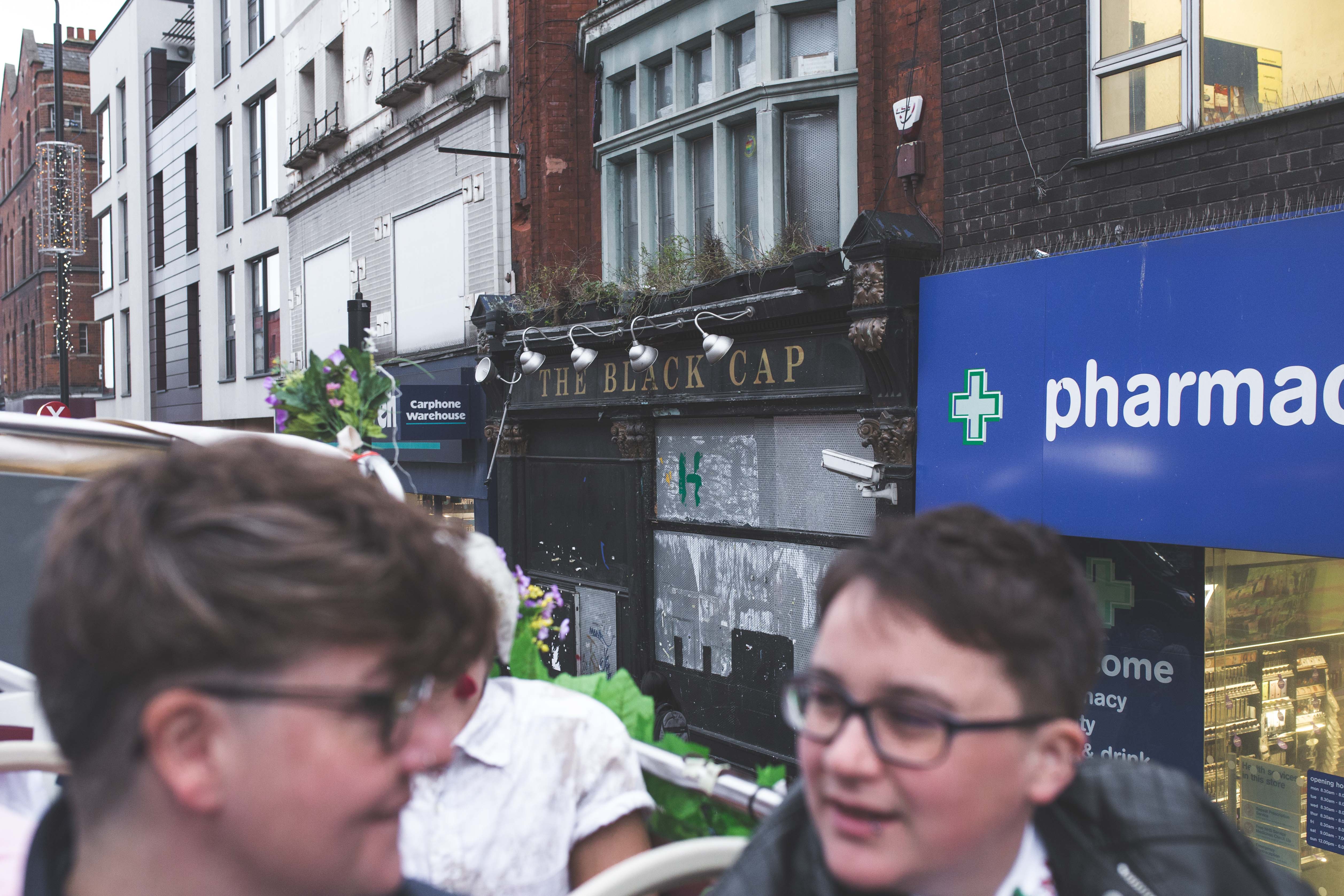 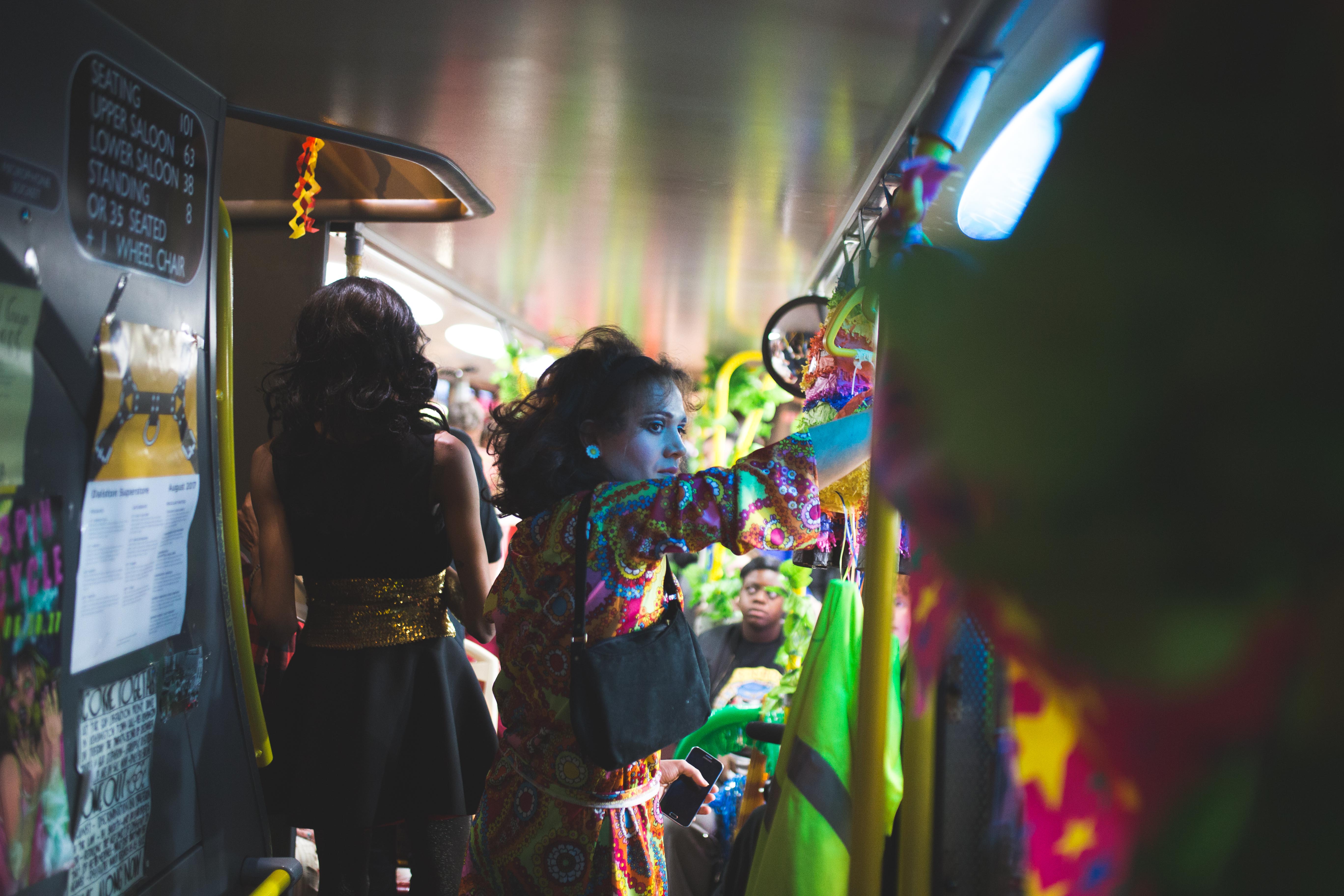 In Camden, North London, We Are The Black Cap are a group fighting to get the historic queer venue – The Black Cap – opened up once again. Just across town in the east of the city, Friends of the Joiners Arms are doing the same, working tirelessly to reopen the doors of the venue that shut up shop back in 2015. There are others, too.

But that’s not to say there’s no value in celebrating and remembering the past, especially to a community which for so many centuries was forced out of site, banished to hide on the fringes of society or locked up in cells. It’s only in the 18th century that London’s queer spaces are first properly documented all – of course they were raided and criminalised – you have to fast forward to the early 1900s to find a wider variety of spaces that we still know about today.

It’s why on a wet and cold Saturday night, a double decker bus brimming with fabulous outfits, placards, banners and booze is parked up outside the Black Cap in Camden. Aboard are a variety of queers from all generations, setting out to share and celebrate LGBTQ history on the Bang Bus – a real life vehicle for change. 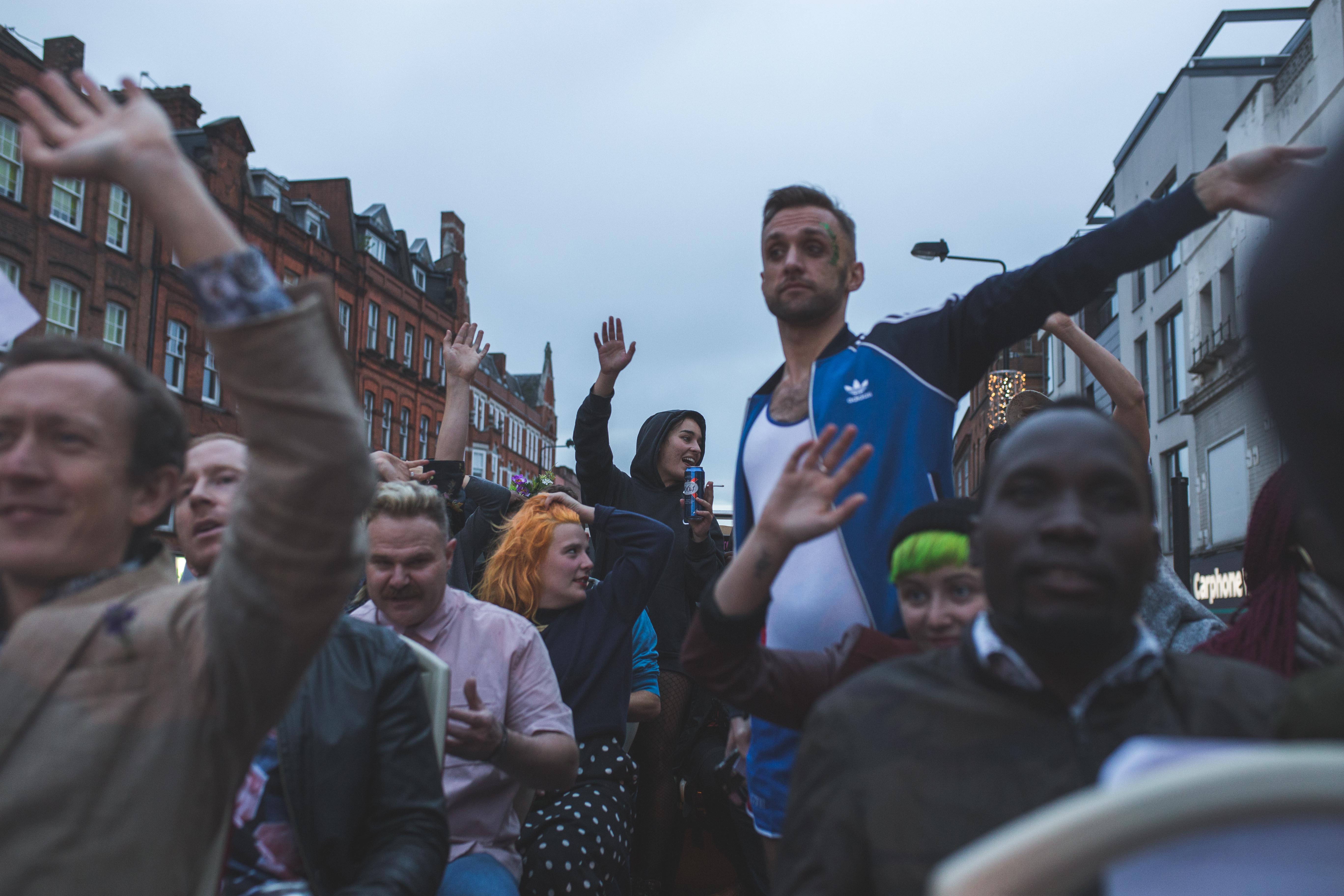 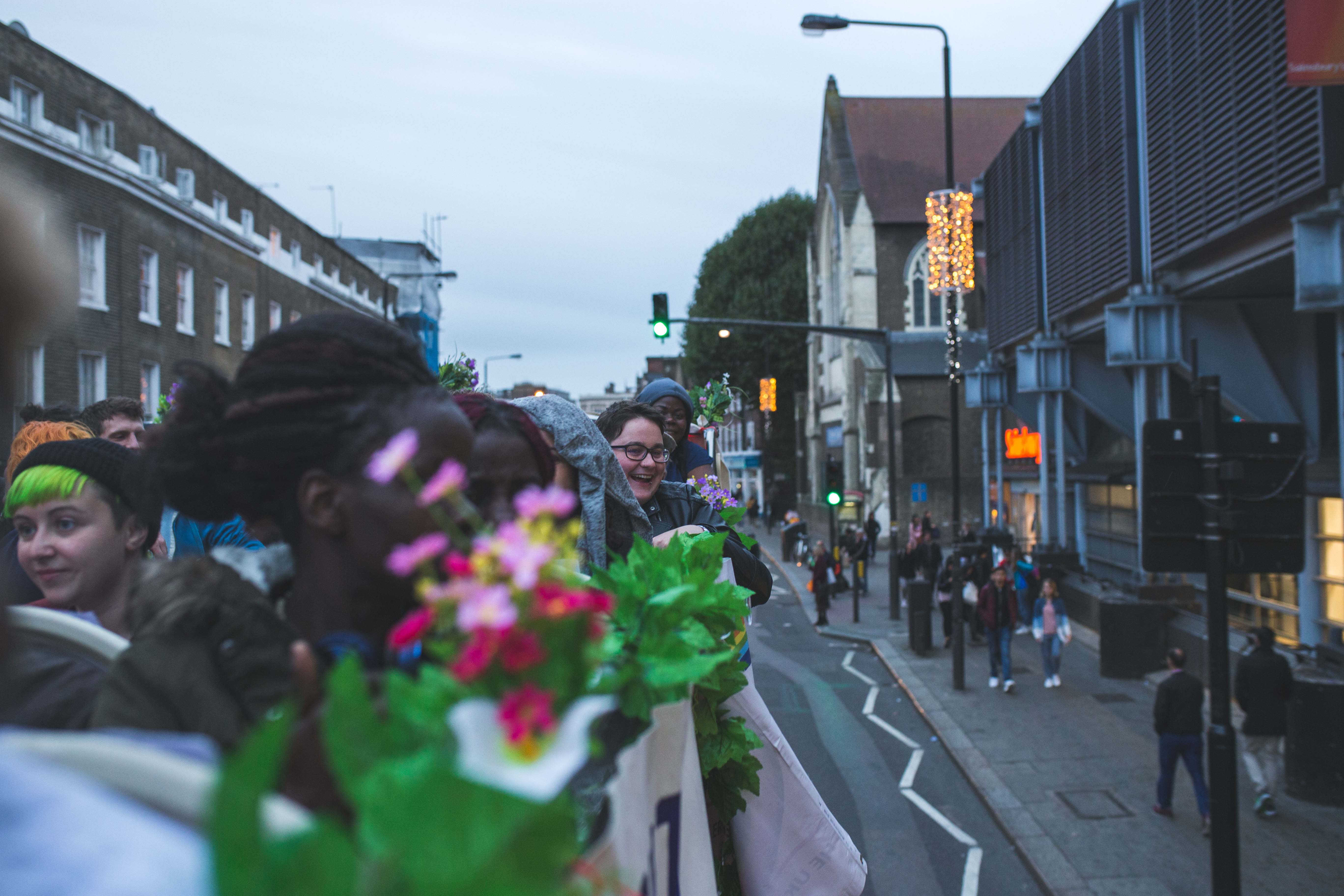 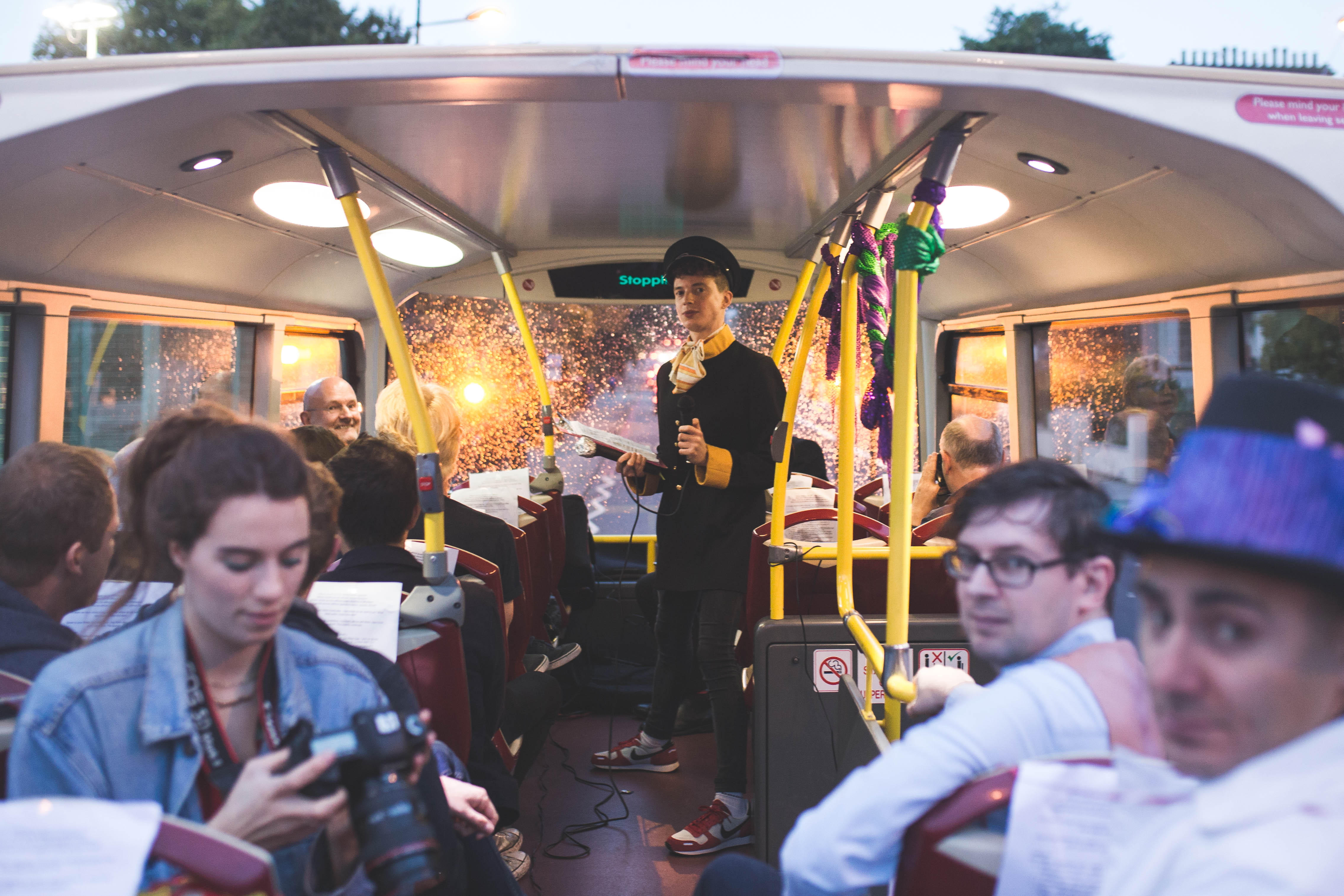 “We’re setting out to weave the fabric of our culture together,” explains Dan Glass, one of the Bang Bus organisers. “By touring the spaces from across our recent history, decade by decade, we see these aren’t isolated incidents. Looking to the future, it’s vital to understand how we became who we are in the past 50 years since partial decriminalisation.”

Setting off from Camden the bus makes its way to Kings Cross Station, the Gay Liberation Front disco situated just around the corner back in the 1970s. At every stop hosts speak about the significance of the location, retelling the stories and memories they associated with the now closed venue, tales that might have been otherwise forgotten, or never known by younger people today. There are people here aged 15 and into their 60s – each recounting their own experiences, learning and listening as they go. 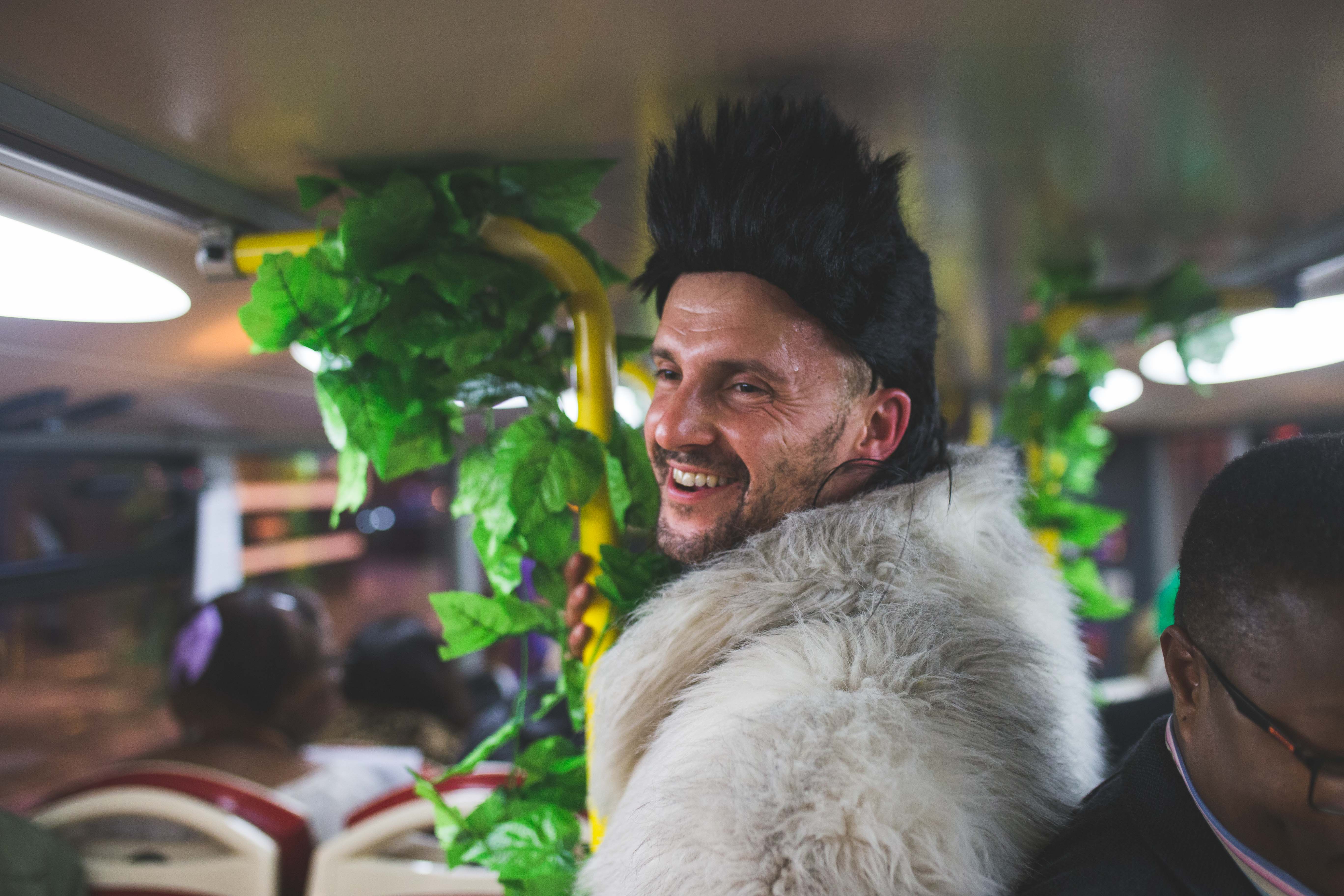 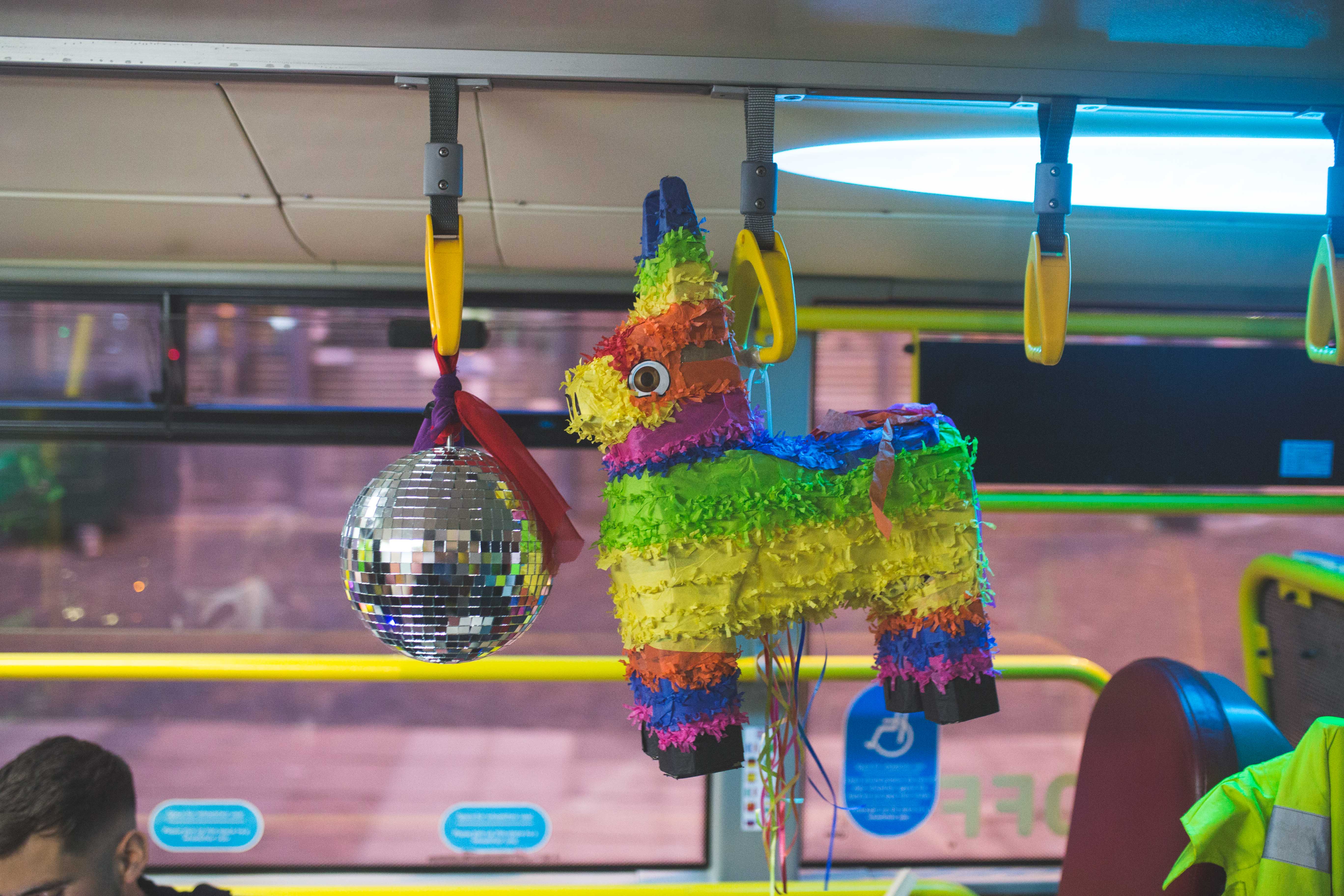 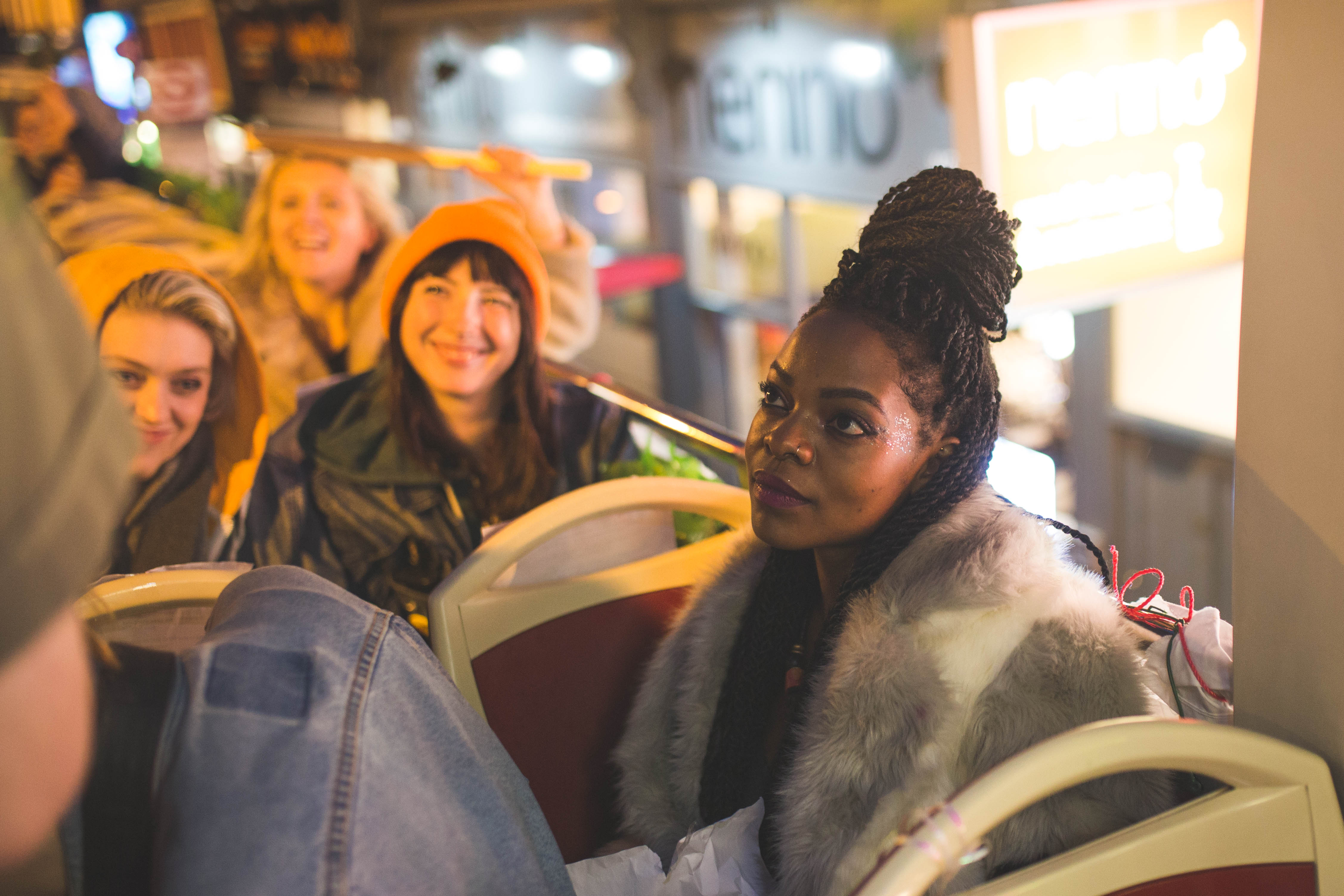 Next on the route are Trade in Clerkenwell, and The Joiners Arms in Hackney – both spaces now closed, for some on board long before their time. The final stop in Dalston Superstore, a queer East London venue currently hosting an exhibition that celebrates London’s LGBTQ nightlife over the past 100 years. Inside, two of the staff talk us through the pieces they’ve collected and collated which hang on the walls, the seamless blending of present, future and past.

There are plans in place to run a Bang Bus once a month, each set to be dedicated to a different element of LGBTQ history. Sure there was silliness in abundance on board – fabulous drag queens, one too many cans, fur coats and frilly stockings which finally descended into a night of sweating and dancing deep underground, but the journey more than an interesting predrink proposition.

The erasure of histories is all too common an experience for LGBTQ people across the globe, the reasons for this can sometimes feel like they never end. Queer doesn’t run in the family, so there’s often nobody obvious to look up to for advice and support. The AIDS epidemic of the 1980s saw much of a generation lost, you can’t listen to and learn from those who’ve already departed. 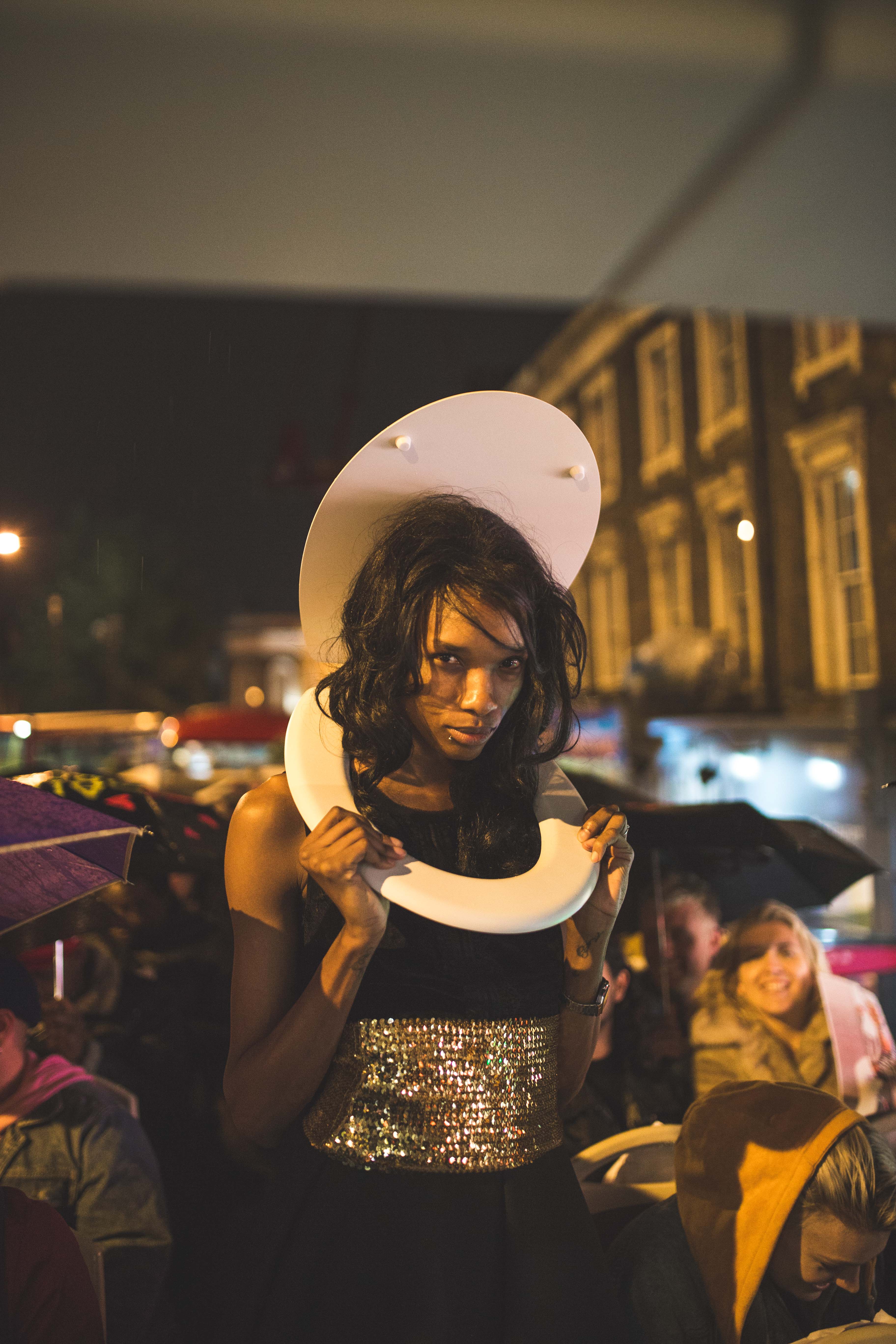 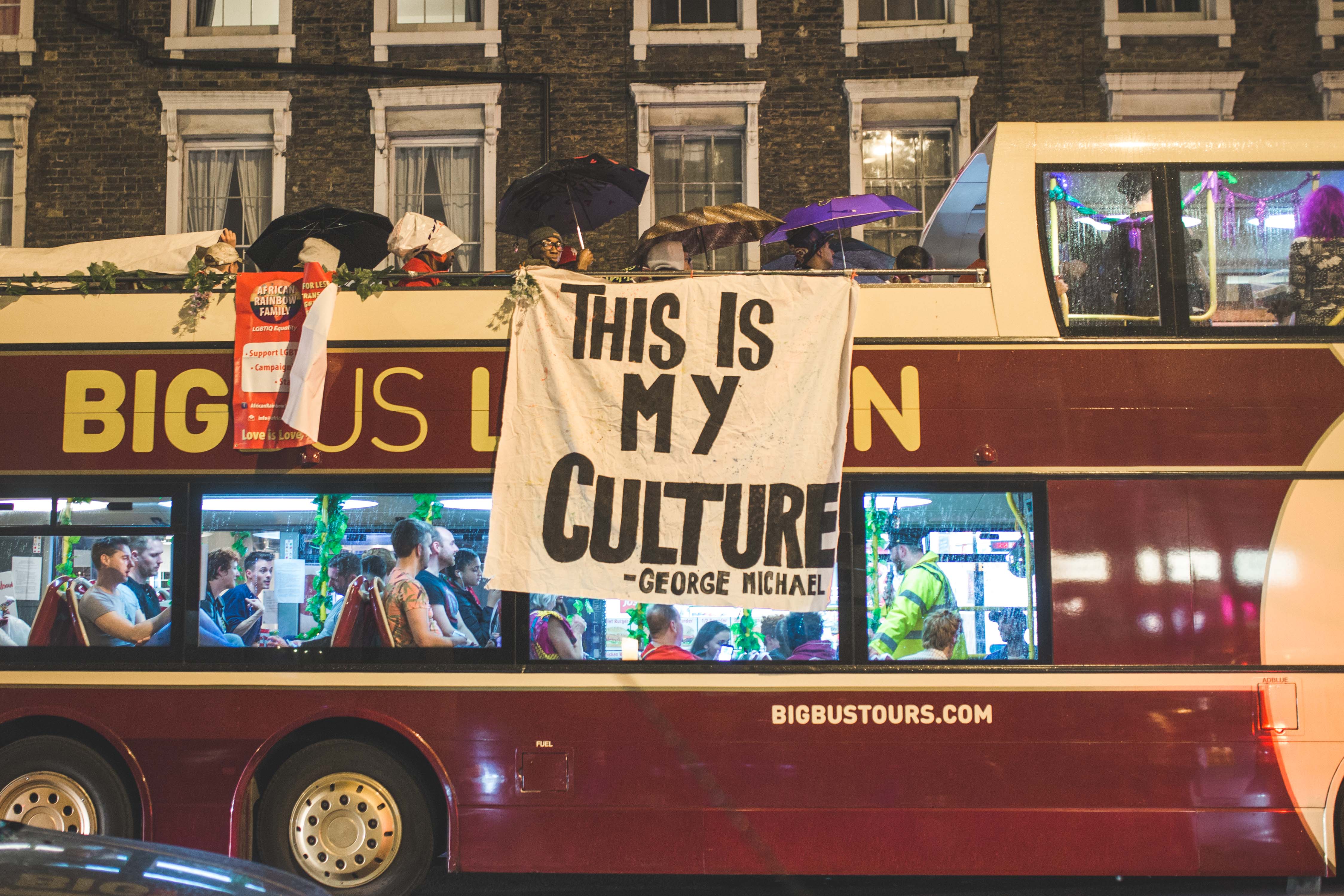 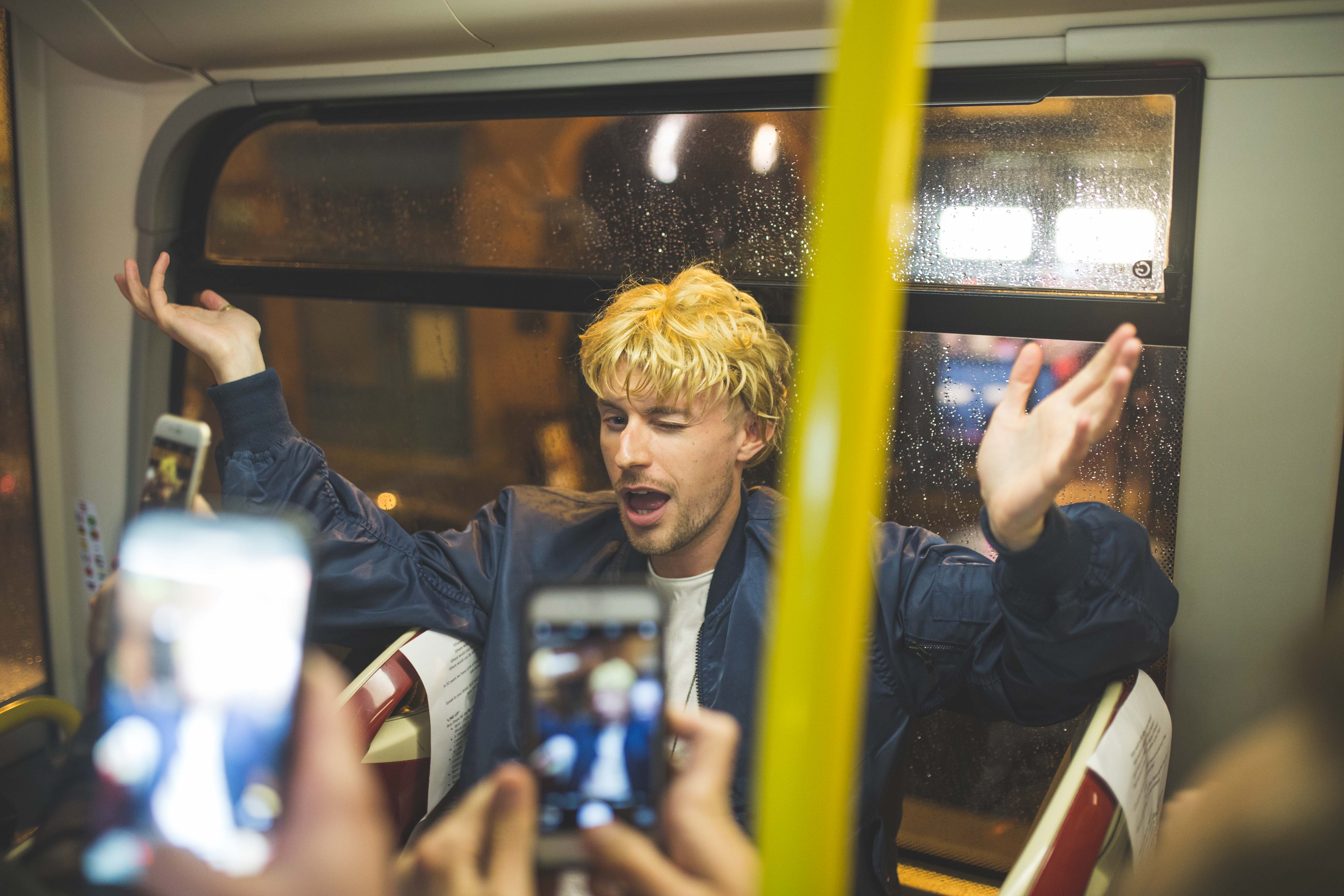 In London at least, what queer venues we do have today are bars and clubs – each plays a vital social function, but they’re often not conducive to young and old meeting to share experiences about their lives. And, of course, to this day in many countries, LGBTQ people are forced underground – living in fear for their personal safety, their families or their lives.

So much of LGBTQ history – even in London – will never be uncovered, and the team behind the Bang Bus are determined that we don’t allow the same thing to happen ever again.

“The bus also has another significance though,” adds Dan Glass, fur coat flapping in the wind. “Right now politicians are throwing our demands and asks under the bus: Where is our queer museum? Where is our queer community centre? Where are our social housing programmes, protection of queer venues, support services that could quite literally save lives? London compared to all the other big metropolises is well behind the times.”

By retracing the LGBTQ community’s steps, the team behind the Bang Bus hope they’ll be able to find lessons for the future. Based on its maiden voyage – complete with fake police raids and lip-syncs – they have every chance. If not though, there are worse things than drinking tins of Stella on the upper deck of an open top tour bus with performers, fabulous freaks and friends, celebrating while concocting plans for the future with glitter wherever you turn your eye.

Linkedin
RELATED ARTICLES
OTHER ARTICLES
After building his reputation covering the US civil rights movement in the 1960s, the photographer went on to produce some of the most enduring images of the past century.
After fleeing the war in Ukraine, people are finding it impossible to secure affordable and decent housing in the UK.
Jeffrey Henson Scales intimate portraits and protest images of the BPP and its leaders offer a rare insight into organisation at a time of societal upheaval.
The first-generation graffiti artist reflects on the tagging’s emergence as an art form and the players who pushed the medium forward.
David 'Dee' Delgado’s photo project is about honouring and uplifting the city of his youth, and a world rapidly disappearing under the relentless onslaught of gentrification.
Campaigners reflect on what the supreme court’s decision to allow buffer zones in NI means for the future of reproductive rights in the UK.