Art & Culture / What’s next for the Afrofuturist movement? 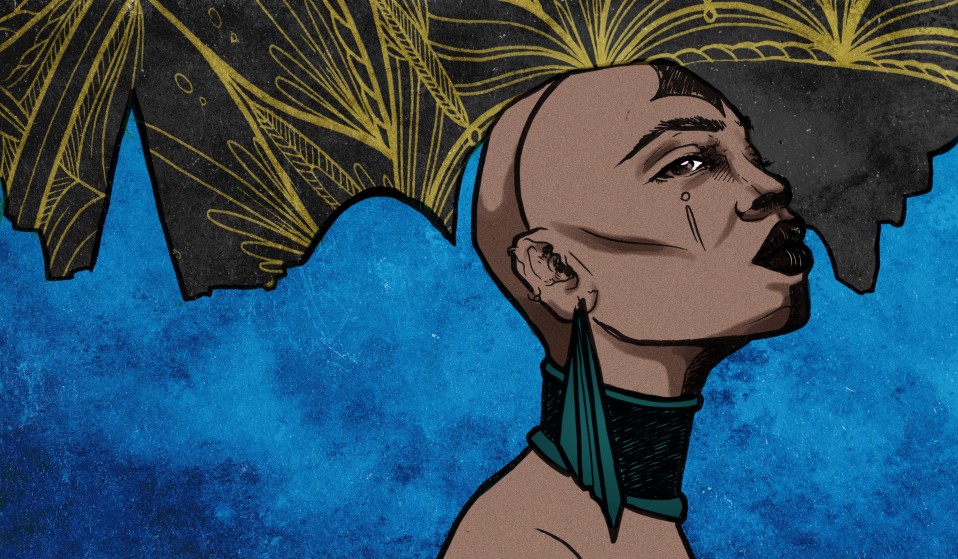 After the global success of Marvel’s Black Panther, Afrofuturism is now more visible than ever. But does that mean it’s in danger of losing its edge? Writer Tola Onanuga examines the countercultural movement’s past, present and potential future.

After the global success of Marvel’s Black Panther, Afrofuturism is now more visible than ever. But does that mean it’s in danger of losing its edge? Writer Tola Onanuga examines the countercultural movement’s past, present and potential future.

With its uncompromising vision of an empowered, technologically advanced African country, Black Panther has thrust Afrofuturism into the limelight. The Marvel epic is directed by Ryan Coogler, an African-American, and features a talented black-majority cast playing multi-dimensional, non-stereotypical characters. Its huge popularity with fans and critics alike propelled the film to the top of box offices around the world, and helped it become a bonafide pop culture masterpiece.

From the costumes to the technology to the politics, Afrofuturistic themes are at the heart of Black Panther. (For example, the portrayal of Wakanda as prosperous and self-sufficient invites viewers to imagine how African countries might have fared without colonisation). But to understand exactly what Afrofuturism is and where it originated, we need to look to the past.

The specific term ‘Afrofuturism’ was coined by US critic Mark Dery in his 1993 essay Black to the Future. Dery described the term as speculative fiction that “addresses African-American concerns in the context of 20th-century technoculture – and, more generally, African-American signification that appropriates images of technology and a prosthetically enhanced future.” But although there was a serious discussion about Afrofuturism in the 1990s, artists and musicians were exploring its themes long before that.

The US jazz experimentalist Sun-Ra was considered an early Afrofuturist pioneer in the ’50s. When performing, he often dressed in spacesuits or outlandish outfits as a way of incorporating extraterrestialism into his explorations of black identity. The timing of his work was important: racial segregation had created an oppressive and often brutal environment for black people in the US, and at a time of such oppression, it provided a creative outlet for African-Americans to imagine alternative realities. Most importantly, it placed them at the centre of their own narratives, allowing them to tell their stories on their own terms.

In the latter part of the 20th century, the writing of African-American author Octavia E Butler became heavily associated with Afrofuturism. Butler was adamant that black characters, especially female ones, could be protagonists in literary works. Because of this, much of her writing, including her award-winning short story collection, Bloodchild and Other Stories, was written from the perspective of black women who had been pushed to the margins of their dystopic or alien environments.

Isiah Lavender III is an assistant professor of English at Louisiana State University, who teaches and researches courses in African American literature and science fiction. “Black science fiction has been around at least 160 years if we go back to Martin R Delany’s serialised novel Blake or the Huts of America,” he explains. “Sheree Renée Thomas did the world a massive favour when she edited Dark Matter: A Century of Speculative Fiction from the African Diaspora in 2000 and Dark Matter: Reading the Bones in 2004, in bringing greater attention to how blacks have envisioned futures for themselves.”

Afrofuturism has an undeniably impressive history, but how does it fit into the modern world? Lavender III, who, in addition to his teaching role, is working on his second monograph, Classics of Afrofuturism, explains: “[Writer and musician Greg Tate] tells us that ‘black people live the estrangement that science fiction writers imagine.’ Now that’s a powerful thought. Afrofuturism has emerged to understand the science fictional existence that blacks have always experienced living in the new world – an unreality driven by economic demands, would-be science and skin colour.”

The Afrofuturism that we see in present-day popular culture is hugely diverse. Musicians such as Anbuley, who blends the traditional music of her native Ghana with synths and deep house beats, are taking it to exciting new levels. Then, of course, there’s US musician and actress Janelle Monáe, whose Android-heavy brand of Afrofuturism probes the role of gender, sexuality and technology in popular culture, and has proved critically and commercially successful.

In the literary world, Nigerian-American author Nnedi Okorafor has produced several books with Afrofuturistic themes, including Shadow Speaker, which is set in 2070 and follows the adventures of a Niger-based Muslim teenager in the aftermath of a nuclear war. Along with Okorafor, Lavender III points to a number of other exciting literary voices that are exploring Afrofuturism, including Nisi Shawl, NK Jemisin, Tobias Buckell, Tomi Adeyemi and Rivers Solomon. The blending of sci-fi with African mythology produces deeply compelling stories and perhaps that’s why it continues to inspire.

So what’s next for Afrofuturism? When an artistic genre moves into the mainstream there’s always a danger that it will lose its edge, but Lavender III hopes it continues to grow as a creative cultural movement.

“Black creators have always engaged with it, even when society has not noticed,” he says. “It seems natural to consider if Afrofuturism is merely a ‘coloured wave’ within science fiction history, analogous to aesthetic movements such as the New Wave or cyberpunk. But I hope its multi-genre status provides it with the kind of energy that transcends (and transforms) science fiction history as we know it. Today’s Afrofuturism is only one way to describe black speculative cultural practices across the globe. Something better over the horizon might come along.”

Looking beyond Black Panther, it’s fascinating to think about where Afrofuturism will go next. It has now become a widely appreciated global movement encompassing fashion, art, politics and literature. As Lavender III states: “Afrofuturism in all its intellectual dynamism has sparked a cultural revolution in the sense that we see people imagining futures in full colour through different interpretive lens such as techno-orientalism, indigenous futurism, LatinX futurism and moving us forward as a species! That’s its enduring appeal”

Linkedin
RELATED ARTICLES
OTHER ARTICLES
Sean Maung’s photos are a love letter to the Black and brown communities that make up New York.
Cindy Campbell recounts how her brother ushered in a new era of musical culture at a party she held in the Bronx in ‘70s.
A new project is documenting formerly incarcerated people as they transition back into civilian life.
The idea that a younger generation is abandoning work has become a popular narrative online, but it doesn’t necessarily reflect reality.
As the Scottish government announces a rent freeze, an activist with Living Rent who fought and won shares how they did it, and what must come next.
Yesterday thousands gathered outside Buckingham Palace after news of the Queen’s death broke.