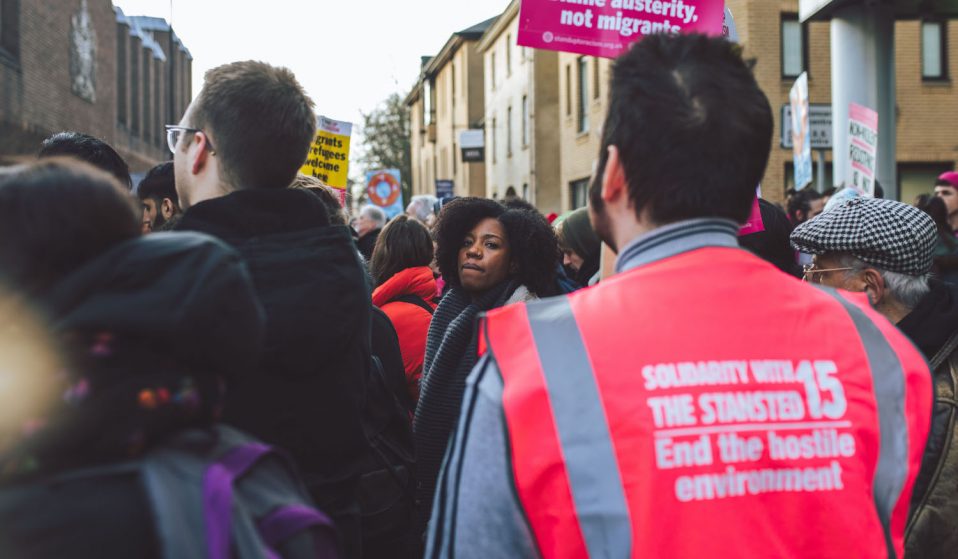 Minnie Rahman explains why Labour must support freedom of movement.

With migration once more on the political agenda this election, Minnie Rahman of the Joint Council for the Welfare of Immigrants explains why if Labour is truly the party of the working class it must stand up for migrants' rights.

As the General Election looms, migration is again taking centre stage. With the Conservative party seeks to continue its crackdown on migration, it’s been most welcome that the Labour Party has made significant progress in its stance on migrants’ rights with the adoption of a motion seeking to protect and extend freedom of movement. It was therefore extremely disheartening to see Unite’s General Secretary, Len McCluskey, regurgitating a narrative which pits the “white working class” against migrant workers and perpetuates the false notion that free movement undercuts wages for British workers.

It is unclear what McCluskey truly believes, particularly as he, along with Unite’s leadership, voted in favour of the freedom of movement motion. Yet by pandering to this fictional narrative, he has weakened the progress that Labour has made on migrants’ rights, and has failed to read the room – particularly as freedom of movement is overwhelmingly popular with the general public.

One of the founding principles of freedom of movement was to ensure that all workers had the same rights across the EU. Under free movement, EU migrants are protected by UK employment laws, have the right to be paid annual leave and statutory sick pay, and must pay tax and national insurance.

Whilst it’s difficult to definitively measure the overall effects of migration on jobs there is simply no evidence that it drives down wages, particularly for the working class. Migrants themselves are disproportionately represented in low-wage sectors. Of the few studies carried out on the impact of migration on wages, research from University College London found that migration can lead to an increase in the wages of higher-paid workers. But significantly, research from Migration Observatory highlights that the people most at risk of having their wages lowered by migration are other migrants.

The impact of migration on jobs depends on who you are, what kind of job you do and where you do it, but most importantly depends on government policies. A recent report by the Migration Advisory Committee found that other factors had a greater impact on wages, with all workers having done badly since the financial crisis of 2008. Real wages are still struggling to rise above where they were in the aftermath of the crisis and the ongoing barbarity of austerity. It is vital that migration is never viewed in isolation from policies related to housing, healthcare, employment and welfare.

The UK has one of the most ‘flexible’ labour markets in the EU but also has one of the weakest labour law enforcement structures which means abusive employers are able to get away with the exploitation of workers. In many cases, migrant workers are actually leading the battle to ensure that standards rise for all workers.

The UK’s approach to increase restrictive border controls and introduce evermore draconian immigration policies, and particularly to criminalise working under the “hostile environment” is highly counterproductive. Under these measures, any worker without documentation faces arrest or indefinite detention but is also unable to come forward should they be subject to labour abuse. The “hostile environment” creates a situation in which exploitative employers drive down and undercut wages for the undocumented, and therefore the entire workforce because they simply have no avenues to come forward without repercussion.

We already know that the “hostile environment” not only impacts irregular migrants but directly causes racial discrimination for British citizens and can make life far more difficult for everyone in employment too, not just those without documentation.  Workers with a legal right to be in the UK, particularly those who are on lower wages become unsure of their rights and in many cases are denied employment if they don’t present the “right” documentation. This is exactly what happened to those from the Windrush generation, like Kenneth Williams, who suddenly found themselves unable to work due to these restrictive measures. When McCluskey argues for an end to free movement, he is arguing directly for a levelling down of rights for all workers. By focussing on border control, politicians have been able to deregulate the labour market with little scrutiny and make trade union engagement more difficult.

The levelling up of rights for all workers should be a priority for McCluskey, and yet, it appears that he has ended up on the side of rogue employers and policies which fail to uphold workers’ rights. If so, surely this is not where he wants to be. Free movement is the only way to ensure strong labour protections for all workers, regardless of status. It is right that we should fight to maintain freedom of movement for EU nationals and consider how we can extend these rights to workers outside the EU too.

Register to vote before 26th November to make sure your voice is heard this general election.

Linkedin
RELATED ARTICLES
OTHER ARTICLES
As the Scottish government announces a rent freeze, an activist with Living Rent who fought and won shares how they did it, and what must come next.
The two-day long event returned to London this year, showcasing a spectacular parade, steel bands and Caribbean food.
Rhiannon Adam spent three months capturing an ageing society wracked by division, isolation, and the aftermath of scandal.
By turning a real-life crisis into daytime television fodder, TV bosses have once again shown themselves to be completely out of touch with audiences.
Cindy Campbell recounts how her brother ushered in a new era of musical culture at a party she held in the Bronx in ‘70s.
A new project is documenting formerly incarcerated people as they transition back into civilian life.