News & Politics / Opinion / JK Rowling is not the victim here 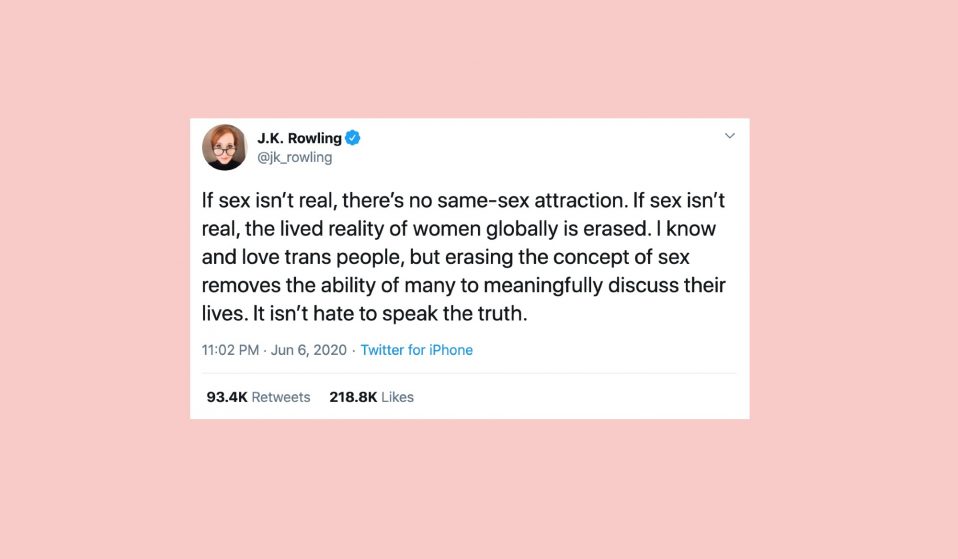 The author’s view on trans people is dogmatism dressed up as rationalism – she is casting herself as a victim in a fight she has no place in.

The author’s view on trans people is dogmatism dressed up as rationalism – she is casting herself as a victim in a fight she has no place in.

In her spare time, JK Rowling likes to think about trans people. In fact, the multi-millionaire – who lives in a sprawling country estate in Scotland and boasts over 14 million followers on social media – has spent years reading up on the marginalised group. She said so herself last night in a widely shared blog post, which saw her question their existential rights, their personal freedoms, and whether they should be allowed to freely use public toilets.

You’d think, given that the world is on literal and figurative fire, that there would be other things on her mind. We are in the midst of one of the most significant social uprisings in almost a century; a moment centred on black lives and racial justice. With a platform that big, and with such an abundance of material wealth at her disposal, she has the potential to bring real, seismic change to the cause. And yet.

For Rowling, it seems that now isn’t the time to speak on all that. For her, the most urgent issue is her oppressed opinions on trans people. You know, the severely at-risk group who make up less than one per cent of the population in the UK, who are three times more likely to attempt suicide, and who are widely vilified in both their personal lives and the mainstream media. They are what we should really be debating at this time. They are the real danger (that and the introduction of gender-inclusive changing rooms in Marks and Spencers).

Rowling’s 3,600 word post, shared on her official website yesterday, is the first official statement of her views on trans rights. There have been hints on her Twitter before – deafening dog whistles and questionable “likes” and follows – but this was her most loud and detailed admission on the public stage. Her overall message was jumbled, but the main crux seemed to be a critique of contemporary trans activism. “I refuse to bow down to a movement that I believe is doing demonstrable harm in seeking to erode ‘woman’ as a political and biological class and offering cover to predators like few before it,” she wrote.

While it would be much easier to just ignore this kind of behaviour and pretend it isn’t happening, the factual inaccuracies scattered throughout Rowling’s post are dangerous – especially given the astronomical size of her platform. She makes vague references to an “increasing number” of people detransitioning to their original sex and causing “irrevocable” damage to their bodies (all myths we, and many others, have previously debunked).

In an attempt to paint her critics as irrational, Rowling makes emotional, sweeping statements that seem to have little grounding in reality, casting herself as a victim in a fight that she shouldn’t even have any place in. She mentions facing a tirade of online abuse for being “a TERF” – which includes being called a “bitch” and “Voldemort” – and uses the piece to conflate trans activists with incels and Donald Trump. She appears to disregard some of the vile language used by the more unhinged members of the TERF movement, who Rowling either follows or supports.

Her online abuse is regrettable, and a struggle faced by many women. But it is barely even comparable to the systemic harm, torment and violence faced by trans people all over the world. For them, this kind of bullying is relentless and inescapable, transcending far past the Twitter DMs to become a life or death issue. Rather than discussing their plight in any detail, though, Rowling places herself in the centre of the narrative.

It’s a broken argument, that is – more than anything else – self-centred and unaware. Like so many other older, cosseted liberal voices in this country, Rowling seems to believe her opinion is rational, nuanced and informed; a voice of reason amongst all the chaos. She has read the books, the papers, the studies; she has extensively researched the issue (she definitely hasn’t). She has trans friends! She knows butch lesbians! She should be allowed to assert these views because that is what free speech is all about (unless, of course, you criticise and question her, when she’ll call you out for harassment).

But really, there is nothing nuanced about Rowling’s view. It is dogmatism dressed up as rationalism. In debating whether or not someone has a right to live freely and have agency over their own identity, you are taking the role of the oppressor. While there may be exceptions – rare cases of botched detransitions or of wigged-up bogeymen sneaking into women’s bathrooms – these cases should not be used to define an entire group of people. In 2020, it feels strange to have to even point that out. There’s a reason we don’t still debate whether women are of sound enough mind to vote, and there’s a reason we don’t debate whether being gay is a sexual perversion. It’s the same reason we shouldn’t be debating trans rights. It’s called progress.

Linkedin
RELATED ARTICLES
OTHER ARTICLES
The first-generation graffiti artist reflects on the tagging’s emergence as an art form and the players who pushed the medium forward.
From snake handlers to mardi-gras revellers, Tom “TBow” Bowden’s photos provide a snapshot of the wonderful and weird people who make up America.
Activists and campaigners are fighting back against new laws that would seriously undermine the ability to take industrial action, calling it an attack on fundamental workers' rights.
A new film from Berghaus traces the story of Adam Raja, who left behind a turbulent upbringing to discover the healing power of climbing.
After fleeing the war in Ukraine, people are finding it impossible to secure affordable and decent housing in the UK.
David 'Dee' Delgado’s photo project is about honouring and uplifting the city of his youth, and a world rapidly disappearing under the relentless onslaught of gentrification.