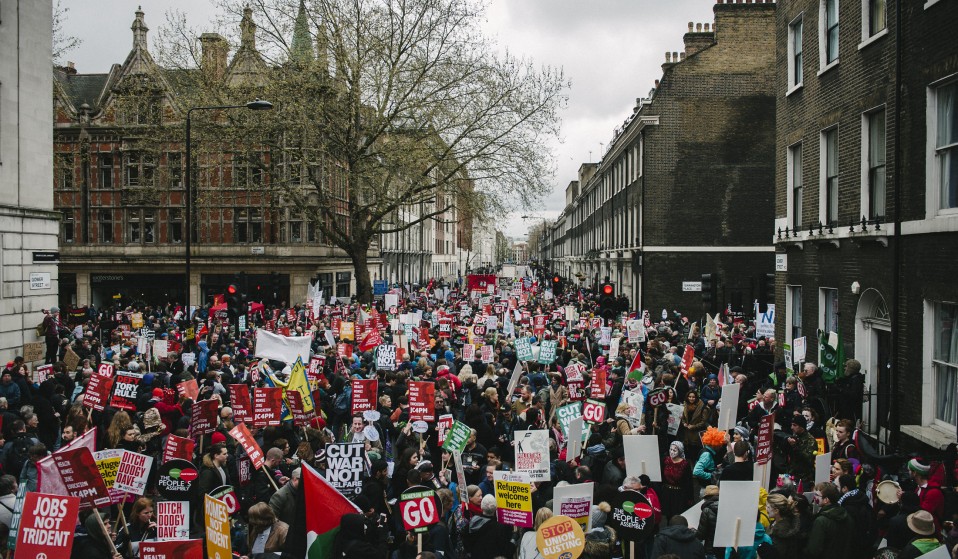 Demanding health, homes, jobs and education for all.

This Saturday 150,000 people descended on the British capital to call for an end to austerity, and with #4demands of health, homes, jobs and education for all. We headed down to see what was happening.

Central London was brought to a standstill on Saturday as protestors from across the United Kingdom took to the streets for the largest anti-austerity protest to hit the capital so far in 2016. 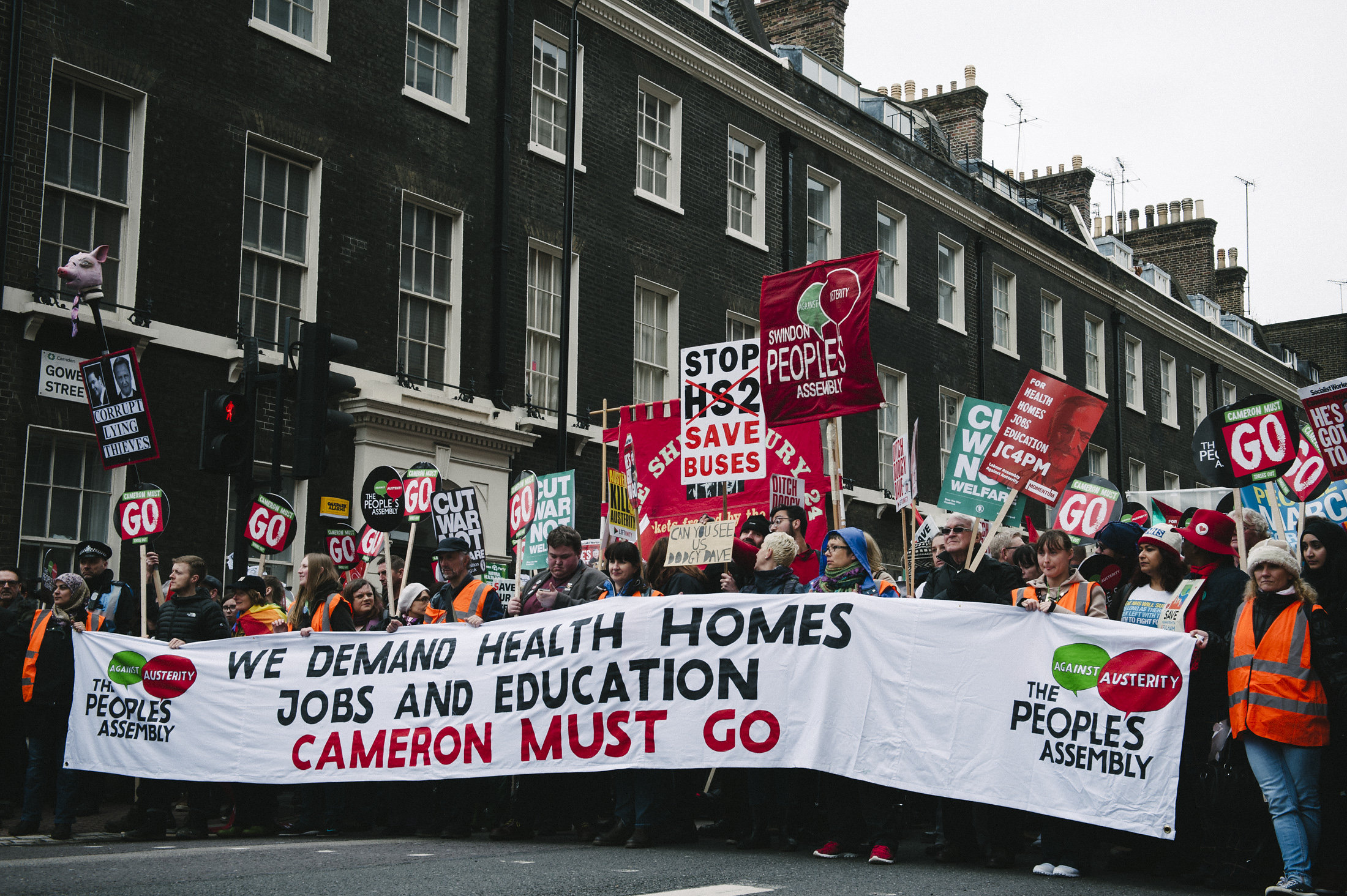 After last week’s march snaked through London, with a few thousand people heading into the city to demand David Cameron’s resignation, momentum had only been growing for this weekend’s march. Meeting on Gower Street, the heart of London’s university district, the crowds were flowing down every side street. 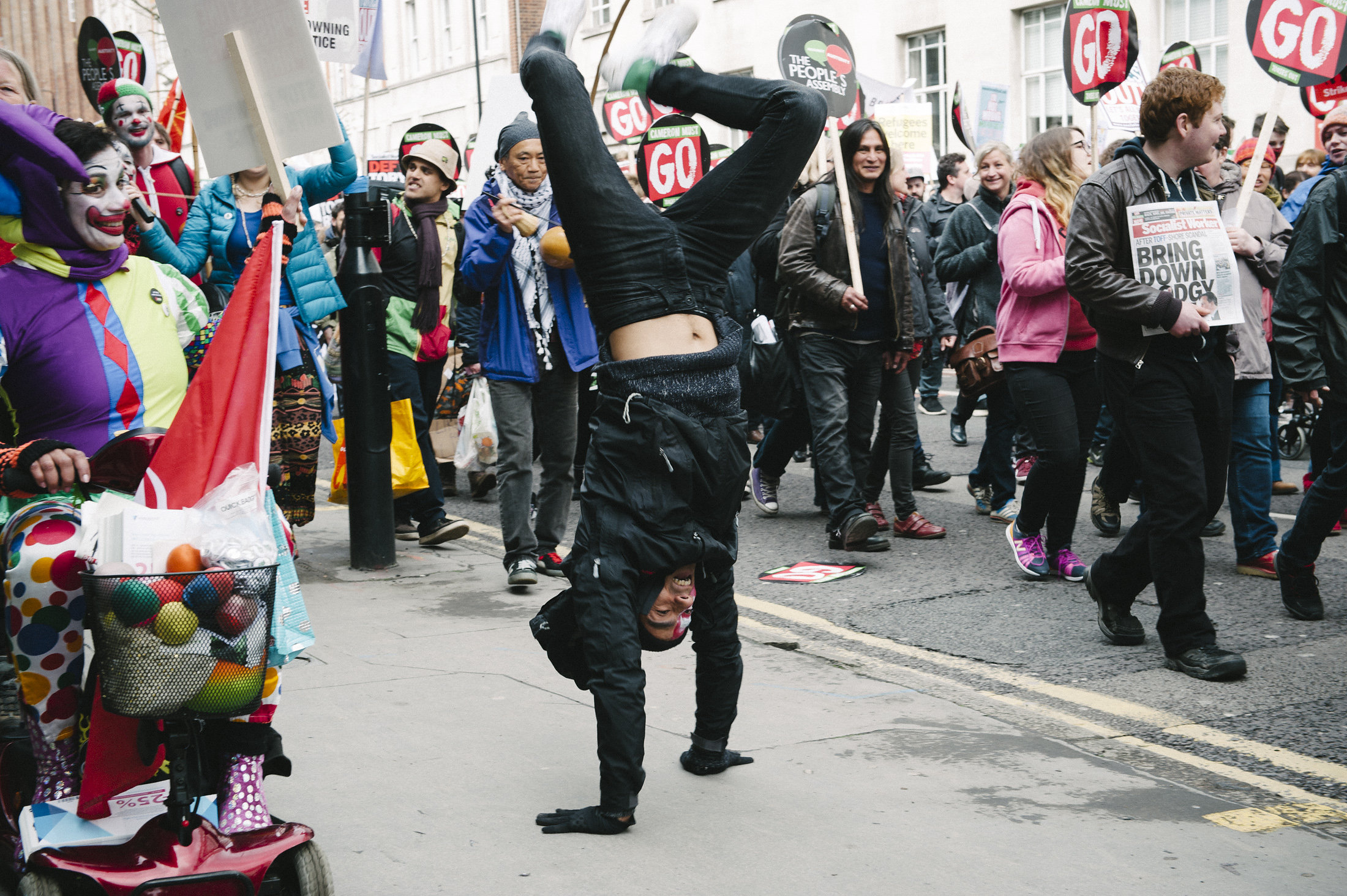 The march had been called under the banner of #4demands: health, homes, jobs and education – and it’s not hard to see why. Junior doctors are out on strike again later this month, as the bitter battle to keep the NHS safe for patients, and fair for doctors, wages on. Student nurses too have been taking action, ramping up their efforts to protect the bursary that makes nursing a viable and affordable profession to pursue. British schools are being forced to turn into academies, over 50% of Londoners can’t comfortably afford to pay the rent, the number of us working on insecure zero hour contracts is increasing, and they’re just the headlines from the last week. 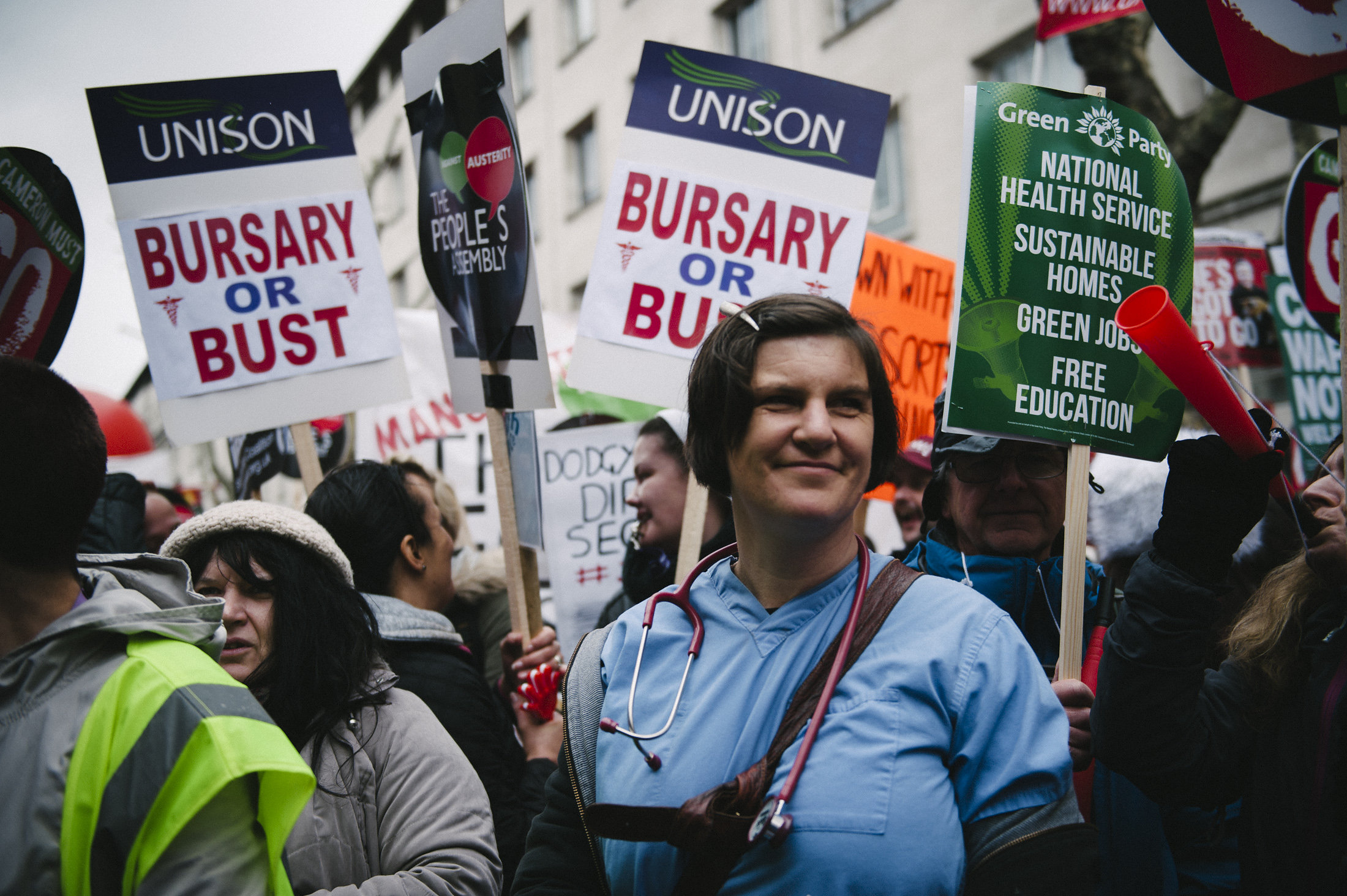 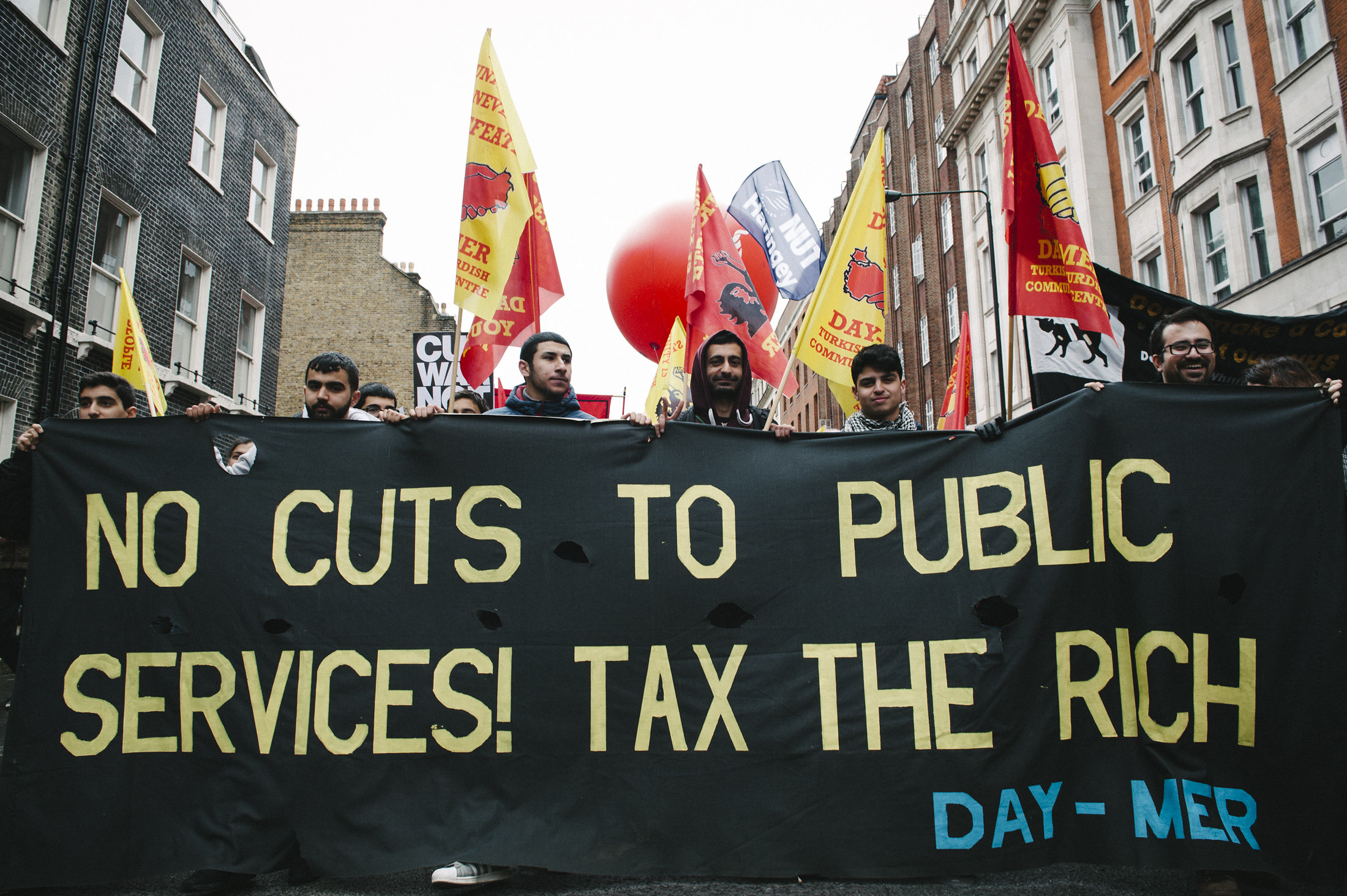 As the crowds started moving, making their way to Trafalgar Square, Jessie Easby explained why she’d headed down with her 2-year-old daughter. “We live on the Kennet and Avon Canal in Wiltshire, and we’re facing eviction from our boats.” 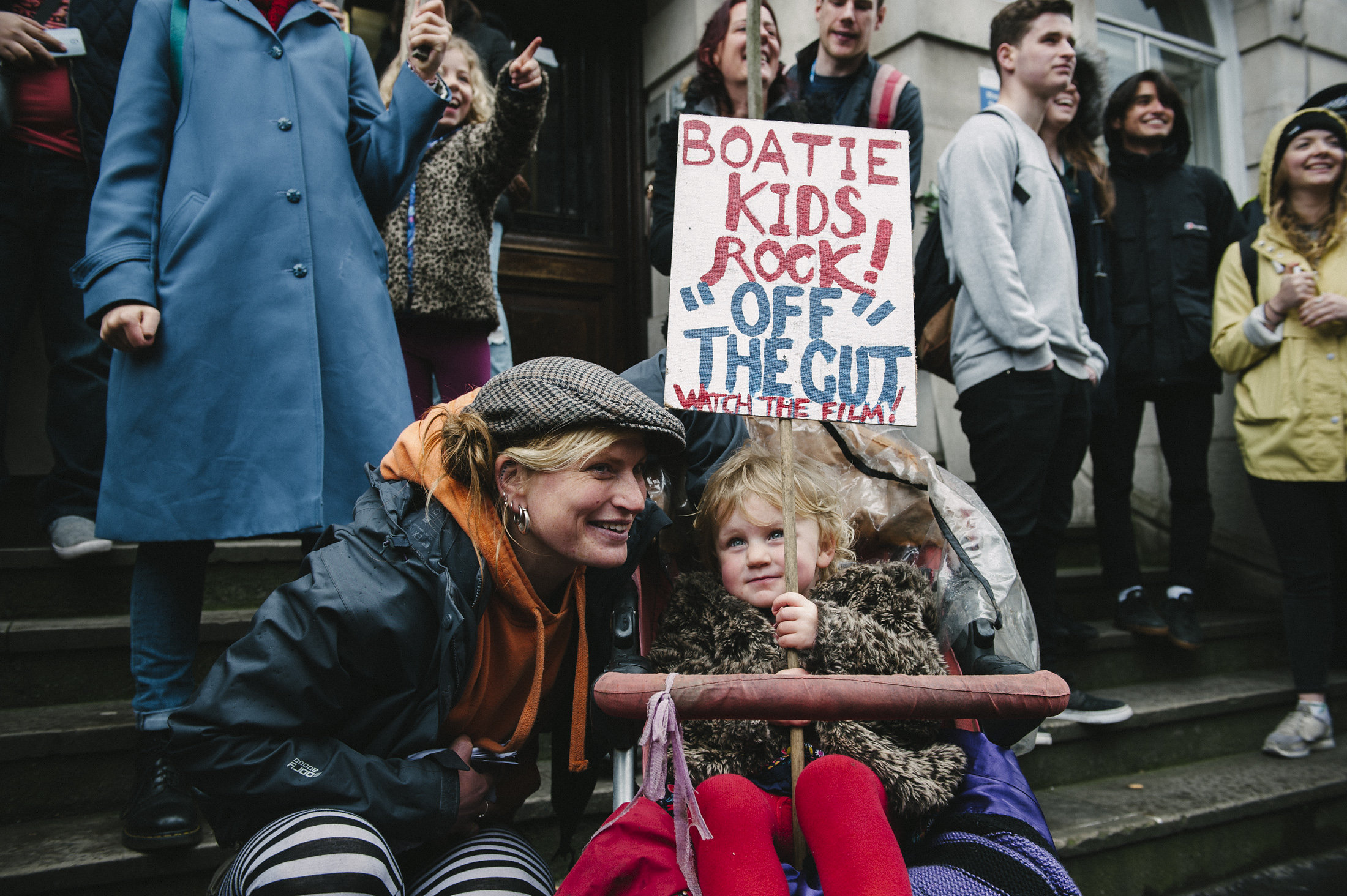 Despite trying their best to secure a future on their stretch of water, Jessie reckons the local government just want her out. “The law on this matter hasn’t changed, yet we are being harassed with threatening letters telling us to find alternative accommodation or they will destroy our boats if we don’t move on.”

They’re quest for secure accommodation was reflected in the concerns of nearly everyone we spoke to. 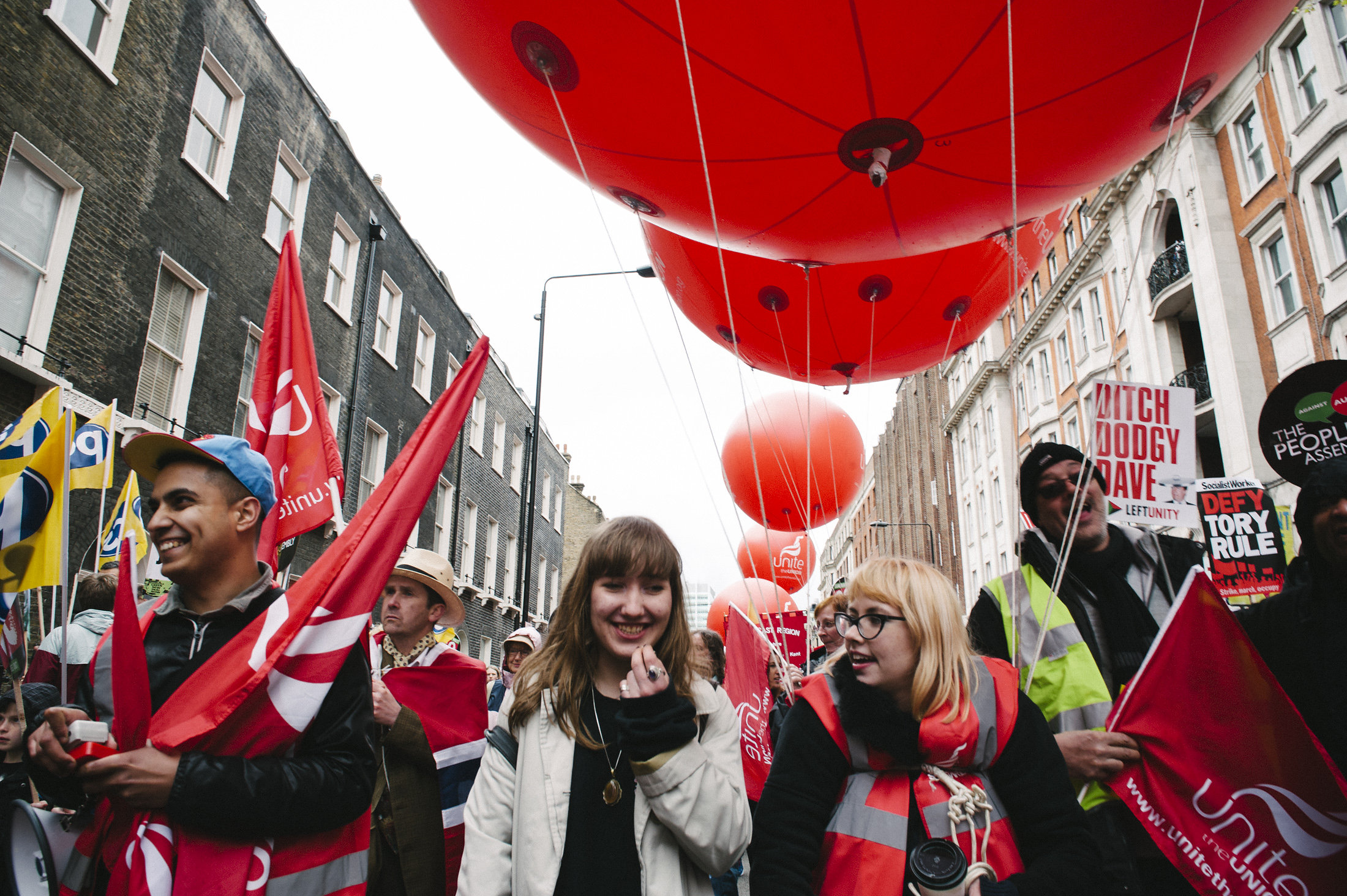 With the march making slow progress, the tell tale signs of a the anti-austerity protest were in full-swing: at first pissed off taxi drivers soon honked in support, confused looking Japanese tourists took pictures in the hope the gathering suggested the presence of the queen, men in suits muttered about the fact that none of the workers who showed up even bothered to go to work, and people made it perfectly clear the David Cameron pig scandal wasn’t going away any time soon. 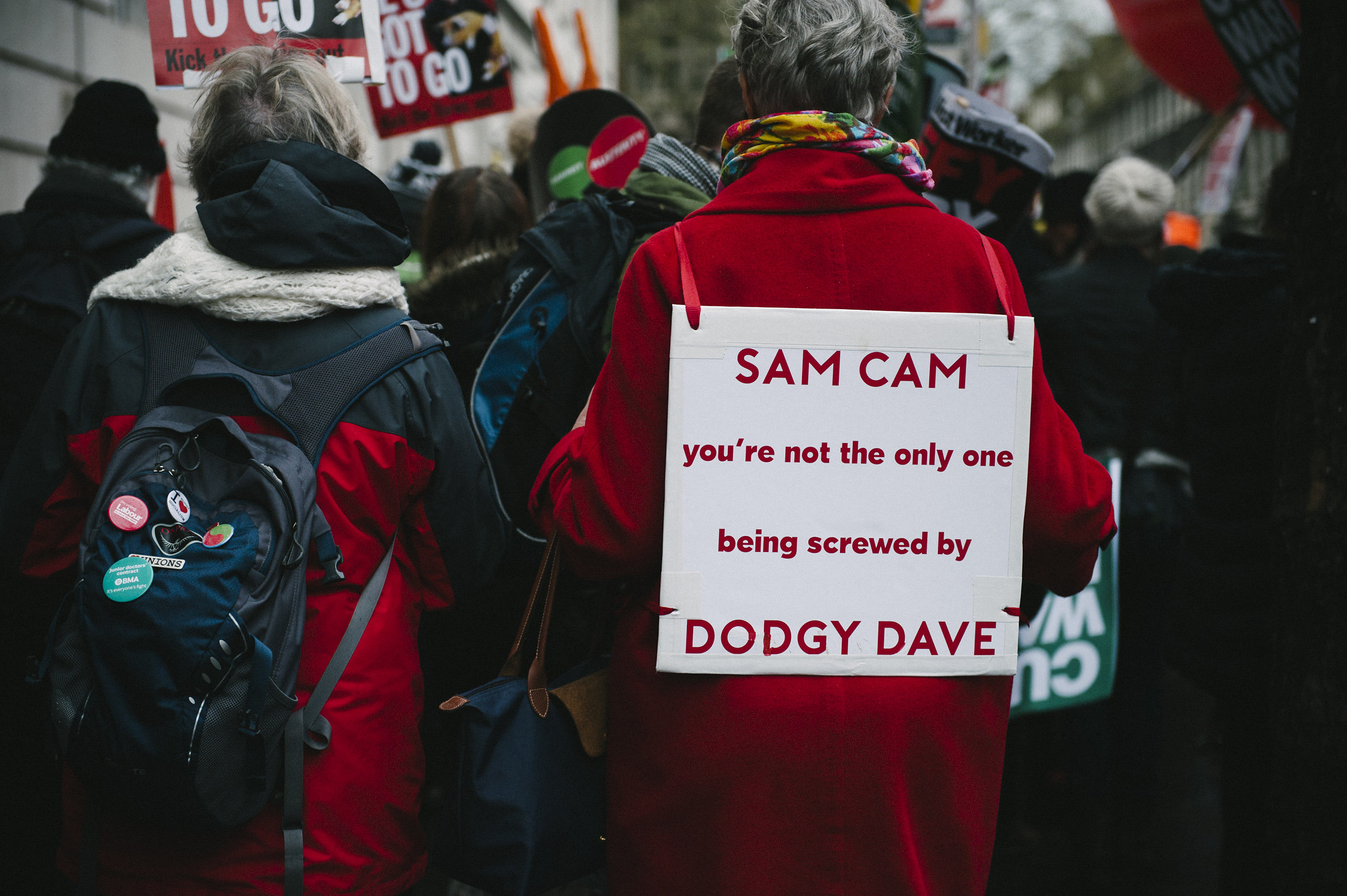 Up on stage the great and good from the British left took to the microphone, but a small group of protestors from anarchist activist group Class War decided that standing around in a group and clapping wasn’t quite the best use of their time. Breaking off from the group, a crowd of them darted towards property company Savill’s offices on St Margaret Street in Westminster. 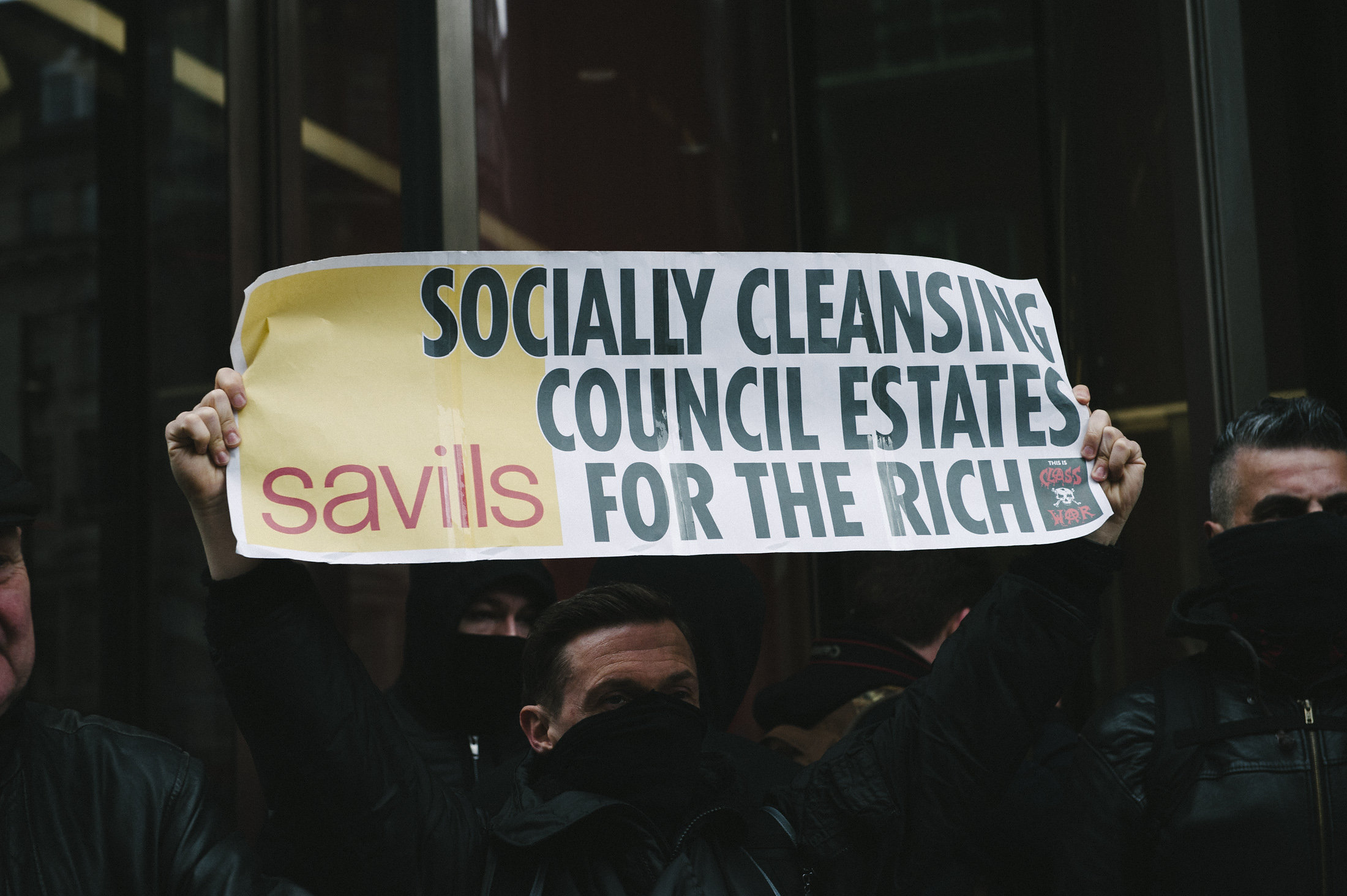 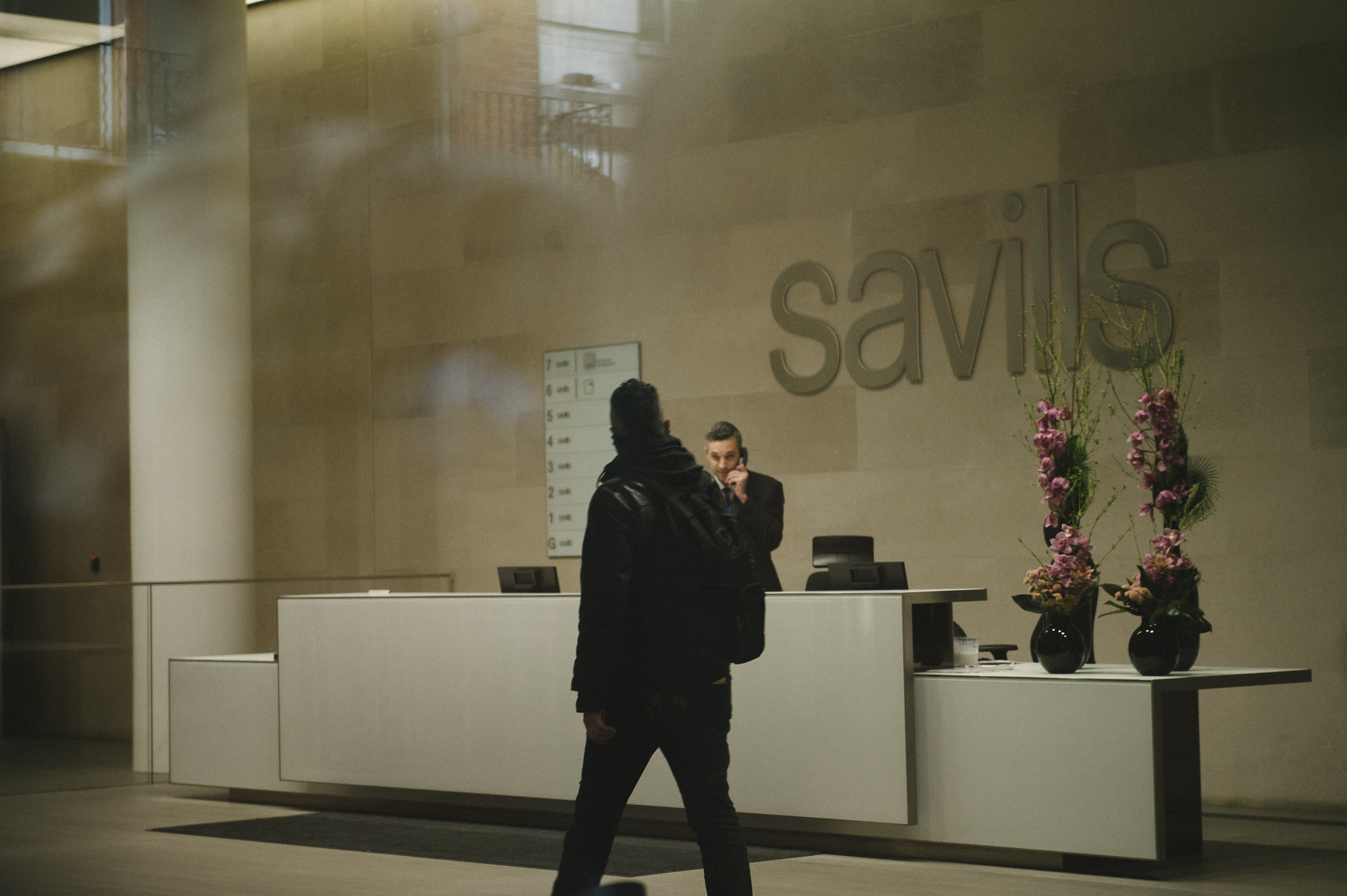 Here they protested outside, chanting about how shit Savill’s are, before briefly entering the building. 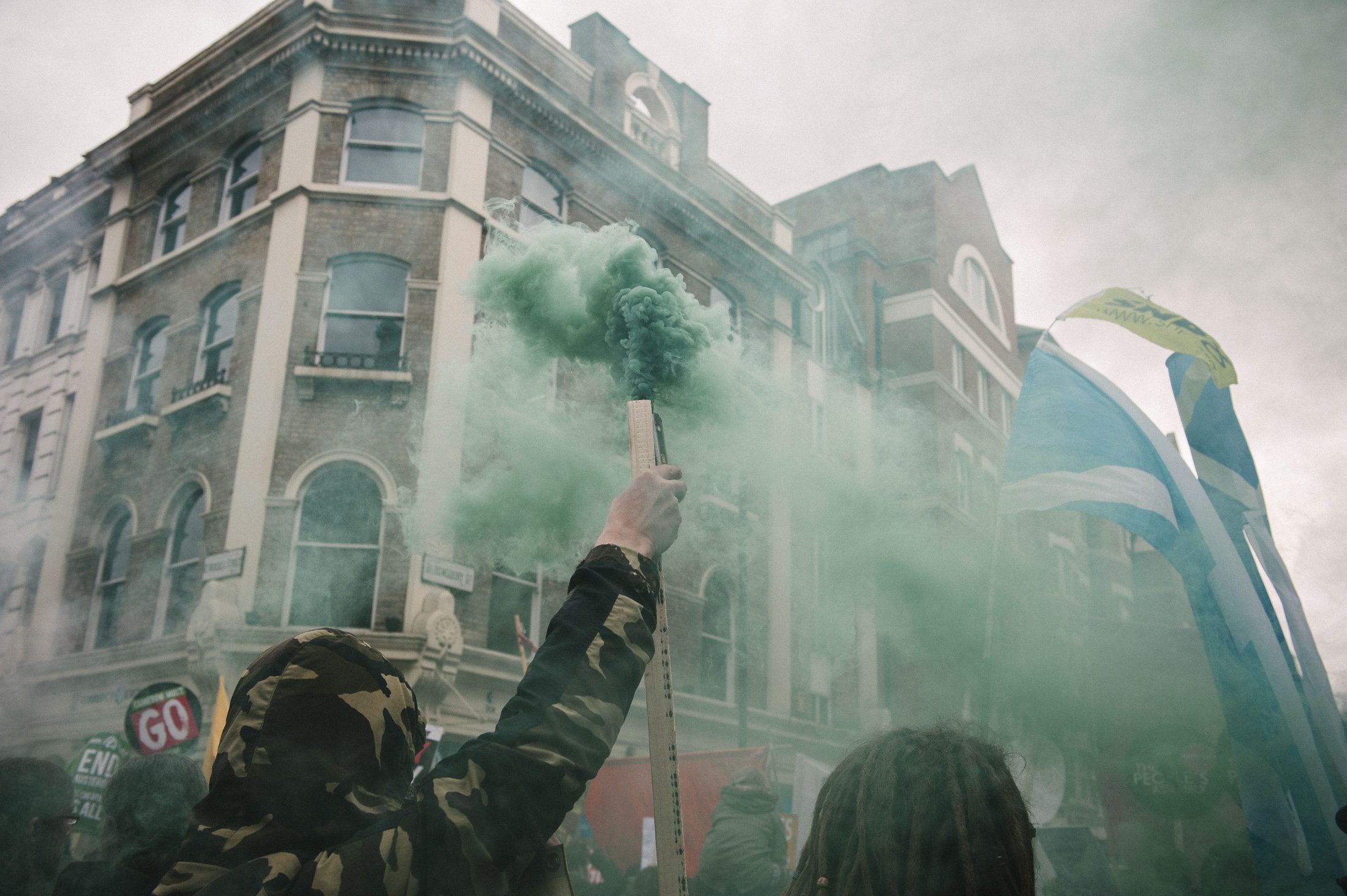 Back at Trafalgar Square John McDonnell MP, the Shadow Chancellor was addressing the crowd. “I’m here because I believe in a fair society, and I believe that David Cameronand the Tory government at the moment are creating a lot of problems for a lot of people”, Zak Jones explained. “There must be a new way ahead, a new way of fairness, a new way of transparency, a new way to care for people.” 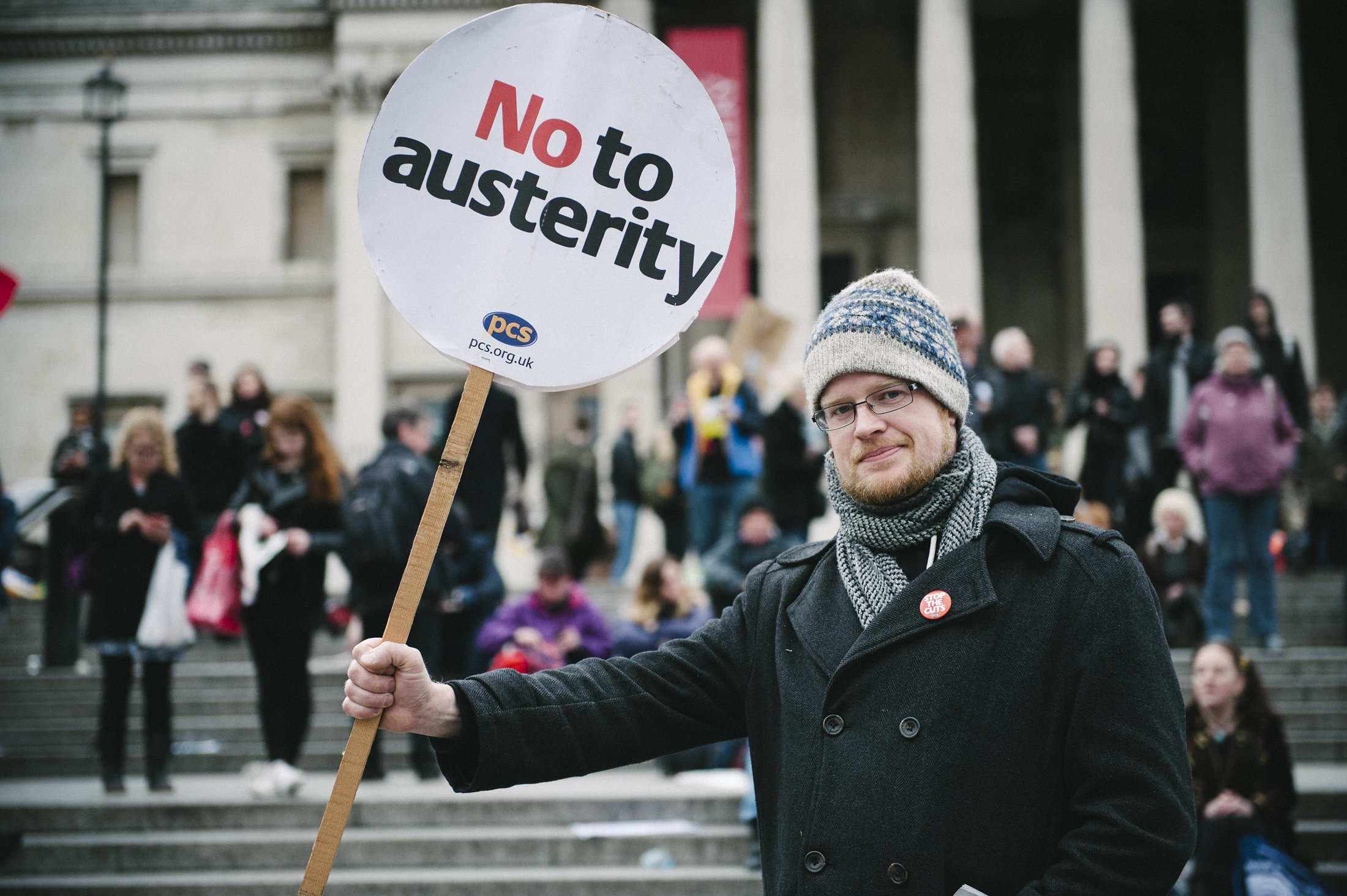 Zak’s vision for the future was cut somewhat short, as one protestor lobbed a bottle of tomato sauce at a line of bored looking cops. Pretty quickly he was being chased down by the boys in blue and arrested. Sure, it was an unconventional way to express anger at rising levels of inequality, a housing crisis that’s only getting worse, and a Prime Minister who has benefited from dodgy offshore trusts, but their was a shared sense of increasing frustration and urgency from the 150,000 strong crowd. 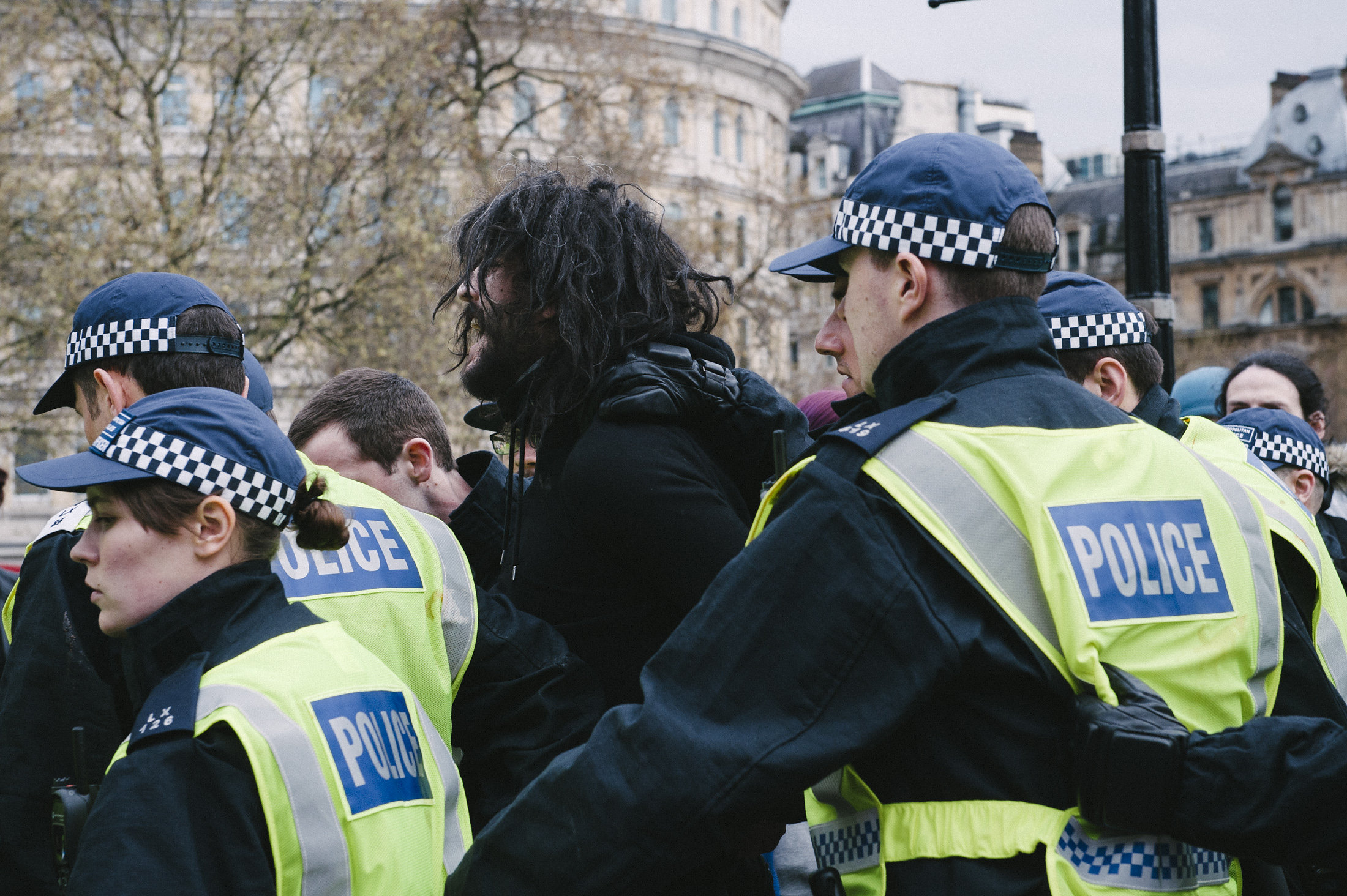 As people cheered the final speakers, turning to those around them to talk about what actions they might take in future, and how pissed-off they were that half of the Overground network was down for the weekend, Tim Doughty, who’d come along to show his support, explained why. 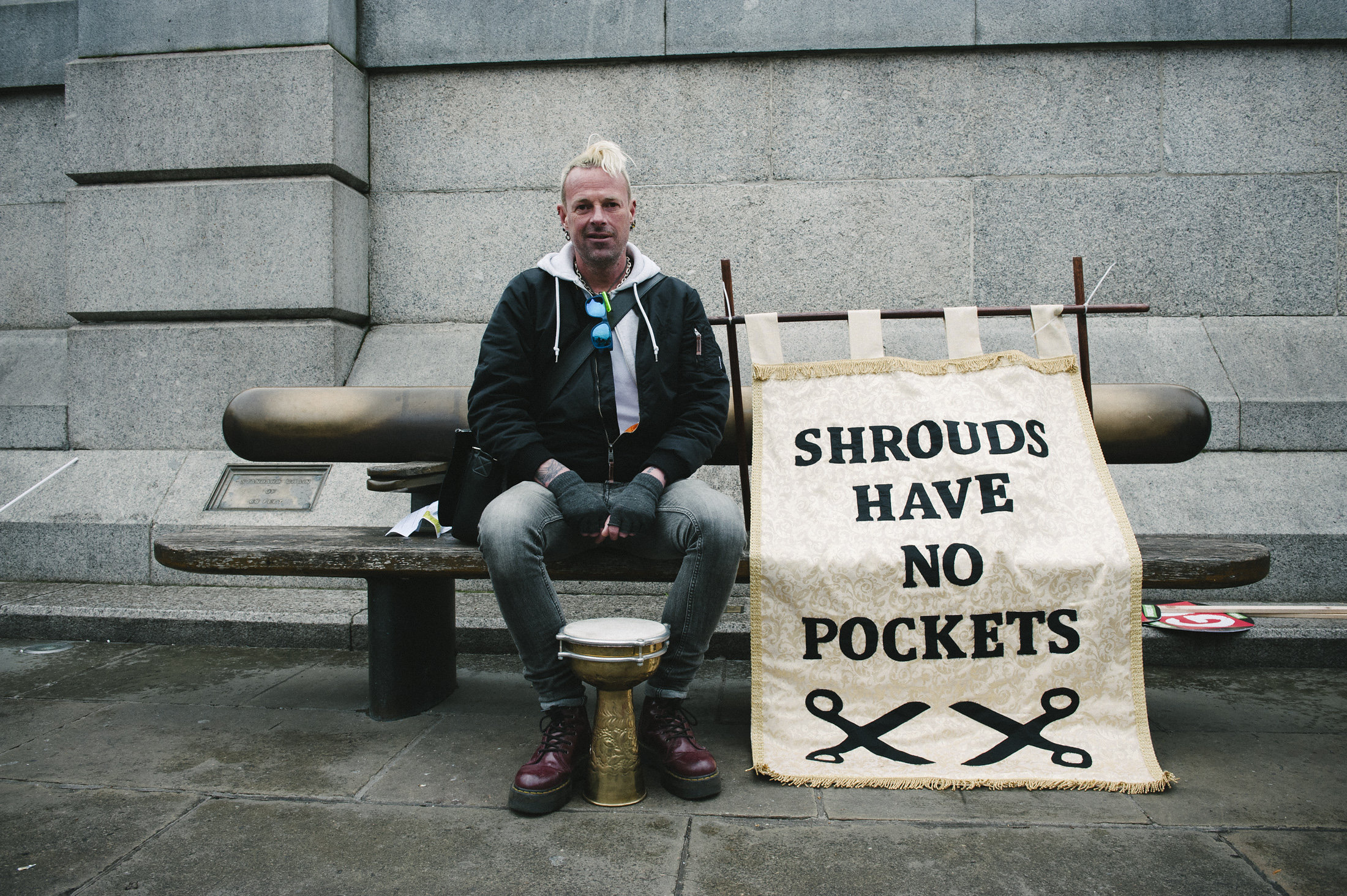 “What is going on with the Conservatives is ridiculous, the system is absolutely broken, everyday you can see that we are just being robbed. Austerity is just a system for stealing our money, our taxes are no longer going on the essential services, our taxes are basically being stolen to pay back the creditors”, he said. 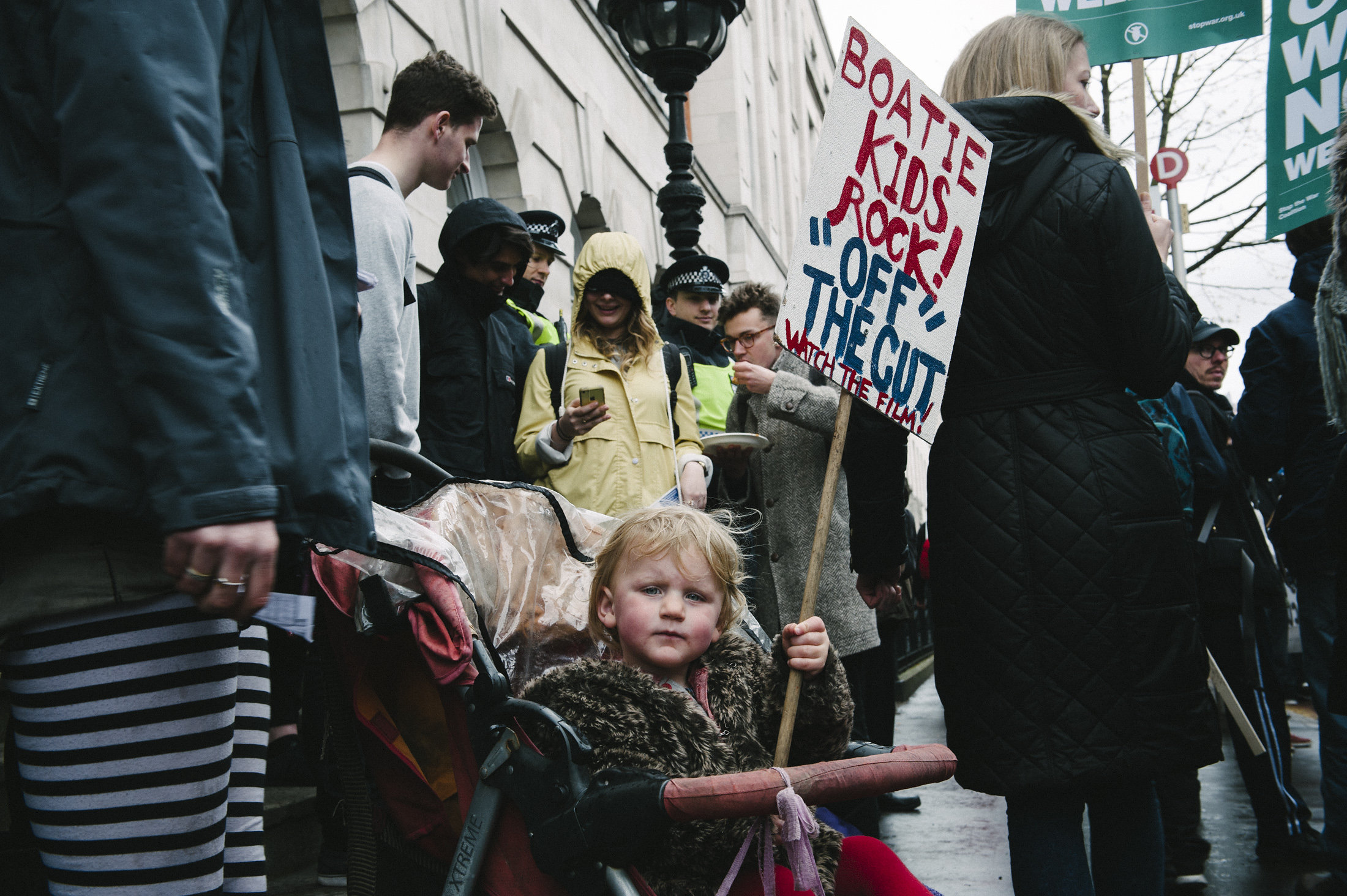 “The Tories have systematically sold everything, they sold the railways, the sold the NHS. They are killing it to make money for their mates, its just a big old boys club.”

Protestors promise these actions are only going to grow in numbers, and with David Cameron’s position already looking shaky, there’s potential for the movement to grow.

Linkedin
RELATED ARTICLES
OTHER ARTICLES
The author discusses the all-consuming nature of heartbreak, and turning the experience into an incisive exploration of love and loss.
50 years since its inception, and the campaign calling for recognition that capitalism depends on domestic labour is as pertinent as ever.
A new edition of a seminal book brings together iconic images of the band onstage in their full glory and backstage in moments of unguarded camaraderie.
Photographer Matthew Brookes recalls following a group of young people in Venice Beach living in search of the perfect wave.
Yesterday queer activist group Lesbians and Gays support the Migrants staged a die-in at the Pride in London parade to protest the inclusion of police in the march reports Huck politics editor Ben Smoke.
Freddie Miller’s new series of photographs investigates who today’s trainspotters are and what drives their unfettered enthusiasm.