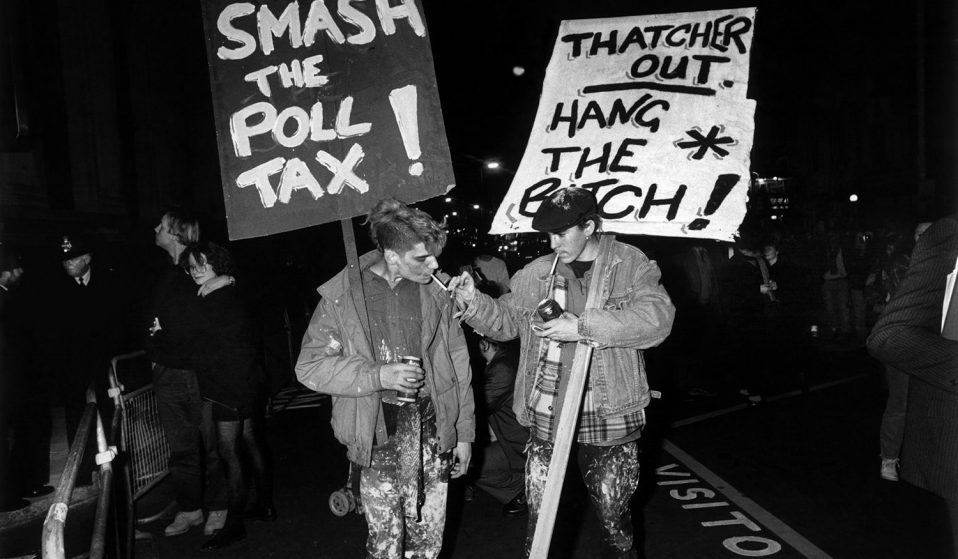 We look back at the mass non-payment movement that inspired the Don’t Pay campaign.

As a campaign calling on Britons to refuse payment of their energy bills this winter gains momentum, writer Ella Glover looks back at the victory of the mass non-payment movement that inspired it.

Last Saturday (1 October) saw thousands of protesters take to the streets to burn their energy bills as part of the Don’t Pay UK, a campaign encouraging people not to pay their energy bills this winter. This comes as energy bills rose by a record 54 per cent in April and further 27 per cent this month, pushing millions of people into destitution and fuel poverty.

While the campaign has not met its target of one million pledges – which it needed before it could ask people to take part in a mass-noncompliance campaign – 200,000 people have pledged to join the energy bills strike in a bid to force the government to make a change. The message behind the campaign is clear: the more people pledge, the safer – and more effective – the campaign will become. Don’t Pay has been likened to the Poll Tax Rebellion of the 1990s, when millions of people refused to pay an unfair tax leading to its abolition. Like energy bills, poll tax was a defining issue of the time – so how did it go down?

Poll Tax, which was officially called the Community Charge, was introduced by then prime minister Margaret Thatcher in Scotland in 1989, a year before it was brought in in England and Wales. The name ‘poll tax’ actually came from a tax that was brought in on peasants in 1360 and led to the eventual peasants’ revolt in the South of England. “We wanted to reflect back on the unfair nature of that tax,” recalls Barry Faulkner, a Liverpudlian trade union activist and organiser at the time. 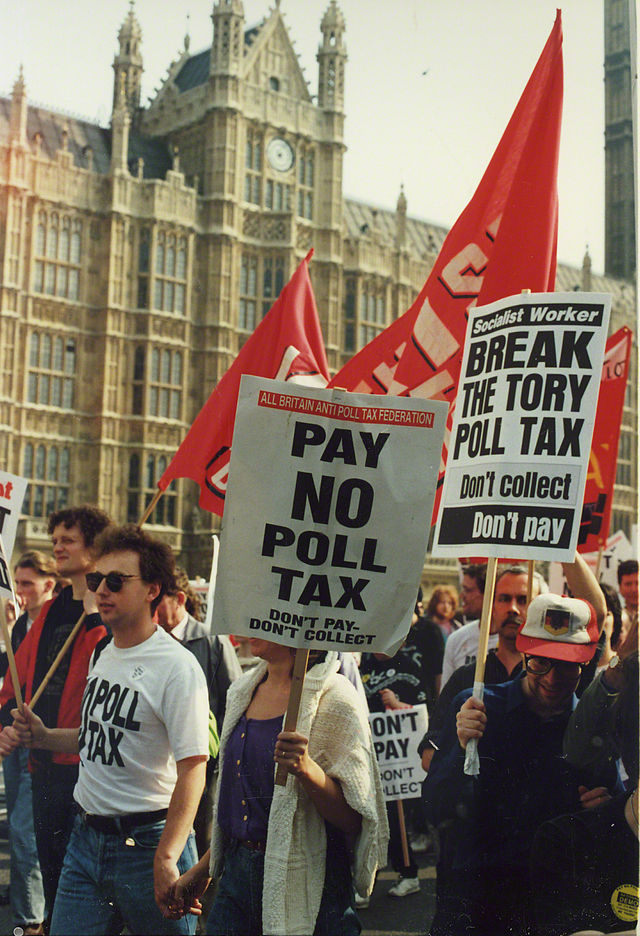 Thatcher’s poll tax provided for a single flat-rate, per-capita tax on every adult at a rate set by the local authority, regardless of where they lived and how many people they lived with. “It didn’t matter if you happened to be one person living in a huge eight-bedroom house, or one of six living in a three-bedroom house,” Barry tells Huck Magazine. “Effectively, you’d be paying more than the person who is living in that huge property.” This was a tax that benefited the rich. In fact, it was estimated that Thatcher’s family in Dulwich would save £2,300 a year while working-class people were smacked with a brand new bill.

The problem with the poll tax was that it impacted everyone. “The Thatcher government had originally planned on taking on one group of workers at a time, which had been pretty successful,” recalls Matt Foot, co-author of Charged: How the police try to suppress protest and an activist at the time. “She’d taken on the steelworkers, then the miners. But the poll tax was where Thatcher overreached herself, because she took on everyone at the same time.” This is why, when the tax was introduced in Scotland, around one million out of the country’s four million people, refused to pay – something which was replicated across the rest of the UK a year later.

“It was the campaign of mass nonpayment, really, which was the shifting point,” says Barry. “It wasn’t about just going on demos, it was about fundamentally saying, I’m not going to pay for this – end of story.” 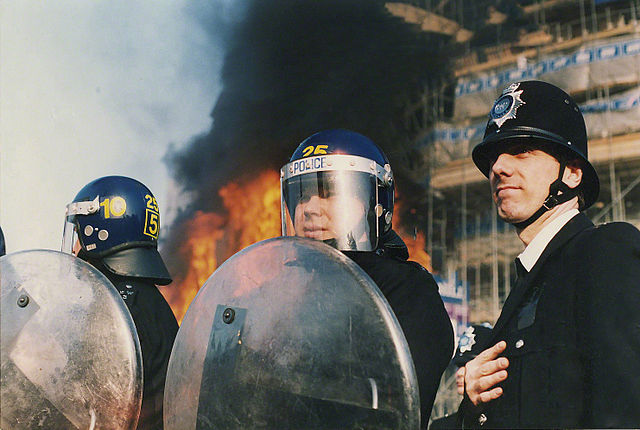 But with non-payment potentially resulting in imprisonment or a visit from the bailiffs, how were people persuaded to take such a risk? It all started with the Anti-Poll Tax Federation (The Fed), which was chaired by Scottish politician Tommy Sheridan. With no social media campaign or mobile phones and QR codes, it’s a wonder how any of this was able to pick up. But, as Glyn Robbins, who refused to pay poll tax at the time, recalls, the tax was “on the tip of everybody’s tongue”. Just like energy bills and the cost of living crisis, people were constantly talking about poll tax.

“Looking back, it was fairly amazing how much organising there was locally,” says Matt. While there were regional and local groups, such as in Hackney, there were smaller groups on estates and in different parts of communities. That was the thing about The Fed, says Barry: “It wasn’t just an amorphous national body that then told people how to do stuff. It was lots and lots of local anti-poll tax groups,” he says. “People came together in the backs of pubs or in community centres or even in people’s homes, and started to form small groups.”

Community organising played no small role. In Liverpool, Barry remembers holding public meetings in church halls and community centres and even holding “street meetings” on street corners. “I also remember being out in the streets and doing fly posting and some graffiti appeared as well, shall we say, around non-payment.” People also burned their poll tax books in protest. This organising was furthered by the Militant Tendency – a Trotskyist group within the Labour Party – whose role, Barry says, cannot be overstated. “The Militant was a huge organisation at the time and was the guiding force and power behind the Fed,” he says. “The controlling hand, if you like, was actually the Militant newspaper, without shadow of a doubt.” According to Barry, poll tax was on the front page of every issue of Militant, which is how the message was able to spread so widely. 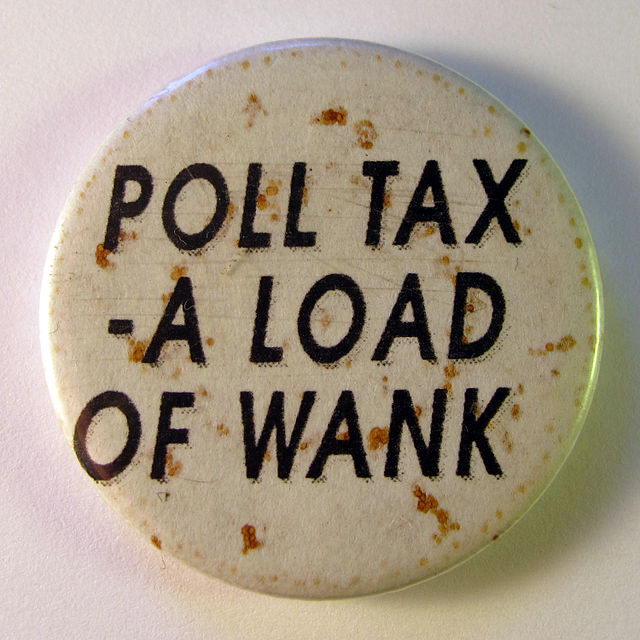 Popular culture also played a big role. Barry worked with a record label that released an album called The Rise Of The Phoenix – Artists Against The Poll Tax, which featured music from brands like The Proclaimers, The Levellers, Beats International and other artists. The cover art was designed by Jamie Ried, who had previously worked with the Sex Pistols. “I’ve always found that using culture – whether it’s music, poetry, arts, whatever – is a very powerful way of spreading messages because it grabs people’s hearts as well as their minds, and I think that’s important in any campaign,” says Barry.

All in all, the sense of community was the most vital aspect of the anti-poll tax campaign, particularly the campaign for non-compliance. “It seemed to me that the vast majority of people you’d meet and talk to were absolutely opposed to the tax, even if they weren’t actively doing stuff,” says Barry. “Most people actually really do hate unfairness and injustice, even if it’s not towards them.” And the more people who refused to pay, the safer it was to join in. “There were some people who were more cautious about the whole question of non-compliance,” says Glyn. “What we said was that, ‘the more of us there are, the safer it becomes, and the more powerful this movement becomes’.”

The leading slogan of the campaign was “don’t pay, don’t collect,” and, across the country, millions of people refused to pay their poll tax, including one Labour MP, Terry Fields, who actually went to prison for not paying. Glyn says he has two judgements against him, both in Sheffield and London. “I went to court in London [for non-compliance], and I remember it very well because there were at least 100 people there for the same reason. There was some sense of solidarity in that respect.” 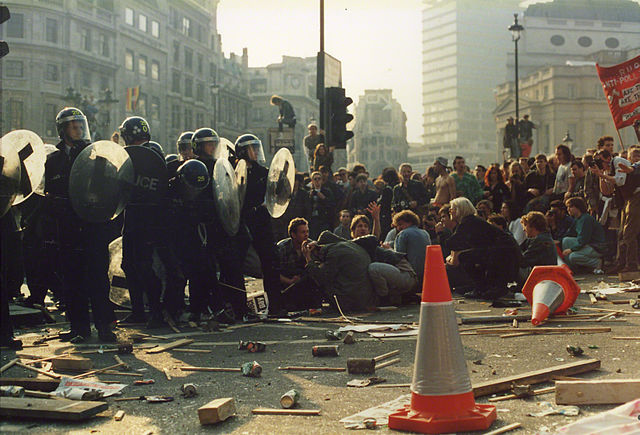 Glyn wasn’t alone: hundreds of thousands of people were taken to court and many were charged, so activists had to step up. “It all sort of got really tough when the Council started chasing people who hadn’t paid and started taking them to court,” he recalls. “Then we went into a different mode, so a lot of the activists became what we call McKenzie Friends – a non-legal representative who can represent someone in a magistrate’s court and effectively support them through the process.”

Barry and many other activists would enter into the courts with the people who’d been charged and argue against the unfair nature of the tax. For most people, though, not paying poll tax was not a political statement, but something they had to do out of necessity, because they simply couldn’t afford to pay. “It was, ‘I cannot pay this so I won’t pay’,” says Glyn. “I think that was very powerful.”

As well as court cases and jail sentences, councils employed bailiffs to retrieve what was owed. Again, campaigners had to step up. “I was quite heavily involved in actually stopping the bailiffs,” says Barry. “So, when councils employed bailiffs to come in and start trying to take people’s stuff away, those local groups actually formed defence committees and stopped bailiffs going into many areas, so we’re able to stop them.” Once Barry and some other campaigners occupied the bailiffs offices in Liverpool – “it was quite a turnaround,” he says – and this sort of thing was happening all over the UK. 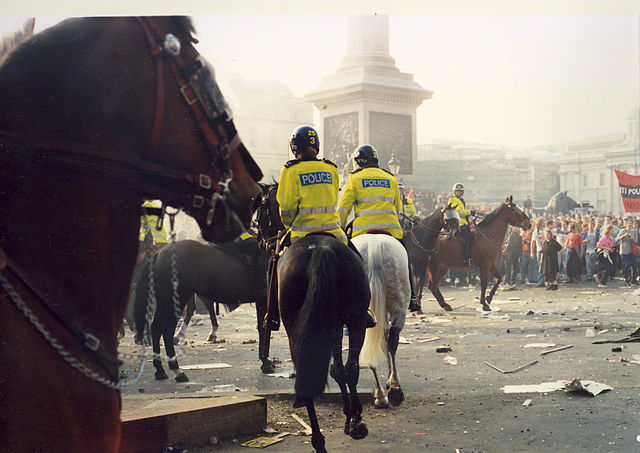 Thankfully, Glyn was never charged for non-payment. “I assume that was because the bureaucracy just couldn’t keep up with the level of nonpayment and also the whole thing just lost all credibility.” Between 1993 and 1994, The Independent reported that 1,100 people had been sentenced to jail for not paying poll tax. At the time £1.75 billion remained unpaid, and it was costing town halls more to collect the tax than to collect refuse. In fact, the paper reported that the cost of keeping non-payers in jail was often far greater than the poll tax they owed.

At the end of the day, it was mass nonpayment that led to the tax being abolished and, eventually, the downfall of the Thatcher government. Following a mass protest in London in 1990, which devolved into riots, the Labour Party took a vast 23 point lead in the polls. Later that year, Thatcher was challenged by Michael Heseltine and, although she won, she narrowly missed the threshold to avoid a second vote. In November 1990, Thatcher resigned and her successor, John Major, replaced the poll tax.

“I was pretty clear, in my own mind, that, ultimately, the only way we were going to stop the poll tax was by not paying,” says Glyn. “There were a lot of people around me who didn’t agree with that, but, obviously, there were millions of people who did agree with me. And then obviously, that led to both the tax going and Margaret Thatcher going as well.”

Linkedin
RELATED ARTICLES
OTHER ARTICLES
Following the release of their third album, the duo talk collaboration, family and connecting with the dead.
The hate Just Stop Oil faced after throwing soup over a Van Gough painting has been immense. Here, they explain why it won’t deter them.
We catch up with the singer in her London studio to connect the dots between music, painting and her relationship with the city.
Jamel Shabazz’s photos honour those who were lost and those who survived one of the most brutal eras in recent history.
After being subject to racism growing up, Kavi Pujara’s photo series allowed him to reconnect with and reimagine his hometown.
Photographer Ira Lapu documents the lives of ordinary Ukrainians living amid a brutal conflict.