News & Politics / Activism / The protestors battling to save Ryebank Fields 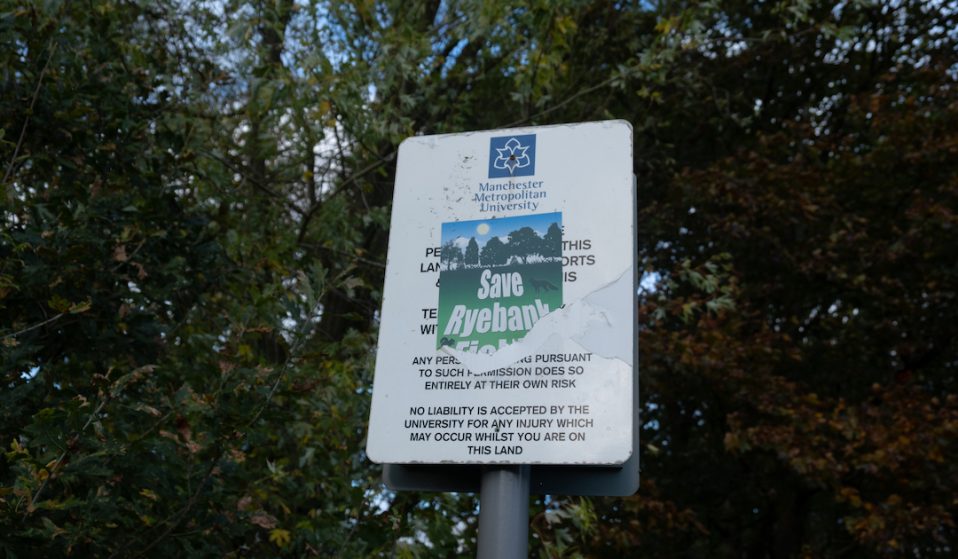 Campaigners who’ve set up a protest camp in Ryebank Fields are calling for an end to plans to sell the land for development.

Campaigners who’ve set up a protest camp in Ryebank Fields are calling for Manchester Metropolitan University to put an end to their plans to sell the land for development.

Cycling along the streets around Ryebank Fields in Chorlton, Manchester, you’d be hard-pressed to spot any house without a ‘Save Ryebank Fields’ poster in the window. The fields, which were given to Manchester Metropolitan University (MMU) by Manchester City Council in the 1970s, are under threat of development. Previously a sports fields, Ryebank Fields were abandoned by the University in the 1990s, allowing them to rewild and for nature to flourish in this little pocket of countryside in Manchester.

While no planning application has been submitted yet, local campaigners tell Huck that MMU is planning to build 120 executive homes in the area. A road will run through the fields, destroying a well-loved piece of wilderness in the heart of Chorlton, one of Manchester’s up-and-coming neighbourhoods.

Now, local groups and climate activists are banding together to fight to save Ryebank Fields. The story isn’t a new one: one local, Bernadette, was part of the first campaign to save the fields in 1996, which led to the planning application – and a later appeal – being rejected. 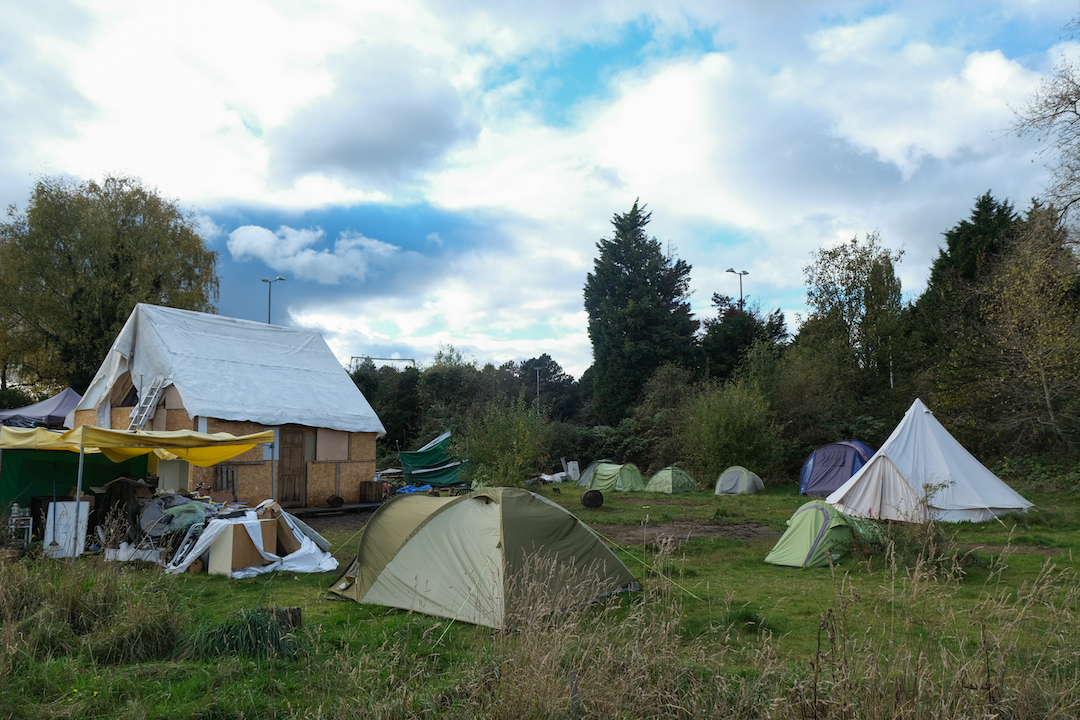 Friends of Ryebank Fields, a local group set up to protect the land, has been campaigning to save Ryebank Fields since 2017. Other groups involved in the campaign include Friends of Longford Park, Rye Bank Road Residents Association and, now, Ryebank Community Camp, set up by activists from Extinction Rebellion (XR) and Animal Rebellion (AR).

Activists set up the camp on 26 April 2021, the anniversary of the Kinder Trespass, and have taken turns to camp there every night since, with some activists camping on over 100 nights. Using donations and discarded materials, the camp has built two large structures, a small tower at the entrance of the field and a two-storey straw bale house, out of wood.

Campaigners heard that MMU was planning to appoint developers in May or June. “We wanted to send a signal,” says Paul, an activist and agricultural economist involved with the campaign. “And true enough, while we could never say they’ve not appointed them yet because of the camp, it didn’t happen.” Locals tell Huck that they think the camp is the main reason developers haven’t already fenced off the site.

While nobody wants the camp to be a permanent feature, the logic with the two structures is that it will reduce the human footprint of the camp by keeping the fields from being damaged. And, evicting people from tall, semi-permanent accommodation is difficult: both legally and physically. 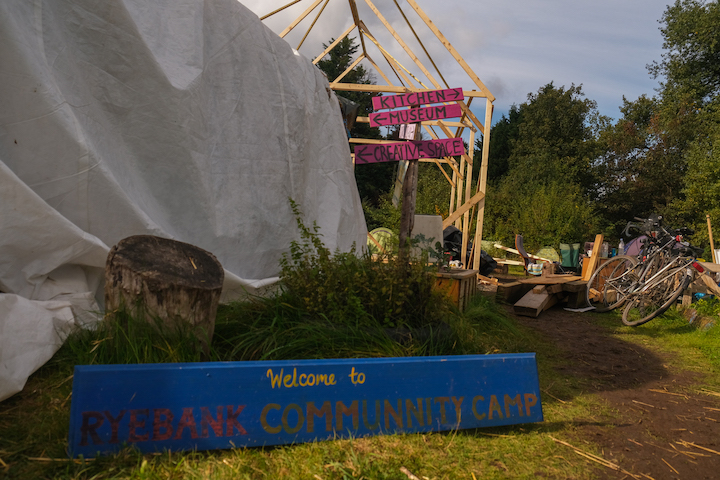 They will also serve to keep campers dry and warm in winter. Stephen, an XR activist who has been camping on the fields sporadically since April, tells Huck: “Clearly, [MMU is] hoping that, when it gets cold, we’ll all just get fed up and go home, because camping isn’t that great in winter, and tents aren’t that great for living in long-term.” So far, this has proven not to be the case, with activists still camping out each night, although, Stephen says, numbers have dwindled slightly with campers heading to Glasgow for COP26.

He adds that XR Manchester is also hoping to use the camp to expose the fact that MMU, which won the Green Gown Award in 2020, “claims to be one of the greenest universities around, but that claim rings hollow when you consider how little they value a piece of wilderness that they actually own”.

A major concern for local residents is that asbestos was found under the soil. It likely came from old Anderson shelters which were dumped into the two abandoned clay pits that once dominated the fields. Rosie, who lives on Rye Bank Road, right next to the fields, tells Huck: “This land is totally safe for us because everything’s underground, and we know that if it’s not disturbed, it will stay safe. As soon as they start digging… who knows what’s going to be brought down our roads by them [the developers] and released into the air.” 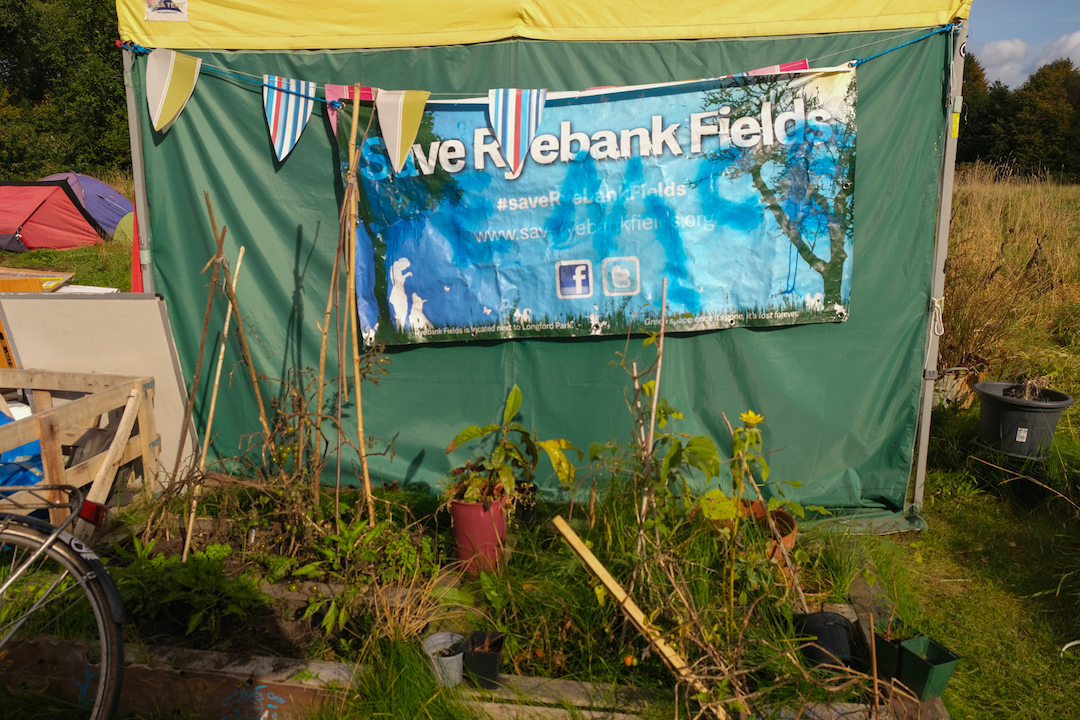 At Ryebank, there is a biodiverse ecosystem home to various wildlife and indicators of ancient woodland. “We have an extremely rare Manchester Black Poplar Tree and a number of millennium oak trees, planted by a local resident in the year 2000,” Tara, of Friends of Ryebank Fields, says. “We also have wild garlic, which is an ancient woodland indicator, so are the native bluebells and the aspen grove.” Aspen groves are great for carbon capture, she adds. Walking around the fields, Tara also points out part of the Nico Ditch, a six-mile-long ditch thought to be a boundary marker dug between the 5th and 11th century.

More than being rich with history, culture and biodiversity, the fields are a vital community asset. “It’s a really great place to bring people together,” says Bernadette. “You can come here for peace and quiet, but there’s also always someone to talk to. In lockdown, the fields became such a great resource for meeting people at a safe distance. I’ve spent a lot of my life here, and it’s a really important part of my neighbourhood.”

According to Paul, development on the fields may also increase the already high risk of flooding in the area and increase air pollution in an area that already sees a high volume of traffic. “Not to mention Manchester has declared a climate and ecological emergency,” he says. “So why on earth don’t we actually act as though our house is on fire and stop the nonsense of trashing green space? Manchester City Council has targets for the number of trees that they want to plant, but there are 1400 trees on Ryebank Fields which somehow aren’t important.”

A Manchester council spokesperson said: “The Rye Bank Road development framework has been developed by landowner, Manchester Metropolitan University (MMU). At this time, no planning application has been submitted for consideration.

“Any future application would have to be assessed against and having regard to both national and local planning policy and would be subject to further consultation with local residents.”

An MMU spokesperson said: “The development will not result in the widespread destruction of trees. It will preserve the trees on the boundary with Longford Park and enhance the relationship between the park and the Ryebank Fields site. The development will deliver a net biodiversity gain. 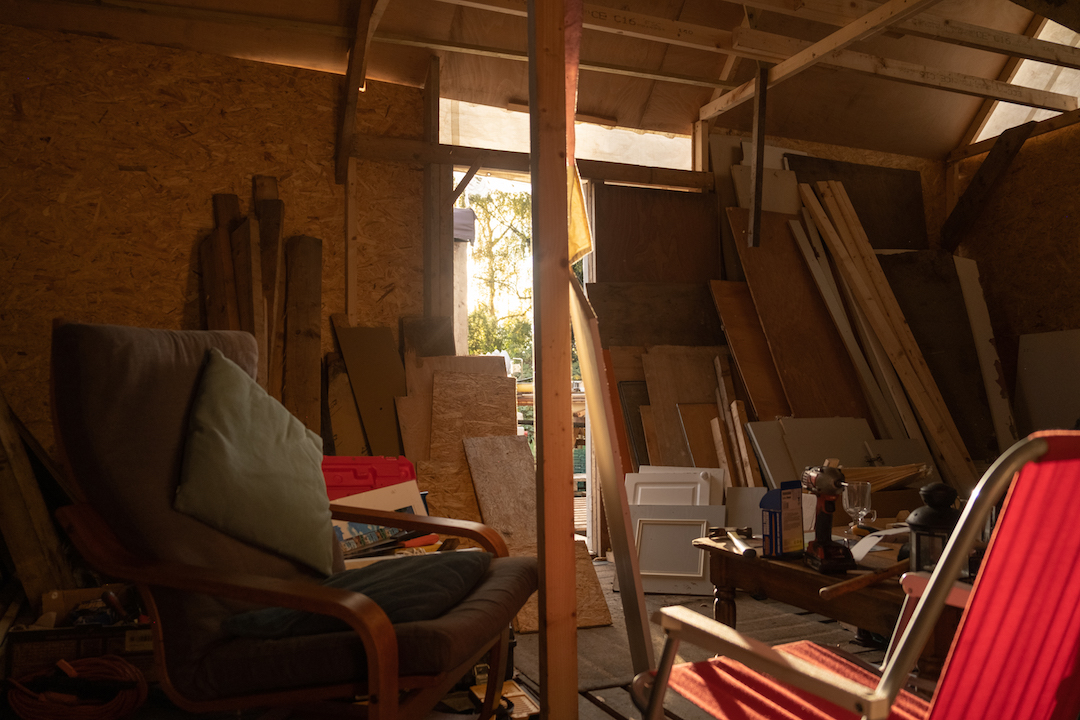 Inside one of the structures at Ryebank Fields

“Surveys conducted for the University indicate that some of the backfill materials are potentially hazardous. Initially, they appeared to be at a depth that would not pose an immediate risk to the public. However, surface level asbestos was found in different locations across the whole site. The vast majority of this asbestos has been unearthed due to surface erosion.

“The site was cleared of surface asbestos when it was first identified. As long as the soil is undisturbed, the airborne risk is well below recommended safety levels.”

MMU closed the fields to the public to avoid “any further erosion and…the exposure of any more asbestos.” However, it says it has “been advised that the site is capable of being remediated and can be safely developed for housing.”

But this fight is about more than just Ryebank Fields. The government has a target to protect at least 30 per cent of UK land to boost biodiversity by 2030, yet a UN report from last year found that the UK failed to meet 17 out of the 20 international targets set to reverse nature loss by 2020.

“I think it’s so important that we hold on to our green spaces,” says Rosie. “For our mental health, for our planet, we need spaces like this, and to have them taken away by a university that suggests they’re green just seems ridiculous.”

Stephen makes the point that we are living in the sixth mass extinction of species on the planet: “By protecting this field, we’re giving species in the UK a fighting chance of survival. We need to have habitats like this, where, unlike man made parks, plants and animals are just left alone to do what they want and thrive.”

For Paul, saving Ryebank Fields is just a smaller piece of a bigger picture. “Land is a fundamental human right, and Ryebank Fields should be for everyone,” he says. “Let’s be honest, in Chorlton, it’s very hard for us to save the Amazon, but we can do our own little bit for climate change and ecological emergency right here – we can save Ryebank Fields.”

Linkedin
RELATED ARTICLES
OTHER ARTICLES
With their latest capsule collection, SCRT have constructed their own mythology, based on the story of a fictional meteor shower that hit a small Scottish town.
Following the release of his latest album God Don’t Make Mistakes, the rapper talks horror villains, police brutality and being unafraid to show his vulnerable side.
Shifting the focus from the cost of living crisis to tackling obesity while many starve or freeze is farcical and pointless, writes Fatzine founder Gina Tonic.
A group of Ukrainians living in Poland are helping Ukraine withstand Russia’s brutal invasion by buying supplies and shipping them directly to the war’s frontlines.
Following the release of his newly republished 1991 book, Redheads, the American photographer reflects on his celebration of ginger people and their magnetic power.
Writers Matt Foot and Morag Livingstone explore how four decades of collusion between the government and the police have slowly eroded our right to protest.