News & Politics / Activism / ‘Information should be clear, accurate and accessible to all’ 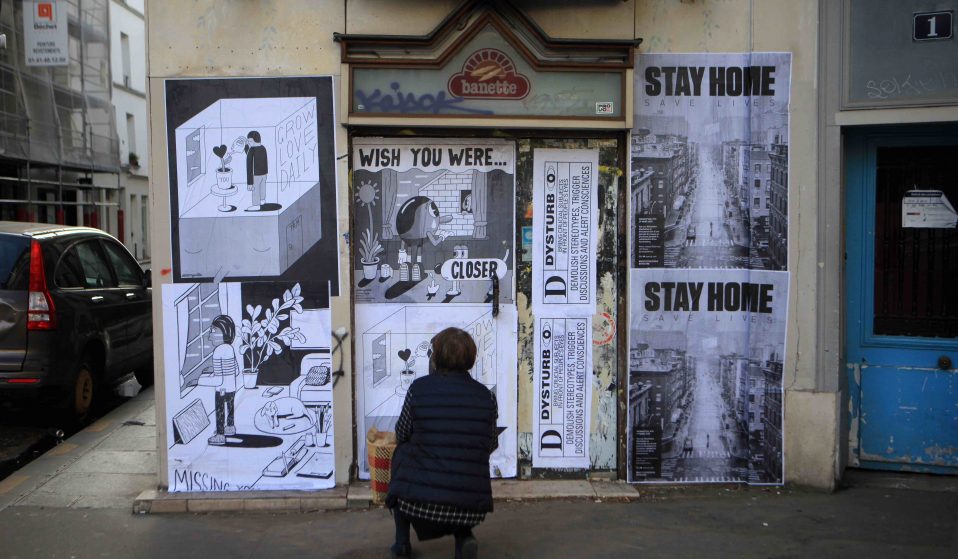 The Dysturb Collective use street art and photography to deliver COVID-19 information that reaches beyond the mainstream bubble.

The Dysturb Collective use street art and photography to deliver COVID-19 information that reaches beyond the mainstream bubble.

Dysturb Collective emerged out of the need for stories to be seen. Often locked away behind paywalls, inside magazines or lost within the incessant chattering of media elites, key stories were being missed by huge chunks of the population. The Dysturb solution? To stick them up on the walls of densely populated cities like Paris, London, New York and beyond.

Dysturb, a collective of photographers, war journalists and artists, have been using urban spaces to tackle the world’s biggest issues since 2014. Campaigns such as #Reframeclimate and #WomenMatter have made an impact on both sides of the Atlantic, with the group pasting more that 2000 posters around the world, and giving media literacy workshops to more than 10,000 students. And when COVID-19 first hit, they of course jumped on it to offer an alternative take on the crisis. Dysturb co-founder Pierre Terdjman tells us more.

Dysturb are currently engaged in a “stay at home/save lives” information campaign through urban displays of large-format images by well-known photographers. Can you tell us more about your response to the crisis?
Dysturb Collective: The idea behind the COVID-19 campaign is to combine information, awareness and prevention. As the streets are left by advertisers, we wanted to keep pasting and being present in areas where people with less access to news or education could get some awareness of the situation.

We also wanted to highlight the role of essential workers; the ones at the centre of the crisis. We always give context with facts, so we managed to fact-check some numbers and gather some information so people can easily access it. These days, when you turn on your TV on news networks (if you don’t, keep it that way), all you see is commentary and analyses. Sometimes it’s very hard to find simple and understandable information. We’ve been working for many years now to bring back simple, fact-checked information that is accessible.

We have pasted in Paris and New York, but also in other cities in the coming weeks, including Nairobi, Seattle and the San Francisco Bay Area. The campaign presents the work of photographers documenting the health crisis in different countries. So far, Dysturb has pasted images by Ashley Gilbertson, Nina Berman, Ismail Ferdous and Gaia Squarci taken in the United States; Oscar B. Castillo in Venezuela; Fabio Bucciarelli in Italy; Nichole Sobecki in Kenya; Laurence Geai and Hugo Aymar in France. These photographs are accompanied by captions, with facts on the impact of COVID-19 and reminders on safety measures. The goal is to encourage the public to remain vigilant. 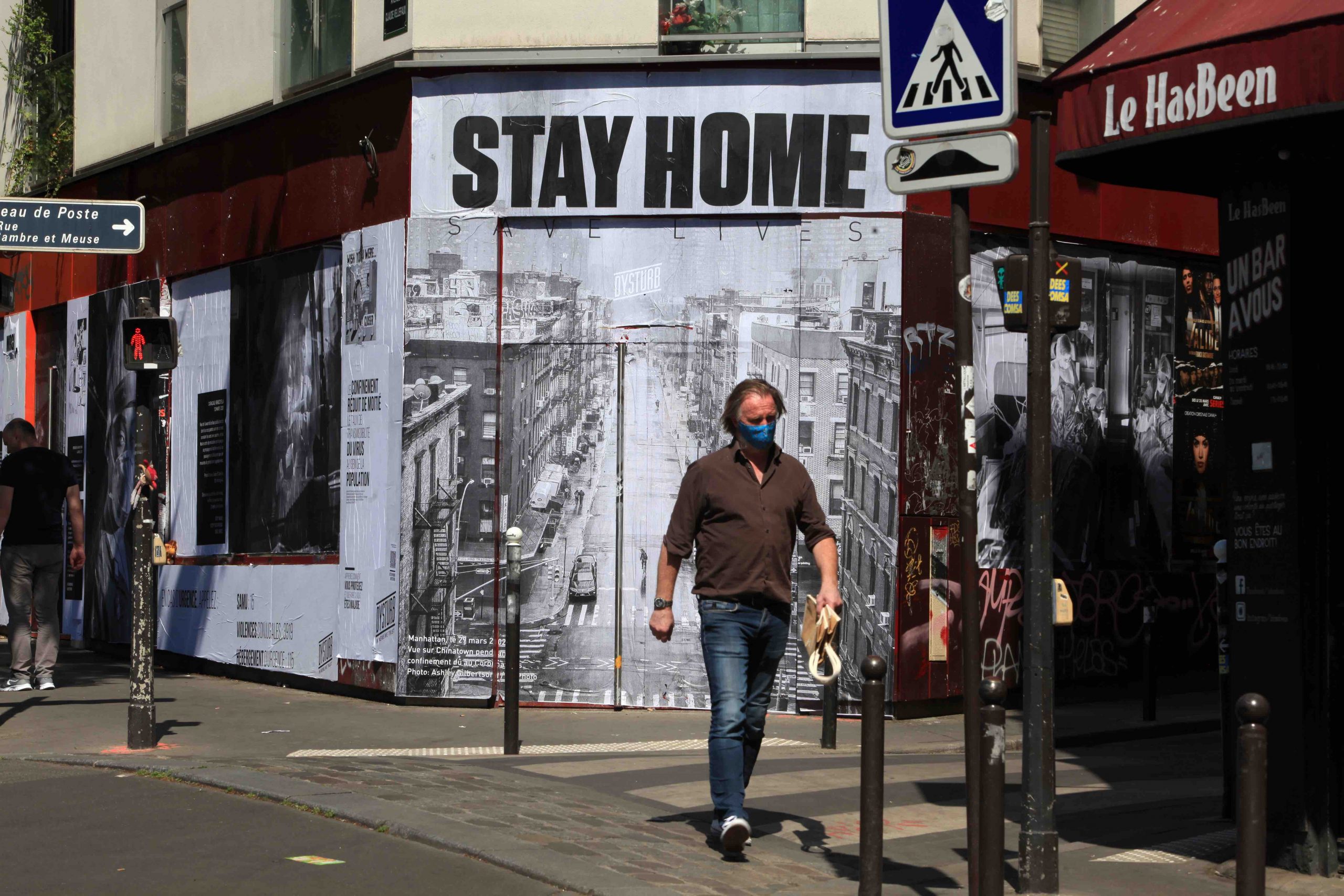 Stay home in Paris, in front of the Saint Louis Hospital. 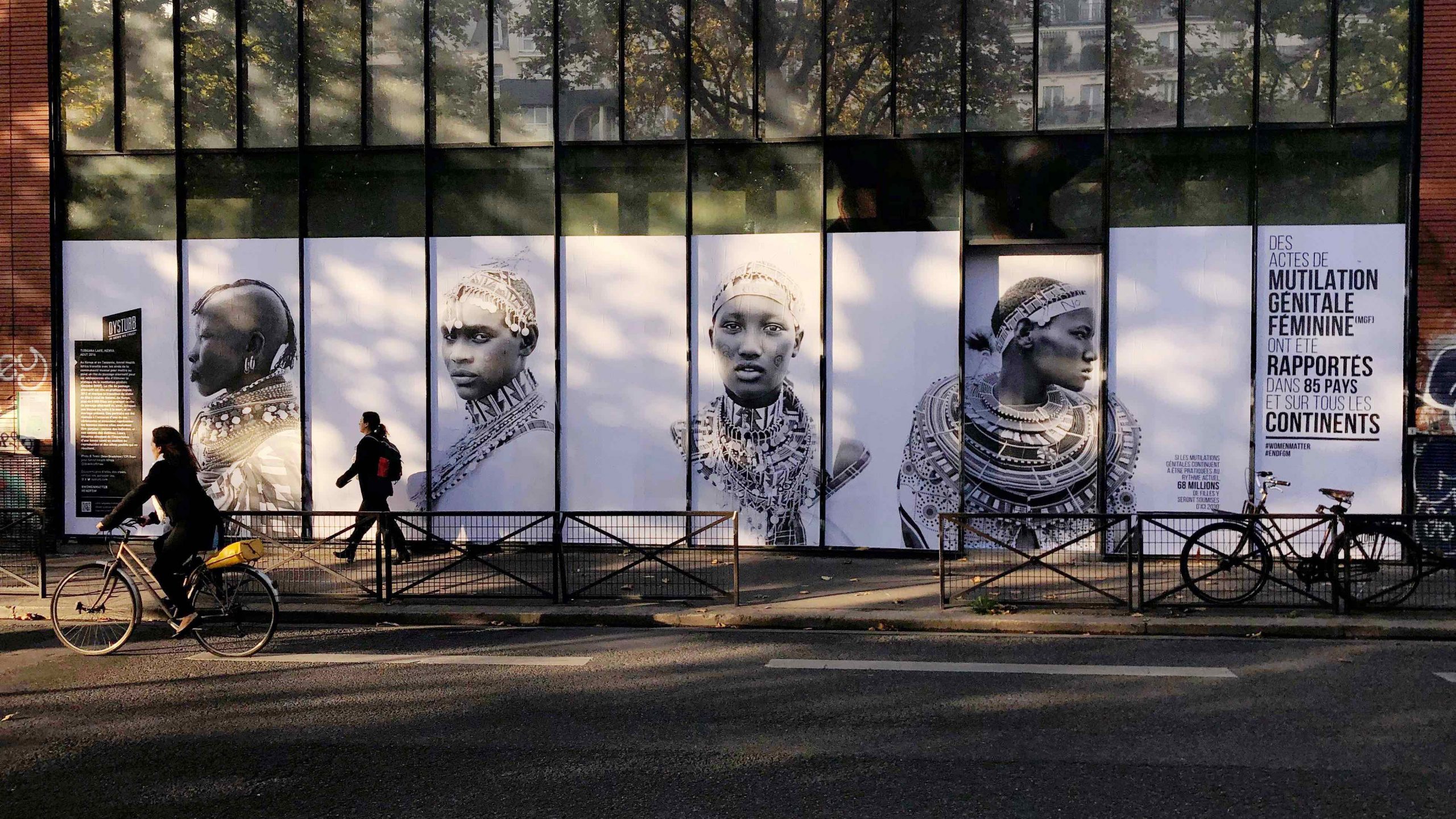 Dysturb is all about public space; sticking big photos with impactful messages around strong causes for all to see. No paywalls, no fees. How did you come up with the idea?
Dysturb Collective: The idea was to find a cheap way to print big pictures. I was coming from the Central African Republic where I’d been covering this huge and dramatic conflict, and I felt that it wasn’t being published enough. I wanted people to know what was going on there. Plus, I grew up with graffiti, skateboarding and a strong connection to urban culture. I knew that this kind of pasting technique could work in a public space. And then we hooked up with our printer, who has supported us since day one – that was vital, too.

You also collaborate with artists, like Jeremyville, as well as photojournalists. Why is that important for you?
Dysturb Collective: We wanted to step out from a spiral where photojournalism projects were mostly talking to the journalism or photojournalism community. That was inspiring and motivating, but one of my ideas behind pasting pictures was to give access to my images to people who don’t read magazines or listen to the news. Looking for a new audience means also looking for people and finding folks who share your values and allowing them to discover one another. Again, we mostly try to reach audiences that are outside of the information bubble.

How have you had to adapt to the crisis? Have your methods had to change? I notice you’ve been very active on your Instagram account.
Dysturb Collective: Our organisation is based in two cities, Paris and New York. Since we couldn’t use the streets during the first few weeks because of lockdown, and also because our printer that’s supported us for many years was closed, we wanted to adapt quickly and keep in touch with our community. We currently have a series of live Instagram interviews with photographers from around the world who are covering the crisis from different angles: its impact on health, the economy, women and the environment. These interviews are archived and will soon be available online as a resource for photographers and the general public. 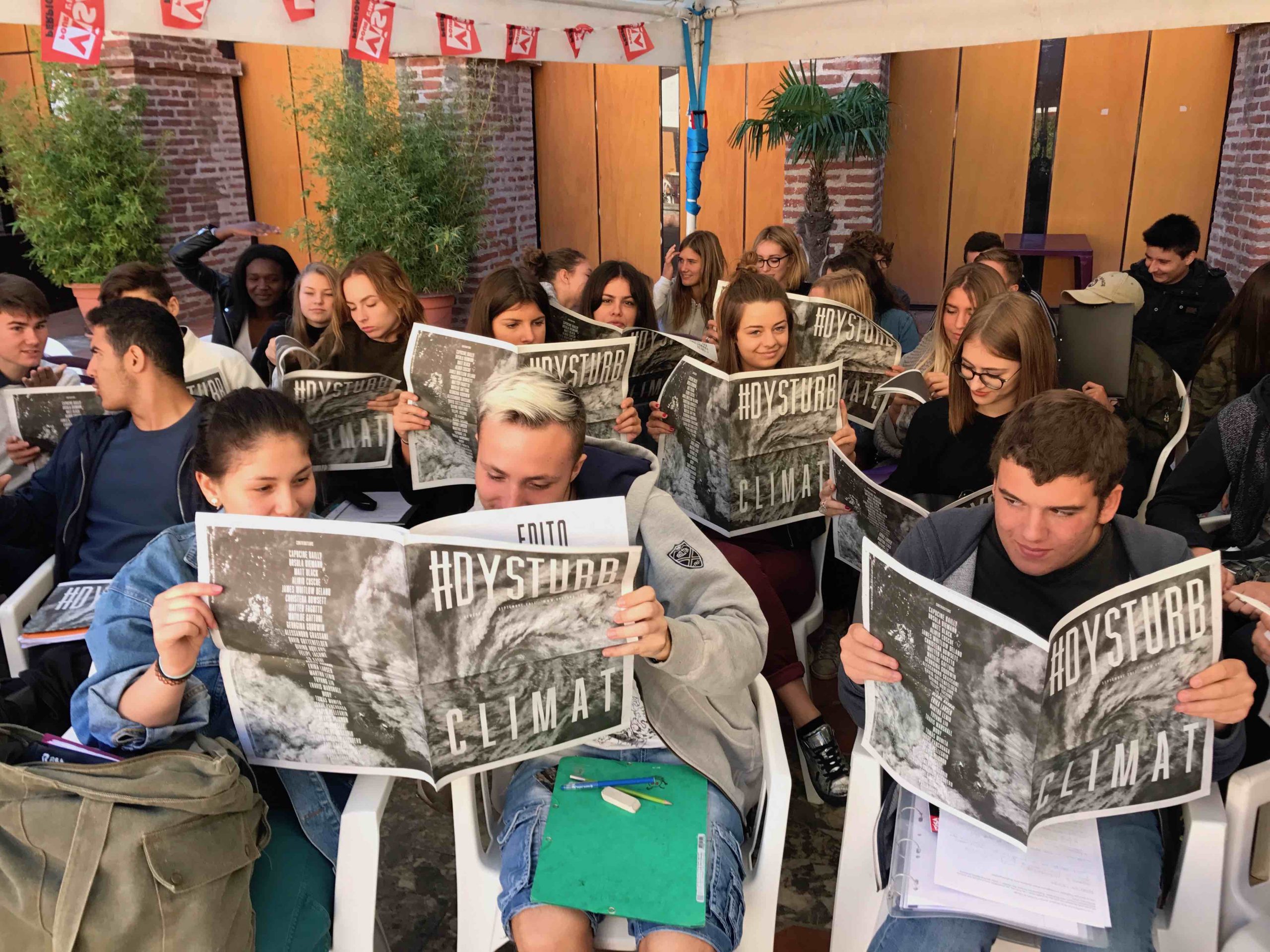 Students discover our first newspaper, CLIMATE, about climate change. We gave away 10k copies to schools and to people in the streets. 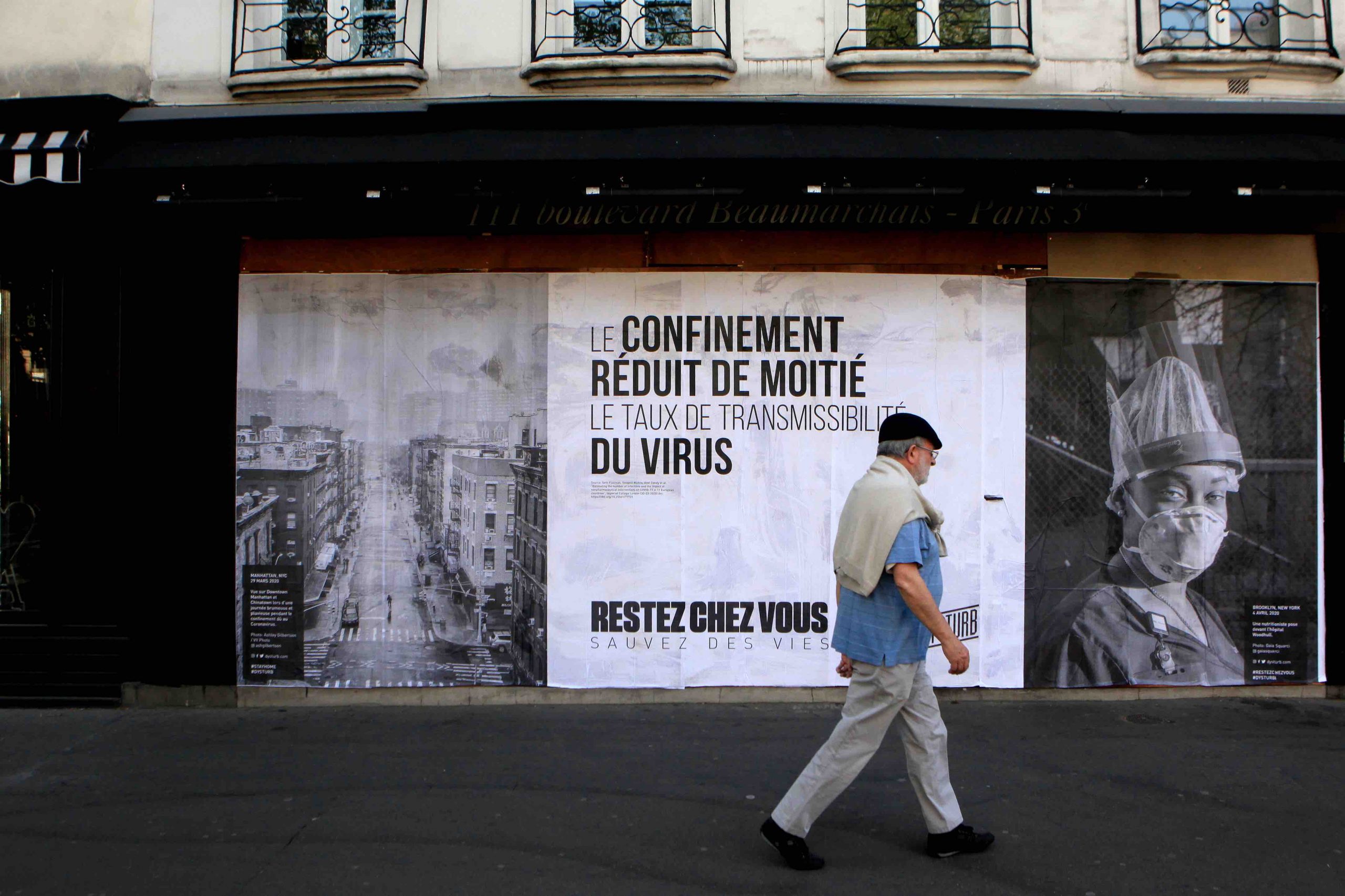 And what’s your take on how governments have reacted to the pandemic?
Dysturb Collective: The system as we know it is broken and things will never be the same. A lot of challenges are ahead of us and, unfortunately, political games are still playing a big part in this crisis. Our motivation is to continue to fight misinformation. It’s an incredible challenge. We see it every day with COVID-19: misinformation is everywhere, and people need to understand what’s going on.

Do you think things are going to change after this?
Dysturb Collective: I try to stay optimistic. But from what I’ve seen from the world as a photojournalist for the last 20 years, I’m afraid this crisis is going to last much longer than people think.

What are Dysturb’s next projects, and where do you see it going in the future?
Dysturb Collective: What we’re looking for these days is more resources to develop our educational kits and our campaigns in the streets. We’re working already with The Everyday Project and the CatchLight Foundation, and we have been awarded by the JSK Fellowship to use photography and illustration to tackle the Covid-19 situation. We are also planning to paste more posters in the coming weeks and to publish our newspaper about women’s rights. 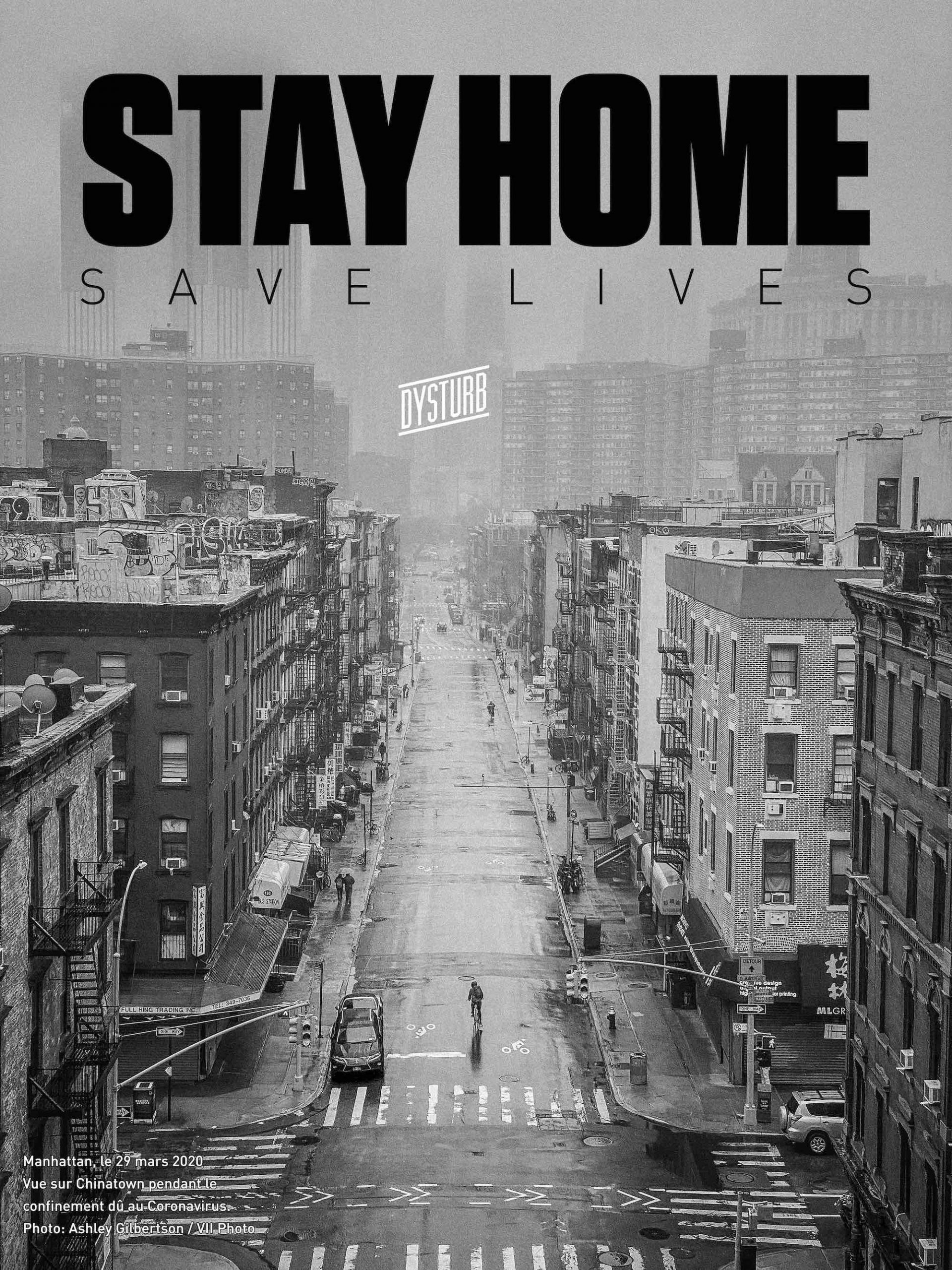 Manhattan, March 29. Photo by Ashley Gilbertson. This image is exactly what’s in our heads when we think about 1980s movies about the end of the world. It’s powerful and at the same time a great and very simple image.

Special thanks to Guillaume Salmon from Tact.

Linkedin
RELATED ARTICLES
OTHER ARTICLES
With the virus now a global health emergency, we must take steps to fight misinformation and demand a swift UK-wide vaccine roll out, writes Phil Samba.
Following the release of his latest album, the rapper talks about finding a new approach to songwriting, attitudes to poverty, and why his music is more than a political statement.
With the UK now set to run out of vaccines, people working in the sex industry – particularly outside of major cities – have been left especially vulnerable, reports Brit Dawson.
We introduce our series spotlighting the voices of people who’ve been impacted by anti-abortion laws and anti-choice protestors.
In the latest instalment of Photographers in Conversation, the creator talks portraiture, platforms and taking inspiration from Little Simz.
After rewriting the indie rulebook with her devastating songs about romantic longing, the singer-songwriter is now imagining a future in which the artist is no longer a product.